10 Years of Andertons TV – Our Most Popular Videos!

To celebrate the last decade of Andertons TV, we’ve compiled a list of our most popular videos from each year since our YouTube channel’s inception. Featuring some classic content that you may expect, there are plenty of surprises too!

We think it’s fair to say that the Andertons Music Co. YouTube channel has come a long way. Since uploading our very first video in February 2010, the Andertons TV channel has grown exponentially in the years that have followed; becoming arguably one of the most popular destinations for online gear demos. With more than 2,500 uploads and counting, we recently broke the 600,000 subscriber barrier too! Okay, it’s not quite a million — but that’s still a lot.

If you rewind the clock by almost 10 years though, you’ll see that the Andertons TV channel had very humble beginnings. And we emphasise the word “very”. From shooting videos in our old offices with a creased white sheet backdrop, to using an advertising board with “Guildford” incorrectly spelt “Guilford” — production value wasn’t so high on the agenda in the early days. But 2010 was a long time ago, so we think we can be forgiven. Heck, Chappers still had long hair back then!

To mark the near 10-year anniversary of Andertons Music Co. on YouTube, we thought it’d be fun to create a top 10 article featuring our most-watched videos. However, instead of creating an “of all-time” list, we’ve gone one better and identified the most popular videos from each year (2010-2019). So brace yourself for some vintage and potentially cringe-worthy Andertons TV clips — it’s gonna be a bumpy ride!

To kick off the list, we’ve got a young and slightly monotonous-sounding Captain Anderton comparing a bunch of micro-sized tube amps from the likes of Vox, Fender, Marshall and Blackstar. While most of the products in this video are now discontinued and unavailable to buy, we think that this clip holds up fairly well sonically — especially with our ex-colleague Jay churning out some tasty guitar licks.

In terms of the video format, the whole comparison concept is still a huge part of the content that we put out today. But in this case, please do excuse the blurry 480p video quality and shaky close-up camera work. Sorry if this makes you feel queasy!

Yamaha THR10 Guitar Amp Demo NOTE: Some people have pointed out the buzzing between playing. The buzzing is caused by a power supply problem on the prototype used here and very early models. Now ships with improved powersupply that solves the buzzing completely. Introducing the brand new Yamaha THR guitar amp! The stylish THR is your third amp! Ideal for practice, jams and taking with you wherever you go thanks to battery operation, the THR is the new standard in guitar practice amps. THR even features built in effects, authentic, advanced tube amp modelling, a USB recording / playback interface and an aux input for MP3 players. Find out more (including the latest prices) by visiting our website http://www.andertons.co.uk/combo-amps/pid22169/cid691/yamaha-thr5-guitar-amp.asp http://www.andertons.co.uk/combo-amps/pid22166/cid691/yamaha-thr10-guitar-amp.asp https://i.ytimg.com/vi/N4OQ0w_q6AU/default.jpg PT15M35S 2011-09-29T19:01:10Z
414845

The Yamaha THR series came out in 2011?! Time flies, especially when literally thousands of these great-sounding, lunchbox-style practice amps have been sold in the time since. But gloating aside, Yamaha’s THR amps are still as cool as they were back in the early 2010s. And with the MkII range released just a few months ago — these amps boast more sounds and effects than ever before.

In this video, the studio (ahem, old warehouse) was decked out with black leather sofas straight from whichever DFS sale was on at the time (UK readers will get the joke) with a matching black backdrop for pure “batcave” vibes. HD is available for this video though!

Pre-Helix and Kemper, BOSS’ multi-FX units were regarded as the best analogue amp imitators around. And in this clip, we have Lee Anderton and Lee Wrathe (‘The Two Lees’, a short-lived double act) comparing BOSS‘ almost-vintage GT10 against the GT100 — the latter of which is still in their catalogue over 7 years later!

Wait, a non-guitar product demo was our most popular video of 2013? Yup, that’s right. Our video featuring the TC Helicon Harmony Singer pedal wasn’t just the most viewed from that year, but is actually one of our most watched videos ever; racking up over 1.3m views!

Back in the day, the Andertons studio was being constantly refurbished and refined. Let’s just say it took a while to get to what we have today! Unfortunately, the “blackout” theme stayed for a while, and in this video it looks like a room that would have been perfect for developing photographs in. Lisa’s green hair brightened the place up a bit though.

The Captain Meets Joe Bonamassa! http://www.andertons.co.uk/electric-guitar-amps/pid31807/cid688/marshall-csjtm-145-1964-andertons-50th-anniversary-1w-head.asp Finally the big reveal.... That's right folks, back in the Autumn of 2013 Lee Anderton, of Andertons Music Co, got to meet one of his favourite guitar players - Mr Joe Bonamassa. The meeting was set up by the guys at Marshall Amplification so that Joe could check out an amplifier that Lee & the team at Marshall had designed & built to celebrate the 50th Anniversary of Andertons Music Co. The amp is called a CS JTM145 & is based upon the kind of amps Marshall were making in 1964 - the year Andertons Music Co first opened. The Custom Shop JTM145 is limited to just 200 pieces & will be built exclusively for Andertons in 2014. Worldwide shipping is available. For the full spec & more information on this highly limited edition & UK made tube head, please click on this link - http://www.andertons.co.uk/electric-guitar-amps/pid31807/cid688/marshall-csjtm-145-1964-andertons-50th-anniversary-1w-head.asp Thanks to all the team at Marshall for making this happen. Thanks to Paul at www.ampaholics.org.uk for his invaluable input Thanks to Joe Bonamassa for making this amp sound about as good as I could ever have dreamed! And thanks to you guys for watching this video & for supporting Andertons over the last 50 years - it means a lot! Cheers Lee Anderton (aka The Captain!!) https://i.ytimg.com/vi/w71tBeuLn2Y/default.jpg PT10M33S 2014-01-06T18:00:01Z
1176517

In one of our earliest episodes of ‘The Captain Meets‘, Lee headed down to Marshall‘s Milton Keynes headquarters to chat with the one and only Joe Bonamassa. In typical JoBo style, the modern blues master turned up wielding a rare vintage guitar — none other than Bernie Marsden’s “The Beast” 1959 Les Paul. Subtle…

Playing through an amp that Lee personally asked Marshall to design (the CS JTM145, limited to just 200 pieces), The Captain certainly hit the jackpot getting someone of Joe’s calibre to demonstrate it. But thankfully, he didn’t insist on having his signature put on it.

Can a synth sound exactly like a guitar? Paul in our guitar department didn't think a keyboard player could match his riffs, but look at his face when he's proved wrong! Thanks Marco Parisi for putting Paul in his place! Roli Seaboard RISE 25 Keyboard Controller - https://goo.gl/e4QkNd ROLI Seaboard Grand Stage 61 note Keyboard - https://goo.gl/WQgPbC For more info on the incredible Roli Seaboard Grand featured in this video head here: http://www.andertons.co.uk/controller-keyboards/pid40627/cid613/roli-seaboard-grand-stage-61-note-keyboard.asp Marco is using the Jazz Guitar preset in Native Instrument's Kontakt with the Guitar Rig effect plugin for amp and distortion effects. https://i.ytimg.com/vi/iSko8vHOf8g/default.jpg PT4M20S 2015-07-23T17:04:41Z
1577762

The best ear in the industry? Quite possibly. In this immensely popular video (our most viewed ever in fact), Paul from our guitar department tried to see if Marco Parisi from ROLI could perfectly imitate his riffs on a RISE 25 keyboard controller. The results were staggering, to say the least. Guitarists take note: keyboardists are probably better than you.

It’s probably unsurprising that our most viewed ‘Sound Like‘ video is the Metallica episode. They’ve been going for almost 40 years, yet they’re still selling out (*cough* Load/ReLoad *cough*) stadiums, attracting new fans and inspiring even the latest generation of guitar players.

As Rabea accurately stated in the video: “the most important element of the entire rig is the wah pedal”. Naturally, he wanted to use all of the wah pedals in our cabinet to replicate Kirk’s lead guitar sound, but unfortunately he would have exceeded the tight £1,500 budget. He also doesn’t have 10 feet. Sad but true.

For more information on capturing Metallica’s guitar tones, check out our ‘Sound Like Metallica‘ blog.

Were there any commercial benefits to this video? Absolutely not, but this still remains one of the most entertaining and watched ‘Chappers & The Captain‘ episodes on Andertons TV. And there are many!

As we know, Rob often dabbles with high-gain whereas Lee is far more traditional when it comes to his tonal choices. It’s therefore fair to say that both Chappers and Lee are fairly predictable when it comes to the kind of gear that they like. That’s why in this video, the fellas picked out possibly the most “anti-them” equipment they could find in-store. Hilarity ensues…

Is Steve Vai our most high-profile ‘The Captain Meets’ guest so far? We think so, or at least until we kidnap John Mayer and force him to talk to Lee for an hour. Perhaps unsurprisingly, our interview with the legendary virtuoso has garnered hundreds of thousands of views — because frankly, who doesn’t love Steve Vai?

Unveiled at the NAMM Show earlier this year, Fender’s Acoustasonic launch sparked a lot of debate. It’s design is certainly divisive, and as one of our viewers kindly pointed out — it looks like a “Telecaster with a cupholder.” But looks aren’t everything, as Fender’s Acoustasonic Teles are incredibly well-engineered acoustic/electric hybrids that sound simply divine.

In fact, this video featured arguably one of the tastiest opening jams ever recorded in the Andertons TV studio. Lee’s improv was on point, while Danish Pete was rocking some bold double denim. Fortunately, he’s just about cool enough to get away with it. 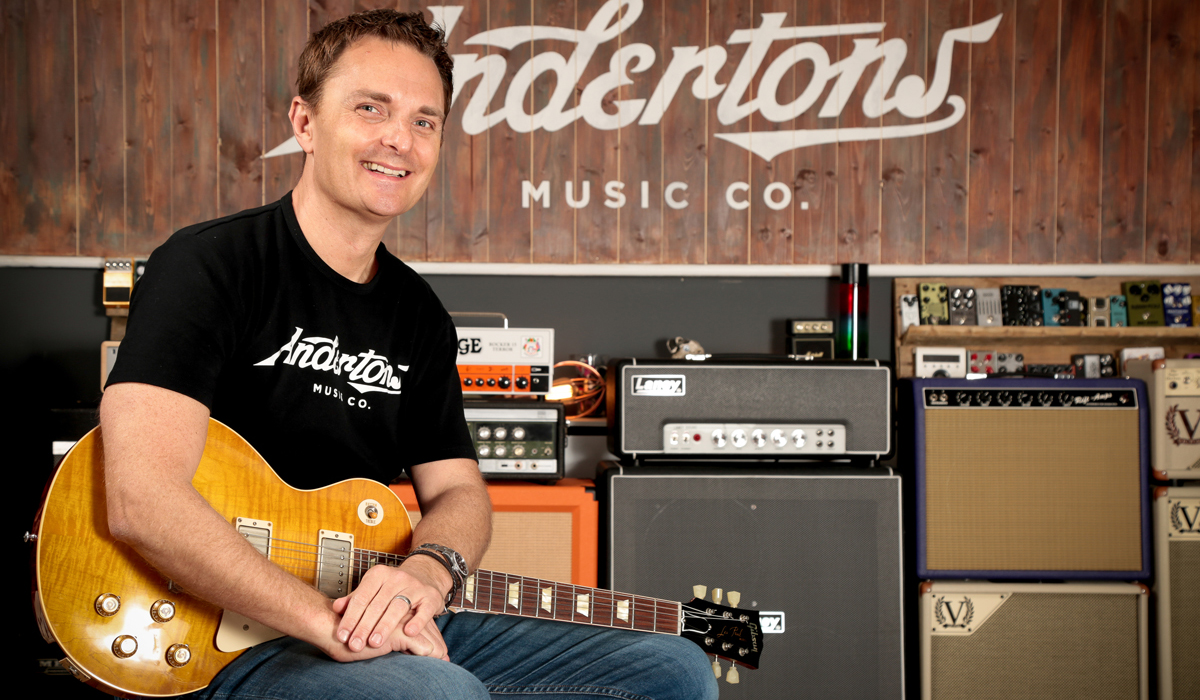 From everyone at the Andertons Team, we want to say a huge thank you for tuning into our YouTube channel. Whether you’ve been subscribed since the very beginning or have recently started following us, we value every single view, comment and interaction. Here’s to another 10 years of Andertons TV!