Sam Bell is making a name for himself as one of the most versatile and proficient guitarists in the UK. We caught up with the mighty-talented chap to chat about making it in the music industry and his weapons of choice!

For those who aren’t familiar, could you introduce yourself?

My name is Sam, I’m a freelance Guitarist and Artist. I write my own quite varied instrumental material, I write and play in the Progressive Metal Band Mask of Judas. I’m also a Lecturer at Waterbear in Brighton and play various session gigs around the UK as a sideman, production shows and of course the functions thing!I write lesson columns online for Premier Guitar Magazine and Guitar Interactive Magazine, I have also released a handful of instructional DVD’s with LickLibrary. 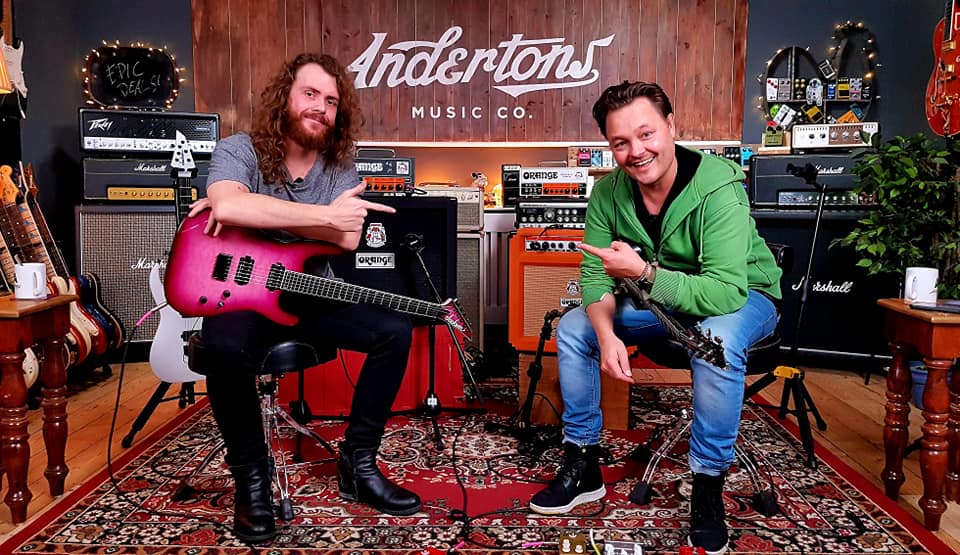 I have loved music since I was very young and I picked up a Guitar when I was around 5 or 6 (people tell me) but it wasn’t until I was 17 that I started to really put some productive time into learning about the Guitar, Music Theory, Technique and Song writing.

Your diverse style ranges from technical metal to jazz fusion. Do you have to consciously switch between styles, or are the lines often blurred?

It’s all blurred to me, I feel strongly that music is universal, the guitar is a tool for playing music. And whilst there are very obvious stylistic traits that we musicians can get stuck into when playing a particular style, I’d say that many styles aren’t that far apart. I was fortunate enough to be brought up around lots of different styles and I get a lot out of music in general. So for me as an Artist and a Sideman it all crosses over and I love it. It might be a generalisation, but all the notes are the same, it’s the approach and attitude that changes the meaning of those notes.

Who would you cite as an influence when it comes to guitar playing?

I love the arrangement of great pop tunes, I get a huge kick out of how the guitar works and sits in all musical situations. It’s easy to forget, especially the way guitar is taught that the guitar is an accompaniment instrument, guitar solos only happen 5% of the time in the whole of music (if you’re lucky!) I get inspiration from hearing great session players in all kinds of music, I love hearing how they work. It makes me very happy playing this way as well.

As far as Guitar Players and Super Guitar stuff goes I’d have to say that there are a few guitarists who I have come back to at many points in my playing career: Paul Gilbert, Allan Holdsworth, Larry Carlton, Yngwie Malmsteen, Paco De Lucia, Greg Howe, and Guthrie Govan. I started out because of Buddy Holly, Hendrix, Mark Knopfler and listening to a lot of Thin Lizzy and Meatloaf. I also get a lot of inspiration from my Guitar playing friends and musical colleagues as well, Nick Johnston, Tom Quayle, Rick Graham, Mika Tyyska. The list could easily go on for days, I love Guitar!

How did you discover the 8-string?

I was playing a lot of 7 string guitar back in 2007, I had joined a local band called Mask of Judas. We used the 7 strings a lot, but when the other Guitarist left I took over the reins of song writing, I really dug what Tosin was doing on the 8 string. So I bought an 8 string, and I felt quite liberated. It was new territory for me, so I approached it on my own terms, there was no worries about what had come before at that point. Tosin is a unique individual on the instrument and that inspired me to approach it with my own intentions whilst not being too influenced by other people. I approached it much more like a Piano, you will be able to hear my works on the latest Mask of Judas album ‘The Mesmerist’. 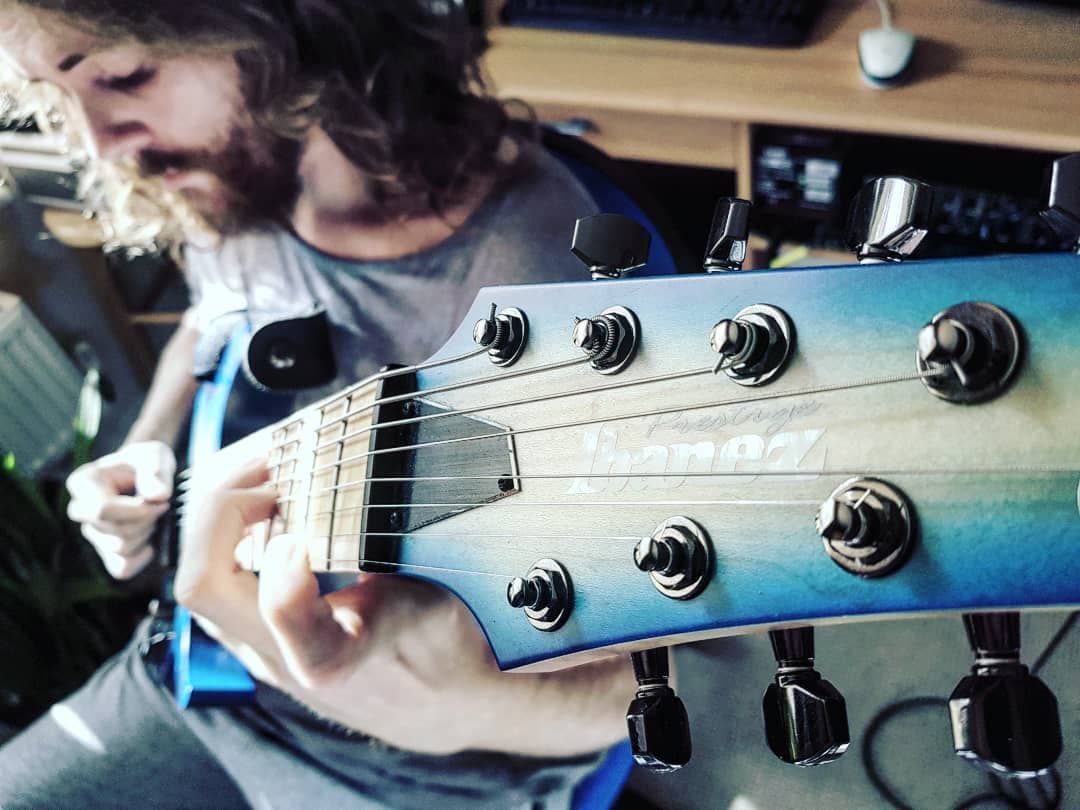 What’s your experience of / opinion on modelling amps?

I used to be really against it, I’ve always had valve amps. Even though I had been using the early POD’s for home recording, I would have never have dreamed of using one live until I started playing production shows where there isn’t much space or time to get your sound right for the show. I decided it was time to really give the Digital thing a go and now I have done over 300 shows with my Helix LT and it has done me proud. It’s so convenient, sounds great consistently and I can get on with the playing and do my job! Having said this, I still love going through a real amp set up when the time is right!

You’ve used Ibanez & Laney gear for quite some time. What drew you to those brands in particular?

A lot of my early influences have used Ibanez, Allan Holdsworth, Paul Gilbert, John Scofield, Frank Gambale etc. I had always played S-Type Guitars since a young age and the Ibanez thing was a natural progression for me. I enjoyed the playability of the instruments and the fact that they are pretty versatile for most modern playing situations. Laney distribute Ibanez in the UK and when I became an Official Ibanez Artist it seemed only right to check out the Laney stuff, I really love their Lionheart range of amps and some of the home recording stuff such as the new IRT-SLS which I am using a lot for my upcoming EP.I feel very fortunate to work with both companies.

Are you a pedal person? Any pedals you have a soft spot for?

I love pedals, of course I use the Line 6 Helix LT for most of my work now. But I do own quite a few pedals, I own a Wampler Pinnacle Deluxe, Wampler Tape Echo, they are great. I also have a Pro Tone Pedals Deadhorse Overdrive which is like an 808 TubeScreamer on Acid.

As for soft spots for certain pedals, I really love Chorus. I’ve got a Providence Anadime Chorus, I guess this comes from my influence of listening to a lot of 80s pop and rock. I love what chorus can do for fusion players like Holdsworth and Scofield, and how Guthrie Govan uses it in The Fellowship; he is always tweaking it throughout the set to get different tones. I also love hearing Chorus tones used by players like Johnny Mar and Andy Summers. I’d also love to own a JHS Angry Charlie pedal. That thing is off the hook, one can only dream!

Electricity-permitting, what would be your desert island setup?

The brand new Line 6 Helix Stomp of course! That’s all I’d need, with a decent pair of head phones id be away! Oh and of course my Ibanez AZ 2204F-TAB which is an incredibly versatile guitar. 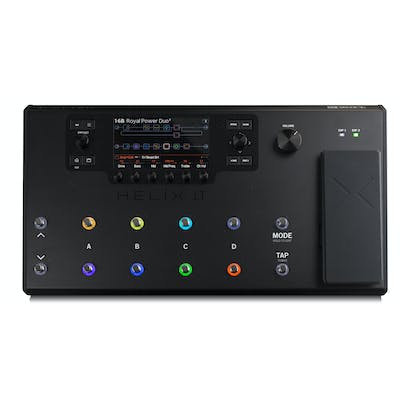 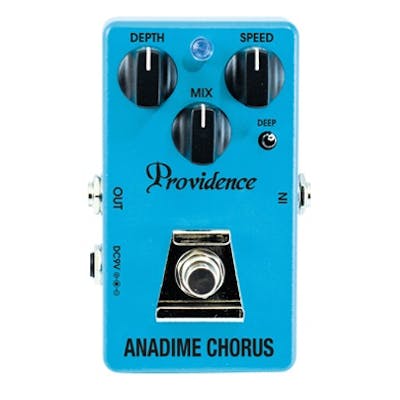 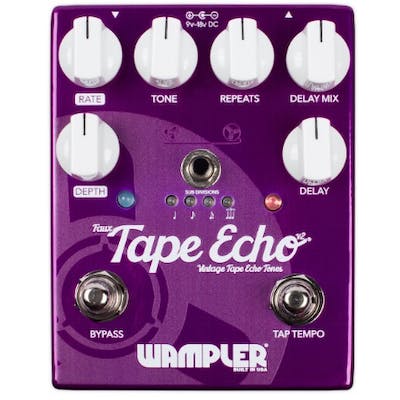 Obvious question, but do you maintain any sort of practice regime?

I often spend time working on fretboard visualisation, transcribing (solos, riffs, chords etc) and if I can Improvisation. These subjects cover most things I need as a guitar player. I am quite relaxed about it in terms of ‘what’ I practice. Of course as a session player there are a lot of times where I am preparing for a gig, which might mean learning tunes or brushing up on some chart reading. So often I am practicing for what is coming up, if nothing is coming up (or even if there still is something coming up) I practice what interests me! I often focus on practical stuff that I know I can apply to my own music and others music.

When I was 18 I used to practice crazy chromatic passages with all alternate picking to a metronome in 5 minute increments, I then soon realised I was feeling down, smelt funny and had no gigs. So I stopped that and spent time working on my musicianship and focusing on techniques and areas that reflected what music I was listening to. Then suddenly my playing started changing, I slowly was able to have more control over what I said on the instrument and people started noticing. Most importantly this lead to me enjoying practice much more which only added to the snowball effect.

You’ve spoken in the past about making a living from music. With hindsight, is there any advice you’d give your younger self looking back?

Not that there is anything wrong with it at all but I wish I hadn’t stuck around teaching guitar in primary schools as long as I did, it taught me a lot, but I wish I had got out doing more production shows at an earlier age. I didn’t feel like I had much freedom around that time to move and do other things however in hindsight I really did have a lot of freedom. I also wish I had spent more time on sight reading back in college, I am a lot better now than I was, it’s still work in progress. 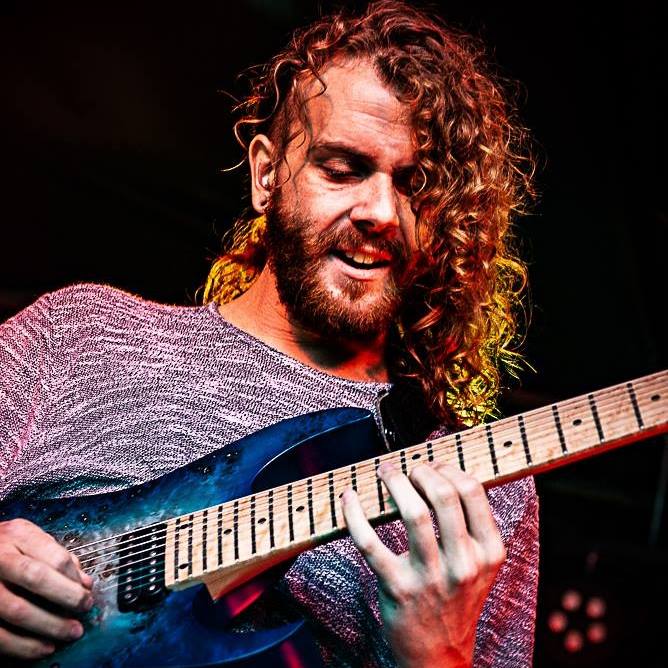 However, having said this, I have no regrets, I am very grateful every day that I get to play guitar to pay the mortgage. And even though I know deep down I should be a better player for my age and experience, I am enjoying the progress I am now making and the opportunities that I have had the absolute pleasure of being part of.I have met some incredible and inspiring people, that aspect of being a professional musician alone is something to really appreciate.

Do you have any other essential advice for musicians looking to take the leap?

Keep a very open mind, be mindful of yourself and others. Music doesn’t owe anyone anything, it can be a bit tough, but it’s only as tough as you make it for yourself, you do have a certain amount of control over what you do. Don’t be too quick to judge others, be kind to yourself and be playful with music.

I am looking for gigs, so if anyone needs a guitarist hit me up! I do have some awesome things in the pipeline. One I can’t say too much about just yet, but it’s educational and has something to do with lots of pages. The other is my new solo EP and of course Mask of Judas are doing some tours next year (UK/Europe). Aside from that I will be cracking on with Lecturing at and contributing to the courses at Waterbear, practicing a lot, playing out as much as I can and seeing where else this crazy journey takes me!

Enjoyed reading this interview? Head over to the industry section of our blog for more groovy behind-the-scenes content! If you want to find out more about Sam’s work, check out the following links:

Here’s Sam demoing some gnarly Jackson guitars with our very own Danish Pete on Andertons TV: