Grammy Award winning bassist Marcus Miller is regarded as one of the most influential artists of the last thirty years. His distinct playing style has been heard on countless recordings and he has been dubbed one of the most significant bass players in jazz, fusion, R&B and soul. In this blog, we delve into Marcus’ decorated career, playing style and collaboration with US guitar manufacturer Sire.

Even if you’ve never heard the name Marcus Miller, there’s a good chance you’ve heard his playing. If you’re a fan of funk and soul music, you will most definitely be familiar with his work! Born in New York in 1959, William Henry Marcus Miller Jr. (Marcus Miller for short) is a composer, producer and multi-instrumentalist, but is best known for his work on bass guitar. 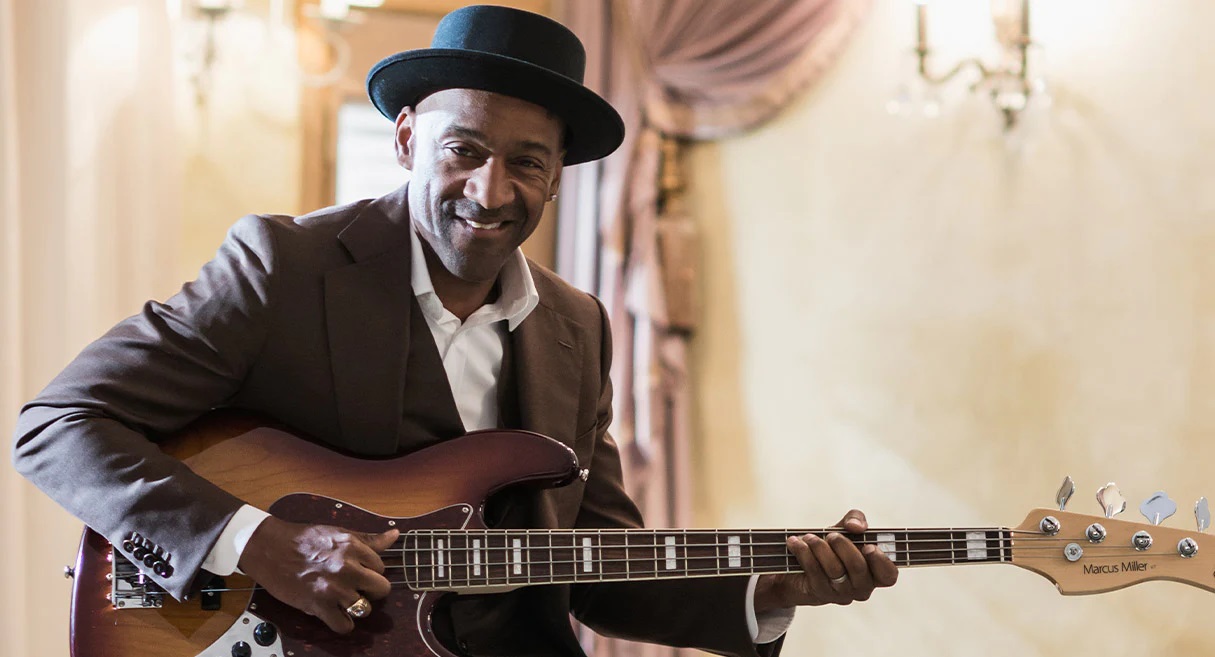 With a decorated career spanning some thirty years, Marcus has worked with some of the biggest names in the business. Marcus worked primarily as a session musician for over fifteen years, during which he regularly worked as an arranger and producer. He was also a member of the famous Saturday Night Live band. He would later become the band’s musical director, solidifying his reputation as one of the hottest players in town.

Marcus has appeared on over five hundred recordings and his list of artist credits makes for some impressive reading! During his career, Marcus has played for Aretha Franklin, Luther Vandross, Michael Jackson, Frank Sinatra, Elton John, Bill Withers, Mariah Carey and Beyonce, to name a few!

In the ‘80s, Marcus moved away from session work and branched out into a solo career. During this time, he released two albums, Suddenly (1983) and Marcus Miller (1984), on which he served as songwriter, producer and instrumentalist. He has since released a further ten solo albums! Marcus won a Grammy Award for “Best Contemporary Jazz Album” for his Seventh solo album M2!

Towards the end of the ‘90s, Marcus joined the supergroup Legends, in which he played bass clarinet and bass guitar alongside Eric Clapton, Steve Gadd, David Sanborn and Joe Sample. The band appeared at a number of major jazz festivals and once again showcased Marcus’ exceptional musical ability and repertoire. Marcus formed another supergroup, SMV in 2008, with fellow bassists Victor Wooten and Stanley Clarke, producing their first album Thunder in 2011.

If all this wasn’t enough, Marcus Miller is also an accomplished film composer, writing numerous scores for directors including Chris Rock and Reginald Hudlin! Some of his highlights include An American Love Story (1999), Save The Last Dance 2 (2006), Good Hair (2009) and most recently, the Disney film Safety (2020).

We were lucky enough to be joined by Marcus in our studio back in 2019, where he talked about his career and influences. Check out the video below.

When you listen to Marcus Miller play, what you’re hearing is an amalgamation of different musical styles and techniques, from an array of different genres. His playing almost transcends the traditional limitations of an electric bass. Marcus primarily uses the “double-thumb” technique, with which he is able to produce percussive slap-style lines. It was this technique that earned him the nickname “The Thumbslinger”! He also utilises staccato notes and even silence to make his parts pop!

Marcus has always attempted to tell a story with his playing, ensuring that it is appropriate for the song and sits in the right space sonically. He is renowned for combining traditional R&B and soul bass lines with solo lines you would expect to hear in jazz and fusion. It’s no surprise then that he is always in such high demand!

Marcus Miller was a long time user of Fender basses, with his famous ‘77 Jazz Bass in Transparent Blonde being his go to guitar for session work. Fender recognised Marcus’ contribution to music with a signature Jazz Bass model in the late ‘90s.

Ever evolving though, Marcus began endorsing Sire basses in 2015, a company with whom he has an expansive line of signature models. Here at Andertons, we absolutely LOVE Sire basses and believe that they are among the best basses you can buy for the money.

During his first meeting with Sire, Marcus was presented with a number of prototype basses which he immediately fell in love with. So much so in fact, that he and Sire came to an agreement there and then. If Sire could produce a range of high-quality instruments whilst keeping costs low, he would put his name on them as a stamp of approval! True to his word, he did just that! In his own words, these were “really good quality basses for not a lot of money!” 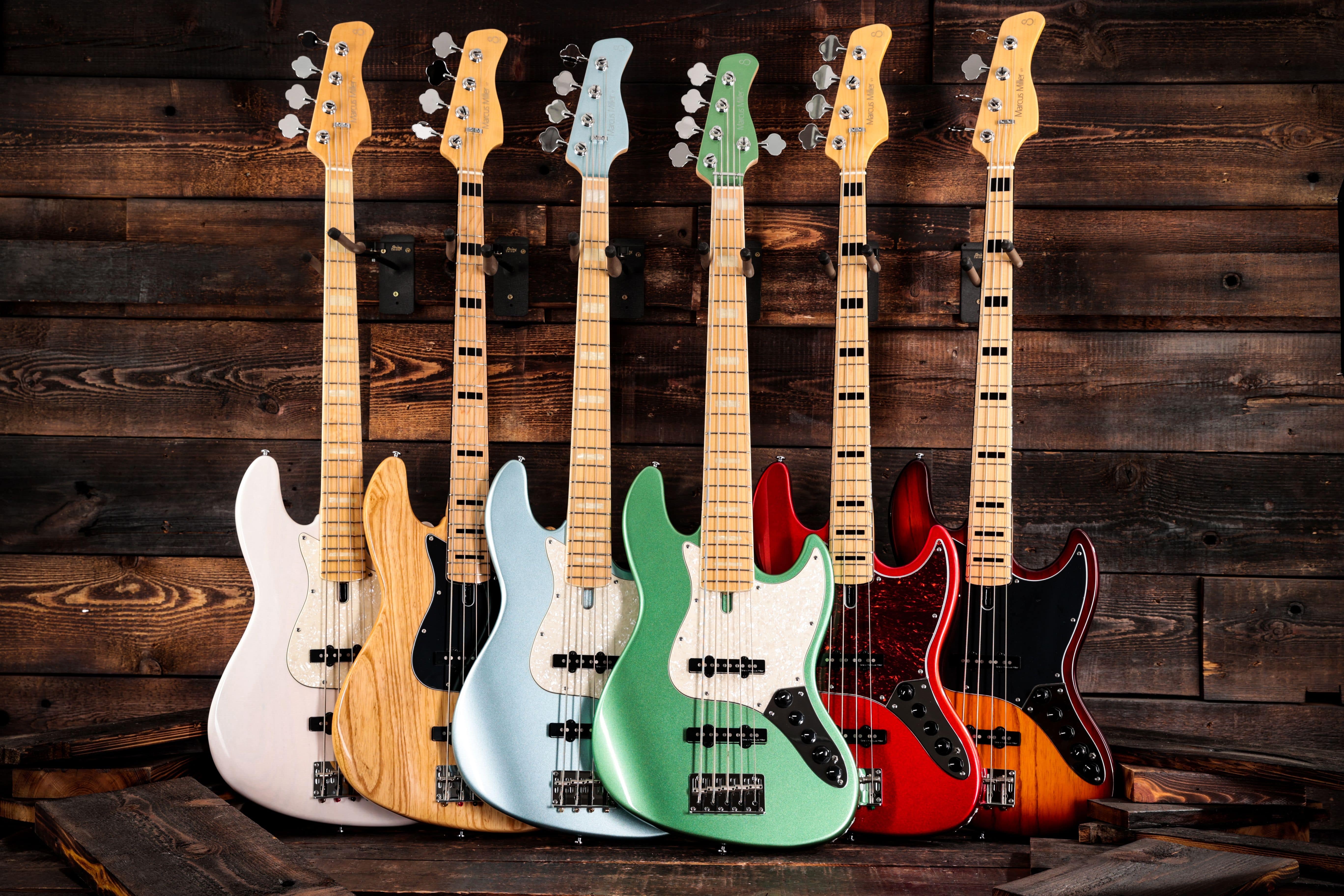 Marcus’ favourite basses from the Sire line up are the V7 Series models. Drawing inspiration from the classic Jazz Bass with which he is so familiar, V7 basses are packed with modern features. Featuring premium tonewoods, rolled fingerboard edges, powerful EQs and signature pickups, Sire V7 Series basses far exceed their price tag. Think of them as custom shop quality without the custom shop price tag!

As we mentioned, the Sire Marcus Miller range of basses is vast, featuring both traditional and modern instruments to suit any playing style. You’ll find four-string, five-string, fretted and fretless models so be sure to check out the whole range!

Marcus was kind enough to talk to us about his V10 range of basses on his visit to the studio in 2019.

Marcus Miller Shows Off His Bass Range! - Sire's Best Basses Yet? Marcus Miller is here to tell us all about the new range of bass guitars he designed, the Sire V10s. Everything from the neck to the pickups has been designed in collaboration with Marcus Miller, the end result is an amazing bass! | https://tinyurl.com/2ahobdzy » Full Range of Sire V10 Basses | https://tinyurl.com/2ahobdzy » Full Range of V Basses | https://tinyurl.com/225dnu4h » Full Range of Sire Basses | https://tinyurl.com/28v87c6m Always check the website for accurate and up-to-date pricing and product specifications! 🎥 If you live outside the UK check out this video on how to order from Andertons! » https://www.youtube.com/watch?v=Iu_zvwZ--Hc ⏰ Timestamps ⏰ » 0:00 Intro Jam » 1:35 New Sire Basses with Marcus Miller » 1:50 Talking About the New Necks! » 4:36 New Pickups! » 11:18 Thoughts on the Bass » 15:25 Final Overview 📱 Why not give us a follow on our social channels? » Instagram | https://www.instagram.com/andertonsmusicco » Facebook | https://www.facebook.com/andertons/ » Twitter | https://twitter.com/andertonsmusic 🎸 Want To Jam Along? Check out our Backing Tracks! » https://andertonstv.bandcamp.com/ 👕 Buy A T-Shirt 👕 | https://tinyurl.com/vdq7rmg You've watched the videos & seen the store, now join the Andertons Family with our exclusive, official merchandise! With free UK delivery on all orders containing only a T-Shirt, Hoodie or Jumper & super low international shipping costs, there is no better time to be an Andertons fan than now! Make sure to subscribe to Andertons TV for more great videos! Andertons Guitar & Bass YouTube Channel: https://goo.gl/kRJCpb Andertons Synths, Keys & Tech YouTube Channel: https://goo.gl/ns172M Andertons Drummers YouTube Channel: https://goo.gl/9yKSS9 Andertons Shopping Website: https://goo.gl/TPsG2Q #Andertons #bass #marcusmiller https://i.ytimg.com/vi/2CecsD7QXz4/default.jpg PT16M28S 2019-07-10T09:30:47Z
117887

Whether you’re a fan of his music or not, it’s hard to ignore Marcus Miller’s impact on contemporary music. Few players can match the sheer number of recordings and accolades to his name. His collaboration with Sire has brought affordable, quality basses to the masses and for that, we can all be thankful! Do yourself a favour and get down to Andertons and try out a Sire Marcus Miller bass for yourself. You won’t be disappointed!

If you enjoyed this article, check out more Industry articles here.