Takamine – From Humble Beginnings to the World Stage

Takamine have been building acoustic guitars since the late 1950's and have become one of the industry's leading names. In this blog, we look at their meteoric rise from humble beginnings to the world stage.

When you think of Japanese manufacturing, images of ultra high-tech production lines and autonomous robots working in perfect harmony immediately spring to mind. Whilst this may indeed be the case for some Japanese companies, it couldn’t be further from the truth for Takamine.

Skilled artisans and hand-made craftsmanship have been staples of Japanese culture for centuries and they remain firmly rooted in Takamine’s DNA to this day. From humble beginnings to the world stage, Takamine has earned its reputation as one of the finest and most respected acoustic guitar makers on the planet.

Founded in 1959, Takamine began as a modest, family run instrument workshop nestled in the foothills of Mount Takamine in central Japan. Three years later, the company would be renamed Takamine Gakki Ltd, after the mountain on whose foothills it was built. It was perhaps a fitting metaphor as Takamine would have a steep, upward climb if they were to compete with the leading American manufacturers like Martin and Gibson. 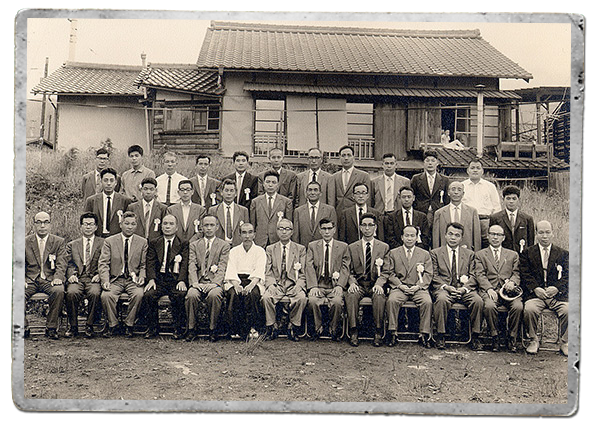 By the end of the 1960s, Takamine had grown to sixty employees and become a leading manufacturer of classical guitars and mandolins. In 1968, respected luthier (and Takamine’s future president) Mass Hirade was brought in, bringing with him a number of design and manufacturing improvements. Hirade’s name would later be added to a number of classical guitar models to honour his contribution.

On becoming the company president in 1975, Hirade set out to make Takamine guitars available to the masses, with dreadnought and OM models starting to appear worldwide. Hirade’s ambition and foresight would be the catalyst to Takamine’s success over the next decade and beyond. From a fledgling company to a major player in the acoustic world, Takamine was ready to not just climb the mountain, but conquer it!

In 1978, Takamine would start working on their new under-saddle Palathetic pickup system, a design that would revolutionise amplified acoustic guitar design. The concept of electro-acoustic guitars had been seen as early as the 1920s, but the primitive systems failed to accurately capture the subtle nuances of the guitar and subsequently fell by the wayside.

By utilising six oversized ceramic elements, Takamine’s Palathetic pickup would capture the signal of each string individually, as well as the harmonic content of the soundboard. The result was a pure, natural, feedback-free tone that sounded just as the guitar did when played acoustically, only louder. This ground-breaking development was literally music to the ears of musicians who has previously struggled with mic’ing guitars and the inherent feedback that came with it!

In 1979, Takamine debuted their very first electro-acoustic model, the PT-007S, which became the foundation on which all subsequent models would be built.

1987 saw Takamine celebrate their twenty fifth anniversary with the release of their first limited edition model, the EF25. Featuring a Sitka Spruce top and Takamine’s game-changing Palathetic pickup with a three-band slider controlled parametric EQ, the EF25 was adorned in a classy glossy white finish, beautifully offset with golden rings around the sound hole.

Further developments would be seen a year later with the release of the parametric equalizer (later resigned as the AAP preamp) which allowed players to shape and tweak their tone to their liking. An innovative external battery box and replaceable preamp pack was developed the following year, which would allow players to replace the pickup system in their lesser guitars with a new, improved Takamine system!

Takamine celebrated another significant anniversary in 2012, this time their fiftieth. A limited edition T50TH model was released to commemorate this landmark achievement with only fifty units made worldwide. The T50TH featured a AAAA grade Spruce top, solid Cocobolo back and sides and an Ebony fingerboard with a stunning vine inlay running top to bottom. If ever there was a guitar that showcased Takamine’s craftmanship and attention to detail, this is it!

Takamine’s popular G-Series delivers premium build quality and craftsmanship at an accessible price point. With a wide range of guitars to suit any genre of music, the G-Series represents incredible value for money whilst boasting the latest in preamp design for optimal performance. From the top level 90 Series, to the ultra-affordable 10 Series, the G-Series consists of some of the most popular guitar shapes in history.

The Takamine GD90CE-MD is a classic dreadnought featuring a Venetian cutaway, solid Sitka Spruce top and Madagascan Rosewood back and sides. Boasting powerful projection, a balanced tone, timeless looks and proprietary TP4TD electronics, the GD90CE-MD is the perfect guitar for belting out some big, open chords!

For fans of a more modern design, the GN51CE features Takamine’s original NEX body shape which has a “scaled down jumbo” quality to it. The resulting tone is well balanced with a healthy amount of bottom end thump as well as a chimey top end. The NEX body is comfortable to play with a silky tone that complements vocals perfectly.

For players with a smaller frame or those who simply prefer a smaller bodied guitar, the Takamine GY11ME is a fantastic option. Featuring all Mahogany construction, this “New Yorker” (parlour) sized acoustic delivers a rich, articulate sound with an incredible definition in the mid-range. 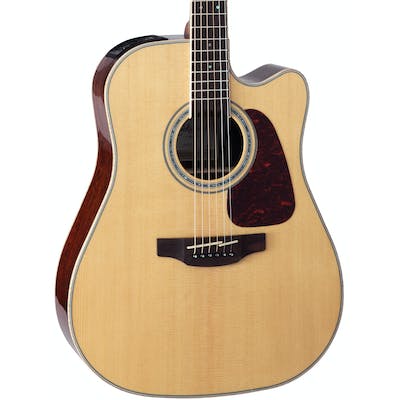 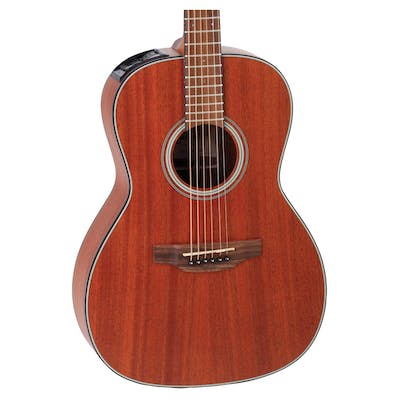 Check out the full range of Takamine G-Series guitars available at Andertons today!

The list of guitar heroes and multi-platinum recording artists playing Takamine guitars makes for some impressive reading. From Rock to Pop, Blues to Country, Takamine guitars have been seen and heard on countless stages and recordings over the years. Let’s take a look at some of the most recognisable players below!

1990 saw the release of the Takamine SW341-SC Steve Wariner model, which represented a major milestone for Takamine as it was to be the first in a long line of signature models. 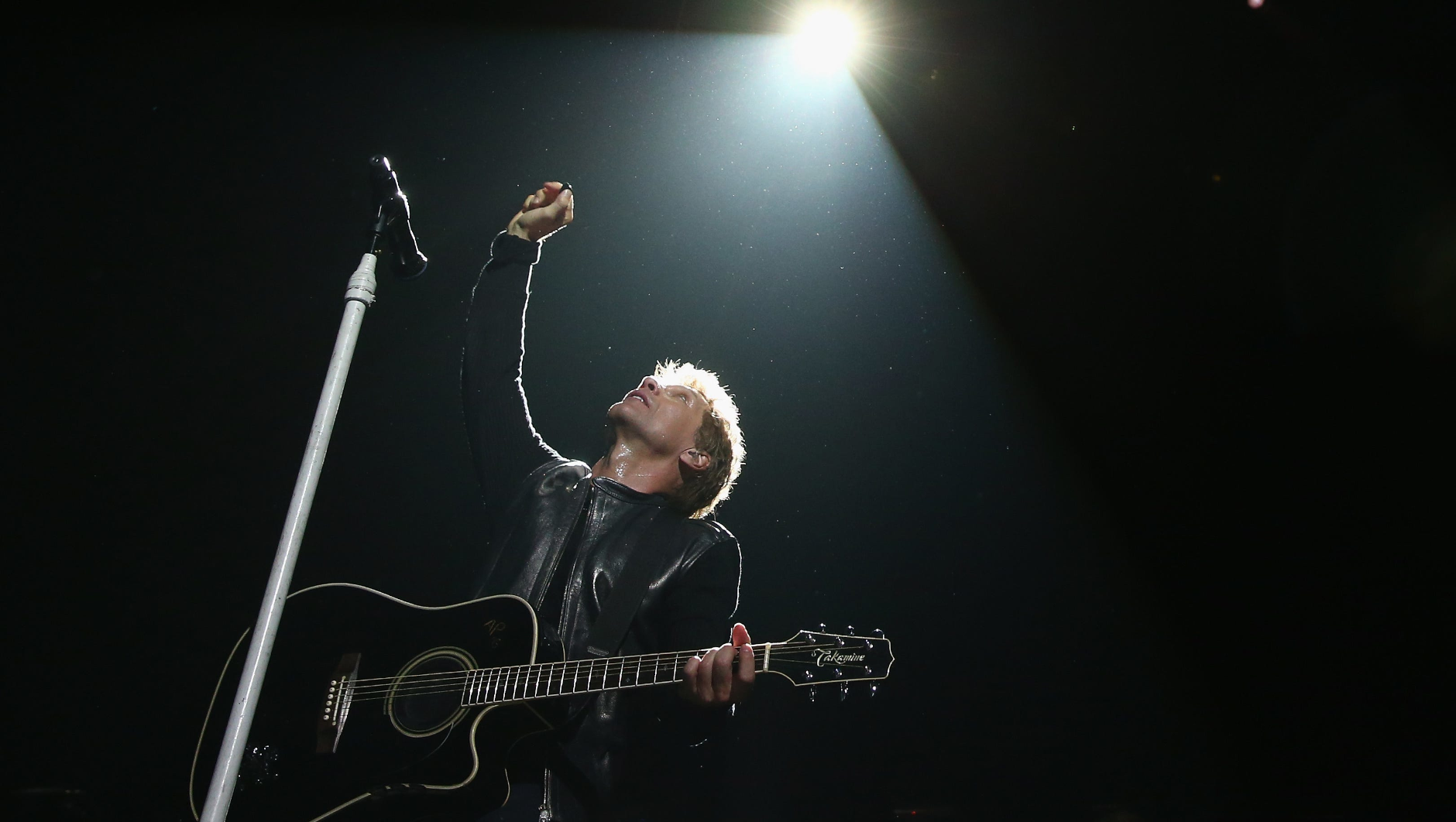 The Bon Jovi front man has relied on his trusted Takamine EF341SC (serial number 94100642) night after night, for nearly thirty years. Purchased from a New Jersey music store in 1994, the sleek black dreadnought has accompanied Jon on every tour since! 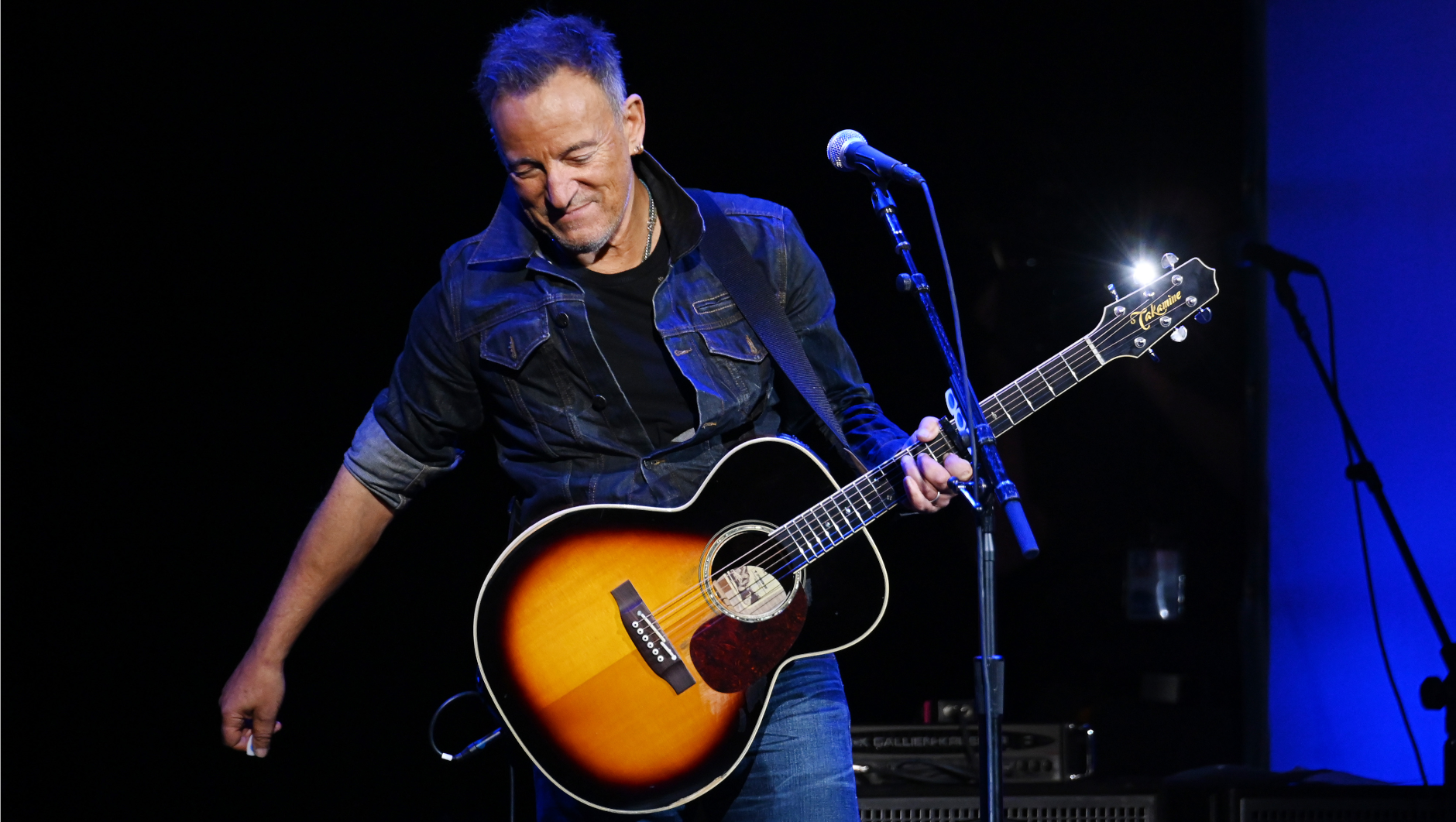 The legendary American singer-songwriter can regularly be seen wielding a Takamine P6N-BSB whilst on stage with the famous E-Street band. 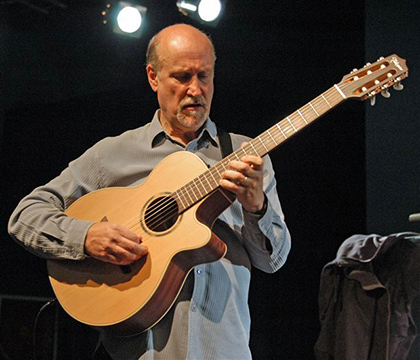 The Grammy winning Jazz/Rock guru has played a Takamine NP65C since 1998 and it remains his go-to nylon string guitar to this day. 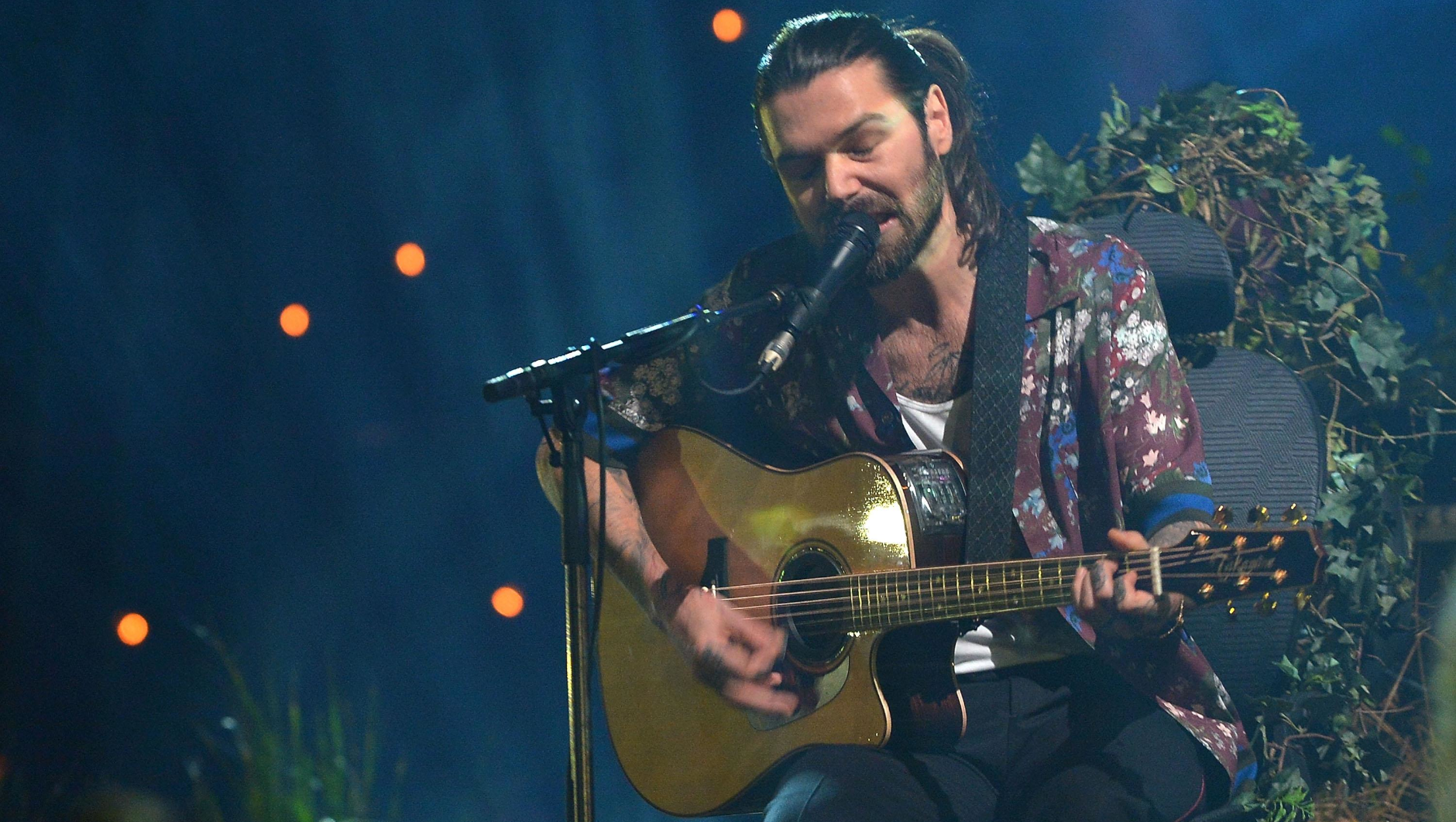 When filming an episode of the legendary MTV Unplugged series in 2018, the Biffy Clyro font man turned to his beloved Takamine P7DC. Bassist James Johnston can also be seen using a Takamine PB5-SBL for the performance.

In a market largely dominated by the American made powerhouses, Takamine has done far more than simply play their part. Their commitment to innovation and quality has elevated them to the top of the pedestal where they are regarded just as highly as their American contemporaries. Blazing the trail for the electro-acoustic platform, Takamine’s journey from humble beginnings to the word stage is one to be admired.

If you’re keen to stay up-to-date with other matters within the musical instrument industry, take a look at more of our ‘Industry’ content by clicking here.