We all know how nice an acoustic guitar sounds when it’s strummed – whether it’s round the campfire or on the sofa, it’s pretty darn soothing. But what about when you plug one in? In this article, we explore the main difference between the two most common acoustic pickup types: piezo and soundhole.

Most people would be able to hear the difference between piezo and soundhole pickups if they were played back to back. But we don’t all have that luxury – that’s why we thought we’d dig a little deeper and do the explaining!

The differences in a nutshell:

Piezo is short for piezoelectric, referring to the generation of a voltage by detecting variations in pressure (in this case, vibration). Unlike ‘traditional’ pickups or microphones, piezo systems uniquely detect vibrations from the wood of your guitar to generate sound, usually from the saddle. The material that detects these changes in pressure consists of tiny piezoelectric crystals – cool huh?

Make ANY Acoustic Guitar Pickup Sound GREAT With One Pedal! - Audio Sprockets ToneDexter Tired of getting an unrealistic acoustic sound when plugging-in your guitar? Spent money on the most stunning tonewoods to then have a cheap Piezo pickup installed? The ToneDexter can give you that in-room acoustic tone with the simple push of a button! ➡️ https://tinyurl.com/y7wjrxbw » Martin Performing Artist GPCPA4 Grand Performer | https://tinyurl.com/yczaxchr » Shure SM81 Condenser Mic | https://tinyurl.com/y7owzs2h Check out our Incredible Fishman Epic Deal! » Fishman SA330X PA System Bundle | https://tinyurl.com/yc4ocumo ↪️ Episode Guide ↩️ » 0:00 Introduction to the Audio Sprockets ToneDexter » 1:00 What Is The ToneDexter? » 2:15 Let's Compare a regular Acoustic Pickup With The ToneDexter » 3:05 How Does The ToneDexter Work? » 7:18 Let's Look At The Acoustic Preamp » 11:07 Comparing The Tone Dexter To The DI » 13:00 What Else Does It Come With? » 16:22 Let's Get Some More Tones Welcome back to Acoustic Paradiso! Today Ben checks out the incredible Audio Sprokects ToneDexter Preamp Pedal & puts it to the test to find out if it can truly sound like a mic'd up acoustic! This all-encompassing preamp pedal packs an incredible amount of customization potential. With character controls & 11-position wave maps available, sampling your favourite microphones has never been easier. The ToneDexter takes the sound from your microphone & plugged-in acoustic to create a natural blend of the in-room feel from your acoustic guitar. Easy switching allows you to jump between the DI & Preamp along with a blend switch for full customization & storage. Check out our "Ultimate Guide To Acoustic Guitar Pickups" ➡️ https://www.andertons.co.uk/acoustic-guitar-pickup-guide 👕 Buy A T-Shirt 👕 | https://tinyurl.com/vdq7rmg You've watched the videos & seen the store, now join the Andertons Family with our exclusive, official merchandise! With free UK delivery on all orders containing only a T-Shirt, Hoodie or Jumper & super low international shipping costs, there is no better time to be an Andertons fan than now! Interested in other Andertons YouTube channels? Click on one of these links to find out more… Andertons Guitar & Bass YouTube Channel: https://goo.gl/kRJCpb Andertons Drummers YouTube Channel: https://goo.gl/9yKSS9 Andertons Synths, Keys & Tech YouTube Channel: https://goo.gl/ns172M Andertons Shopping Website: https://goo.gl/TPsG2Q Make sure to subscribe to Andertons TV for more great videos like this: https://goo.gl/aAzyQM #Andertons #AcousticParadiso #ToneDexter https://i.ytimg.com/vi/ynizGfOKSIE/default.jpg PT18M22S 2020-06-22T14:00:14Z
39013

Piezo pickups detect their vibrations from the saddle of the guitar, where the strings are particularly tight. As a result, the sound is often extremely bright and clear, with plenty of attack – every note is defined. They have a broad dynamic range, so the nuances of your playing shine through pretty accurately. If you play softly, your guitar’s signal will be quiet; strike hard, and the guitar will bellow accordingly.

Because they exclusively detect vibration and get no sound from the inside of the guitar, they’re almost totally resistant to feedback. This makes them brilliant for loud, live performance situations – no ear-splitting feedback or hum to worry about! 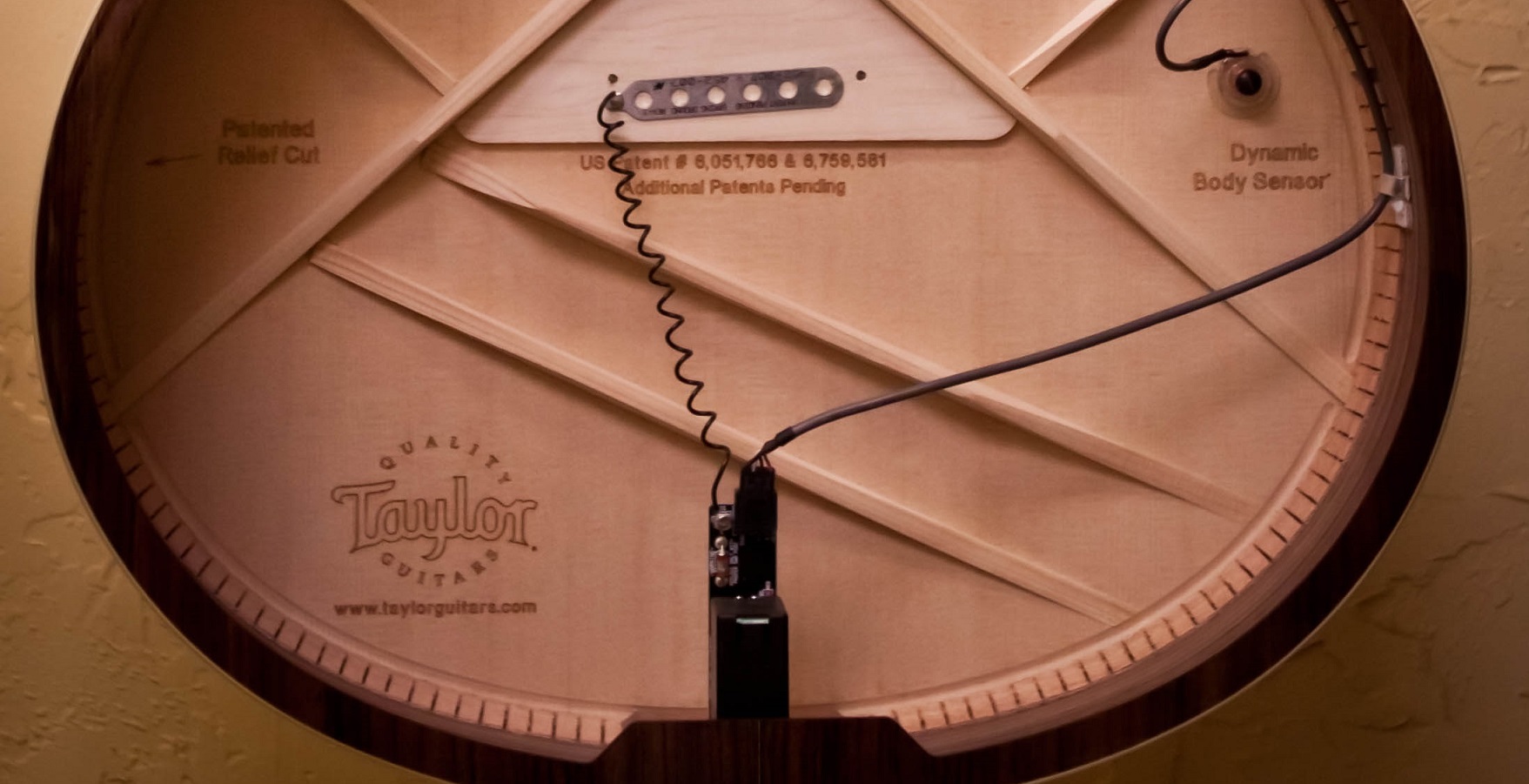 Piezo systems produce a fairly low output, meaning they often need to be boosted via a preamp. In some cases, the sensitivity of their dynamic range requires that the signal be compressed and boosted at the same time, which can quite drastically colour the tone of your instrument.  In addition to this, the phenomenon of ‘piezo quack’ is well-known among the guitar community; it refers to the sensor or preamp getting overloaded and producing an unattractive nasal quality.

Piezos are also notoriously fiddly when it comes to fitting. They’re most often found pre-fitted to instruments, but if you fancy fitting one yourself, you’d best prepare for a challenge!

As mentioned earlier, soundhole pickups detect vibrations in your guitar’s strings using magnetic fields. These magnetic systems can sometimes produce a clear sound that’s similar to an electric guitar – because they’re essentially the same as electric guitar pickups. The output is often similar too, so there’s little boosting required to bring them up to a decent level – but that’s down to preference to some degree!

Magnetic systems are usually super-easy to install; you’ll recognise them as the pickups that simply bridge the gap of your guitar’s soundhole. They often simply require slotting in, sometimes with a few turns of a screwdriver. 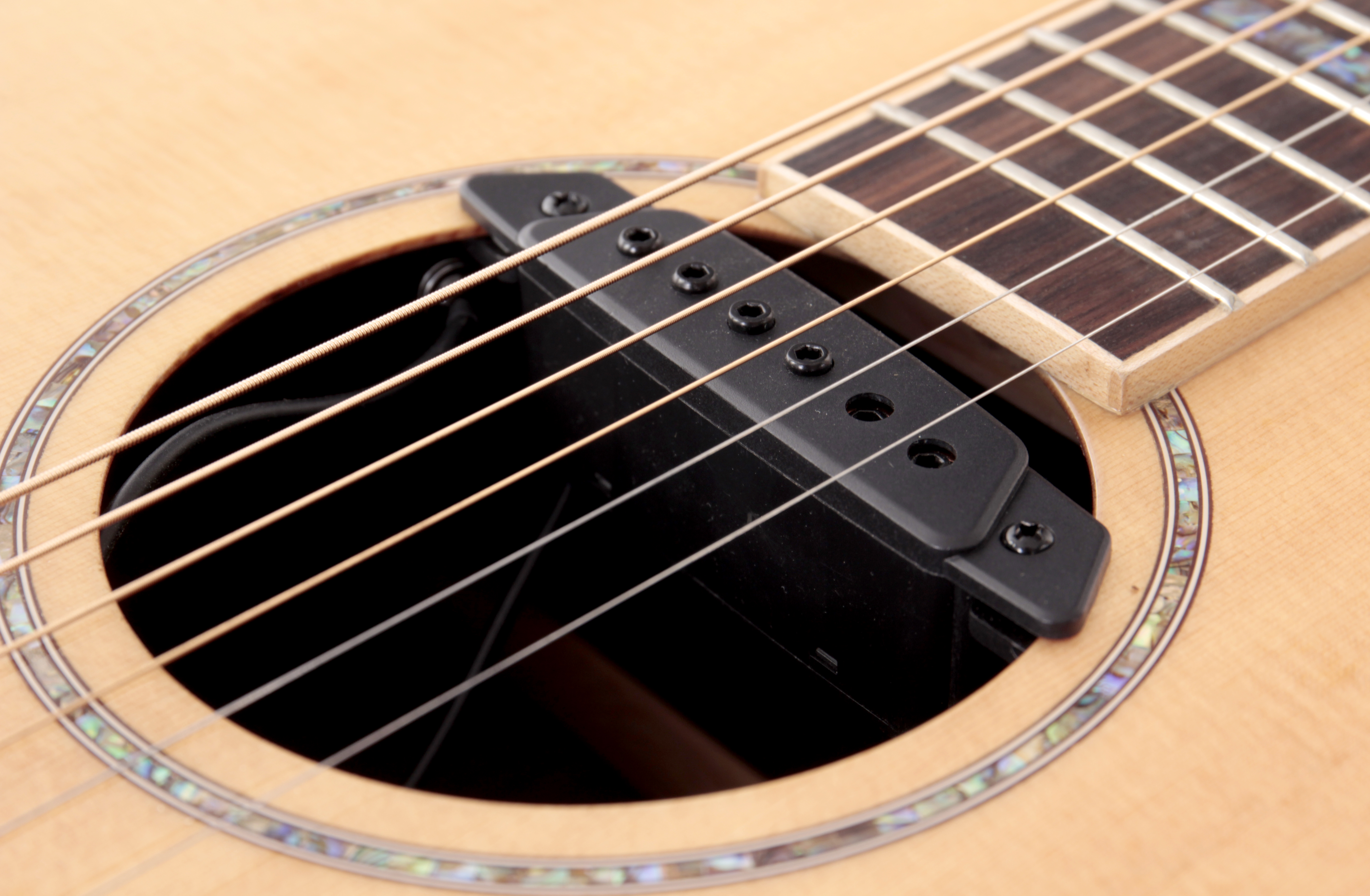 Because they rely on vibrations of the strings, soundhole pickups can be a little more susceptible to feedback. Some people also aren’t always keen on the almost-electric quality of these systems, especially given the fact that they’re fitted to acoustic guitars. Again, it’s totally subjective!

Summary: the difference between Piezo and Soundhole pickups

There you have it! Many companies offer combinations of pickup choices; many Sire acoustic models feature both piezo and magnetic pickups for a versatile blended tone. Brands like LR Baggs also produce hybrid pickups which combine piezo, magnetic and/or microphone for a great natural sound. You’ll often find LR Baggs electronics included in popular acoustic models from Alvarez, Gibson, and many more.

Want to know more about acoustic pickup choices? It doesn’t end at piezo and soundhole. Check out our guide to acoustic pickups! And while you’re here, check out the rest of our labs & learn content – enjoy!