There’s an age-old debate (probably since the '50s) that says that the type of neck your guitar has will greatly influence its tone and certainly, sustain.

We explore how these differences might be felt and heard, and whether or not it really even matters…

Generally speaking, bolt-on necks are thought of as cheaper and easier to manufacture and repair. On the other hand, set neck guitars are thought to have oodles more sustain and take much longer to build because of the waiting time for the glue to set in the dovetail between neck and body.

Then you’ve got neck-through guitars (often spelt ‘neck-thru’), which are practically ALL neck. As in, the neck continues all the way through the body as a single piece of wood, with two wings attached underneath and on top to form the rest of the guitar. A Gibson Firebird is a famous example, with the pickups mounted on the piece of wood that runs through the body. Neck-through has also been hailed as one of the best when it comes to sustain.

Each camp has its devotees, and some people don’t care too much for the argument. Many are rather happy to play all types of guitars and enjoy them for what they are. I’m going to try and highlight the pros and cons of each so that you can choose which you prefer – or to help you come to the decision that you can have one of each! 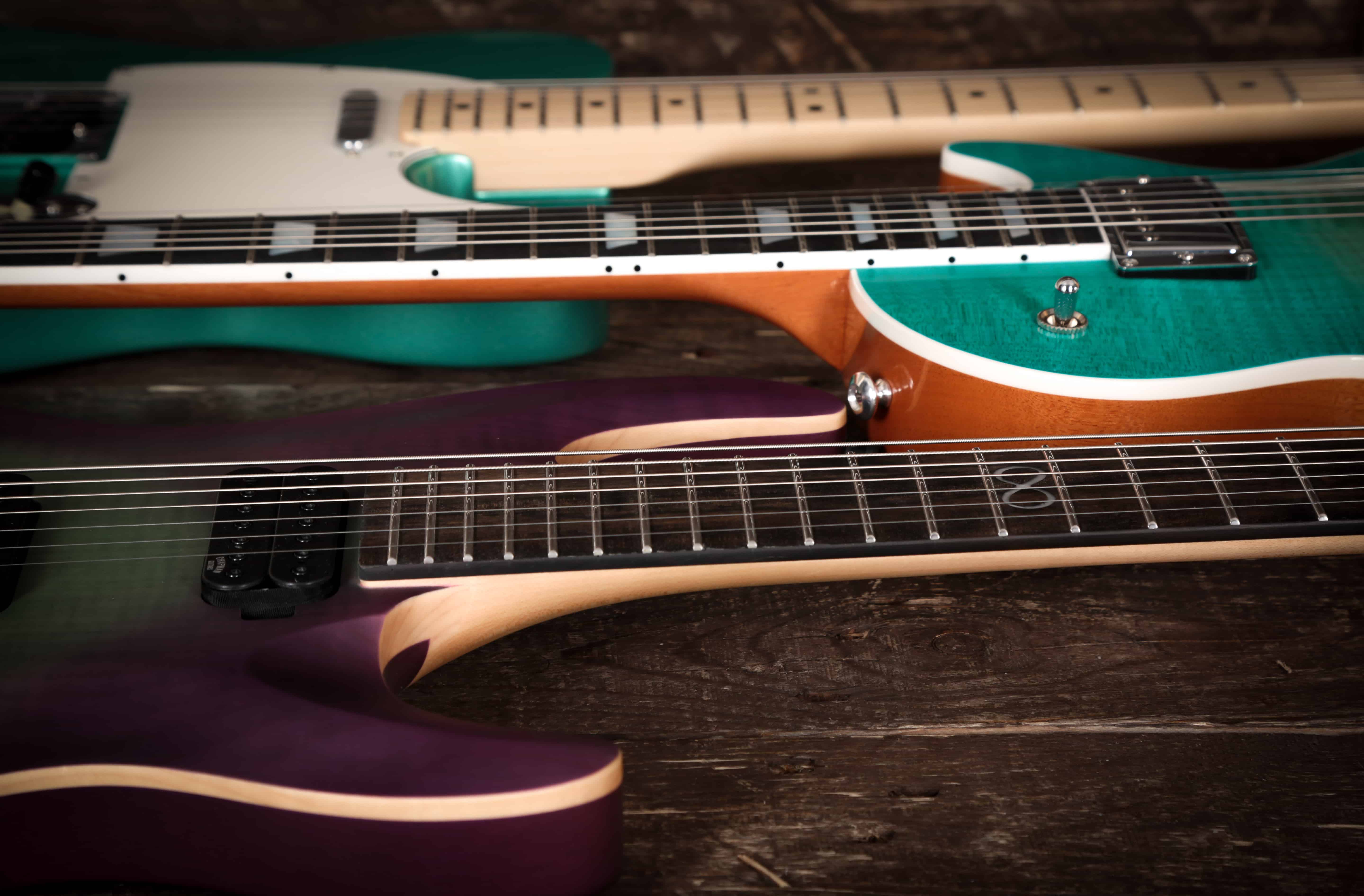 What is a Bolt-On Neck Guitar?

Bolt-on neck guitars are known for giving you a snappier, twangy tone than the other types. This all has to do with the transferal of resonance between neck and body. That slight gap between neck and body forms the tiniest barrier and slows the sustain compared to a set neck.

Bolt-on necks are favoured by many Fender guitars and other S-type and T-type guitars like the G&L range. Many brands use bolt-on necks for their tonal qualities and as mentioned before, the ease of manufacturing such guitars. It’s much simpler to build bodies and necks separately and then use a bolt-on construction to put them together.

The major advantage of a bolt-on neck is that it’s easy to manufacture and keeps costs down on construction. It’s also easy to repair/replace or even reset if needed (when the guitar is getting setup).

The other pro is the twangy, snappy tone, with some people simply preferring this feel and response. Bolt-on necks are often made of Maple, and as a dense wood, this often means less warp and twist than you might get from other woods.

The ‘cheapness’ factor can be seen as a con. Purists might like the idea of their set-neck guitar transferring tone from neck to body in a seamless way. The aforementioned (slight) loss of tone due to the gap between neck and body. 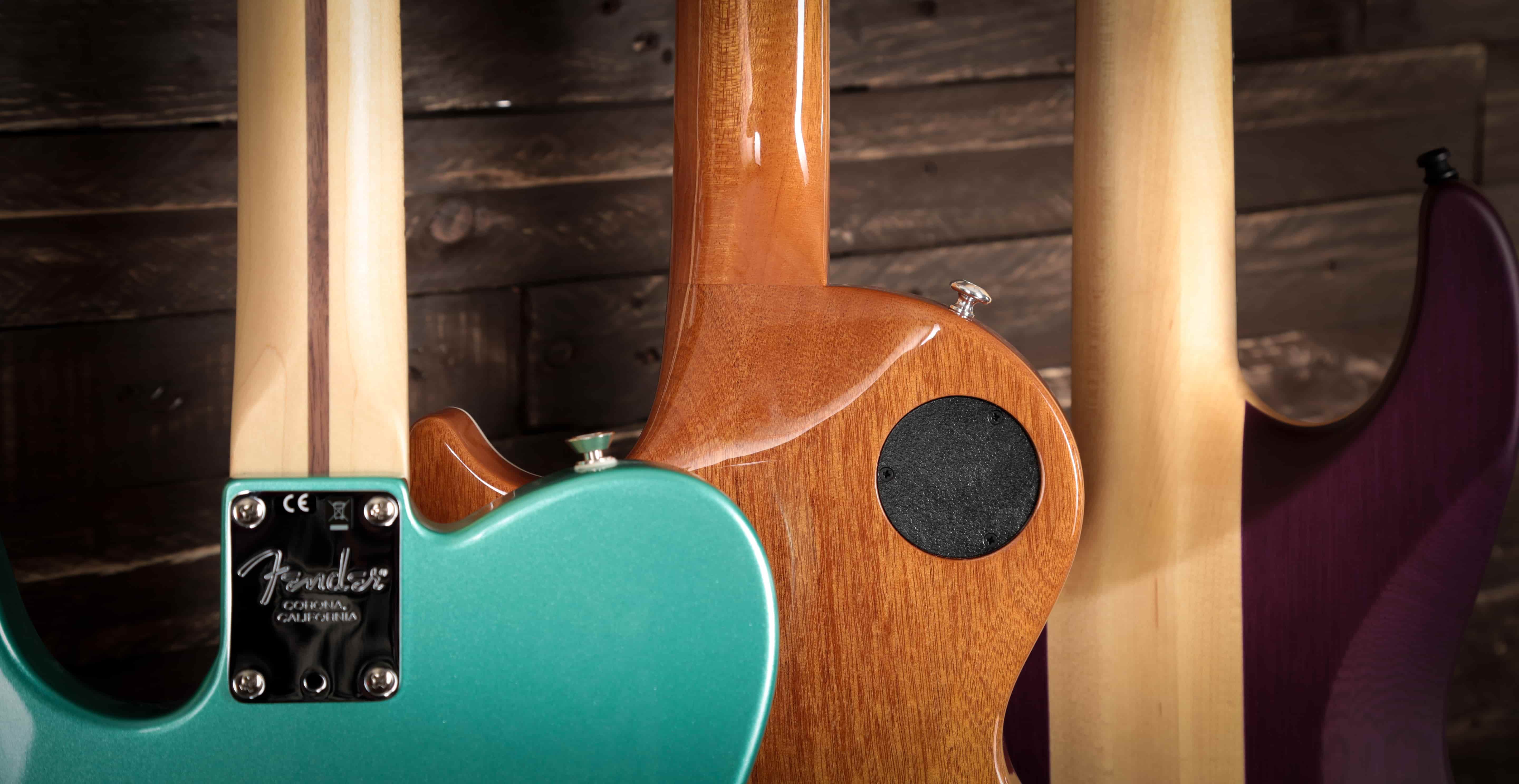 What is a Set Neck Guitar?

Set necks are glued in via a dovetail joint in the electric guitar body. So, you’ll have a slab of Mahogany and the luthier will cut a dovetail into the body and connect the neck like a puzzle piece with incredibly strong wood glue. This glue then sets and an unbreakable bond is formed, especially when using traditional hide glue.

This is sometimes used on Gibson Custom Shop models, which hearken back to the ’50s and ’60s. This breaks down, and rather than creating a wall between the two pieces as synthetic glue does, it melds into the wood itself to form a bond that offers stunning resonance.

Both Gibson and PRS guitars are famous for their set-neck guitars and are ambassadors for the neck type. Think Gibson Les Paul or PRS Custom 24 for the best example of a set-neck guitar.

The tonal transfer between neck and body is better in a set-neck than a bolt-on, resulting in a warmer and fuller sound. This isn’t always a good thing, as some people prefer the snap of a bolt-on. The set neck will couple all of the energy from your guitar strings and blur it in a way that fattens the body of a note. This is great for a resonant and long-sustaining guitar sound.

Difficult to repair and near-impossible to reset. You can’t change the neck on a set-neck guitar if you prefer the shape of another.

What is a Neck-Thru Electric Guitar?

Neck-through, or neck-thru, is when the same piece of wood that makes up the neck of a guitar also makes up the middle section of the body itself. This section is then used to mount the bridge, saddles and pickups for the best possible sustain on a guitar. The rest of the guitar’s shape is then made up of ‘wings’, that become the bottom third and top third of the guitar. This is done using a laminate construction process.

This middle neck-through laminate gives guitar makers the opportunity to bind different wood types together. This has been used to great effect to offer stunning neck stability, by companies like Ibanez and Schecter. You can get 3-piece, 5-piece, 7-piece and more!

Because neck-thru guitars are often made up of different types of wood (whether 3-piece or more), the neck will be less susceptible to conditions that might cause warp and twist. It’s almost like the woods counteract each other for more stability.

Neck-thru is regarded as the neck type that offers the best overall sustain and resonance. The strings will vibrate the entire piece of wood that is housing the pickups, and transfer sound to your amp. They are often favoured by shredders for their strength in maintaining a low action without the wood moving much.

There is an argument to say that single wood pieces resonate better because no matter how tightly wood is glued together, there are still gaps that will slow the energy transferral. And although these might be minuscule, when multiplied by 7, you’re potentially losing a lot of energy/tone. A single piece of wood, Mahogany for example, will have consistent density because it’s from the same tree rather than from 7 potentially different trees.

Having a neck-through also means you have breaks in the wood between the wings, which could also cause tone loss. Purists often prefer single-piece mahogany back and two-piece Maple top (or even one piece if you want something really fancy).

It’s exactly what you might have been thinking whilst reading this entire article – it’s all down to choice and preference. It’s also worth having different guitars in your arsenal to get those different sounds. If you’re only going to have one, you need to weigh up what’s more important to you and your needs.

My favourite guitar is a Custom 24 with a set Mahogany neck, but I also have a small collection of Telecasters because they just twang better than anything else out there! It’s all personal preference after all. If only trees grew fully formed, ready to play electric guitars…

If you enjoyed the article then click here to read more of our Labs articles!