Contrary to popular belief, coil split and coil tap are not just two ways of saying the same thing. There’s quite a big difference in the way they function and the resulting sound. The main effect you get from both is a change is tone and pickup output, but the two sets of electronics go about accomplishing the task in different ways.

A lot of players like to have the option of reducing the output from their guitar pickups. It broadens the available palette of sounds, which is crucial in modern music’s extensive tonal crossovers. This feature is most often found in guitars equipped with hot humbuckers or high-output single coils, as it adds another dimension to the styles you can play with just one guitar.

Nowadays, it’s not as simple as owning a single coil-equipped guitar for “softer” music genres and a humbucker guitar for “heavier” music. The technology is there to expand on guitar tones, so players should naturally expect more diversity across all guitar prices. 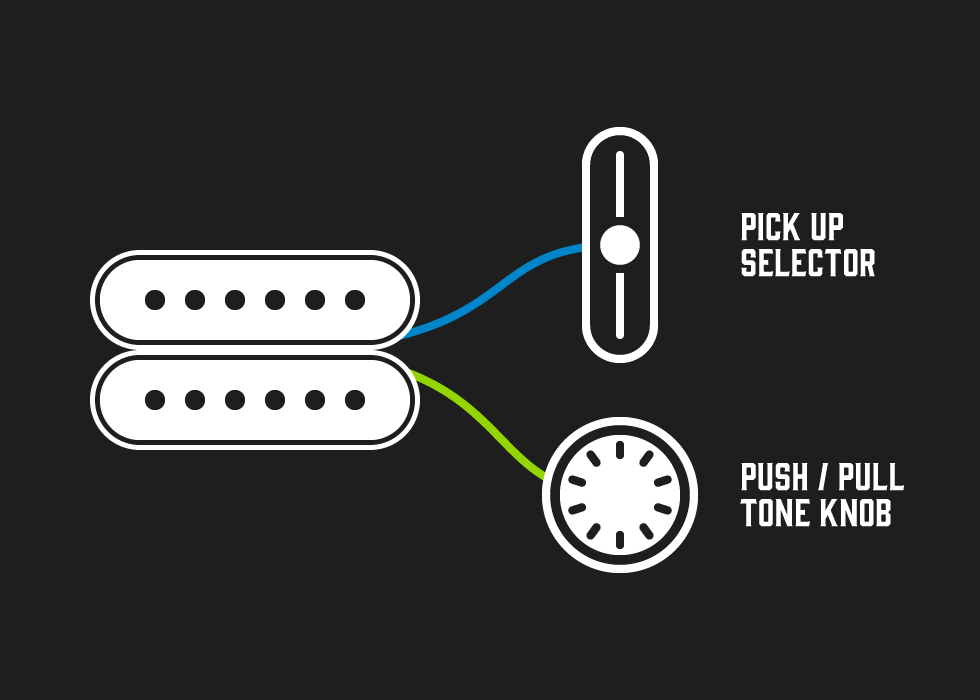 What is Coil Split?

Coil splitting only applies to humbucker pickups. Humbuckers consist of two coils and magnets of opposite polarity in order to cancel hum and produce a guitar signal. To split a humbucker is to cut out one coil from the circuit, leaving a single coil to work its magic – just like you’d hear from your standard Strat or Tele.

Why would you want to split the coils of your pickup? Humbuckers produce a very different tone to single coils. They sound thicker, smoother and warmer, with single coils pretty much sounding the polar opposite. It’s good to have the choice of both pickups styles. Single coils are arguably richer in character and dynamism, sitting in a more prominent position on the frequency spectrum. They’re ideal for more nuanced playing or soulful leads – and who wouldn’t want that given the chance?

What is Coil Tap?

Similar to how coil splitting essentially halves a humbucker, coil tapping cancels out the full length of the pickup magnet by taking the signal from a shorter point in the wire (usually around the midpoint). It can be utilised in both humbucker and single coil pickups.

The more windings a pickup has, the more output it produces. And by reducing the amount of wire the signal runs through, you get a lower output that’s more attributed to “vintage” music genres such as classic rock and blues. This is great for recreating an old school tone with a full range frequency and less onus on the midrange.

It’s worth noting that a coil tapped humbucker won’t necessarily sound identical to a single coil pickup unlike coil splitting. There’s a good chance it’ll have more akin to the effect of removing a boost pedal than anything else, reducing a bit of the heat and high-end. Coil tap is generally more of a niche feature and not quite as versatile as coil split. It’s also less frequently used by major companies, but you’ll find it on the occasional Les Paul.

Gibson tend to use coil tap the most out of the big guitar manufacturers. This is so they can equip their guitars with modern pickups, while also offering the option of classic PAF sounds if you’re into that too.

Coil splitting circuits are usually found on guitars with two humbuckers. It provides you with alternate tones you’d find useful in mixing up your sound, as well as a quick way to change things up in a live situation. Check out Charvel and Schecter to get a good idea.

In reality, there isn’t one circuit better than the other. Find out for yourself if you prefer coil tap’s vintage tone or coil split’s single coil and humbucker versatility.

If you enjoyed this read, check out our other Labs articles!