The acoustic/electric hybrid guitar isn't exactly a new innovation. However, Fender has raised eyebrows with its new Acoustasonic Tele guitar, the focal point of its 2019 NAMM Show releases. In this article, we compare the quirky-looking Acoustasonic with the instrument that set the precendent for hybrids - the Taylor T5Z.

Just when many were starting to wonder whether Fender had lost its sense of imagination, they surprised us all by unveiling the Acoustasonic Tele. Although it is just one of many of Fender’s releases from the 2019 NAMM Show, there’s no doubt that the Acoustasonic is the most significant – and daring.

Its looks are certainly divisive, but underneath the Acoustasonic’s unique exterior, you’ll realise that this instrument is packed full of innovation and technology. Aiming to offer both acoustic and electric players a guitar that can seamlessly cover the sonics of both instruments, the Acoustasonic could become an instant hit with modern singer-songwriters.

However, The Fender Acoustasonic Tele isn’t actually the first guitar designed for this purpose. That’s because the product it’s attempting to dethrone is the Taylor T5Z; a guitar that has been available for half a decade. Still in production, the T5Z has been a reasonable success for Taylor.

But it’s fair to say that the hybrid guitar market in which it occupies hasn’t been fully exploited yet. And that’s why Fender has developed the Acoustasonic Tele; to take control of this market and draw players towards it. For the remainder of this article, we’re going to breakdown the features of each instrument and compare them.

Like we alluded to in the introduction, you’d be forgiven for thinking that Fender has played it safe for a few years. Of course, they are aware that their guitars will always be popular, with iconic models like the Stratocaster and Telecaster setting the precedent for electric guitar designs back in the ’50s. But to remain relevant, all companies must keep one eye on future trends.

It’s clear that Fender has observed the current state of the market, and identified something that most modern musicians seek – a versatile instrument. The Fender Acoustasonic Tele certainly breaks the mould and meets this criteria. Although it’s clearly based on the classic Tele shape, almost every other aspect of this distinctive guitar goes against Fender’s grain. Let’s take a closer look…

The most striking aesthetic feature of the Fender Acoustasonic Tele is its soundhole. Whereas the Taylor T5Z is a bit more in-keeping with the looks of a semi-hollow electric guitar, the Acoustasonic almost fully embraces the appearance of a traditional acoustic. Featuring a full hollow body based on Fender’s innovative ‘Stringed Instrument Resonance System’ (SIRS), this allows the Acoustasonic to achieve the response and harmonic breadth of a typical acoustic guitar.

It doesn’t simply end there though, as Fender has also crafted the Acoustasonic Tele entirely from Mahogany. This is unusual, as Fender’s common tonewood of choice for guitar bodies is Alder, a balanced-sounding material with a bright mid-range. However, Mahogany is more synonymous with acoustic guitar construction, delivering a rich sound with a warm low-end. What this further proves is that Fender has designed its Acoustasonic Tele to be more ‘acoustic-like’ than electric.

The Fender Acoustasonic Tele’s neck is also made of Mahogany, to add further tonal depth. Although its headstock retains the classic Tele vibe, the Acoustasonic’s neck is shaped to Fender’s Modern “Deep C” profile, to strike the perfect balance between electric and acoustic neck carves. However, it’s Ebony fingerboard is fitted with narrow tall frets, which are more akin to the frets you’d find on acoustics. To ensure that electric guitarists don’t feel alienated though, Fender has given the Acoustasonic Tele 22 frets. They’ve even sculpted the heel to provide excellent access to the higher register!

Alongside its unique construction, the Fender Acoustasonic Tele’s electronics are also rather special. Powered by a revolutionary Fender and Fishman-designed acoustic engine, you can easily transition from a convincing acoustic sound to a traditional electric rhythm tone on-the-fly – and everything between.

A proprietary blend of classic analogue and future technologies, the acoustic engine optimises the guitar’s natural sound and modifies its resonance to deliver a curated collection of voices. These acoustic and electric voices can be used independently, but you can also blend them via the ‘Mod Knob’ to create experimental sounds. Fender’s Acoustasonic Noiseless magnetic pickup lets you use them simultaneously too – very cool!

With the Acoustasonic Tele, Fender has also addressed the issues that commonly afflict electro-acoustic guitars onstage, where feedback can interrupt a set. Fender sought to eliminate that problem with the acoustic engine, but the smaller Tele body shape also assists in cutting out unwanted noise.

Although the Fender Acoustasonic Tele sounds appealing from its specifications, the Taylor T5Z is certainly easier on the eye. Introduced in 2014, the T5Z is an updated version of Taylor’s original T5, which was a similar-looking instrument but with a slightly bigger body.

Whereas the Fender Acoustasonic is a standalone model (albeit available in different colours), Taylor has made the T5Z a range of its own. Using different top woods for aesthetic and tonal variety, there’s more choice available for consumers. But despite these models varying in price, all Taylor T5Z guitars are more expensive than the Fender Acoustasonic, with most exceeding the £2,000 mark. However, some players may be willing to part with the extra cash based on the T5Z’s features.

With a body shape that more closely resembles an acoustic, Taylor designed the T5Z to be slightly more compact so that it feels like your playing an ES-style guitar. But like the Acoustasonic Tele, the Taylor T5Z boasts a full hollow body to allow for optimal acoustic-like resonance. Instead of a soundhole, Taylor decided to use its own elegant F-hole design instead, perhaps for aesthetic reasons.

Most T5Z’s are constructed from Sapele; both body and neck. Although it is a less conventional material, Sapele is tonally similar to Mahogany with a higher density, yielding brighter highs. This therefore means that the T5Z has a more vibrant natural sound, giving it slightly more cut in a band mix. However, the warmer tone of the Acoustasonic may be better for supporting a vocalist.

The Taylor T5Z features an Ebony fingerboard much like the Fender Acoustasonic, but instead of featuring narrow tall frets, the Taylor sports jumbo frets that are more suited for electric players. These allow for greater control over string bends and vibrato. The Taylor T5Z also features a 12″ fingerboard radius, which is flatter than the 9.5″ radius on the Acoustasonic Tele. This is another aspect of the T5Z’s design that is more in-line with that of most electric guitars – even shredders can appreciate it!

The Taylor T5Z conceals some interesting electronic elements. Although the angled bridge pickup may look like a single-coil, it is actually a humbucker that provides a thick and and powerful sound. This is paired with an additional humbucker in the neck position, which is discreetly installed beneath the top. The Taylor T5Z can therefore cope well with overdrive and even distortion, with Taylor’s design ensuring that feedback is kept to a minimum.

The T5Z achieves its acoustic voice via an internal magnetic acoustic body sensor. This accurately picks up the vibrations within the body, converting it into a signal that is fed from the output. The sound is akin to that of a piezo pickup, with a sparkly treble and a compressed quality. However, you can tame the presence with the T5Z’s onboard EQ, to achieve a smoother and deeper tone. 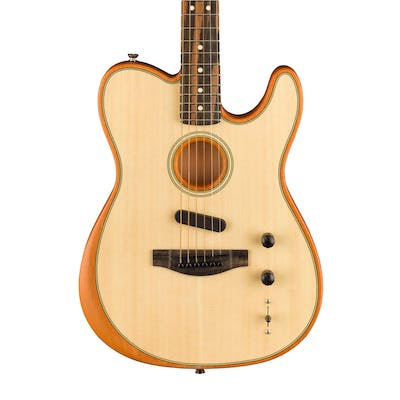 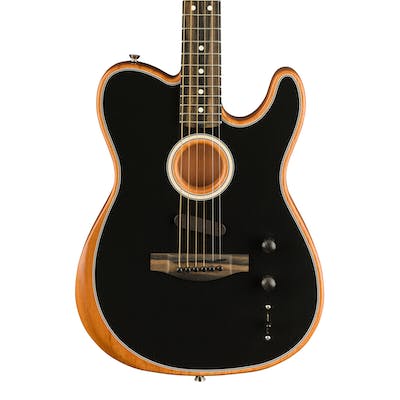 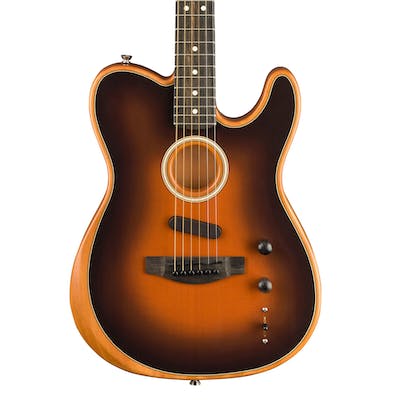 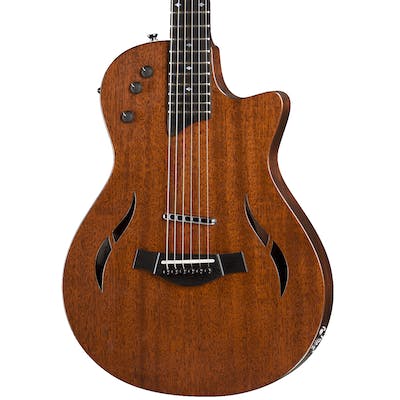