For the last 70 years, Fender has largely set the tone in the guitar industry. The American brand’s trendsetting instruments have helped to shape contemporary music as we know it, with today’s artists using their guitars and basses to pioneer the exciting sounds of tomorrow. And with Fender’s new American Professional II series breaking cover, we’re sure that players from all over the world are intrigued to discover how the US guitar giant has refined its flagship instrument line.

In this extensive blog, we’ve broken down the key features of Fender’s new American Professional II guitars. However, we’ve also compared these fresh-to-the-market models with Fender’s highest-spec production guitars from the American Ultra series – to help you to distinguish which instruments are best-suited for your playing needs! 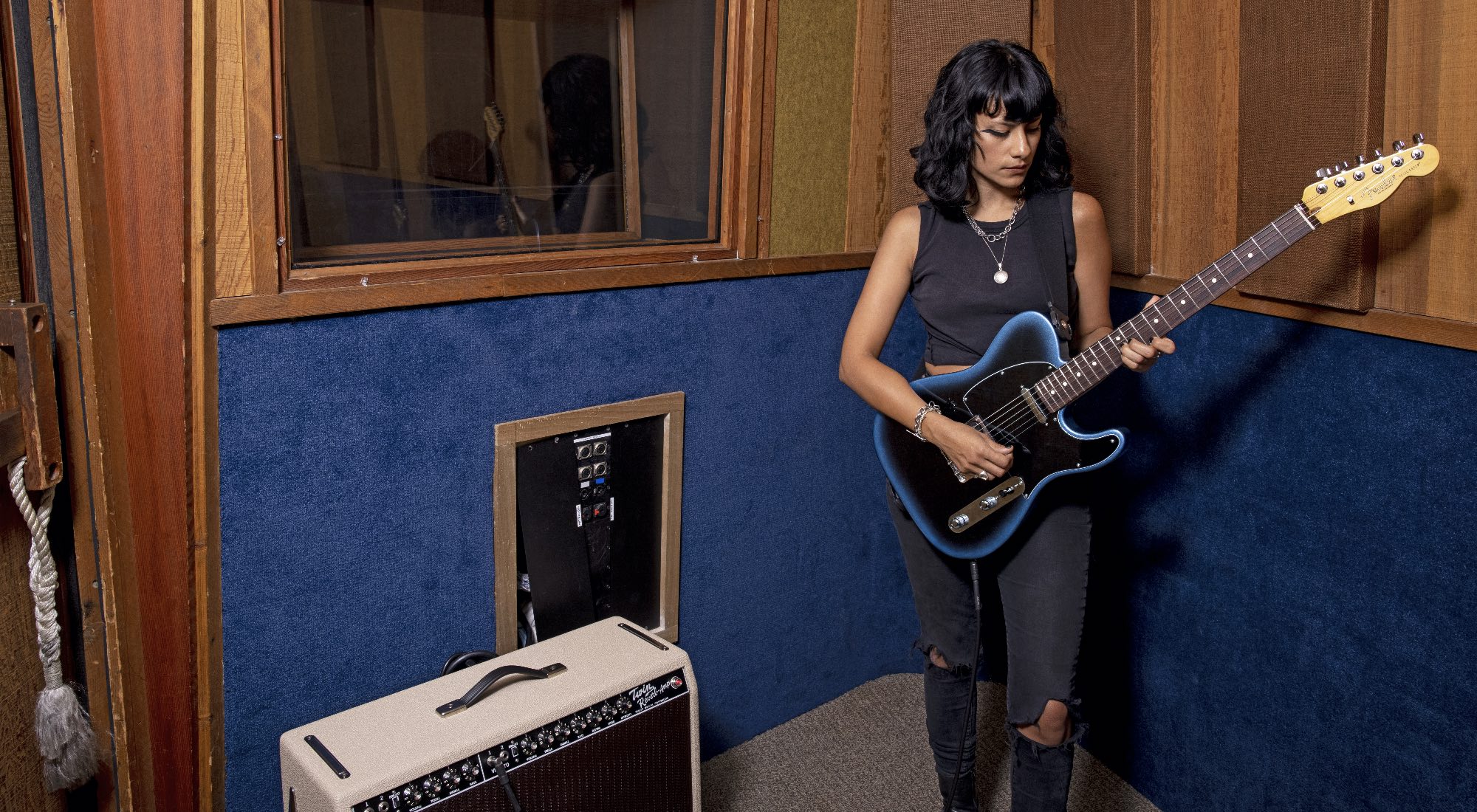 The American Professional II range has replaced Fender’s entire American Pro lineup, of which took over from the venerable American Standard series in 2017. It is essentially Fender’s new core USA range; encompassing 100 guitar and bass models that promise enhanced versatility and playability over their predecessors. Sporting minor yet noteworthy upgrades, these instruments perfectly merge classic Fender design with modern practicality.

What Features do Fender American Professional II Guitars Have?

For the most part, Fender’s American Professional II guitars maintain almost everything that made the original American Pro models so great. Only some minor updates have been executed. If it ain’t broke, don’t fix it – right? But ultimately, these small refinements bring these instruments more up-to-scratch for contemporary musicians looking for greater tonal flexibility and added playing comfort.

Fender has also introduced some tasteful new colour options that are exclusive to these guitars and basses. This includes a vibrant Miami Blue, as well as stealthy Dark Night and Mercury colours that are akin to Fender’s Strat Plus finishes from the ’80s and ’90s. 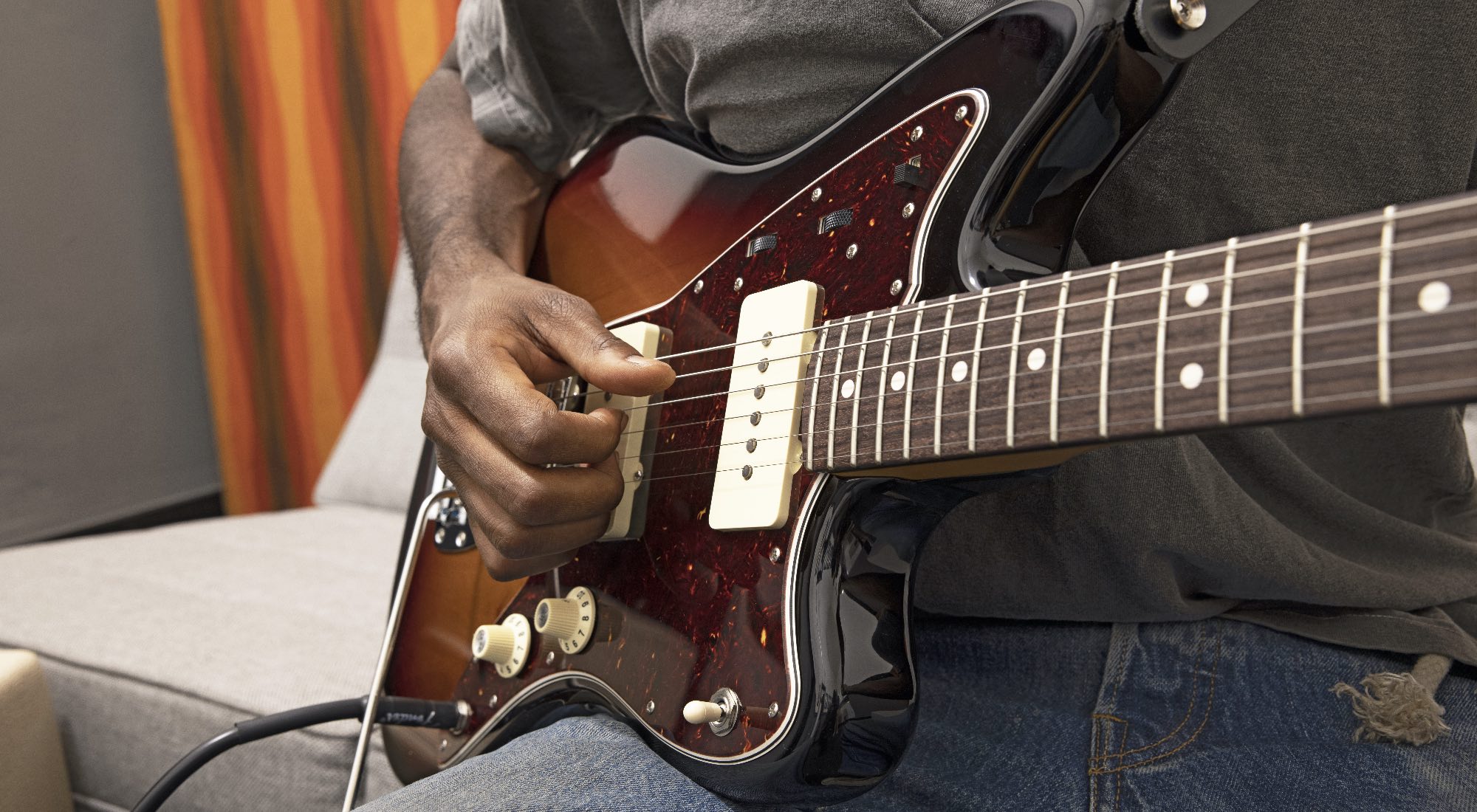 The majority of guitars and basses from the American Professional II series adhere to the timeless Fender tonewood combination. With balanced Alder bodies bolted to bright-sounding Maple necks, this classic construction design yields the snappy and articulate tones that Fender instruments are so renowned for.

However, selected Fender American Professional II guitars and basses (with natural finishes) boast Roasted Pine bodies instead. This material has essentially replaced the Ash body option previously available in the American Pro series, which has now become more difficult to source. The light weight, punchy tonal qualities and stunning grain pattern of Roasted Pine makes it a more than worthy alternative though! 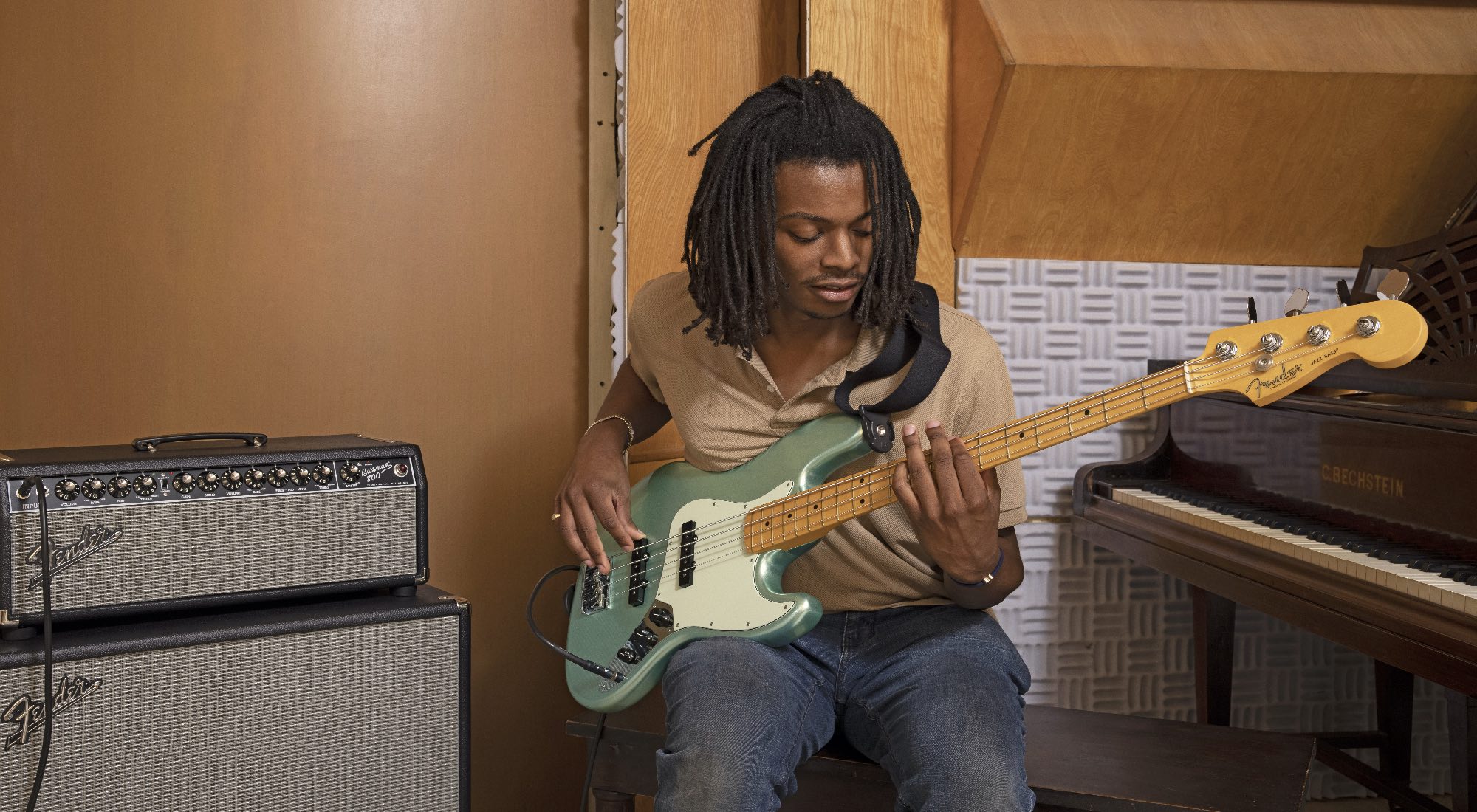 Fender has decided to retain its popular Deep “C” neck shape for its American Professional II electric guitars. The Jazz and Precision Bass models also keep their respective Slim “C” and ’63 neck carves. Comfortable for modern players and vintage aficionados alike, these acclaimed neck profiles have now been enhanced with a new “Super Natural” finish that provides a silky-smooth and friction-free feel.

Other ergonomic updates include rolled fingerboard edges across the whole Fender American Professional II line, as well as sculpted neck heels that allow for unrestricted upper-fret access. These tweaks may be difficult to spot at first glance, but they make a huge difference when it comes to overall playability. Pick one up, and you’ll notice! 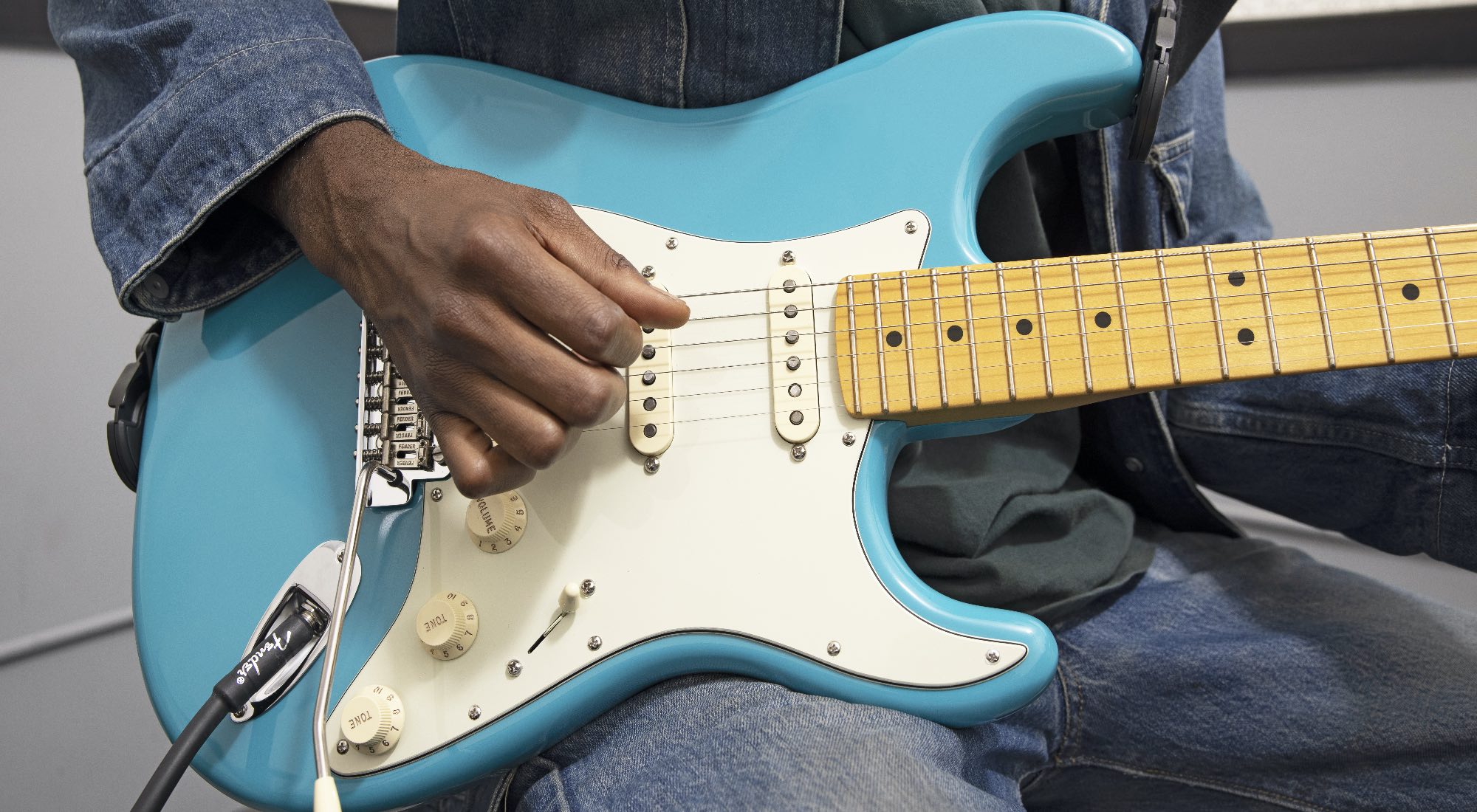 Guitars and basses from the original American Professional lineup came fitted with Fender’s ‘V-Mod’ pickups. Able to deliver iconic Fender tone but with a wider frequency range and a slightly more modern character; V-Mods found favour with players for their versatility over traditional vintage-voiced pickups. 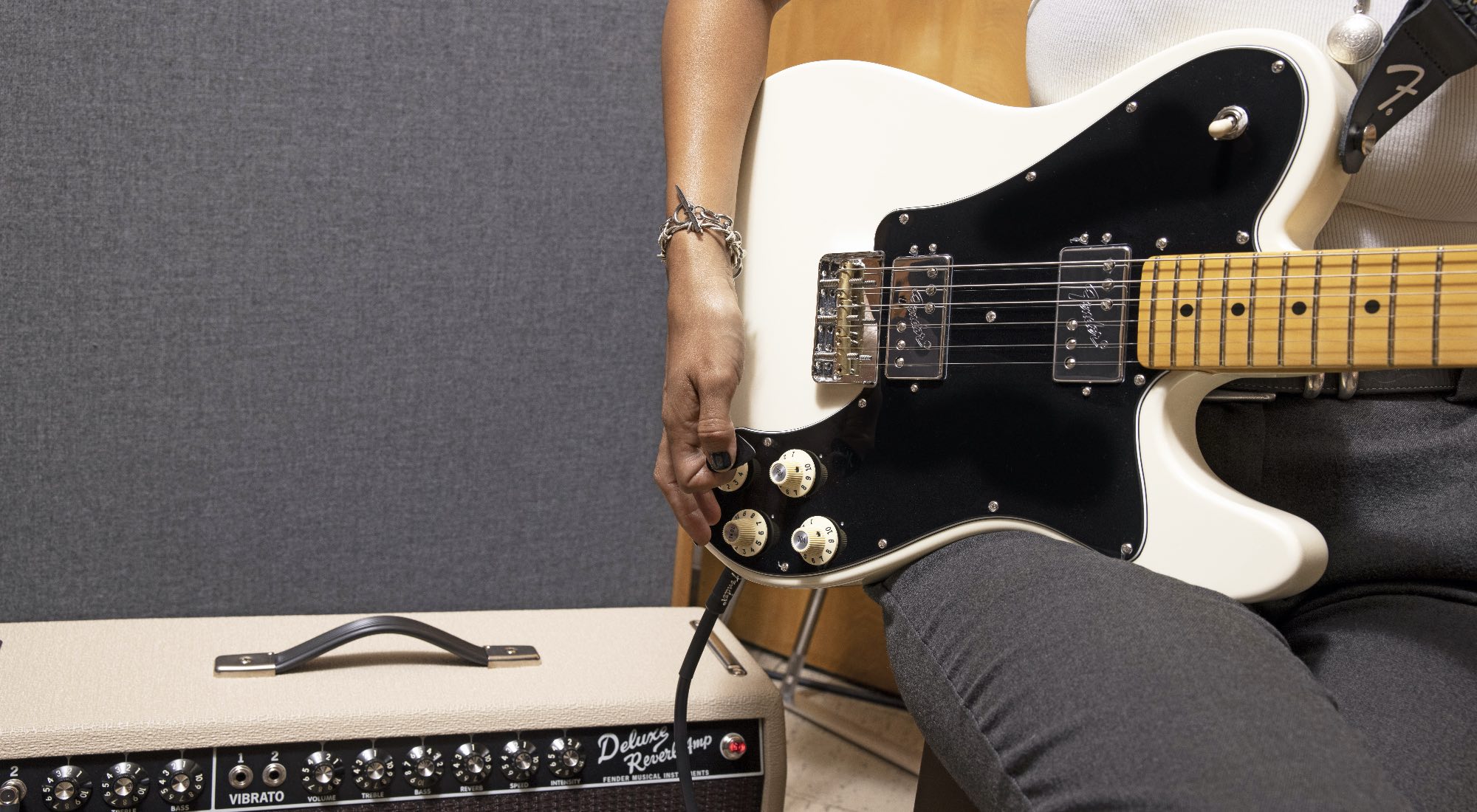 For example, the American Professional II Strat’s “Push/Push” knob allows you to add its neck single-coil to switch position 1 – which means that you can somewhat mimic a Telecaster’s pickup configuration. On the humbucker-equipped HSS Strat and Tele Deluxe models, this serves as a coil-split switch instead. The standard Telecaster’s “Push/Push” function enables parallel/series operation for unique sounds, while the Jazzmaster’s taps its bridge humbucker for a vintage-like output level. 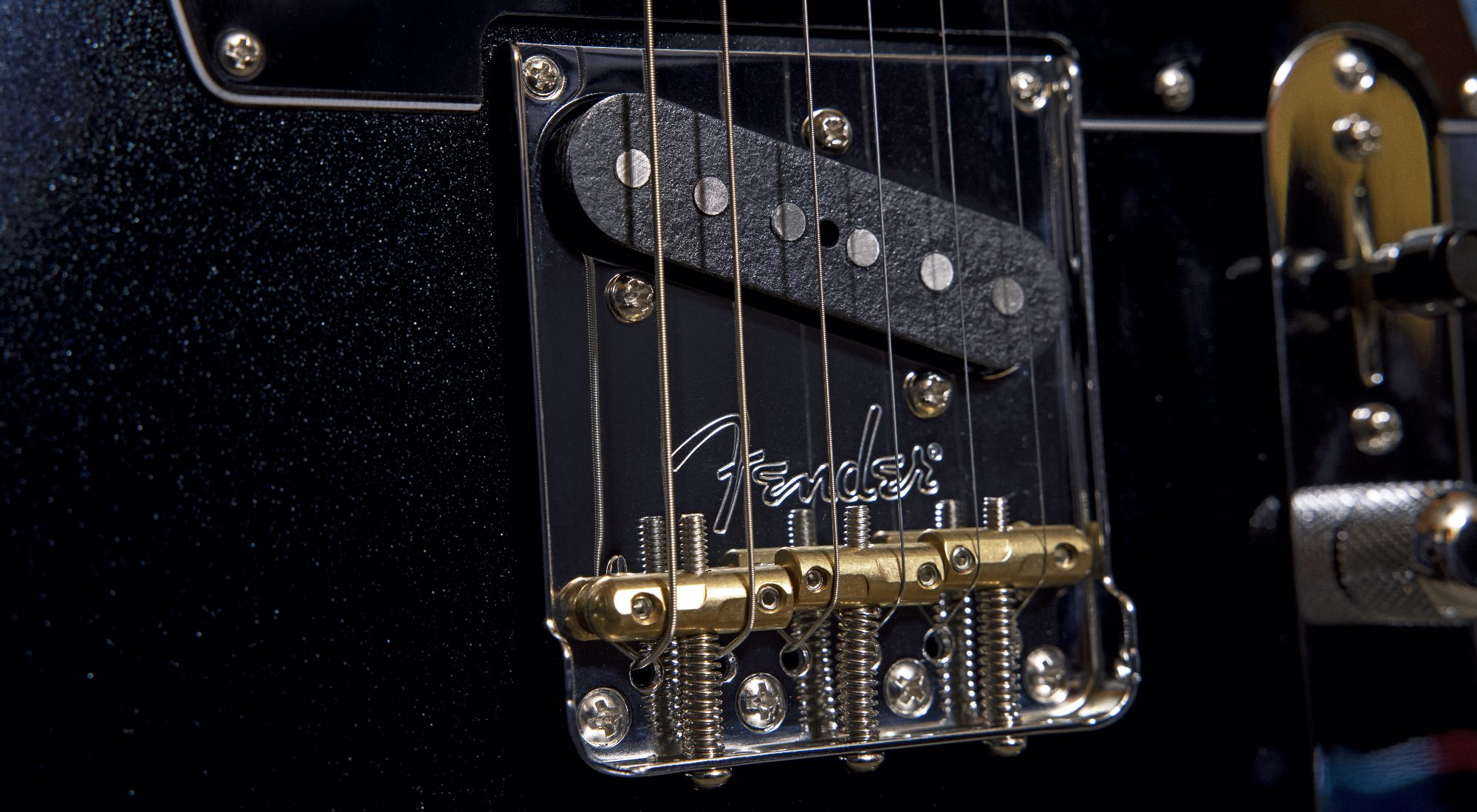 Alongside the new pickups, upgraded hardware appointments breathe new life into Fender’s American Professional II guitars. Although these updates aren’t anything to write home about, they exemplify how Fender tastefully improves upon its formulas over time without doing anything too drastic.

The much-adored 2-point synchronised tremolo remains on the Stratocasters, but these are now fitted with cold-rolled steel blocks that increase sustain, clarity and top-end sparkle. Their Telecaster cousins come installed with completely redesigned “Top Loader/String-Through” bridges, which allow you to thread their strings either through their bodies or from their bridge plates. And Fender’s new “Panorama” tremolo gives their American Professional II Jazzmasters a smoother vibrato arm action, of which can easily be popped in and out on-the-fly.

All guitar and bass models now sport bevelled neck plates too. This is a tiny tweak, but these simply offer an extra layer of finesse by blending beautifully into the shapes of their sculpted neck heels. The electric guitar models also feature newly-designed string trees that are engineered to prevent unwanted tuning slips. Pretty neat! 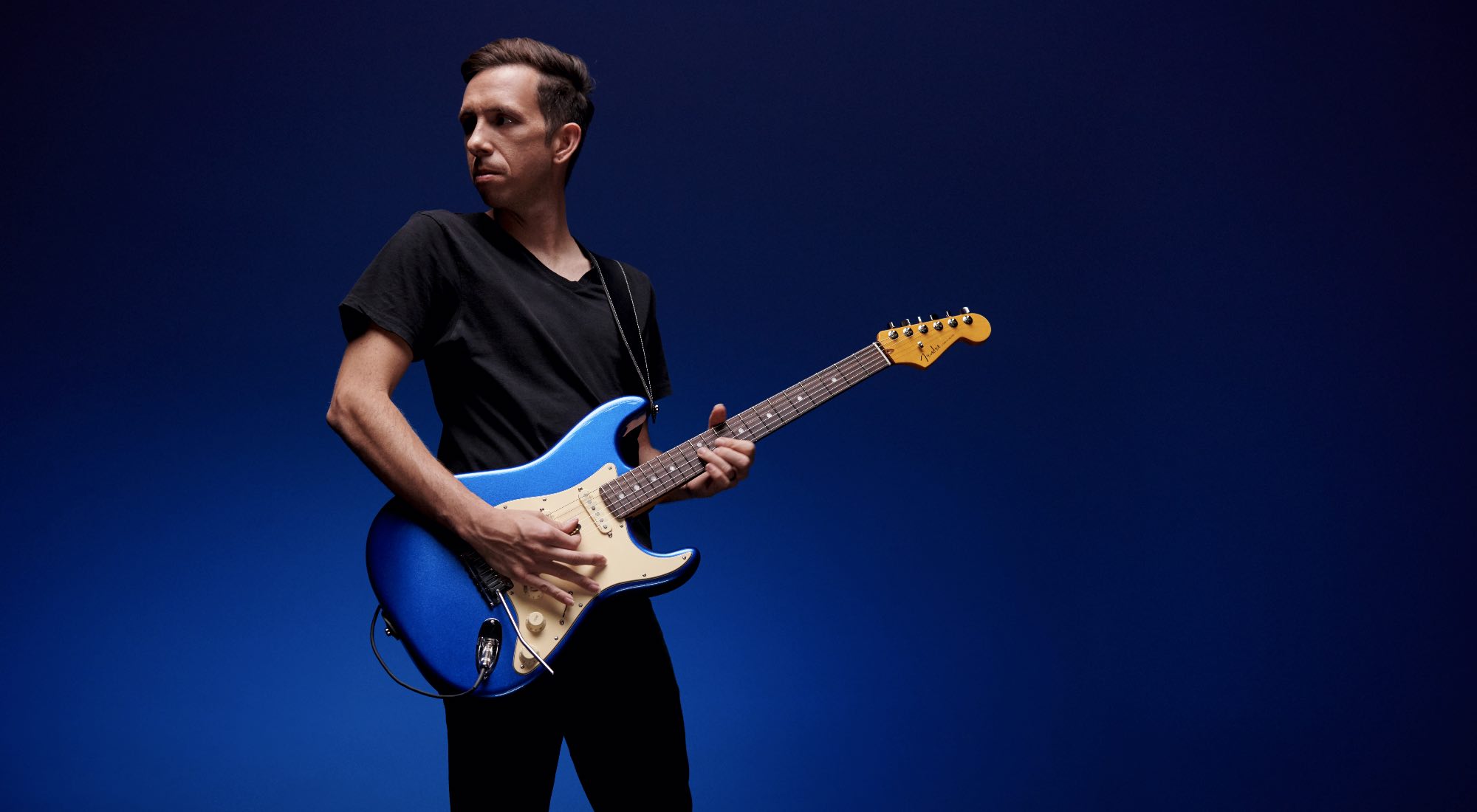 Released in late 2019 as the replacement for the short-lived American Elite range, the American Ultra series encompasses what Fender describes as its “most advanced” production guitars to date. Sporting flexible electronics and forward-thinking hardware appointments, as well as a few ergonomic construction tweaks, these innovative instruments are aimed at the most of modern of musicians yearning for ultimate precision and uncompromising tone.

The same core Fender models that form the American Professional II lineup are also what prop up the American Ultra series. Strats, Teles, Jazzmasters, Precision Basses and Jazz Basses can be found, but there is less variation overall – with only HSS Strats and 5-string Jazz Basses available outside of the standard models.

What Features do Fender American Ultra Guitars Have?

Fender’s American Professional II models have a contemporary twist, but the brand’s American Ultra guitars go one step further. These instruments are heavily-modified to suit the needs of 21st Century players; covering lots of sonic territory and providing unmatched performance. If you like old-school Fenders – these guitars really aren’t for you!

A host of new Fender colours were introduced for the American Ultra series. This included Cobra Blue, Mocha Burst, Ultraburst, Plasma Red Burst and the stunning Texas Tea, all of which remain exclusive to Fender’s American Ultra guitars and basses. However, there are less total colour options available compared to the American Professional II series – which has an eclectic mix of both traditional and modern finishes. 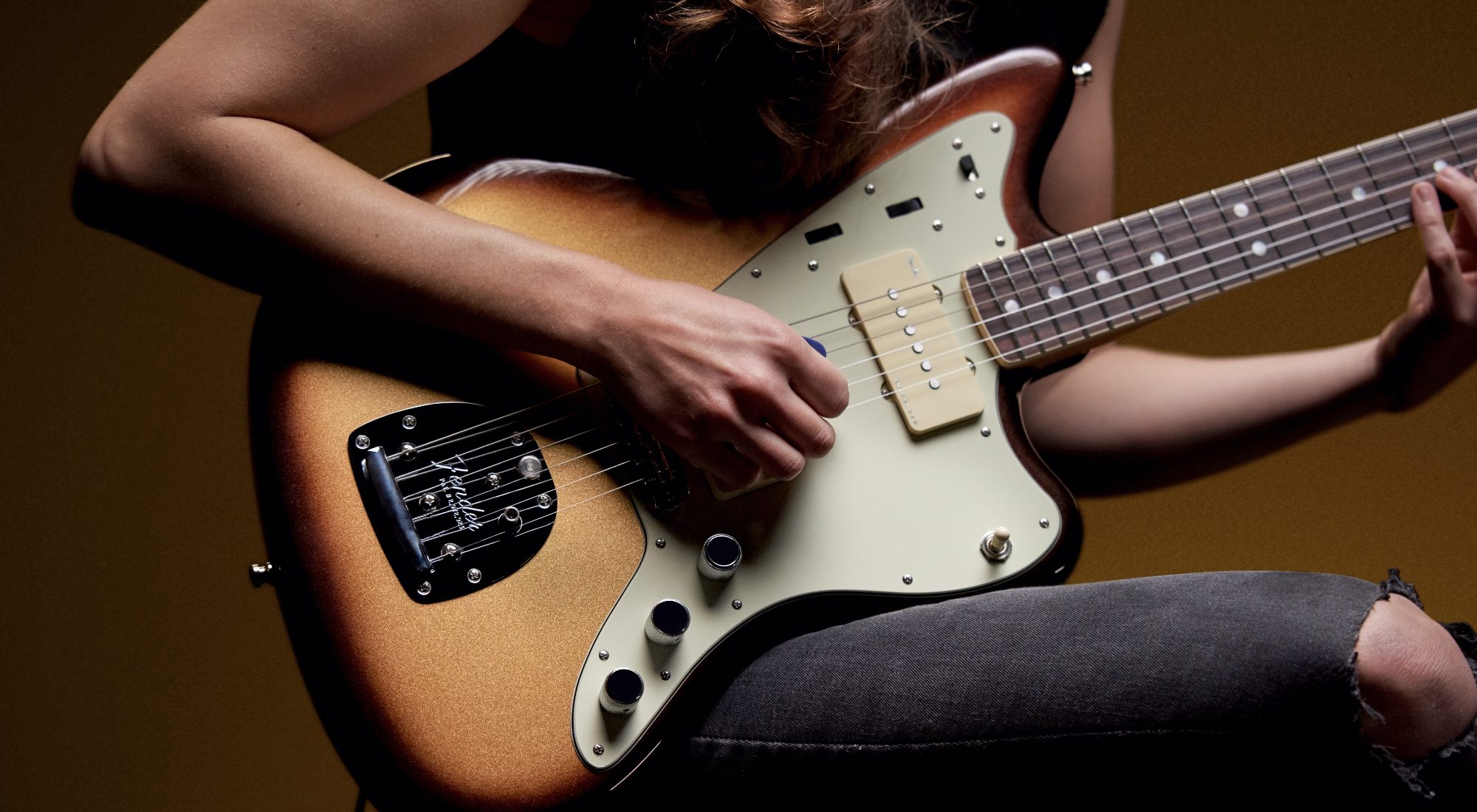 The only parts of Fender’s American Ultra instruments that remain traditional are their body materials. With Alder used for the solid-finish guitars and Ash employed for the natural/transparent colour models; these tonewoods hearken back to the classic Fender formula from the ’50s – with bolt-on Maple necks keeping their signature construction intact.

This isn’t a case of Fender playing it safe, but rather the brand wishing to keep the core elements of its guitars the same as they are what make a Fender – a Fender! However, American Ultra bodies are heavily-contoured at the rear – around their lower horn, neck and belly-cut sections. This gives them a sleeker and more elegant feel when compared with their American Pro II cousins. 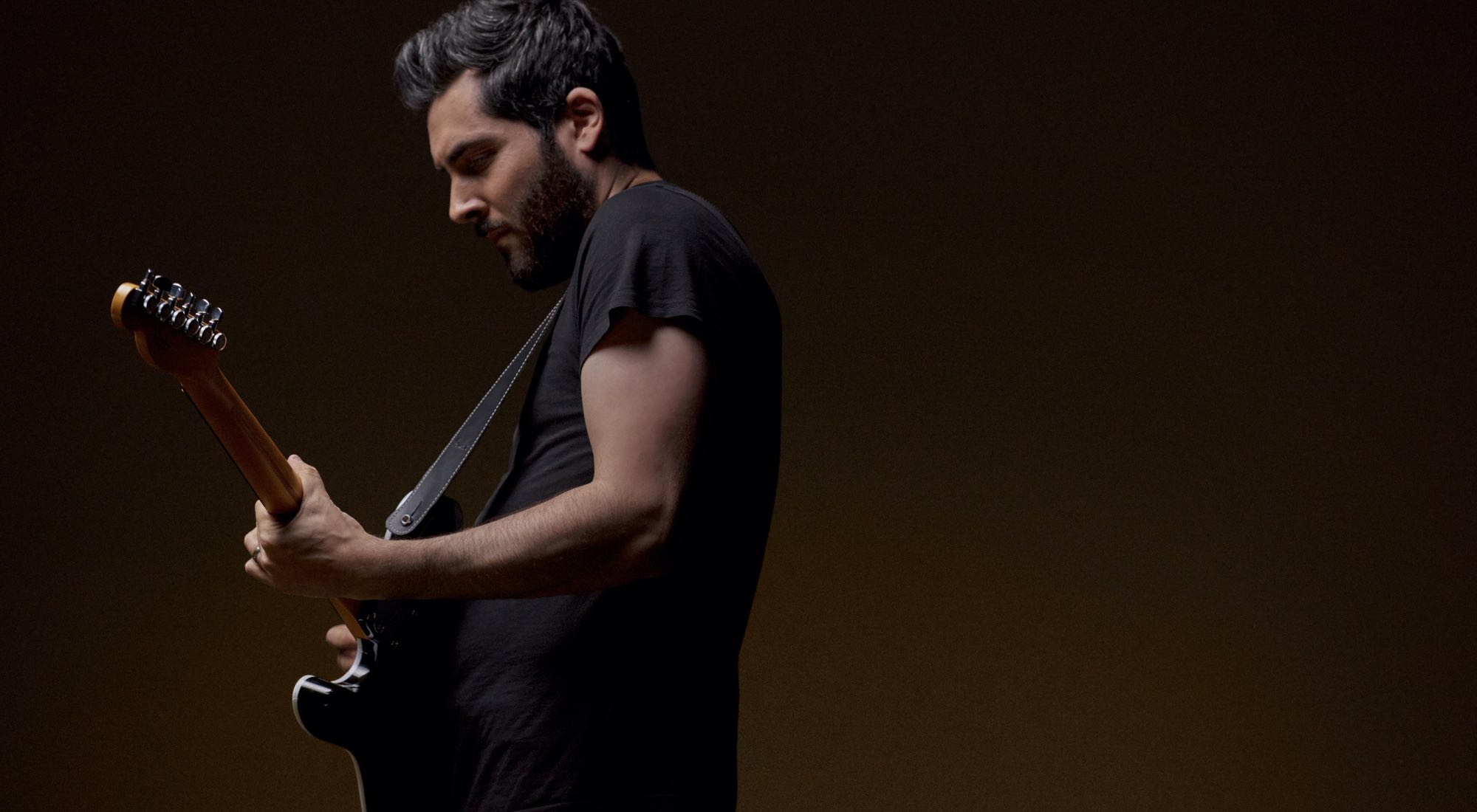 American Ultra guitars and basses are unique in the Fender catalogue for their non-typical Modern “D”-shaped necks. This thin profile offers optimal support for contemporary players, but is unlikely to appeal to traditionalists who prefer thicker, vintage-like neck carves or even the somewhat neutral Deep “C” profile that the American Professional II electric guitars have. But similarly to those models, Fender’s American Ultra instruments have smooth satin-finished necks that allow for fast playability.

Rolled fingerboard edges and tapered neck heels are also standard features across the American Ultra range. It could therefore be argued that Fender decided to tweak its American Professional line based on these updates that were introduced for the American Ultra series. However, the Ultras have neck heels that are more dramatically-contoured and thus offer virtually zero upper-fret restriction! 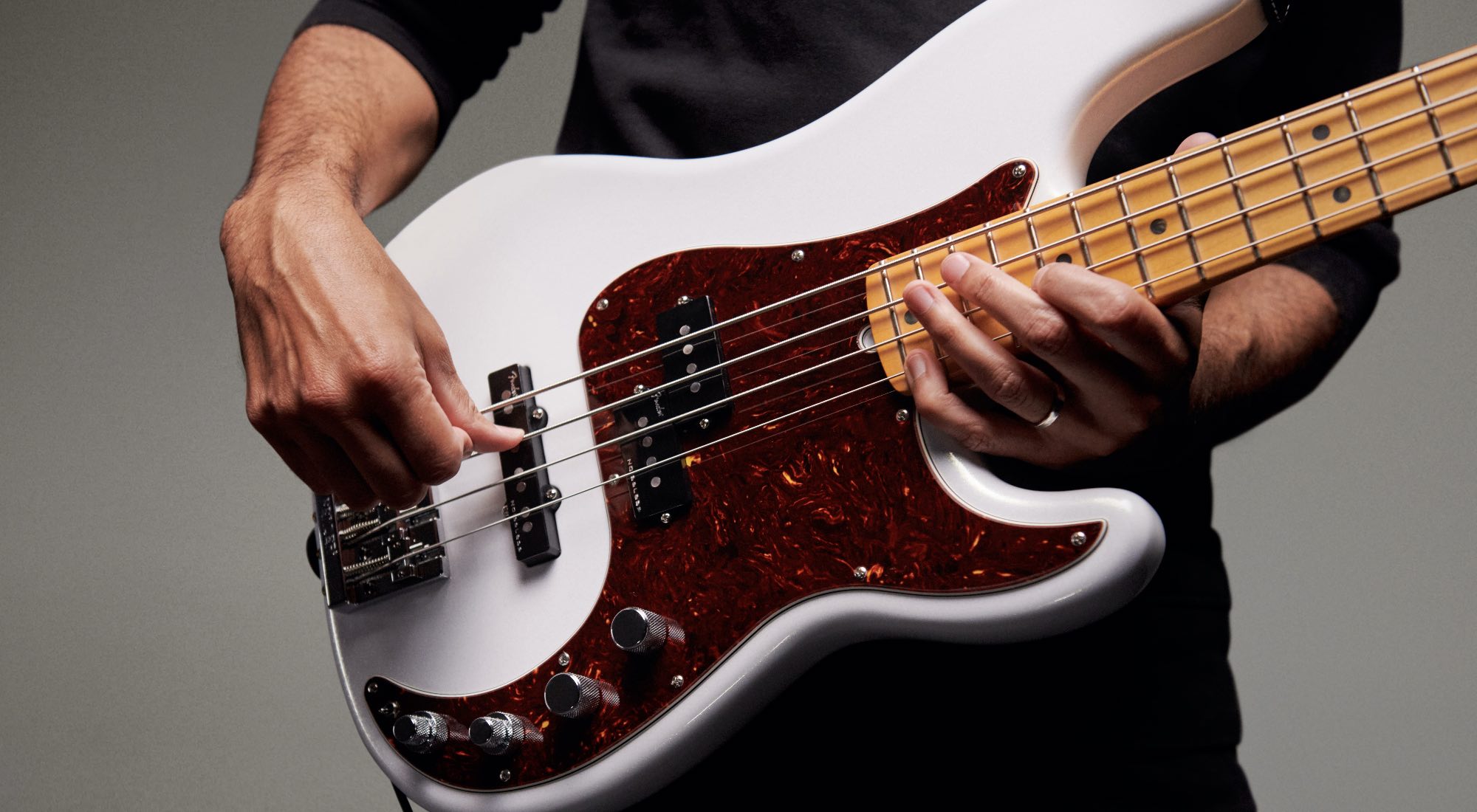 An additional plus-point, so to speak, of Fender’s American Ultra guitars and basses are their 10″ – 14″ compound radius fingerboards. Rounded at the lower end of their necks to make chords easier to play, their fingerboards flatten out in the higher register to make intricate lead lines more manageable to finger. This design also helps to prevent notes from fretting out when performing string bends, making it a very practical design.

On the subject of fingerboards, Fender’s American Ultra models come installed with ‘Medium Jumbo’ frets. These are bigger than the ‘Narrow Tall’ frets fitted on the American Professional II guitars, with their modern size providing a more controllable feel and enhancing tone/sustain. 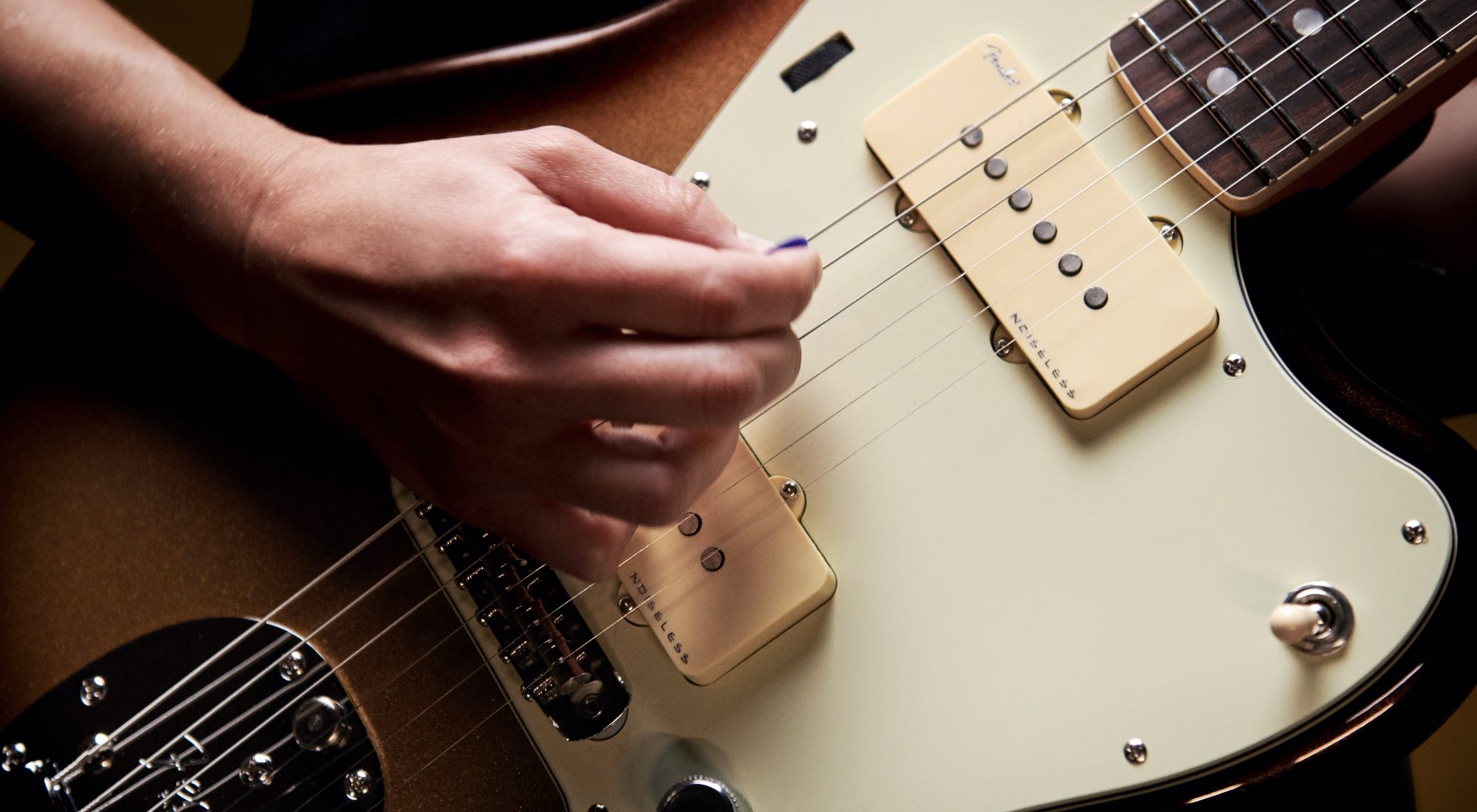 Taking Fender’s “Noiseless” design to new heights, the ‘Ultra Noiseless’ pickups found in the American Ultra models promise classic yet versatile tones – without any hum! Making them apt for use with overdrive and high-gain amp settings, these noise-free pickups eliminate a common issue that has afflicted old-school Fender single-coils for years. 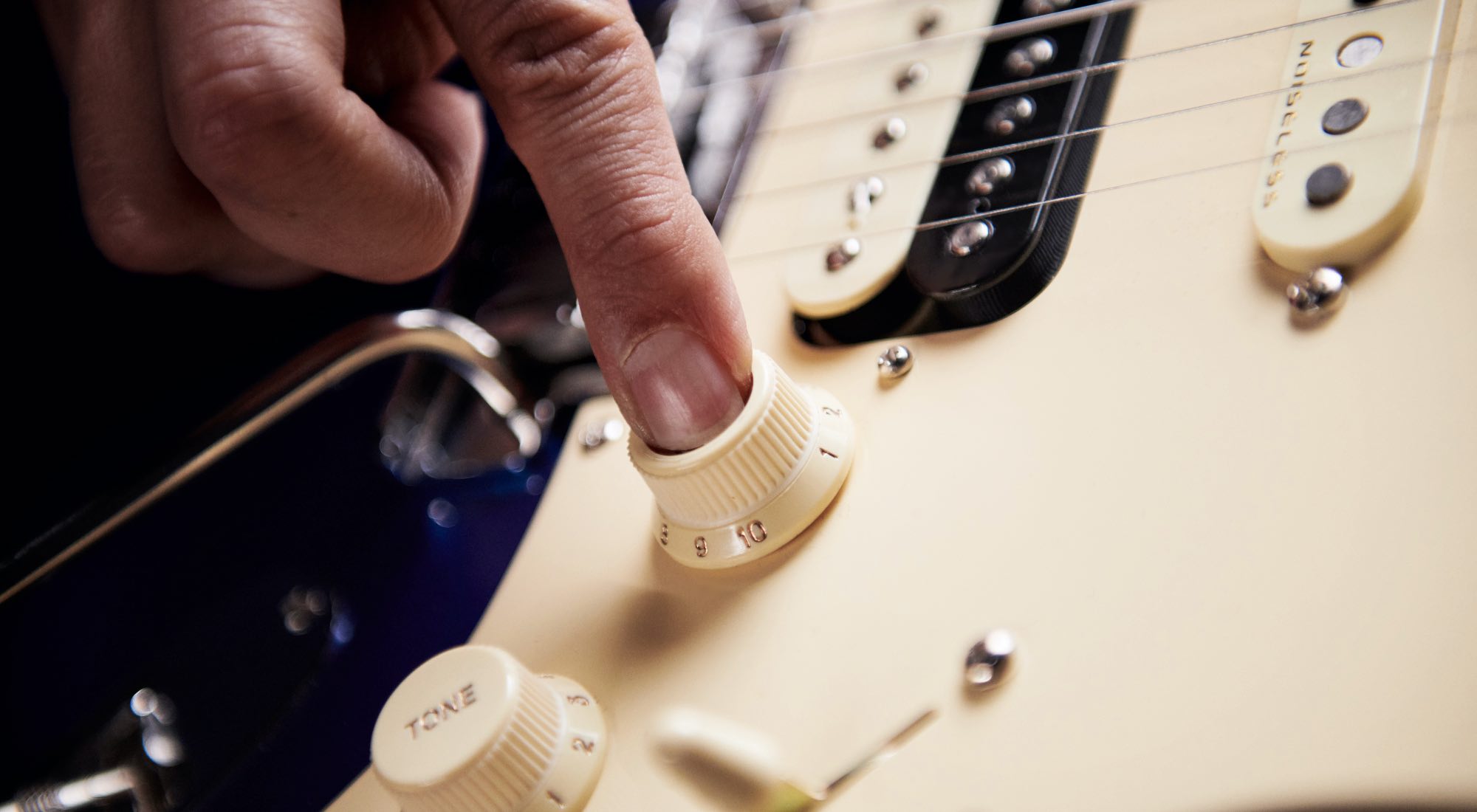 The Fender American Ultra basses go a major step forward though, with their super-tweakable electronics likely to find favour with fastidious players. Sporting active/passive switches, these allow you to quickly change between vintage and modern voicings with a simple flick, while flexible 3-band EQ systems enable you to precisely sculpt their tones to perfection. 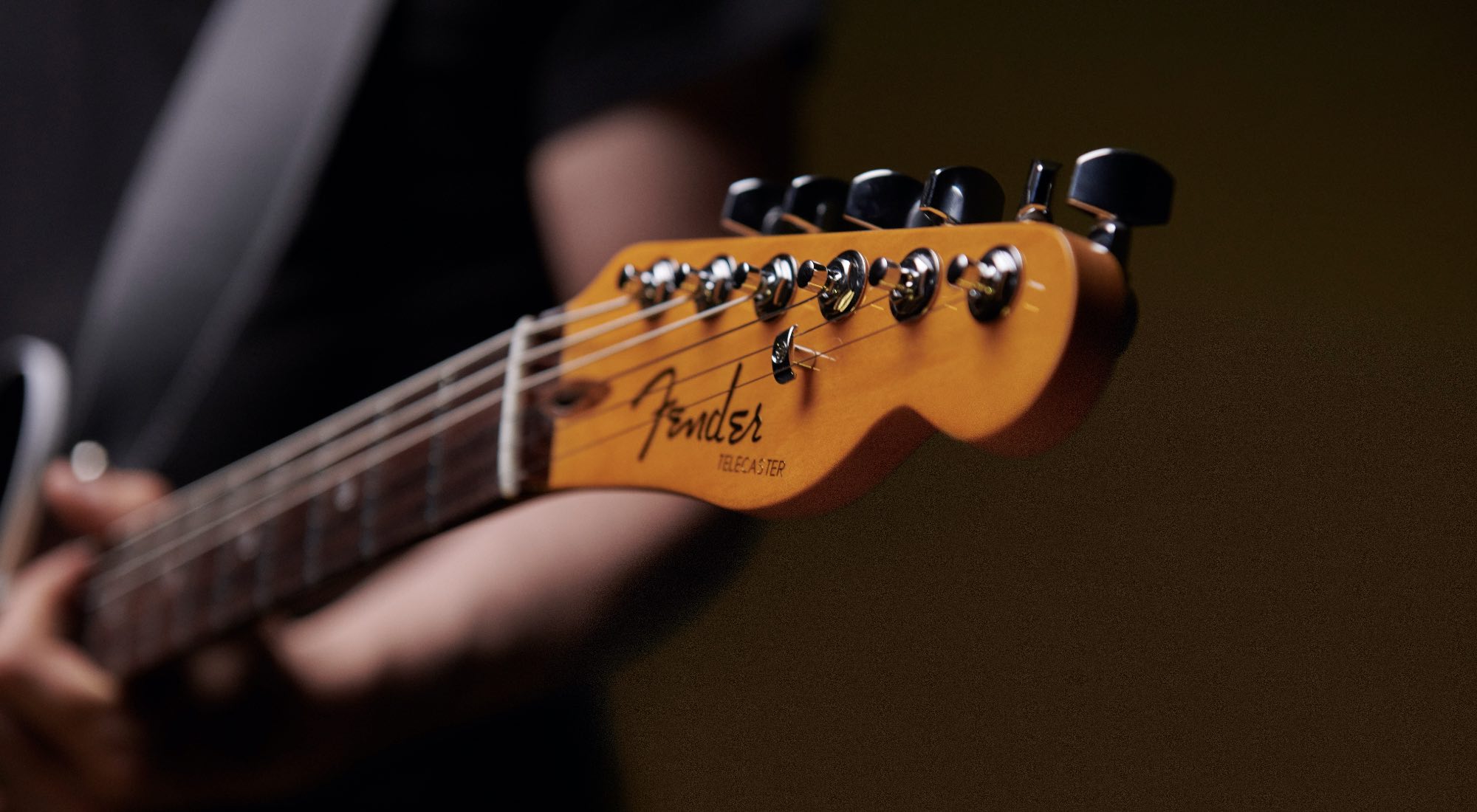 A number of stellar hardware appointments really make Fender’s American Ultra instruments something to behold. The most noteworthy of these are Fender-designed Deluxe locking tuners – fitted as standard on the electric guitar models. Ensuring sublime tuning stability in conjunction with their low-friction bone nuts, these ergonomic machine heads also allow for lightning-fast string changes. These are not factory-fitted on the American Pro II guitars, but can be purchased as an aftermarket upgrade.

The basses haven’t been left behind either when it comes to their hardware. With both the American Ultra Precision Bass and Jazz Bass models boasting HiMass bridges, these specially-designed components guarantee piano-like sustain and huge, bellowing lows. Lightweight tuners are also installed on these basses, which prevent neck-dive and thus make the instruments more balanced in standing positions.

It’s clear that Fender’s American Professional II and Ultra instruments are exceptional. Based on classic designs and subtly-modernised with forward-thinking features, these contemporary guitars and basses can strike a chord with players of all disciplines and styles. But is one of these flagship Fender series’ clearly better than the other? No, not really.

As it turns out, these US-crafted models are fairly equal on paper. The American Ultras have a slight edge when it comes to their pickups and hardware appointments, but that is reflected in their pricing. You could then perhaps argue that the Fender American Professional II guitars, which have been refined with Ultra-like tweaks, offer more “bang-for-your-buck” and are clearly better than their predecessors from the original American Pro range.

There’s also greater diversity within the American Professional II series, not only in terms of colour options, but also with Telecaster Deluxe models and more 5-string/fretless bass variants available. However, although less product variation might seem like a downside for the streamlined American Ultra range – it could be said that it forms a more robust lineup.

Overall, we’d probably say that the American Professional II instruments are solid Fender thoroughbreds with a 21st Century twist, while the American Ultra models are designed primarily for players seeking top performance and versatility. Modern guitar and bass players have never had more exciting creative tools at their disposal!