A modern day legend takes on the latest challenger – and it’s made by the same company. The Timeline may be on all the pro pedalboards, but should the Volante usurp its brother as king of delay?

Strymon’s Timeline is a renowned boutique delay pedal that quickly made its way into the setups of the world’s best and most creative guitarists. Its comprehensive selection of delay styles and parameters, unwavering sound quality and friendly connectivity options make it one of the go-to stompboxes – no matter the musical style or even the instrument.

The Volante, meanwhile, could be described as a supercharged El Capistan; one of Strymon’s famous smaller format delay pedals. It packs vintage tape delay in with spinning drum and reel-to-reel studio unit recreations. The outcome is a retro-leaning echo/delay, with the Californian company’s trademark extensive control layout.

You might be thinking: “They’re both delay pedals? Why would Strymon make two of the same thing?”

True to an extent, but you’d be ignoring the contrasting tonal differences and in-depth sound options. Let’s take a look at what makes the Timeline and Volante pedals unique: 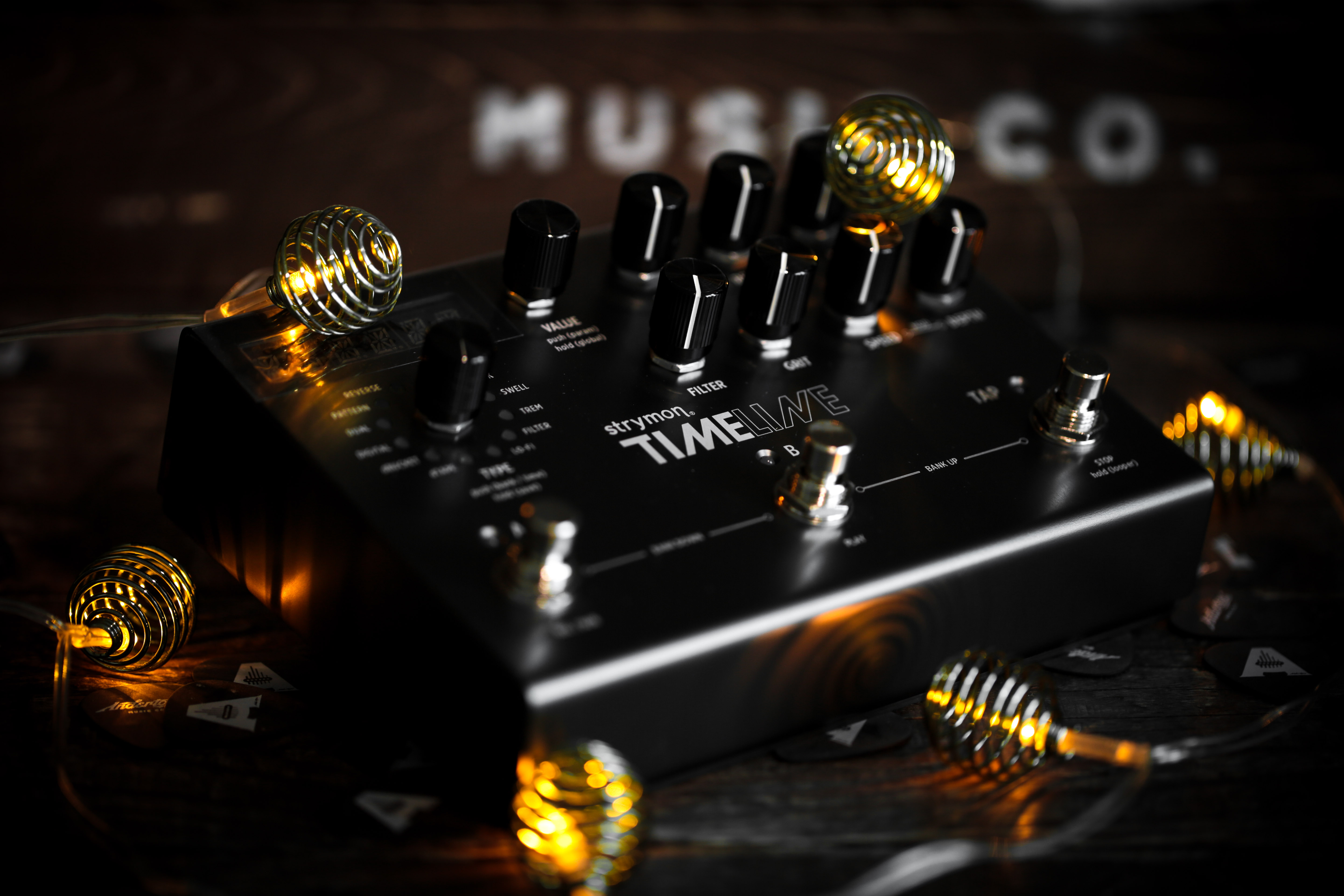 The Timeline handles digital, tape, bucket, ambient, reverse delay and plenty more with absolute ease. Its digital design lends itself to anything the Strymon engineers could pack into the one pedal. Overall, it houses 12 delay machines with seven control knobs to alter the qualities of each effect.

That’s a whole lot, considering each machine type has its own specific delay parameters, as well as extended features like infinite repeats, tap tempo and a looper with recording and overdub possibilities.

Controls include the standard Time, Repeats and Mix selections you’d expect on a delay pedal. Strymon take it one step further with a Filter, which lets you select the frequency range of the repeats and Grit, that adds distortion and artefacts. It also packs a separate modulation to add character to your delay. Alter these settings with Speed and Depth dials.

You can also design your settings externally thanks to MIDI connections and bank through the 200 built-in preset slots. Basically, you can customise whatever you like with the Timeline and you don’t have to throw any of the sounds away when you want a change.

There really aren’t any downsides to the Timeline. You can use it with guitars, synths or other string instruments. In addition, it runs in stereo and supports the Strymon MultiSwitch selector pedal or an expression pedal. One thing you might hold against it is that it doesn’t completely focus its efforts on a single type of sound, like the Volante. 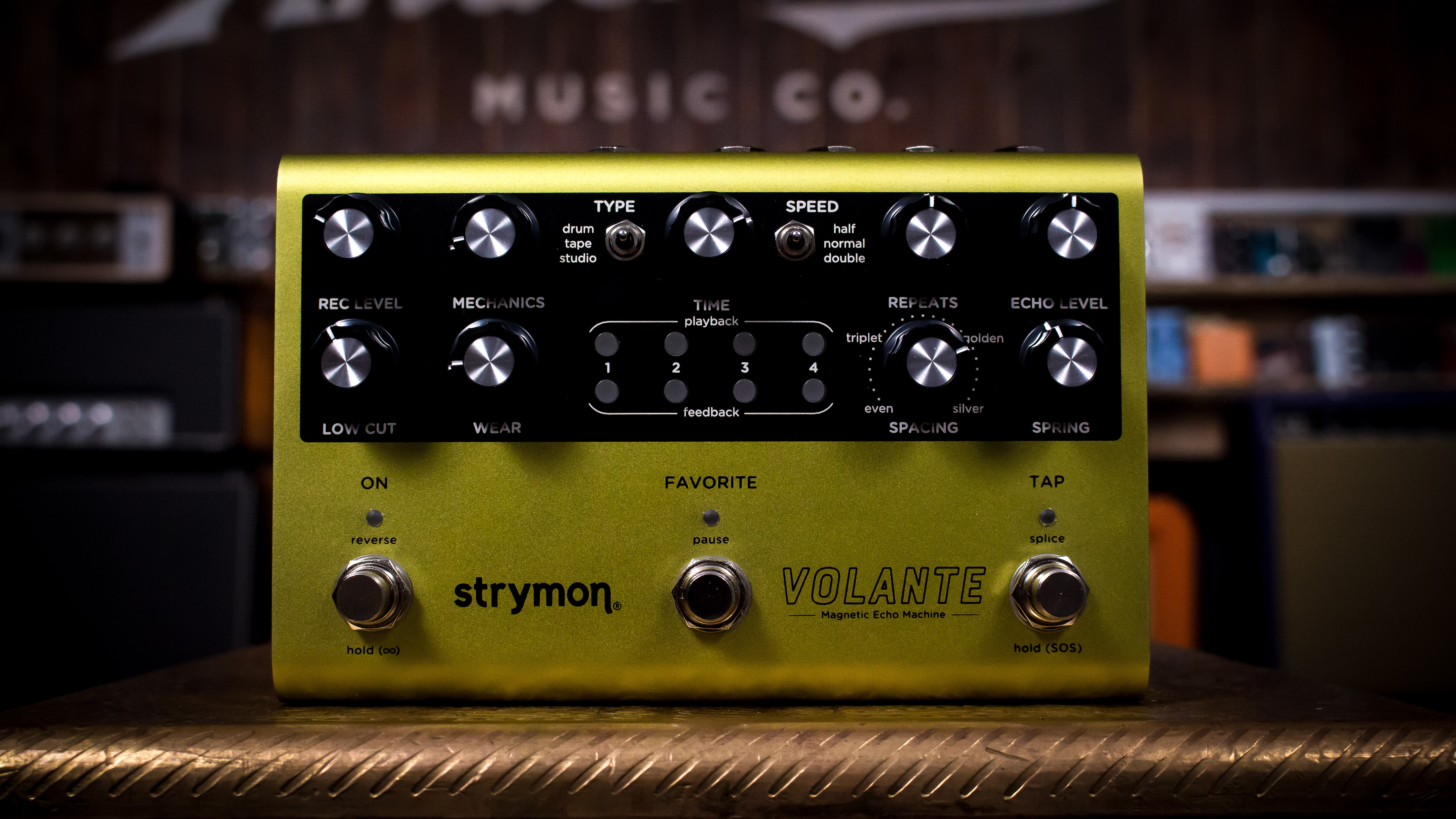 Strymon announced the Volante at NAMM 2019 and it definitely had an impact on the guitar community. It packs three iconic delays into one analogue, class-A unit with all-new settings not seen on any delay effect pedal before. It’s designed from the ground up to provide a specific retro sound, in contrast to the diverse Timeline. It sacrifices the number of delay machines for more tweaking capabilities. Based on the famous Binson Echorec which was known for it’s warm, fat, decaying delay tones.

Cut down to just the Drum, Tape and Studio machines, the Volante utilises dials like Wear, which sets the sound fidelity. For example, a new tape delay has a full-bandwidth frequency range but as it wears, loses the high-end sparkle. Wear captures this sound variation in a single knob.

This is just one of the many parameters that accurately reflects the old hardware it’s based on. The Low Cut dial shapes the low-end of the repeats, while Mechanics controls the irregularities and friction on the sound.

What you’ll notice right in the middle of the Volante interface are the Playback and Feedback buttons. These four heads determine the entry point of the delay and if an when you want the sound to get gritty. You can select any combination of heads to mix up the delay, meaning you don’t just have to stick with regular spacing like most pedals do.

On top of all this is a built-in spring reverb to add some lush wet signal to your delay, infinite repeat, and a reverse effect. You create anything from a small amount of slapback or echo to complex rhythmic patterns. There’s a whole world of creative possibilities with the tools you have at your disposal.

It also has all the same connections fitted on the Timeline such as stereo connectivity, MIDI and USB. The Volante only lacks the preset saving abilities, so you’re limited to just the two slots. 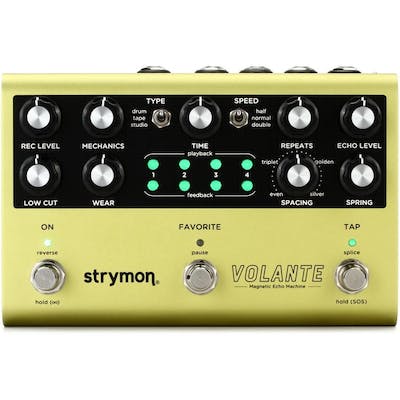 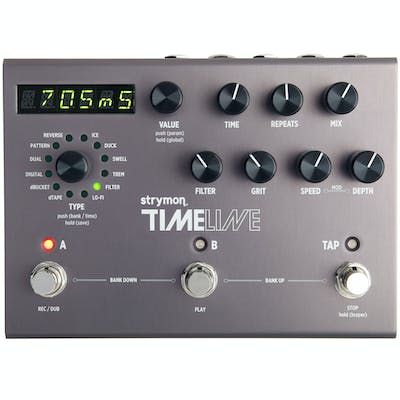 Should I buy the Strymon Volante or Strymon Timeline?

Are you looking for versatility or an accurate recreation of vintage effects? The Timeline is the more modern sounding of the two, has a huge amount of sound variation and has the ability to store everything you create. On the other hand, the Volante produces sounds every musician or producer would kill to hear. There’s just as much to explore, too, using the analogue controls and playback buttons. Don’t underestimate how brilliant the legendary original tape and drum delays are – and you could get all of them in one pedal.

Essentially, the Timeline is best for the player who wants loads of sounds and isn’t afraid to experiment. You’re likely to be a more modern musician who enjoys the occasional classic delay or echo. You might want to incorporate the pedal into a MIDI setup so you get a better view of what you’re creating.

The Volante is suited to musicians who like the classic sounds of the original tape delay. This pedal is the best of the best without being the real thing. Perfect for blues, rock or clean passages in modern songs.

If you enjoyed this read check out more of our Labs articles!