Compact acoustics are more popular than ever. Often brandished by chart-topping artists, they’re something of an in-thing in the guitar world, and have been for the best part of this decade.

For decades, the acoustic guitar was largely synonymous with big-bodied, booming tone. Smaller instruments always had their place, particularly in the folk and blues movements of the early 20th Century. But in recent years, compact acoustics have seen a surge in popularity. As travel has become increasingly accessible, the demands of touring musicians have increased – and manufacturers have responded accordingly.

These handy little strummers quickly started appearing in the limelight. Ed Sheeran, Taylor Swift and Damon Albarn to name a few – started using them on stage, in the studio, in music videos. Practicality gave way to downright cool, and guitarists across the spectrum got in line for a piece of the action. In this article, we’ll take a look at two guitars that lead the charge: Taylor’s GS Mini and Martin’s LX1.

The specs in a nutshell:

The GS Mini has arguably become one of the Taylor’s most popular instruments. The Taylor Guitars brand is often associated with premium, cutting-edge instruments – kinda like the Tesla of the acoustic guitar world. And like the electric vehicle manufacturer, Taylor’s approach isn’t everyone’s cup of tea.

Having said that, if Tesla made a car that sold for £10k instead of £100k, we reckon it’d go pretty well. Enter the GS Mini; a beautiful little instrument that bears the Taylor name but comes in at sub-£700*. The most affordable model is usually priced around the £500* mark. So, other than the fact that it’s affordable for a Taylor, what makes the GS Mini so special? 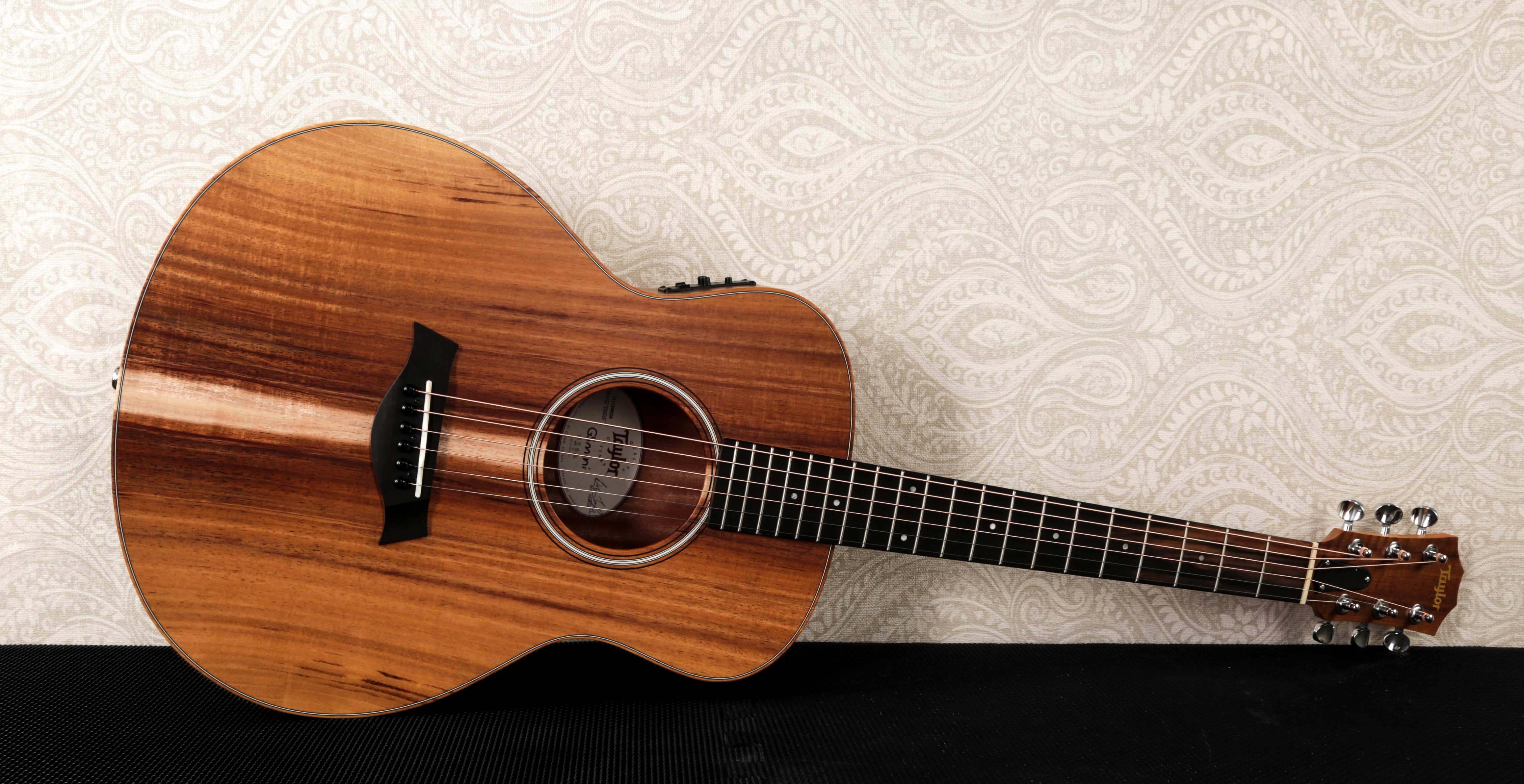 (above) An attractive Koa version of the Taylor GS Mini

Taylor fans and acoustic aficionados will recognise the company’s instruments from a mile off. The GS Mini fits right into the catalogue, with alluring jumbo-style curves. It’s a scaled-down version of their Grand Symphony model, debuted in 2006 (that’s a Grand Auditorium with a wider waist and broader lower-bout).

By sticking to this design, Taylor ensured that the GS Mini looked the part, and provided a comfortable playing experience. Yes, it’s noticeably smaller – but everything is proportionate, almost down to the millimetre. You’ll settle in in no time!

The soundboard is an essential component when it comes to an acoustic guitar’s sound. Taylor knew it’d have to be a solid, dynamic material, so they opted for a classic; Solid Spruce. Its balanced sound makes it a perfect jump-off point for pretty much any style.

Next up, Ebony is used for the fretboard and bridge. This adds a pronounced yet smooth quality to the attack of your guitar. It makes fingerpicking sparkle and gives strumming a brilliant edge. To top it off, Taylor have released a number of GS Mini varieties with different tonewoods; Mahogany, Koa and Walnut to name a few. 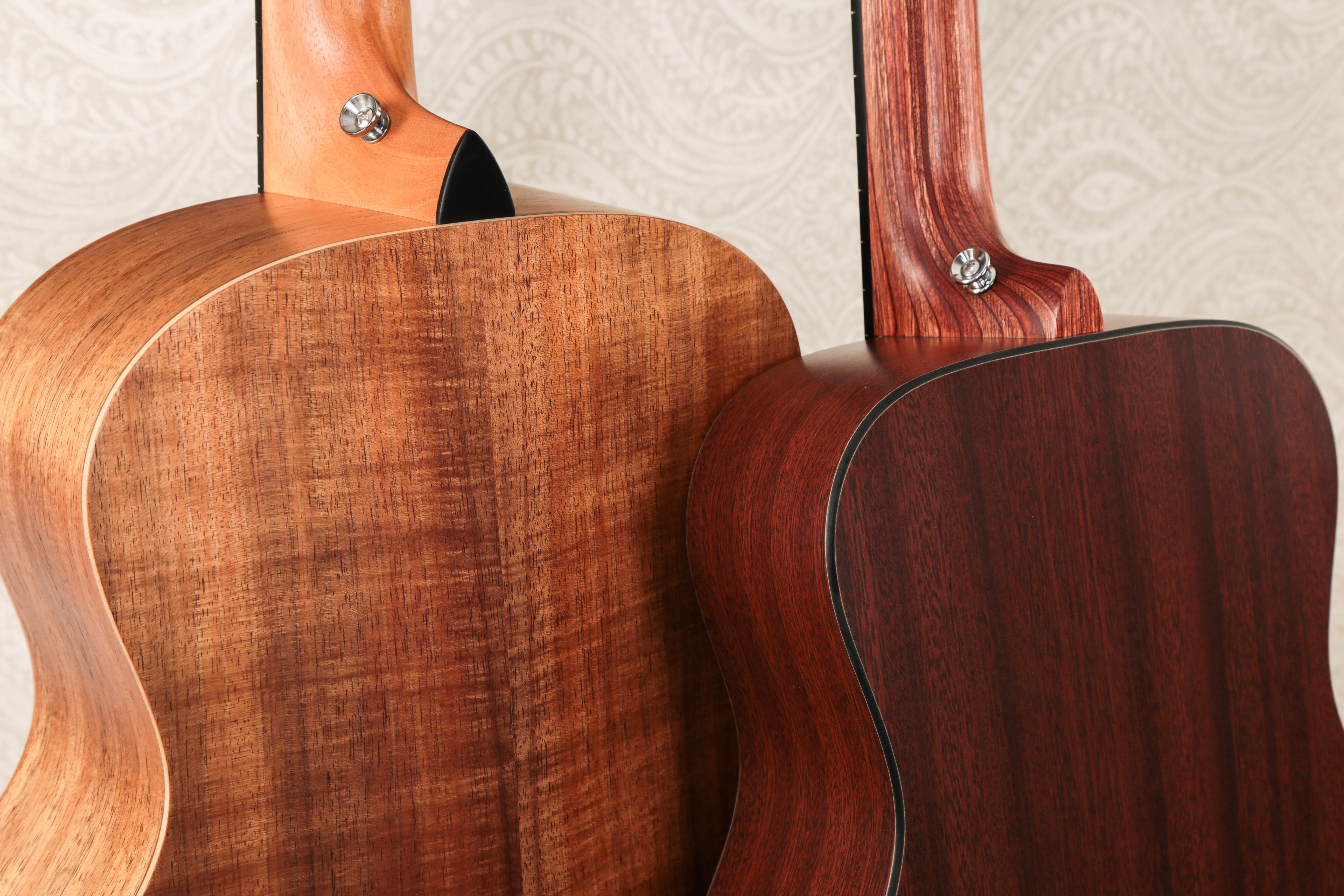 This is where the GS Mini comes into its own. It certainly looks great, feels great and the specs are great on paper. But, given its size and price point, the sound it produces is magic.

The Grand Symphony-style body ensures that this guitar really kicks out some volume. Expect booming projection, a rich midrange and crystal-clear treble response. The sound is so unexpectedly good, the GS Mini has won numerous awards and accolades. Not only that, but many guitarists have professed to using it in place of guitars that are 2, 3, 4 times the price*.

It records well, handles venues of all sizes, and comes with a number of great electronics options. The GS Mini-E model comes pre-fitted with Taylor’s popular Expression 2 system, a fully-fledged pickup/preamp that’s found in many of their high-end instruments. Taylor also specially designed the ES-Go after-market pickup to fit into the GS Mini with ease. It costs around £80*, making it a relatively affordable, easy upgrade! 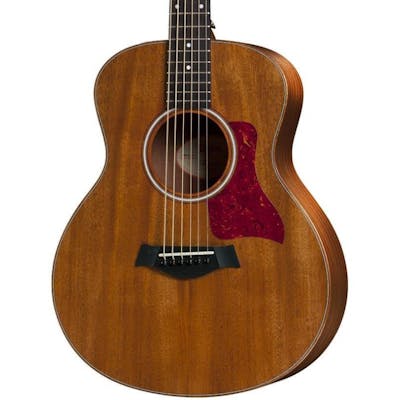 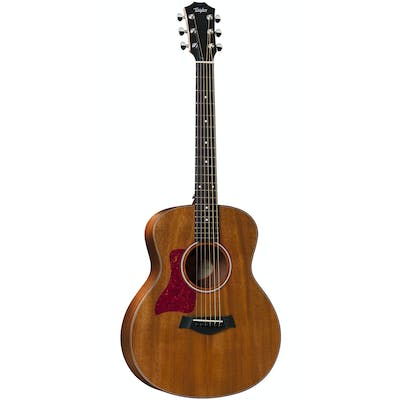 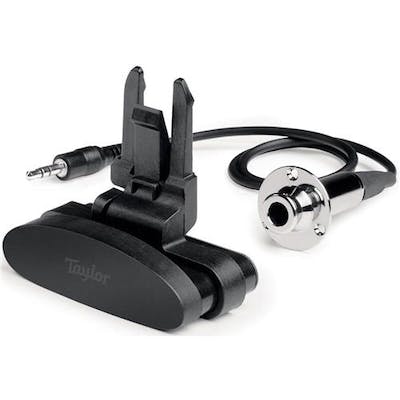 Affectionately referred to as ‘the Little Martin’, the LX1 is Martin’s take on the travel-style guitar. Unlike Taylor’s GS Mini, it could be considered a new body shape rather than a scaled-down classic. Martin designed it from the ground-up, taking cues from their colourful legacy of market-leading acoustics.

Speaking of legacy, Martin have been in the business a fair bit longer than Taylor. Their thoughtful design and attention to detail is always apparent, no matter the series or model. Combine that with something this compact and affordable, and you’re potentially onto a winner. But can the LX1 compete with Taylor’s cutting-edge approach and undeniable value? Let’s look at the Little Martin’s selling points.

Let’s start with the obvious: the LX1 comes with a lower price tag than its Taylor-made counterpart. In an industry that gets more competitive by the day, price is a hugely important consideration. Coming in at just under the £400 mark*, it undercuts the Taylor by around 20% – a pretty significant saving. This potentially puts the Martin within reach of a slightly larger audience.

This audience is ever-expanding, largely due to you-know-who. Sheeran rose to fame with his LX1 by his side, and it inspired a whole generation to pick up the guitar and play along. He’s since released a number of signature models and worked with other manufacturers, but the LX1 remains extremely popular – and Martin may, in part, have Sheeran to thank for that… 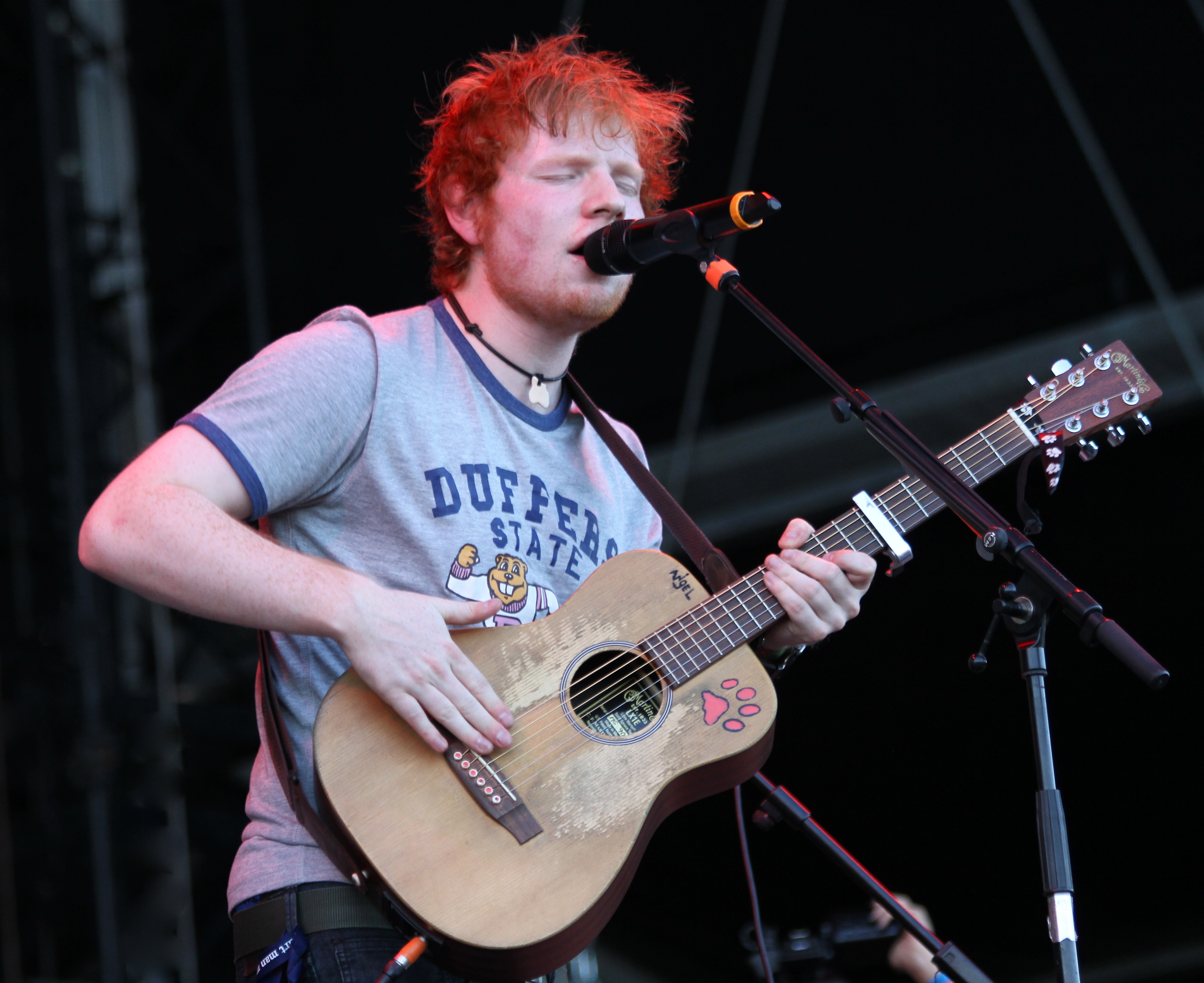 …not that Martin need some jumped-up award-winning 20-something singer-songwriter to help them sell their instruments. They defined the acoustic guitar as we know it.

C.F. Martin & Company has been around since 1833 (almost two whole centuries ago). As such, they kinda know what they’re doing. When they released the LX1, they did it with careful consideration of the market, great attention to detail and with absolute respect to the heritage of the acoustic guitar.

It’s not often that you get to be the owner of an instrument with so much cultural significance behind it – especially when it costs as little as the LX1 does. When you purchase a Martin, you’re investing in a little piece of history. We reckon that’s pretty darn cool.

Back to the tangible stuff – the LX1, like many of Martin’s guitars, has an HPL finish. HPL stands for high-pressure laminate, and it refers to the layers used in the guitars construction.

What’s so special about HPL though? We hear ya. First up, from your perspective – the player, the proud owner – it feels great. No squeaky gloss to worry about marking or scraping. Just a smooth top layer that feels wonderful to play, and looks pretty wonderful in an understated sort of way.

Next, the HPL approach gives the LX1 a certain toughness to it. It makes the guitar far less susceptible to environmental side-effects like warping and cracking finishes. This is particularly crucial given the fact that the LX1 is designed to be a travel instrument!

In addition, the HPL finish is tough as anything. Scratches, dings, scrapes – it takes quite a lot to mark this little guy. Luthiers will tell you that it’s pretty impervious to many chemicals and nasty stuff (beer included) – though we wouldn’t recommend putting it to the test if you can avoid it. 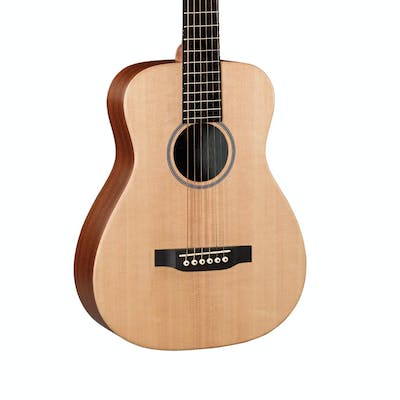 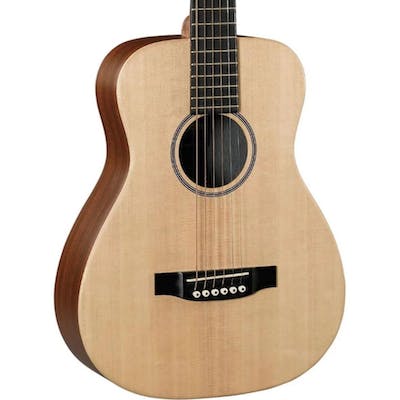 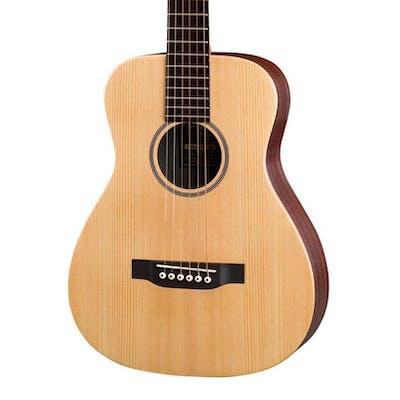 *all references to price are based on value at the time of writing and are subject to change!

Well, there you have it. For years, guitarists on the search for a compact or travel acoustic have found themselves at this exact fork in the road.

If we had to sum it up, we’d say that the Taylor is a workhorse instrument that sounds as great in real life as it does on paper, thanks to a great selection of woods. The Martin is a truly accessible instrument that is truly built with the nomadic musician in mind, and it comes with a suitable helping of acoustic mojo. Go forth and strum!

If you’re in the market for a new acoustic, check out our full range right here. If you enjoyed this piece, you can find plenty more right here on our blog – enjoy!