BOSS Waza-Air Headphones – Everything You Need To Know!

BOSS' Waza-Air amp headphones prove that their stellar reputation for innovation is strongly justified. Released just two months after the launch of their flagship Katana MkII amp range in late 2019, this intriguing product has gone on to become an absolute modern classic!

Over the last few years, BOSS has dominated the digital amp market with its Katana series. First introduced in 2016, these versatile guitar amps have been universally-praised for their convincing valve sounds, high-quality built-in effects and incredible affordability. It’s no surprise they’re best-sellers not only for us, but worldwide!

While the Katana catalogue encompasses a range of combos and even features a head and matching cab, BOSS has also branched out with its Katana lineup. Alongside the core amp range, BOSS introduced the petite, battery-powered Katana Mini a couple of years ago and unveiled the Katana Air shortly thereafter. The latter was particularly noteworthy, as it was hailed as the world’s first truly wireless guitar amplifier. 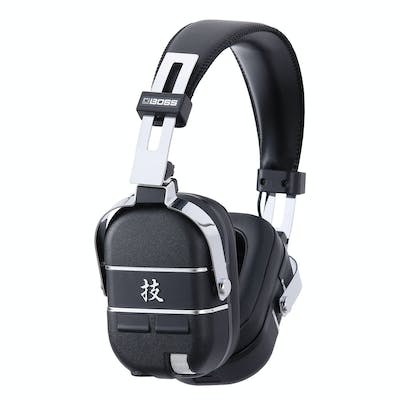 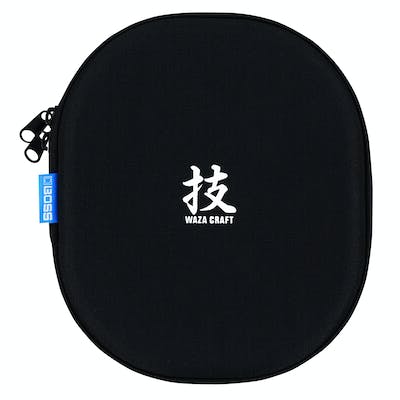 BOSS’ Waza-Air headphones take inspiration from the innovative Katana Air but they’ve squeezed that technology into an even more compact and ergonomic form-factor. Essentially, BOSS’ Waza-Air wireless guitar headphones provide users with their very own personal amplifier system. In other words — a pair of headphones with built-in amp sounds! But there’s far more to them than that.

Fusing BOSS’ legendary amp and effect sounds with groundbreaking spatial technology, BOSS boldly promises that “the revolutionary Waza-Air takes the guitar experience where it’s never gone before”. In this blog, we’re going to fully explain the impressive functionality of this game-changing product. Is it a contender for one of the best pieces of guitar gear ever made? We think it could be.

How Do BOSS Waza-Air Headphones Work?

Guitarists listening to themselves playing through a pair of headphones isn’t exactly new. In fact, most would probably say that, at some stage, they’ve used their amp’s headphone output or perhaps a software-based amp simulator as a means of practising quietly. And even professional musicians recording in studios and playing onstage use headphones or in-ear monitors to hear themselves in a band mix.

However, most guitarists would probably also agree that traditional headphones don’t provide a natural playing experience. They typically sound flat, anaemic and are incapable of replicating the character or ambience of an amp being played in a space. That is, until now… 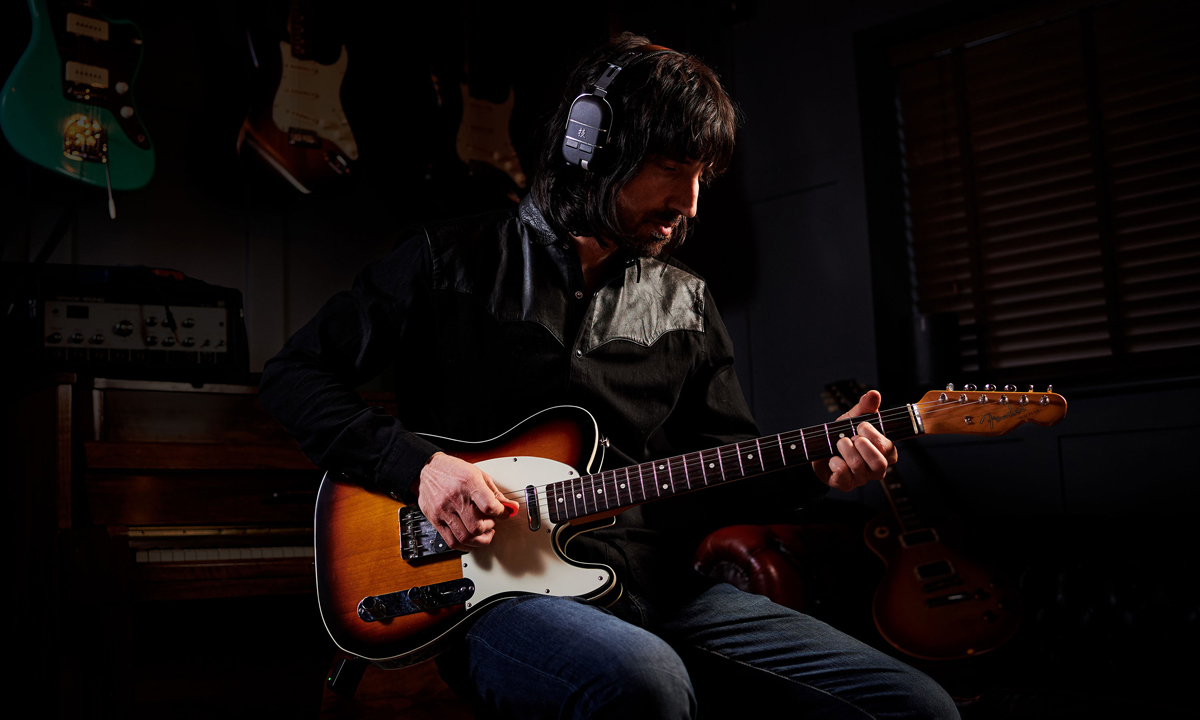 BOSS’ stealthy-looking Waza-Air headphones go above and beyond the other headphone-based amps we’ve seen before. Much further, in fact. Restoring the resonance, presence and “moving air” sensation that’s often lost when using conventional cans, BOSS Waza-Air headphones offer an immersive sound to ensure an inspiring experience. And with their over-ear design and large, custom-designed 50mm drivers; they’ll cancel-out most background noise so you’ll feel truly “in the zone”.

But wait — there’s more! Using an integrated gyro sensor to detect your head movements as you play, this technology then drives sophisticated 3D algorithms, providing a spatial realism akin to playing through an amp in a room. This means the character of the amp sound changes and even moves left or right depending on the position of your head. It’s like VR for your ears!

You can also make use of the Waza-Air’s three ambience setups to emulate three different environments. This is accessible via the accompanying (and free) BOSS Tone Studio mobile app, which connects to the Waza-Air headphones with Bluetooth. The ‘Surround’ mode emulates the three-dimensional sonics of an amp placed in a virtual room, but the ‘Static’ setting adds even more authenticity by changing the combined amp and room sound depending on where your head is placed. ‘Stage’ mode delivers more of a “live” feel by moving the sound to the back of your head, thus imitating the sound of an amp backline behind you on a virtual stage. 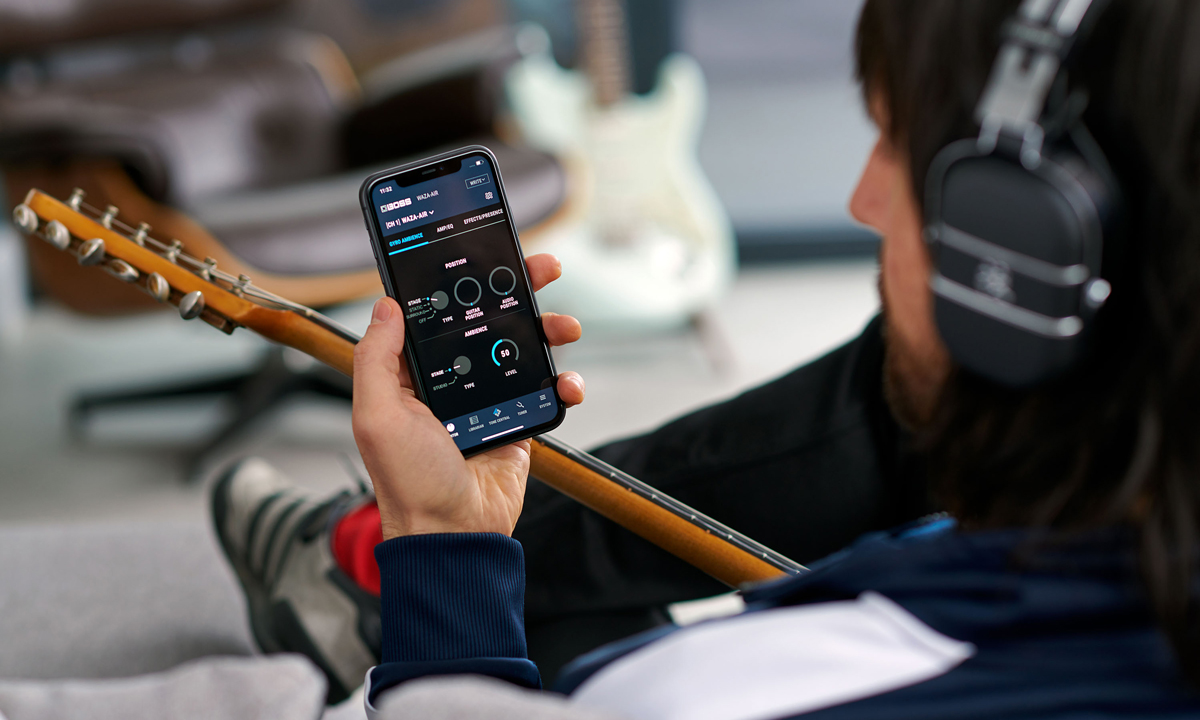 Speaking of the BOSS Tone Studio app, this user-friendly software truly unlocks the full capabilities of the Waza-Air headphones. Not only does it alter the amp placement and acoustic characteristics of virtual spaces like we explained, but it also allows you to experiment with an entire palette of different amps sounds and effects.

Giving you access to five unique amp types and parameters derived from BOSS’ Katana amps, you can shape anything from crystal-clear clean tones all the way through to searing high-gain lead sounds. There’s a ‘Full-Range’ voice too, which is ideal for the extended frequency ranges of basses and electro-acoustic guitars. BOSS Waza-Air headphones are designed with all types of musicians in mind.

The BOSS Waza-Air’s core amp sounds can be embellished with over 50 world-class effects, which are also accessible with Tone Studio. This includes lush modulation, reverb and delay effects that sound mesmerising with Waza-Air’s unique spatial experience. And of course, these effects can be easily customised to your specific tonal tastes with various virtual controls.

As with most modern digital amps, your very own carefully-crafted sounds can be saved and stored as presets for recall later. These patches can be switched either with the app or via the two buttons on the right headphone ear, with the thumb-wheel letting you adjust volume. While the Waza-Air headphones are able to store six onboard presets, you can save far more on the app and even download ready-to-play presets created by other users. 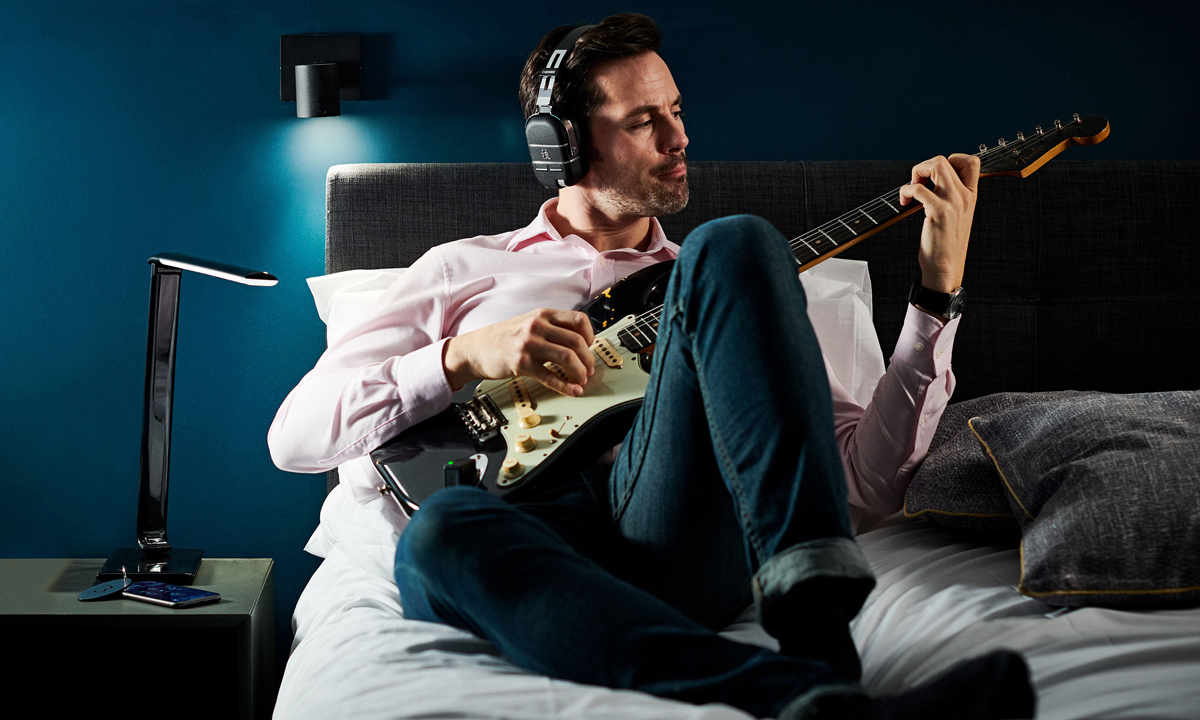 One of the coolest things about the Waza-Air is its wireless capabilities. Built-in Bluetooth not only allows you to connect seamlessly with BOSS Tone Studio, but it enables you to also stream music through the headphones from your phone, tablet or computer. So if you want to jam along with your favourite songs or backing tracks, you can do so easily and comfortably (just like the guy in the photo above). But if you want to feel like a bonafide rockstar, you can use the ‘Stage’ ambience setting to stream your music from the virtual backline behind you, along with your amp.

Perhaps more significantly, BOSS Waza-Air headphones provide a wireless, low-latency guitar connection. So if you’re worried about having to plug your guitar into the headphones with a 1/4″ instrument cable, you simply don’t have to. With the included BOSS WL-T wireless transmitter, you can plug this small device into your guitar’s output for completely cable-free operation, enjoying up to 5 hours of continuous playing time. Additional thoughtful touches include auto standby and wake functions, which conserve battery life between playing sessions. 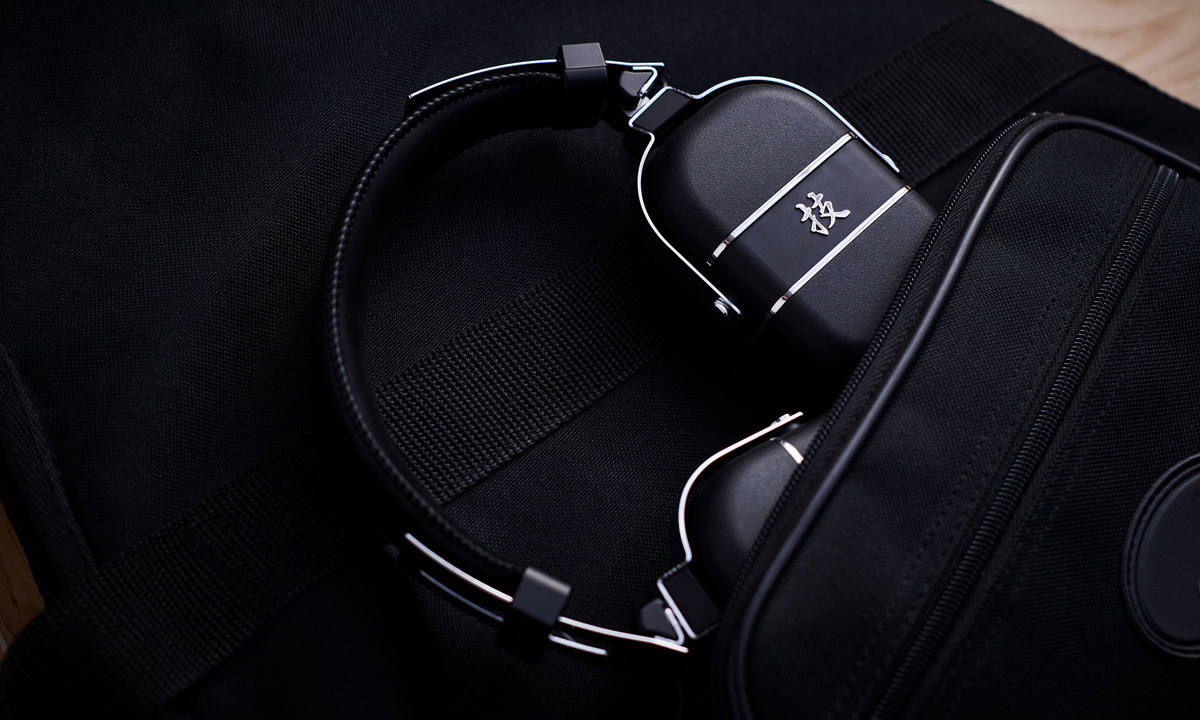 While all of the Waza-Air’s functionality is mightily impressive, it wouldn’t mean much if the headphones were uncomfortable to wear. Fortunately, BOSS has designed them to be very ergonomic, so that they don’t feel fatiguing during extended playing sessions. The conforming earpads gently cushion your ears and ensure optimal driver performance, with the wide headband not putting excessive pressure around your skull.

It’s worth mentioning that the headphones are very well-made too, with a highly-durable construction that features deluxe chrome-plated metal parts. They also have a contemporary two-way design that allows you to fold the headphones down, making it super-easy to store the BOSS Waza-Air headphones in a gigbag or a guitar case.

BOSS WAZA-AIR - Explainer by Alex Hutchings INSPIRING "AMP-IN-ROOM" TONE LIKE NO OTHER This video is intended to help you get the most from your BOSS WAZA-AIR and is the ideal starting point for anyone at the beginning of their new tone experience! Alex Hutchings kindly explains everything from the on board controls, to pairing to your device, to saving patches and more.See the time codes below for specific topics. 0:25 ONBOARD CONTROLS 1:31 GETTING STARTED 2:51 BUILT IN PRESETS 3:36 PAIRING AUDIO & STREAMING MUSIC 4:57 USING THE WAZA-AIR APP 5:40 GYRO AMBIENCE 6:00 STATIC MODE 6:20 SURROUND MODE 6:46 STAGE MODE 7:15 AMBIENCE SETTINGS 7:25 RESET THE GYRO 7:42 EDITING PATCHES 8:53 SAVING PATCHES 9:45 TUNING MODES 10:29 USING BOSS TONE CENTRAL 10:52 POWERING DOWN AND STANDBY MODE 11:34 CHECKING THE BATTERY LEVEL 11:53 CHARGING THE WAZA-AIR (AND TRANSMITTER) Fusing premium amp and effect tones with breakthrough BOSS spatial technology, the revolutionary Waza-Air takes the guitar experience where it's never gone before. ➤ BOSS WAZA-AIR debut video: https://youtu.be/v6n--QJ2QUI Visit boss.info for product information: ➤ BOSS WAZA-AIR Wireless Personal Guitar Amplification System: https://www.boss.info/global/products/waza-air/ ➤ BOSS WAZA-AIR FAQ: https://www.boss.info/global/support/by_product/waza-air/support_documents/33d2b35f-8c71-4add-af27-9ed6c1806adf/ ➤ SUBSCRIBE: https://www.youtube.com/bosschannel?sub_confirmation=1 #BOSSWAZAAIR #WAZAAIR #BOSSWAZA https://i.ytimg.com/vi/izs9DYbty6o/default.jpg PT12M34S 2020-03-19T08:30:07Z
68535 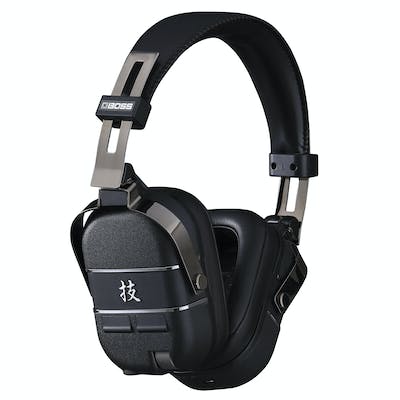