Fender's original offset body guitars, the Jaguar and the Jazzmaster, may look similar, but there are several key differences that set them apart. Find out here!

Fender’s iconic offset design is as elegant as it is recognisable. Both the Jaguar and Jazzmaster share this shape, so what’s the difference? Like identical twins – they might look similar but their personalities are vastly different. 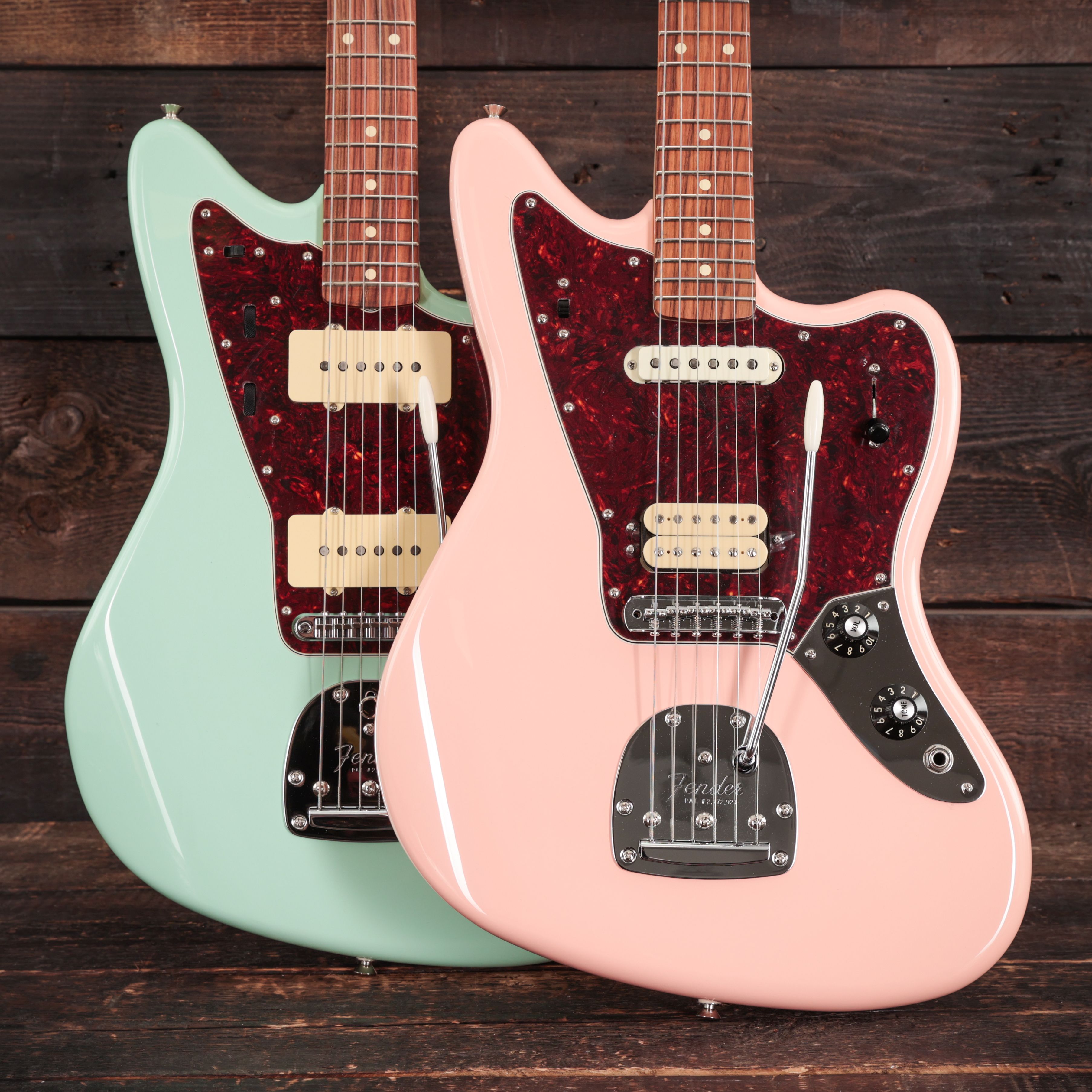 Introduced at the NAMM show in 1958, the Jazzmaster was the very first offset electric guitar. Before it became the go-to Axe for alternative guitarists, the Jazzmaster – you guessed it – was meant to be a Jazz guitar.

Upon its release, the Jazzmaster was advertised as Fender’s premier, top of the line guitar – which a price tag that reflected it, costing significantly more than a Telecaster or Stratocaster. It was the first guitar in Fender’s line to use a Rosewood fingerboard, which was seen as a premium feature compared to Maple. It was also the first Fender guitar to offer custom colours, such as Olympic White, Surf Green, and Candy Apple Red.

Whilst developing both the Strat and Tele, Leo Fender was putting prototypes in the hands of guitarists to get their feedback. This wasn’t the case with the Jazzmaster, which completely flopped upon it’s release. Big Jazz-box hollow-body guitars are still favoured to this day by Jazz cats – Fender had made a solid-body guitar for a market that never asked for it.

Quite surprisingly, instead of ending up in New York clubs, the Jazzmaster found popularity in the California Surf scene, for it’s bright, jangly tone and smooth tremolo system – perfect for reverb-soaked strumming.

Throughout the ‘70s, music was dominated by rock – with Gibson Les Pauls and SGs the flavour of the decade. It wasn’t until the end of the ‘70s that Jazzmasters reclaimed some popularity, thanks to the “New Wave”. Players like Elvis Costello made the Jazzmaster cool again as the anti-mainstream guitar.

The Jazzmaster has found continued success owing to My Bloody Valentines’ Kevin Shields, Sonic Youth’s Thurston Moore and Lee Renaldo, and more recently Dinosaur Jr’s J Mascis. Despite being designed as a Jazz guitar, the Fender Jazzmaster has somehow become the go-to for Indie and Alternative music. 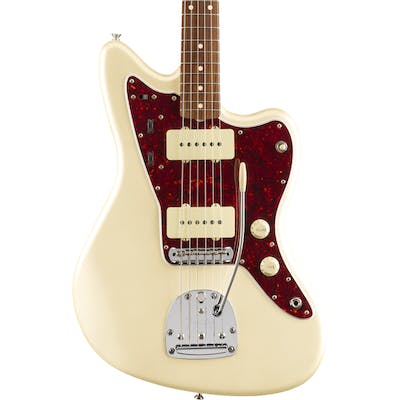 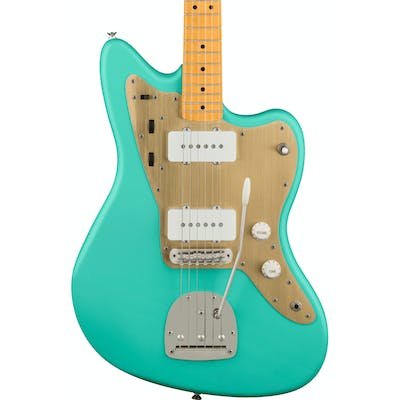 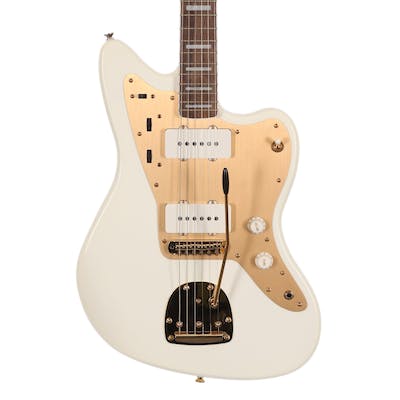 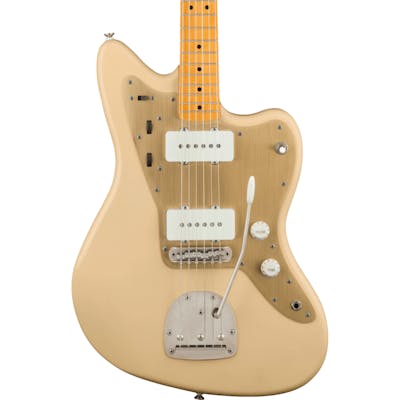 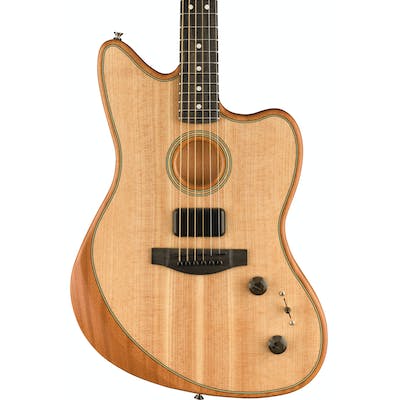 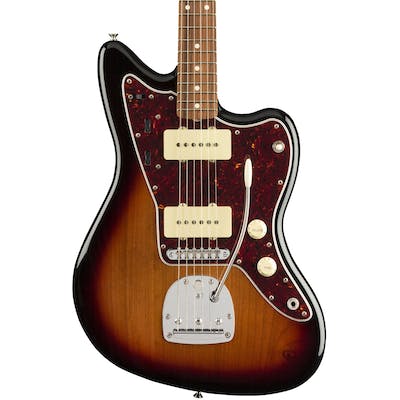 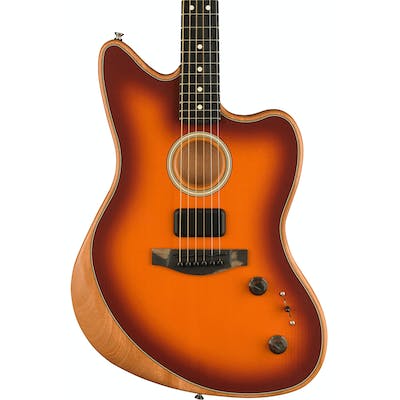 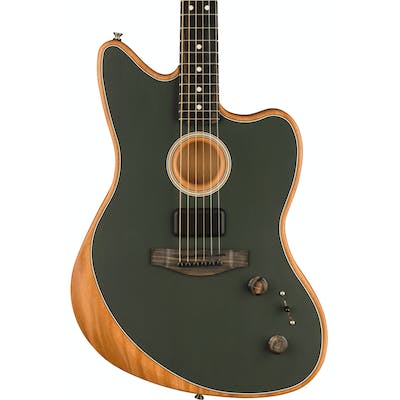 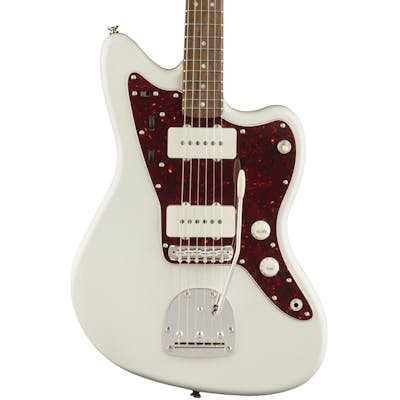 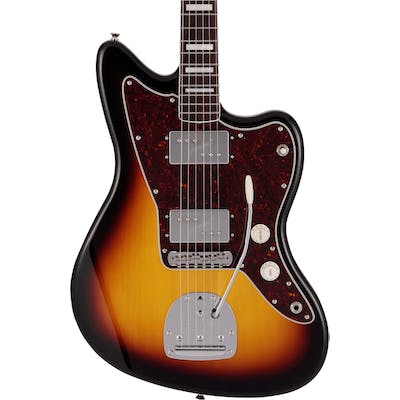 In 1962, the Jaguar became Leo Fender’s 4th and final electric guitar design before selling the company to CBS in 1964. After the Jazzmaster had rather surprisingly found itself in the hands of surf bands, the Jaguar was marketed directly to that emerging West Coast pop scene. 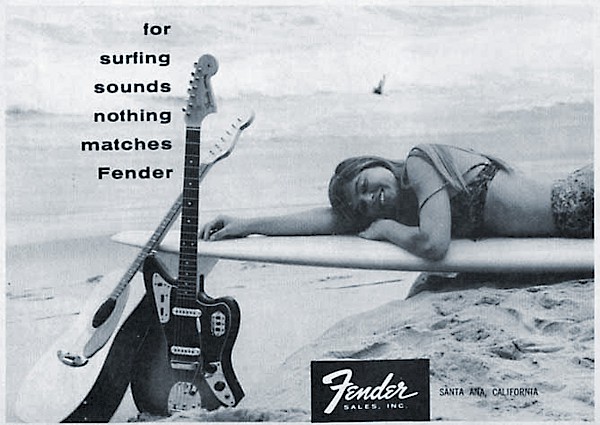 However, by the late ‘60s the surf scene had all but washed away. As the British invasion hit the radio-waves, Jaguars started collecting dust. And while the Strat and Tele continued to rise in popularity, Fender’s offset Jaguar and Jazzmaster faded into obscurity.

Around the late ‘70s, people started picking up old Jaguars in bargain basements and pawn shops around London and New York, as they had become significantly cheaper than Strats and Teles. The Jag was reborn in the emergence of Punk and post-punk. With its bright single-coil sound and peculiar “strangle switch”, the Jaguar had the perfect range of jangly clean to aggressive bite for this new sound.

The two most famous Jag players were Johnny Marr of The Smiths and Nirvana’s Kurt Cobain. Both bands typify anti-conformism and anti-mainstream. These legends have cemented the Jaguar’s status as the Alternative Rock guitar of choice. You’ll be sure to see Fender Jaguars on Festival stages up and down the country for years to come.

The Ultimate Guide To Owning A Fender Jaguar With a shorter scale & an iconic offset design, the Fender Jaguar makes a bold statement as one of Fender's most versatile guitars to date. Watch The Captain & Pete run-through their Ultimate Guide to owning a Fender Jaguar. | https://tinyurl.com/y7sguffe » Fender American Original 60s Jaguar In Surf Green | https://tinyurl.com/y7tfsjxr » Fender Vintera 60s Jaguar Modified In Sonic Blue | https://tinyurl.com/yag3xa7f » Fender Player Jaguar In Black | https://tinyurl.com/ybr7nbht » Fender American Professional Jaguar In Olympic White | https://tinyurl.com/ybjqpwsg » Squier FSR Classic Vibe 70s Jaguar In Daphne Blue | https://tinyurl.com/y8nr42ja ↪️ Episode Guide ↩️ » Intro Jam Between The Captain & Danish Pete (0:00) » History & Specs of The Fender Jaguar (4:15) » Fender Original Series Jaguar (7:04) » How does the Jaguar compare to the Jazzmaster? (13:28) » Fender American Professional Series Jaguar (18:00) » Fender Vintera Series Jaguar (25:19) » Fender Player Series Jaguar (31:50) » Squier FSR Jaguar (35:13) » Jazzmaster Vs Jaguar Shootout (37:06) » Outro Jam Between The Captain & Danish Pete (42:42) Released in the early 60s as Fender's "Jack of all trades" instrument, the Fender Jaguar offered tonal versatility, short-scale playability & a striking aesthetic that stood out from the crowd! Made popular by the surf-rock genre, the Fender Jaguar made its name as the guitar of choice for anyone wanting something a little different. The Captain & Danish Pete run-through all things Jaguar in this ultimate guide & help answer the questions you have always wanted to know about Fender's most versatile guitar! "Why Every Guitarist Needs A Jazzmaster" ➡️ https://www.youtube.com/watch?v=fTjivH2Lnc8 Check Out Our Guide To Offset Guitars! ➡️ https://www.andertons.co.uk/offset-guitar-buyers-guide Want To Sound Like The Captain & Pete? Check Out Their Rigs Here! ➡️ The Captains Rig | https://www.andertons.co.uk/captain-andertons-rig ➡️ Danish Pete's Rig | https://www.andertons.co.uk/danish-petes-rig 👕 Buy A T-Shirt 👕 | https://tinyurl.com/vdq7rmg You've watched the videos & seen the store, now join the Andertons Family with our exclusive, official merchandise! With free UK delivery on all orders containing only a T-Shirt, Hoodie or Jumper & super low international shipping costs, there is no better time to be an Andertons fan than now! Interested in other Andertons YouTube channels? Click on one of these links to find out more… Andertons Guitar & Bass YouTube Channel | https://goo.gl/kRJCpb Andertons Drummers YouTube Channel | https://goo.gl/9yKSS9 Andertons Synths, Keys & Tech YouTube Channel | https://goo.gl/ns172M Andertons Shopping Website | https://goo.gl/TPsG2Q Make sure to subscribe to Andertons TV for more great videos like this: https://goo.gl/aAzyQM #Andertons #OffsetGuitar #FenderJaguar https://i.ytimg.com/vi/EFILTiCENEQ/default.jpg PT46M38S 2020-04-23T14:00:04Z
307223 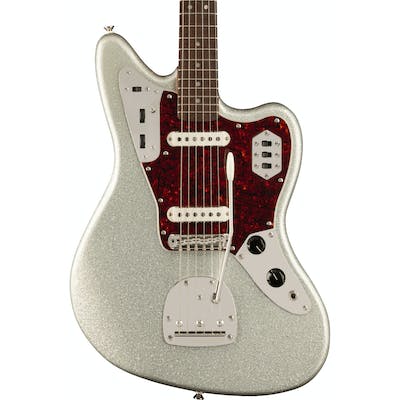 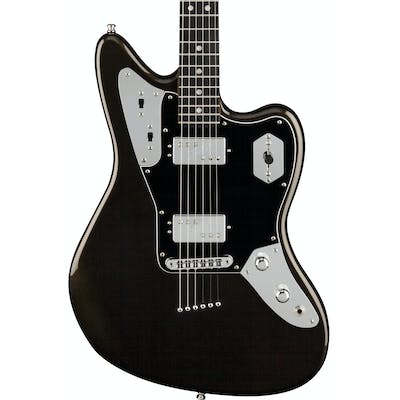 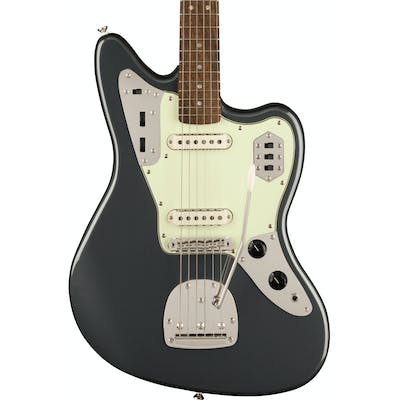 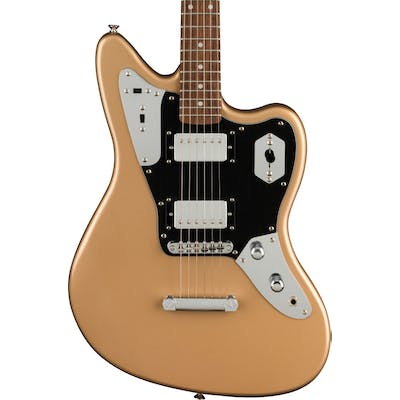 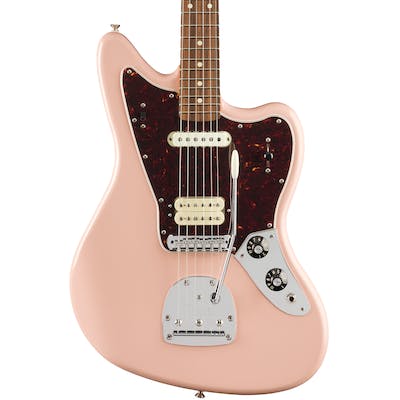 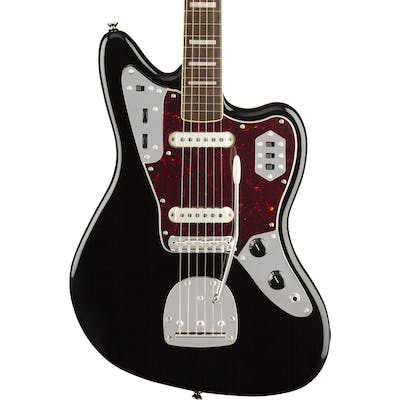 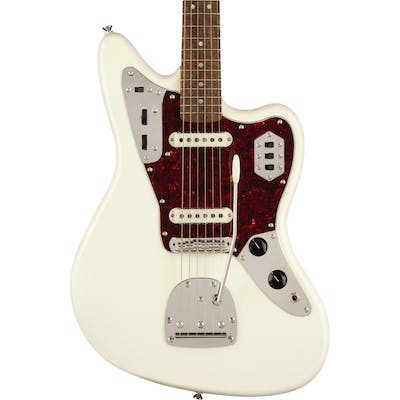 Both the Jaguar and Jazzmaster have many similarities, so when it comes to which one you’d choose, it can be quite tricky to decide. So let’s point out what sets them apart:

The Jazzmaster has the typical Fender scale length of 25.5”, the same as the Strat and Tele. This scale length will feel instantly familiar to anyone who has played a Fender guitar. There is fast attack and a certain snap you get from this scale length that is absent in shorter scale length guitars such as PRS and Gibson.

In contrast, the Jaguar’s 24” scale length is much shorter than most guitars, giving the strings a “slinkier” feel, making bends and vibrato much easier. Tonally you may hear a beefier, rounder sound compared to the snappy 25.5” scale. The shorter scale lends itself well to riff rock sounds, with that chunky sound. In 1962, Fender marketed the Jaguar as “faster and more comfortable” for its shorter scale length. It’s also a great option if something like a Strat or Tele feels a bit too big for your hands.

Typically, the Jazzmaster has 21 frets, while the Jaguar has 22 – which accentuated the feel of the shorter scale length as the distance between the frets is condensed to fit in one more fret.

The 21 fret Jazzmaster will feel just like a traditional Strat or Tele which also typically has 21 frets.

Perhaps the starkest difference between the Jaguar and Jazzmaster is the construction of the pickups. 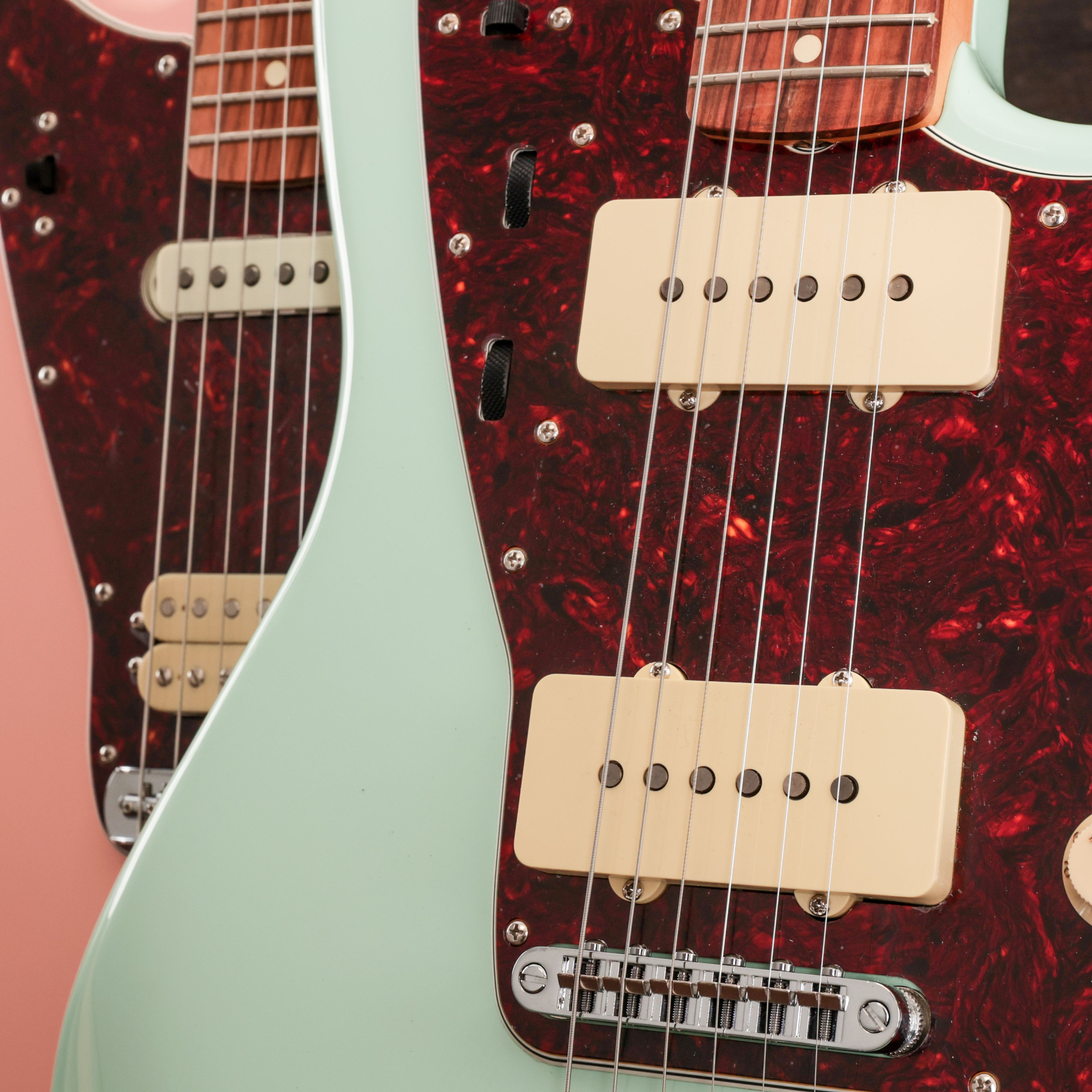 A common misconception is that Jazzmasters have P90 pickups. Although they look like P90s, traditional Jazzmaster pickups are unique. Whilst technically single-coils, they don’t sound like a Strat or Tele. When he designed them, Leo Fender was looking for a darker tone than the Strat and Tele – something that Jazzers would appreciate. Whilst retaining all the top end sparkle of a great strat pickup, the Jazzmaster pickup has shorter poles and a wider magnet wind. This gives a slightly mellower tone with a more present midrange and fuller bass. Their low output means that they are quite clean, perfect for shimmery chords, but with a fuller and rounder tone.

Jaguar pickups are more similar to that of a strat, with a brighter tone. But in response to the emergence of higher volume levels in the early ‘60s, Jag pickups utilise a metal shielding claw around the pickups to reduce 60-cycle hum (or 50-cycle hum in the UK and Europe). This additional metal component has a similar effect to the brass baseplate on a Tele bridge pickup which gives it a brasher top-end resulting in a more aggressive sound than a Strat or Jazzmaster. 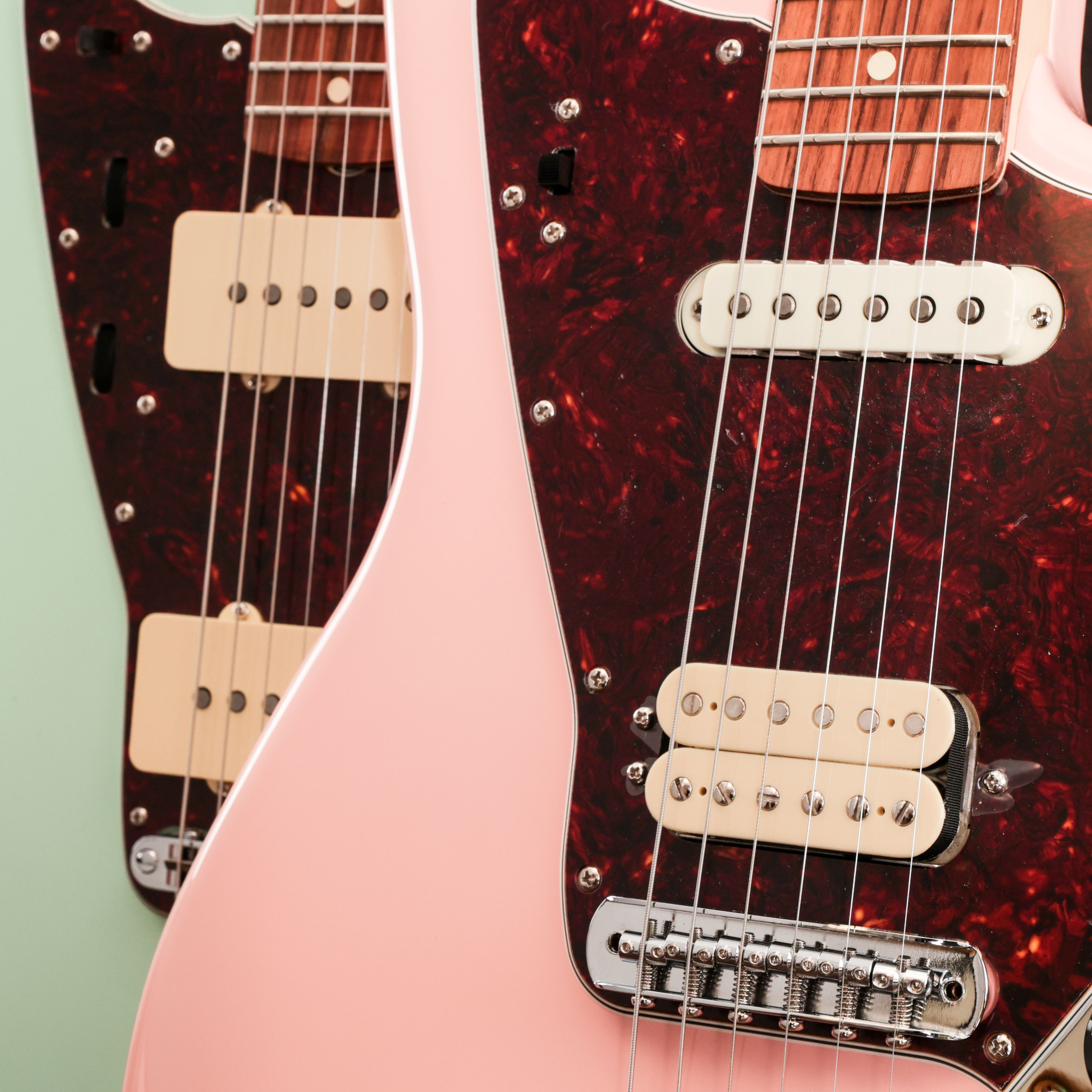 Jaguar pickups are also mounted directly to the body of the guitar, which adds a little bit of extra “oomph” and attack. This is great for playing with distortion for a really gnarly and cutting sound.

Both the Jaguar and Jazzmaster are available in other pickup configurations, if you’re looking for a particular sound. The Fender player series Jazzmaster is fitted with a pair of humbuckers and the Jaguar has a Humbucker in the bridge and single-coil in the neck. Humbuckers are great for classic rock and higher gain sounds. If you’re looking for those traditional Jag or Jazzmaster sounds, the Squier Classic Vibe and Fender Vintera series’ offer the original pickup configurations. 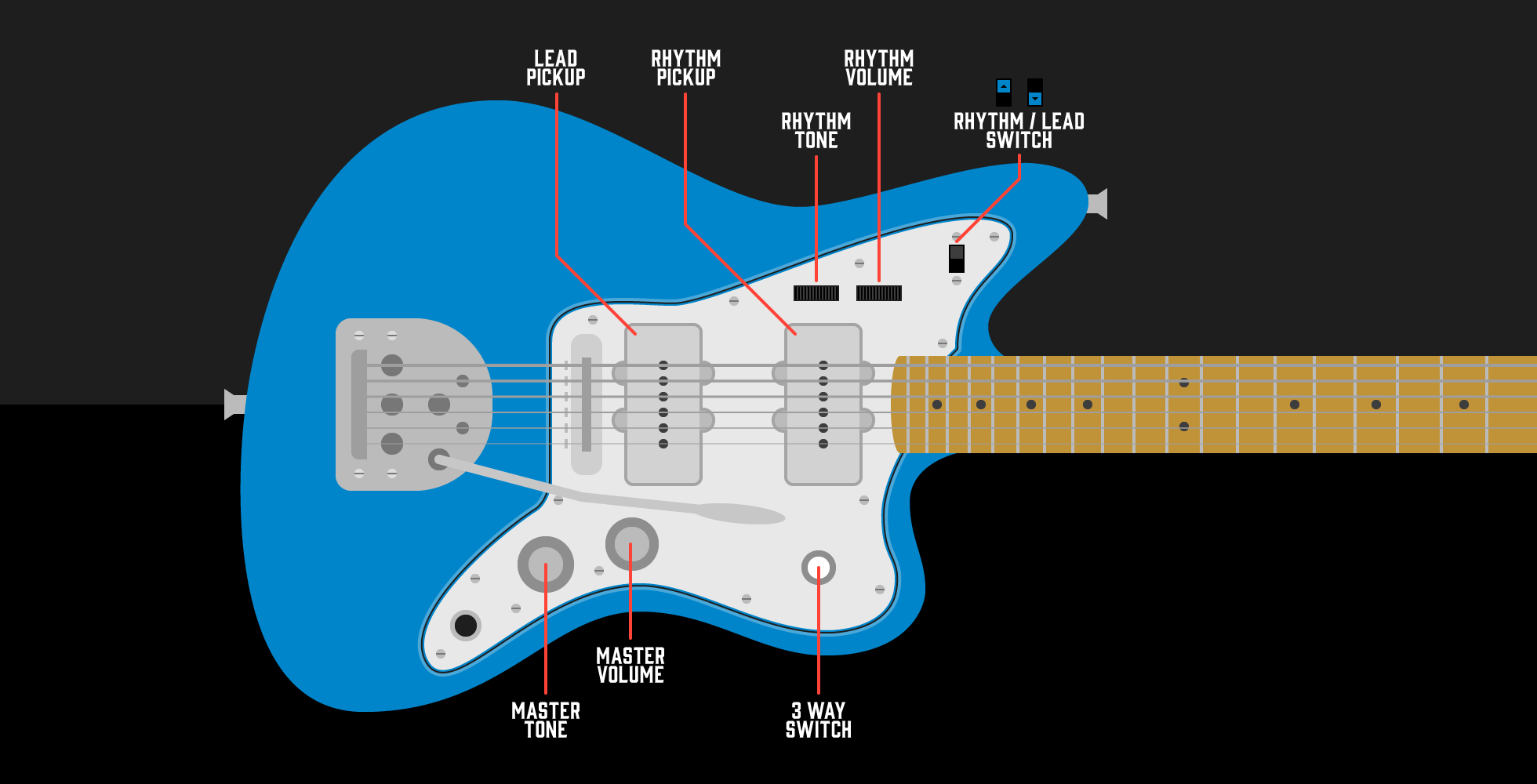 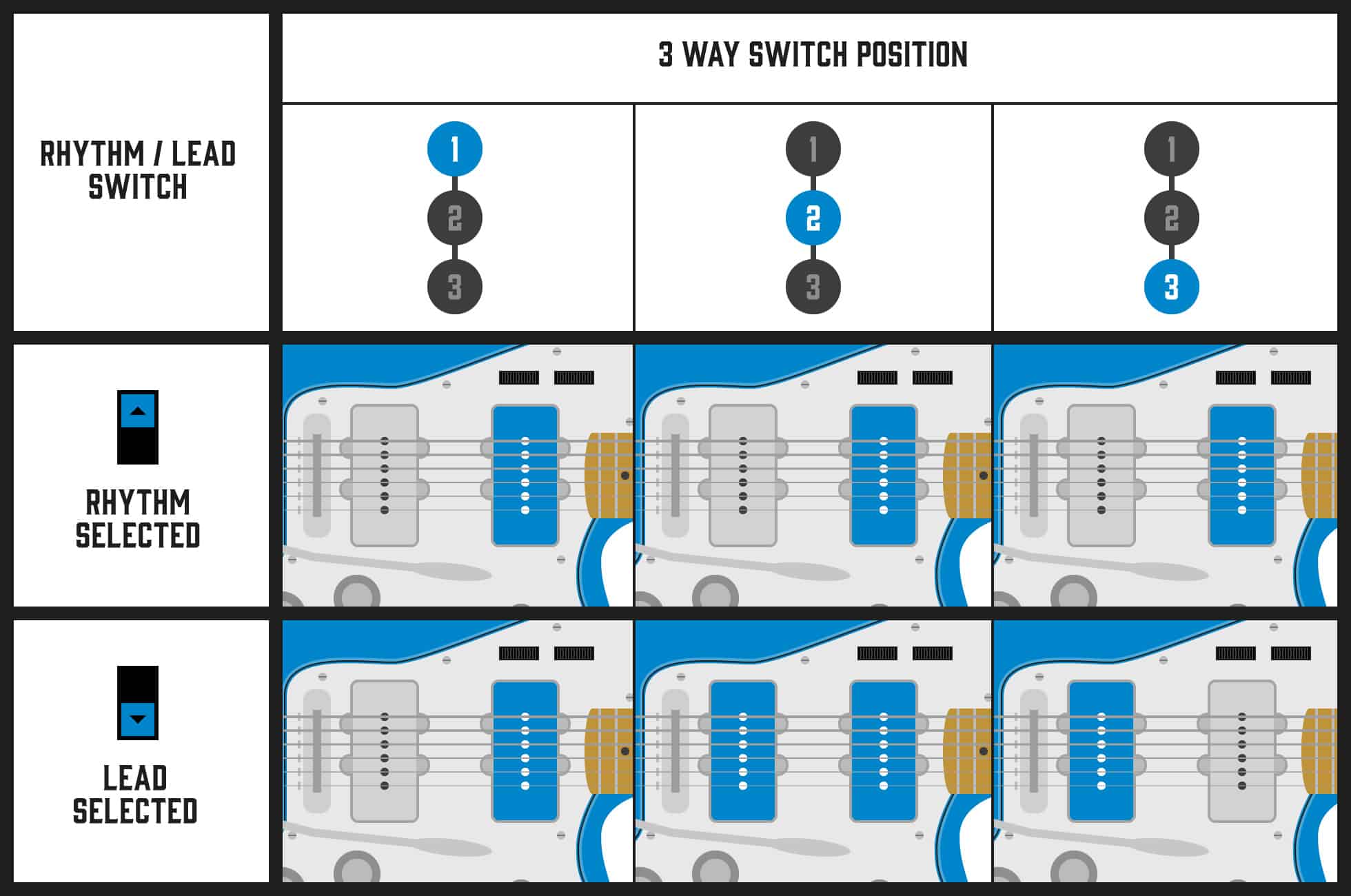 Many modern Jaguars and Jazzmaster opt not to use the additional switching circuits of the traditional guitars, but some still utilise the Lead/Rhythm circuits.

Although slightly different, the Jaguar and Jazzmaster function quite similarly. In the “Lead” mode the guitar functions as you’d expect, with tone volume and pickup selector.

The Jazzmaster utilised a conventional 3-way switch, while the Jag has 3 individual switches. The first 2 switches control the neck and bridge pickup respectively, while the 3rd switch, known as the “strangle switch” is a bass-cut control, to achieve paint-peeling levels of aggressive brightness!

The rhythm circuit functions the same on both guitars. The rhythm circuit has a much darker tone, and selects the neck pickup only, bypassing the regular switches and controls. Volume and tone are controlled by the 2 thumbwheels.

Which one should I choose? 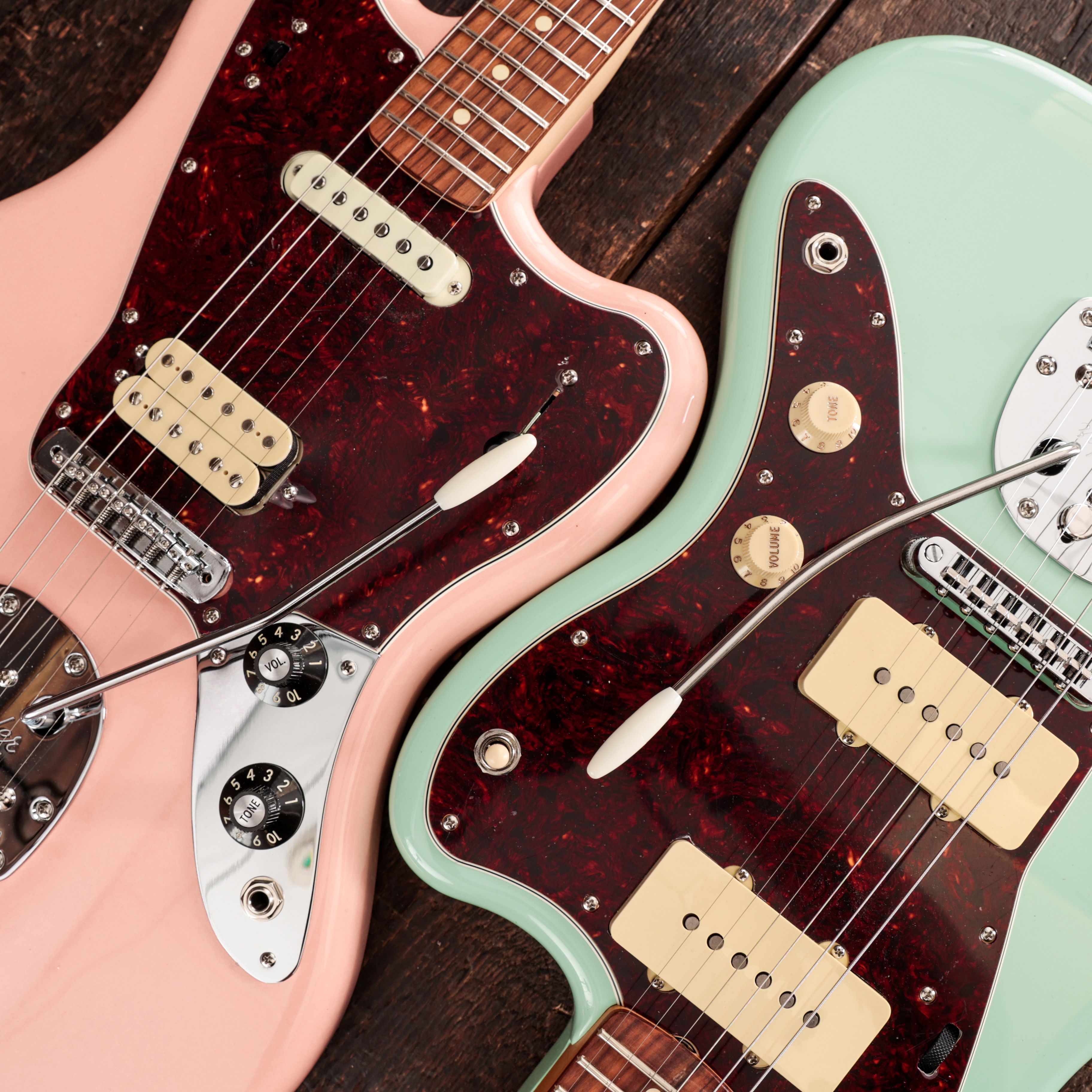 Now that we know the differences, it’s time to answer the real question – which one to pick. For a familiar feel and rich clean to slightly driven tones, the Jazzmaster is perfect. It has a unique sound but is balanced enough that you can find an entire palette of tones.

If you’re looking for something that feels and sounds just a bit different, the Jaguar might be the guitar for you. With its shorter scale length and hotter, brighter sound you can pile on the gain and get some unique and dynamic sounds that will stand out in any mix.

Why not also check out our Ultimate Guide to Offset Guitars