The legendary Gibson Les Paul and SG are two of the most recognisable electric guitars in the world. Played since the ’50s and ‘60s respectively, these two iconic solid body guitars share a lot of common ground but are actually very different instruments. In this blog, we put them up against each other to see which is the ultimate Gibson electric guitar! 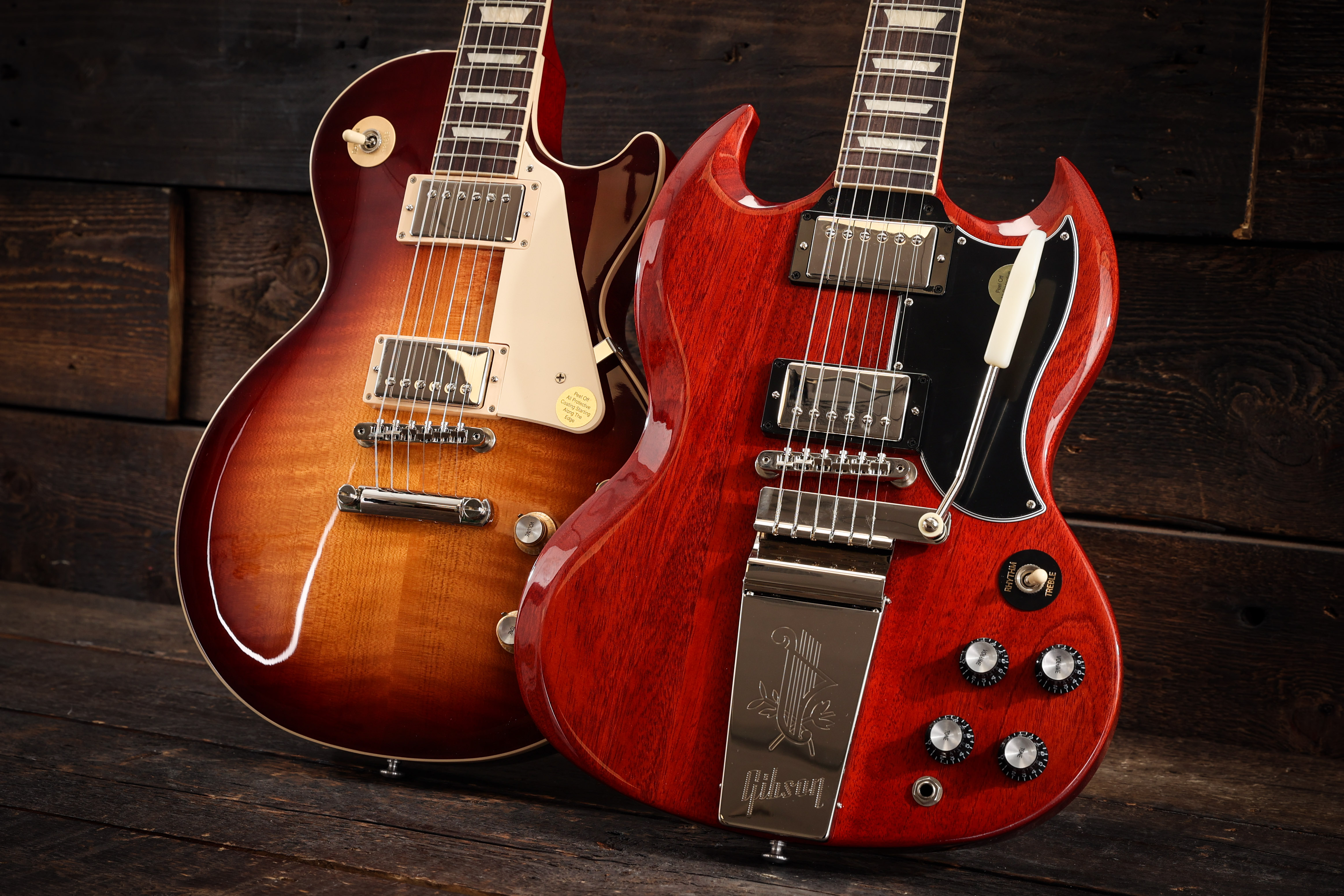 First released in 1952, the Gibson Les Paul was the result of a collaboration between Gibson and popular jazz musician Lester William Polsfuss, but you may know him better as Les Paul! Featuring a solid Mahogany body with a thick Maple cap, Mahogany neck, Rosewood fingerboard and two P-90 pickups, the Les Paul was Gibson’s attempt to rival Fender’s early solid body guitars. With over sixty years of history, its perhaps unsurprising that the Les Paul has had a few tweaks over the years.

Let’s take a closer look at what makes the Gibson Les Paul one of the most popular guitars in the world today, over six decades since its release.

The Les Paul’s elegant single-cut design is instantly recognisable as well as functional, allowing great access to the upper frets. The Mahogany body has been a feature of the Les Paul since its inception. Offering a rich, broad tone with sustain for days, Mahogany is resonant and has a pleasant harmonic content with a subtle yet attractive grain.

The majority of Les Paul guitars feature a carved Maple cap which sits atop the Mahogany body. Known for it’s bright, bell like quality, the Maple top perfectly complements the Mahogany body and looks great too, particularly when adorned in the legendary “Sunburst” finish!

The original Les Paul sported a pair of P-90 pickups but from 1957, Gibson introduced the PAF (Patent Applied For) Humbucker which was designed to eliminate feedback and background noise. These early PAFs are widely regarded as the holy grail of pickups and many of Gibson’s subsequent humbuckers are based on the original design.

To this day, Gibson still uses humbucker pickups across most of the Les Paul range, with the exception of the stripped back Junior and Special models which still feature P-90s. The humbucker’s rich sound and enhanced sustain makes it an extremely versatile pickup across many genres of music. By “bucking” the hum and background noise, humbuckers are the ideal pickup for players using a lot of gain as they’re much less likely to feed back. It’s no surprise then, that the Gibson Les Paul has been used for everything from Blues to Heavy Metal.

In the sixty plus years since the Les Paul was released, we have seen many different models come and go, boasting unique features whilst staying true to the original design. Let’s look at a few of the most popular Les Paul models available today.

As the name suggests, the Les Paul Studio is ideal for the studio musician who wants the best sound possible, without all the “bells and whistles”. First introduced in 1983, the Studio features a weight-relieved body for enhanced comfort, a slim taper neck and a set of high output 490 series humbuckers. Unlike the Standard, the Studio doesn’t feature a maple top, and the body and neck are unbound to keep costs down. The Les Paul Studio is an understated, tonal powerhouse with an elegant simplicity.

The iconic Les Paul Junior is loved the world over for its raw tones and simple design. Featuring a single P-90 pickup and a wrap-around bridge, the Junior is built for straight up Rock n Roll! Like the Les Paul Studio, the Junior has no body or fingerboard binding and features simple dot inlays as opposed to the classic trapezoids found on other models. For players wanting a simple, stripped down Les Paul, the Junior is the way to go! 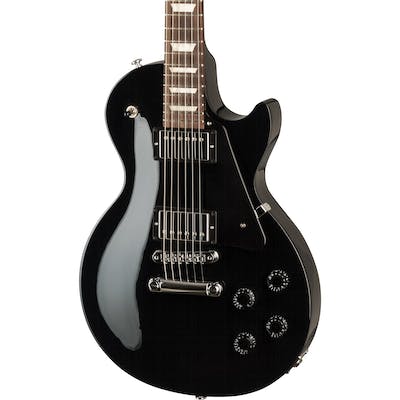 By the end of the 1950s, sales of the Les Paul had begun to wane and Gibson felt that a radical new design change would give it the shot in the arm it so badly needed. Ironically, Les Pauls from the late ‘50s are now some of the most sought after and valuable guitars on the planet, selling for hundreds of thousands of pounds!

In 1961, the world was introduced to the newly designed Les Paul, which featured a much thinner, double cut Mahogany body with no Maple cap. Two years later, the Les Paul name was removed from the guitar, and it was renamed the SG (solid guitar) and has remained so to this day. The original Les Paul design would not be seen again until 1968.

Let’s take a closer look at the Gibson SG and some of its unique features.

Like the Les Paul, the Gibson SG has a Mahogany body but one that is much thinner with two distinct cutaways, often referred to as “Devil Horns”! The SG features a Mahogany neck and Rosewood fingerboard but unlike the Les Paul, the fingerboard joins the body at the 22nd fret for unrivalled access to the upper frets. Gibson SGs typically feature a thinner neck profile than Les Pauls which many players feel is more comfortable and ergonomic.

A common complaint about the SG is that the neck “dives” when you let go of the guitar. This is as a result of the lighter body and it can be frustrating, but a good quality strap can go a long way to stopping it. The thinner, lighter body and improved access to the high frets arguably makes the SG a more “playable” guitar than the Les Paul but obviously it comes down to personal preference.

When Gibson redesigned the Les Paul, they had not intended to drastically alter the sound of the guitar. Subsequently, the SG range featured similar pickups to those found in the previous Les Paul models. Gibson quickly learned though, that part of what made a Les Paul sound like a Les Paul was its thicker body. This is why the Gibson SG sounds so different, despite sharing many of the same features as the Les Paul.

Whilst the majority of SGs utilise humbuckers, the SG Special and Junior models feature P-90 pickups for a more snarling tone, perfect for rock music. Tonally, the SG has a real brightness with enhanced highs and mids which will appeal to players who prefer a more pronounced sound than that of a Les Paul.

Like the Les Paul, there have been a number of SG models over the years, many of which are still in production today. Let’s look at a few of the most popular models.

The SG Standard is the quintessential SG, featuring all of the classic appointments including a bound Rosewood fingerboard, twin humbucker pickups and multi-ply black pickguard. Gibson also offer several SG Standard ’61 models inspired by the original 1961 models with different tailpiece options available. You can now choose from the classic stopbar, or for those of you looking for something a little different, a Maestro Vibrola or Sideways Vibrola tailpiece!

The Modern is a relatively new addition to the SG line and was designed with the modern player in mind. If you’re looking for an SG that’s armed to the teeth with versatile, player friendly features, the Modern is the one for you! Featuring Burstbucker Pro pickups with coil-taps, an AA Flamed Maple top, and an Ebony fingerboard with 24 frets, the SG Modern is packed with contemporary features and flair!

The SG Tribute is the most affordable and accessible SG model that Gibson offer, boasting legendary rock ‘n’ roll sound in a raw, stripped back form. Featuring a Maple neck, unbound Rosewood fingerboard and acrylic dot inlays, the SG Tribute is a high-octane, no-nonsense guitar built for performance that won’t leave a hole in your wallet! 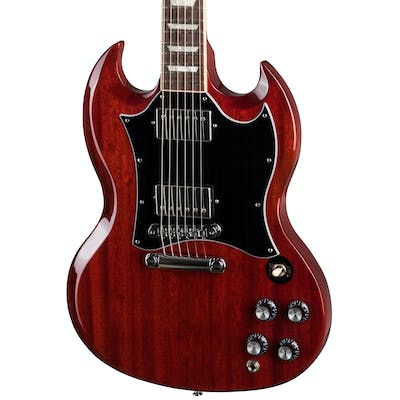 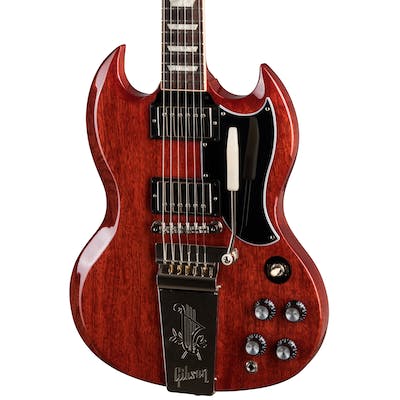 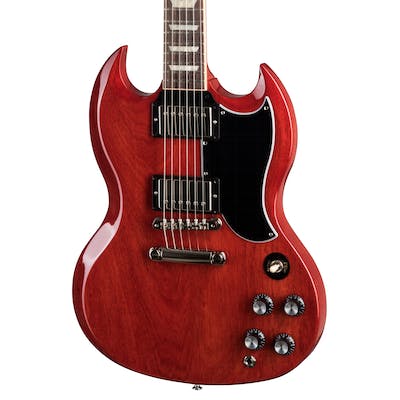 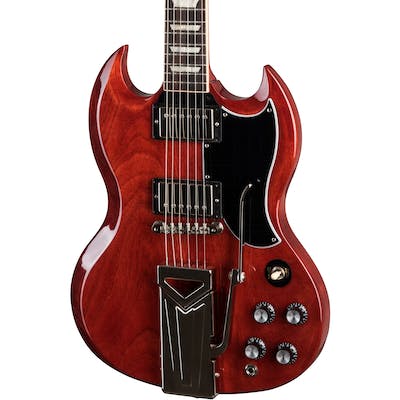 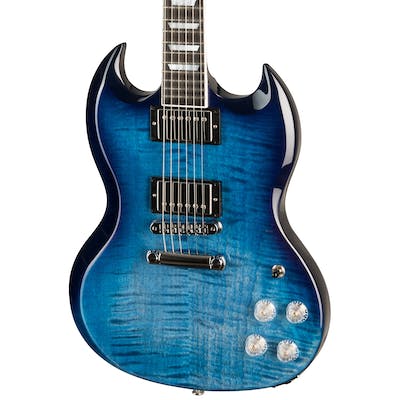 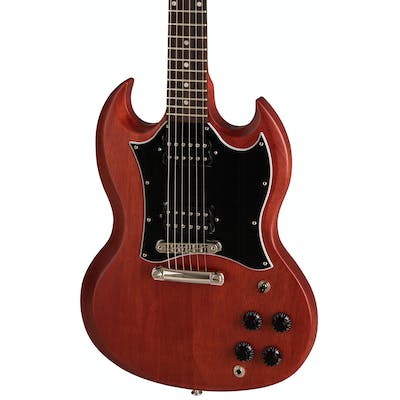 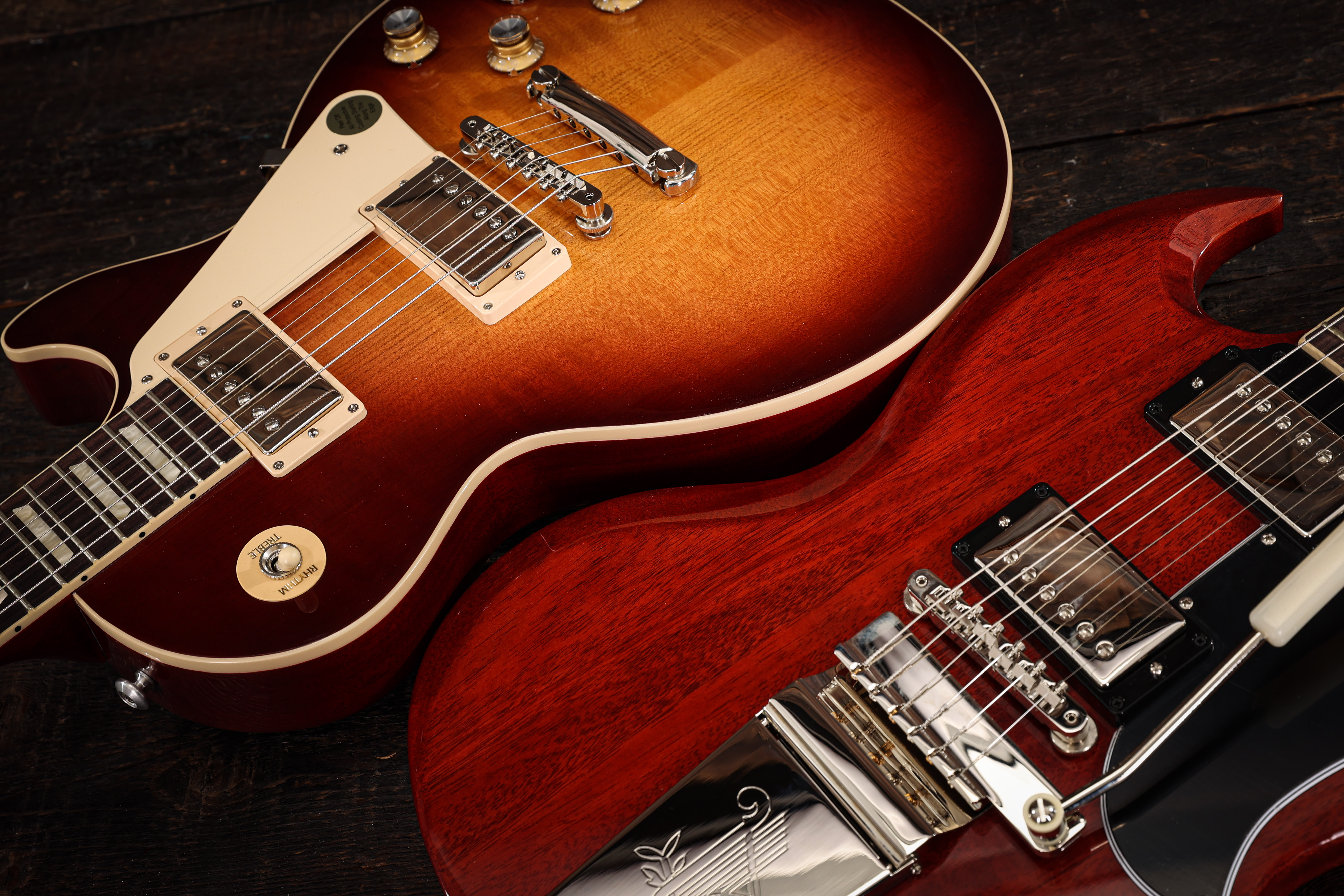 So there you have it, two legendary electric guitars with an equally impressive legacy. It’s very difficult to pick an outright winner because both guitars have a lot to offer, and everything is subjective of course. We encourage you to try out as many different Les Pauls and SGs as possible to find the right one for you and if you still can’t decide, there’s plenty of merit in having both in your collection!