The hollow body guitar and its semi-hollow successor are still as popular as ever, outliving countless fast musical fads over the last few decades. But makes both types of guitar unique? And what good is a hollow electric guitar, anyway? Here’s a very brief overview:

These two retro designs certainly have their place in amongst contemporary music and they’re not about to retire any time soon. Part of the attraction is down to the old school aesthetic, but they produce very specific sounds you’ll need in your arsenal, too. 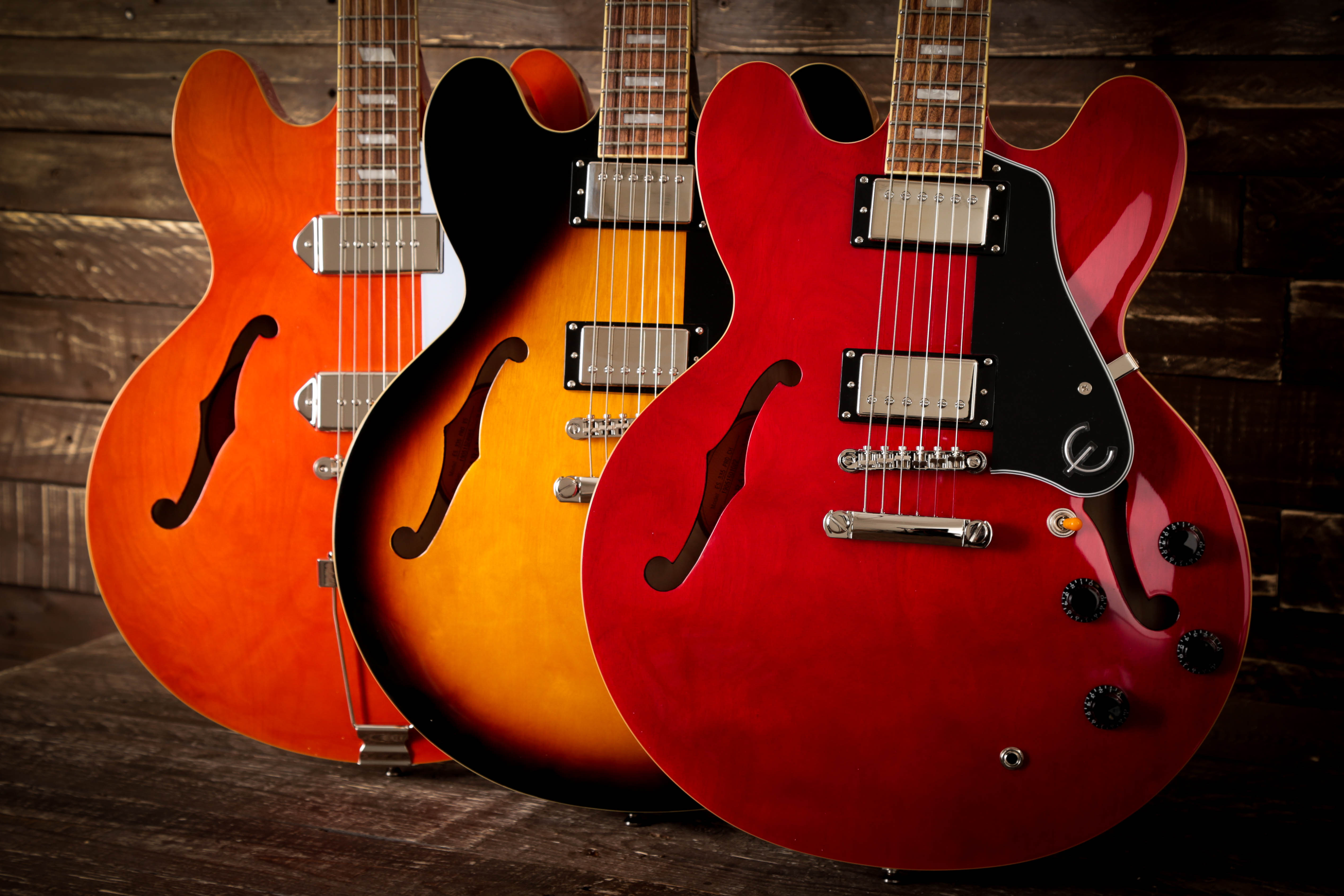 Hollow body electric guitars were first created in the 1930s in an attempt to compete for loudness in large jazz bands and orchestras. The archtop shape and iconic F-hole design are instantly recognisable features of a hollow body. You could say this style of guitar is very much “of its time”. It utilises a large open body, high string action and old school, low output pickups.

This is successful as a jazz instrument because of its clean, smooth tones. It also adds a little grit when played through a loud valve amp. A hollow body’s dynamics resemble those of an electro-acoustic in many ways, but they sound smooth like a regular electric guitar in contrast to an acoustic’s jangly characteristics.

The hollow body falls short, however, when you apply much higher volumes or gain. It is highly susceptible to feedback, although many guitarists have learned to use it in their favour. Legendary players such as George Benson and Chet Atkins favoured their warmth, which also works nicely when using slide techniques. Renowned alternative guitarists Geordie Walker of Killing Joke and Steve Howe from Yes use hollow body guitars to sustain notes and breath life into ambient sections. 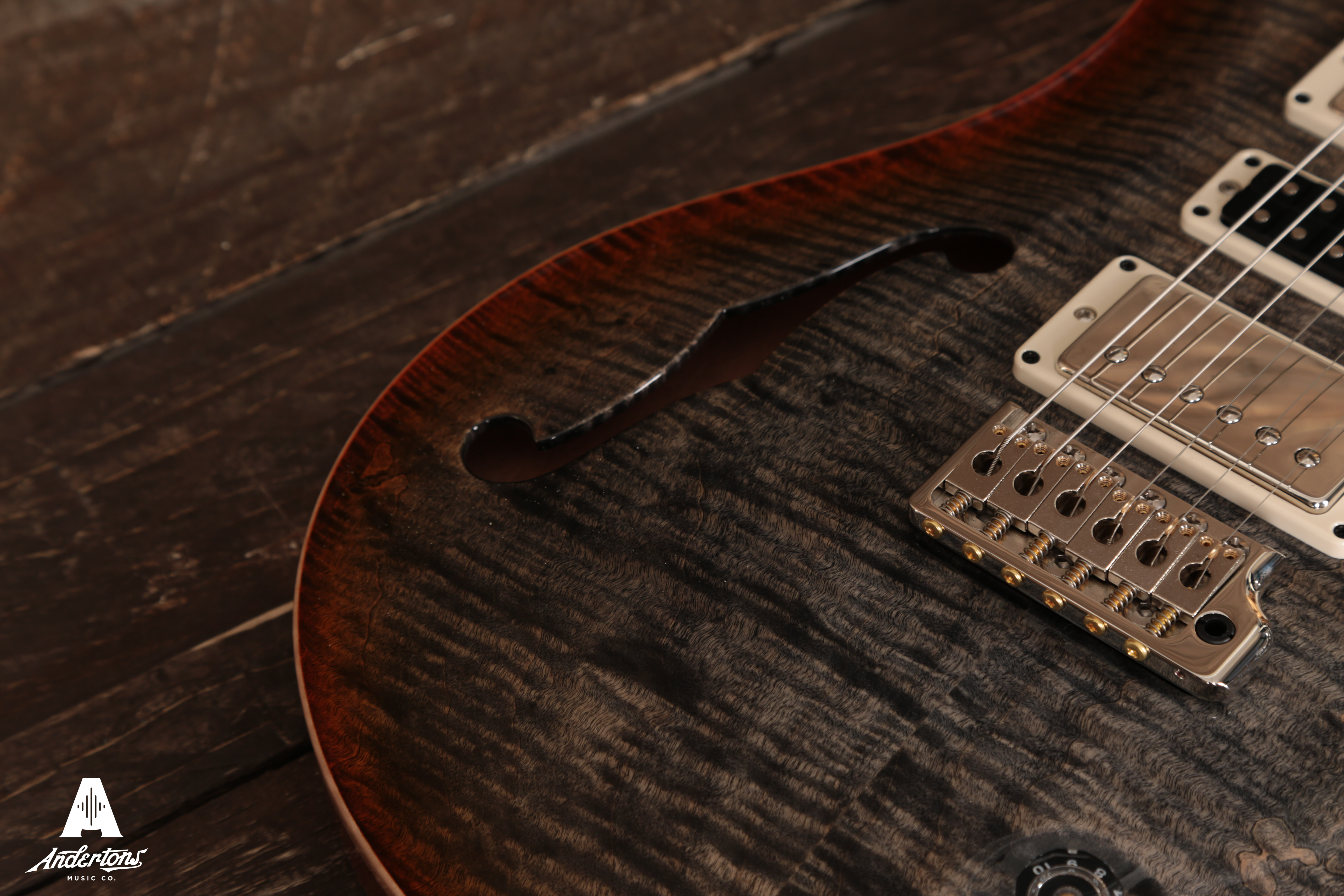 No doubt the more popular choice of the two nowadays, semi-hollow guitars have one defining feature that sets them apart from their older relative.

Semi-hollow electric guitars feature a wooden centre block to mount pickups. This eliminates the blustery feedback of a fully hollow guitar. Therefore, most semi-hollows are naturally geared towards music requiring overdrive or distortion and are equipped with hotter alnico pickups. BB King was one of the first players to bring it into the mainstream, and pretty much everyone since has been inspired by his fiery blues sound.

Commonly associated (yet not defining) aspects of a semi-hollow guitar also include the thinline body, single F-hole and fixed stopbar or Bigsby bridge. Essentially these are sleeker and more ergonomic. Perfect for all-action live guitarists or players after a balance between contemporary and classic design. One example of this would be Foo Fighters frontman Dave Grohl, who never strays far from his Pelham Blue Gibson for those huge stadium rock tones.

Gibson is by far and away the largest semi-hollow guitar manufacturer, with ranks of ES guitars in their current line-up and continually popular historical models. The ES-335 is synonymous with semi-hollows, as well as the smaller traditional ES-339. If you’re after a bit more edge, the ES-235 will serve you well as a stylish single-cut. However, Gibson are rolling back on their hollow-body instruments and leave that up to offshoot company Epiphone with the affordable Casino. 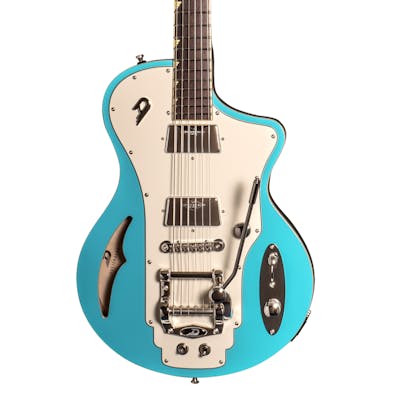