What Are Hybrid Guitar Strings?

There's plenty of diversity within the guitar accessories market, especially when it comes to strings. From the wealth of different brands out there to the various materials that they use to construct their products; the most important variable to consider, however, is a string set's gauges.

In this article, we'll explore an unconventional combination of string gauges; forming what are known as 'hybrid guitar strings'.

As guitarists, we know that playing comfort is incredibly important. The gauges of the strings that we use heavily influence how our instruments feel, and while some of us prefer the slinkier touch of thinner strings, there are others that adore the broader tones offered by thicker strings.

Those that are obsessive about finding the perfect setup are particularly sensitive to the gauges of their strings, and therefore finding the best set is subjective as it depends entirely on your particular style and playing demands. However, hybrid guitar strings are definitely on the rise as many musicians are transitioning to them.

Essentially, hybrid guitar strings give you the best of both worlds. They typically feature heavy bottom strings and light treble strings. But before we look into why they’re becoming a favoured choice, lets first identify the reasons why there are so many different guitar string gauges available. 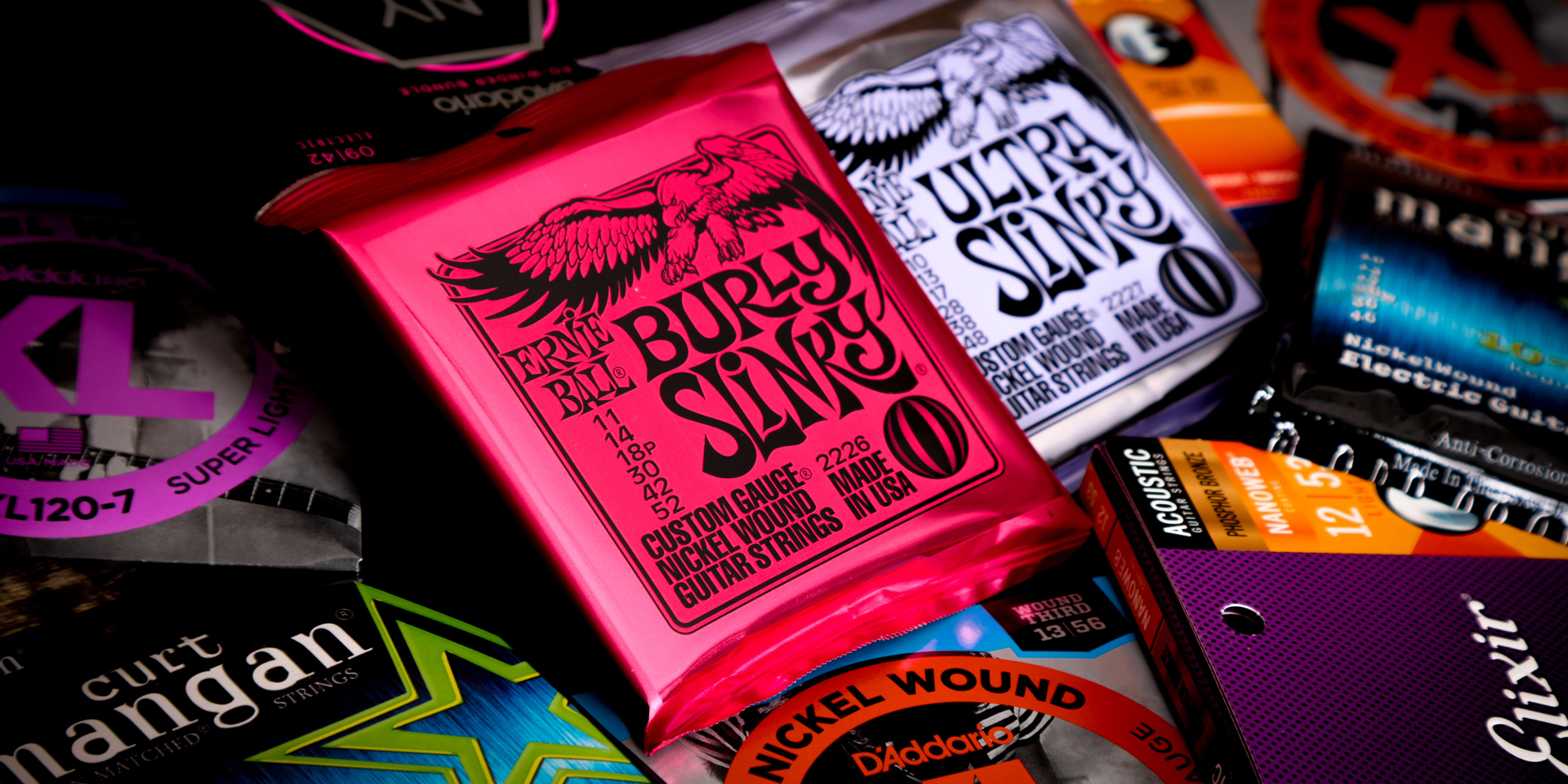 Admit it, us guitarists are pretty fickle when it comes to the kind of gear that we like. Although some musicians will find themselves sticking with the same equipment for years and years, the majority of us are constantly changing things in an effort to discover superior sounds and bring more finesse to our playing.

Something that a lot of guitarists will experiment with are string gauges, as they can dramatically affect the feel and sound of their instruments. And trust us, there’s plenty to choose from!

Country and blues players often prefer lighter strings, as their flexibility allows for easier control over string bending and vibrato. If you employ these techniques with thicker strings, you’ll feel a lot more strain and “fight” from them; causing fatigue and possibly injury.

As light gauge strings have a thinner construction, they typically sound brighter and more articulate too. This is another quality that country players adore about skinny strings. To most guitar players, 9-42 and 8-38 gauge strings are considered “light”.

If we look at the other end of the spectrum, thicker strings are often used by guitarists that dabble with lower tunings. This is because heavier strings are able to compensate for the loss of tension that occurs when you tune below standard pitch. Chunkier strings are therefore popular with metal players, as drop-tuning is common in heavier genres. However, jazz musicians also like thicker strings as they produce a warm and balanced tone.

Many believe that heavier strings stay in tune better than their lighter counterparts too. As thinner strings are more forgiving, some players can apply too much pressure on them with their fretting hands; making notes sound slightly sharp. Heavier strings, on the other hand, are difficult to knock out of tune as they can’t flex as easily.

They also vibrate within a narrower range, meaning that you can hit them harder with your picking hand without causing too much pitch oscillation. Whether a set of strings is “heavy” will depend on the player. But generally, the majority of guitarists would consider any gauges above 11-48 to be pretty substantial.

As you may have guessed, medium gauge guitar strings sit between these two extremes. These are generally the most versatile and popular with players as they’re thick enough to stay in tune well, yet thin enough to allow for precise control of pitch. Most guitar players rely on 10-46 gauge strings for standard tuning, and they’re considered the industry standard by most.

What Are Hybrid Guitar Strings?

Hybrid guitar strings combine the ideal attributes of heavy and light gauges. The three lowest strings are of a thicker gauge, while the treble strings are, relatively, much leaner. If you’re someone that loves the flexible nature of thinner strings for soloing but prefers to dig into fatter strings for aggressive-sounding riffs; hybrid gauges give you that freedom.

The advantages of hybrid strings aren’t limited to just the way that they feel, though. That’s because they also give you a slightly more varied tonal palette. For example, slinky strings generally produce brighter highs, while thicker strings deliver a fuller and more even tone. Your lead playing can therefore cut through better in a mix with lighter strings, while still offering a more controllable and forgiving feel.

However, there are some downsides to hybrid guitar strings. For instance, many consider them to work better with hardtail guitars rather than those fitted with tremolos. This is because the latter rely on springs in order to counteract the pressure from a guitar’s strings. Therefore, the uneven tension from hybrid strings can make them feel weirder to use. Of course, you can adjust the springs in the back of a guitar to compensate for the uneven tension, especially by using more springs on the treble side.

Some guitarists may also dislike the inconsistency of hybrid guitar strings, whereby the amount of pressure required to bend one string will differ with that of another. The three treble strings will be of a similar tension when tuned to pitch, but if you regularly bend or apply vibrato to your lower strings too, it may be harder to predict how much pressure you’d need to apply for it to sound natural and in tune.

Hybrid guitar strings are made by some of the biggest brands in the business, including Ernie Ball, D’Addario, Elixir and Curt Mangan. Catering for this growing audience is obviously important, and many brands are experimenting with the gauges that they offer to meet demand.

In 2019, Ernie Ball introduced a couple of new products to expand their hybrid lineup; Burly Slinky and Ultra Slinky. Designed for players that tune down, the former mixes the higher strings from a Power Slinky (11-48) set, with the lower strings from a Skinny Top Heavy Bottom (10-52) pack. 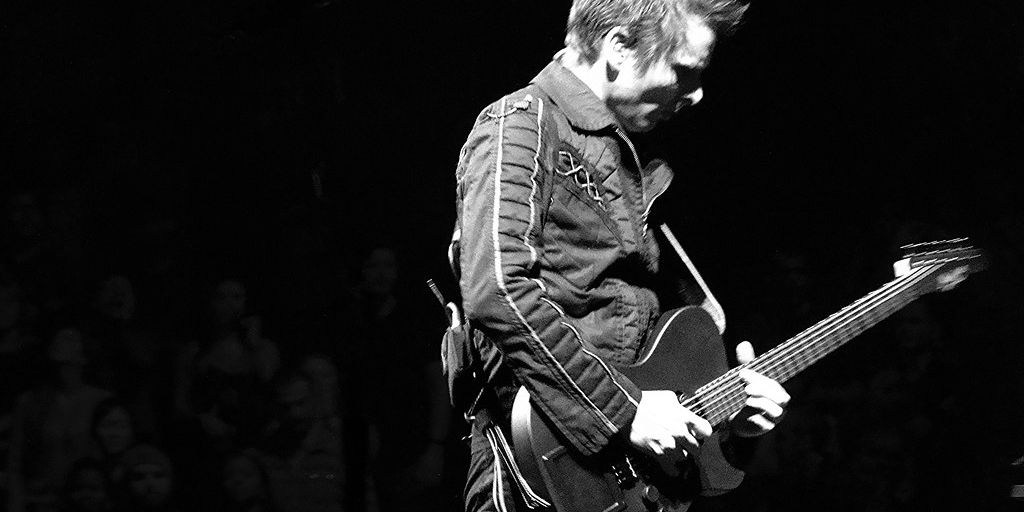 Lots of high-profile players use hybrid guitar strings these days, and they’re particular popular with guitarists that employ ‘drop D’ tuning. Matt Bellamy (Muse) is an extreme case, who uses medium 10-46 gauges combined with a low .60 for his 6th string. Now that’s heavy!

Synyster Gates and Zacky Vengeance (Avenged Sevenfold) also use hybrid strings, as well as Daron Malakian (System of a Down). These players mostly use drop D and drop C tunings respectively, and in the case of Avenged Sevenfold’s guitarists, they frequently flip between heavy riffing and shreddy solos. For them, hybrid electric guitar strings are therefore a no-brainer. 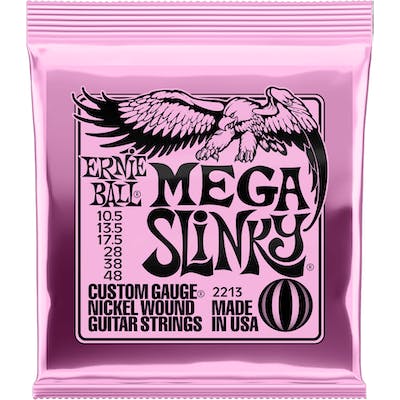 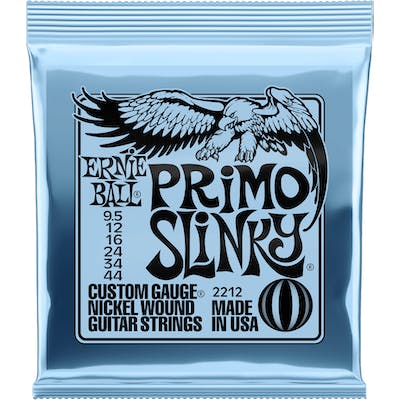 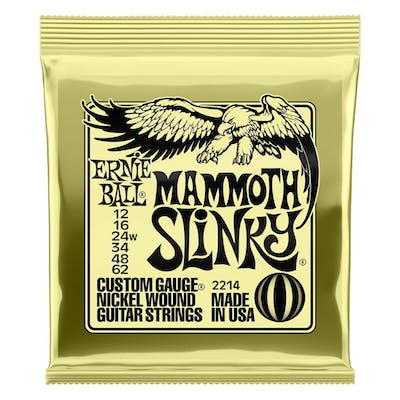 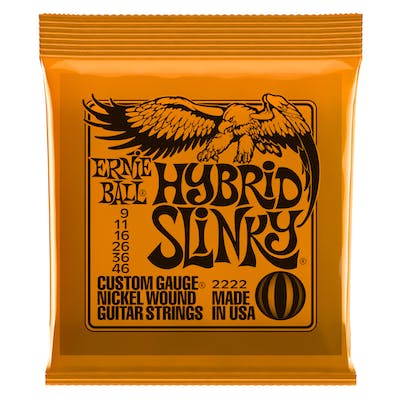 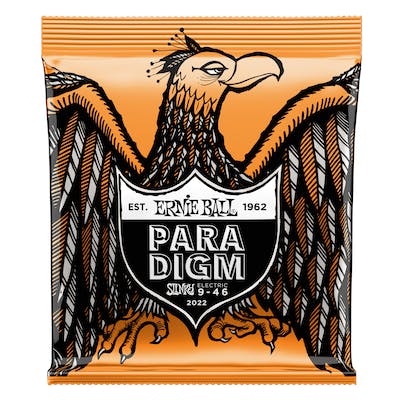 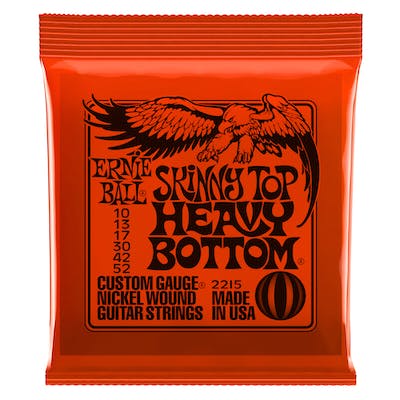 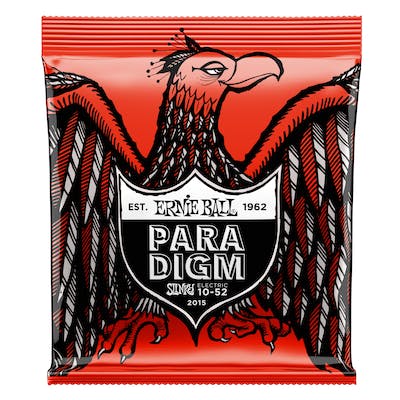 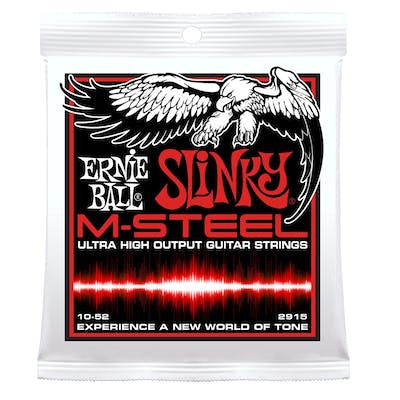 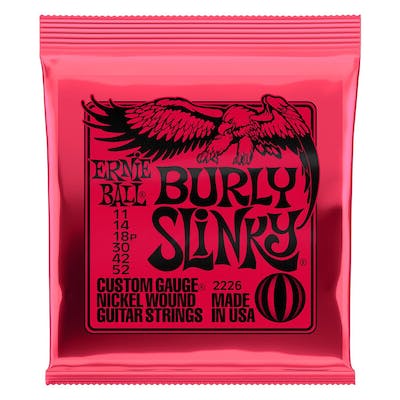 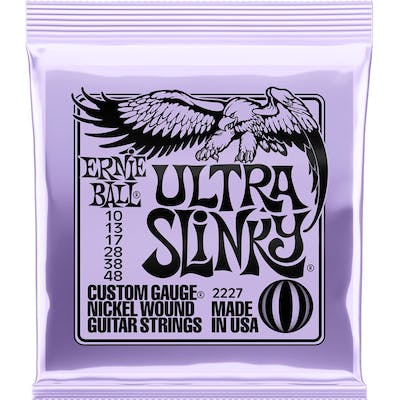 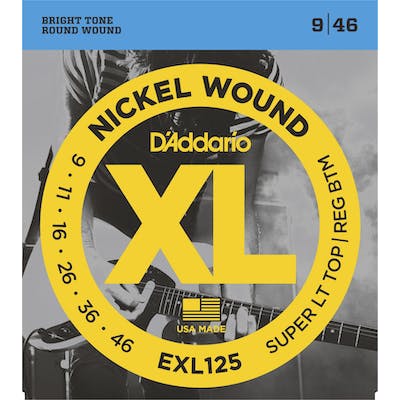 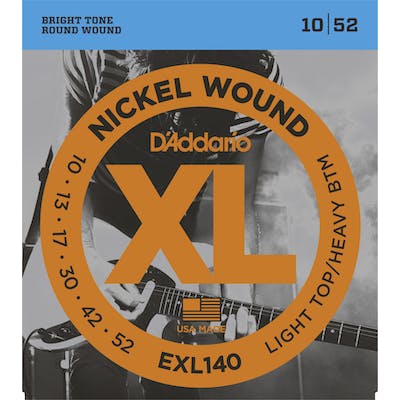 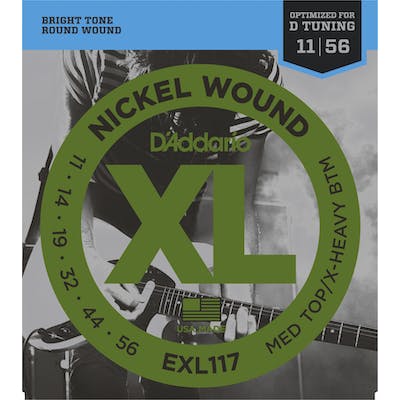 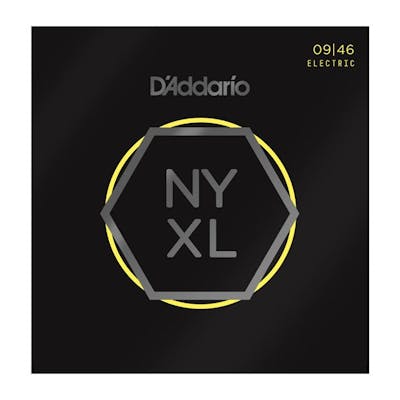 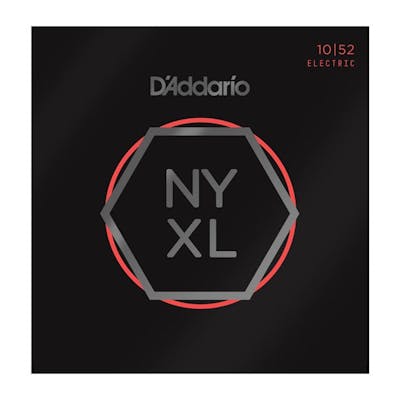 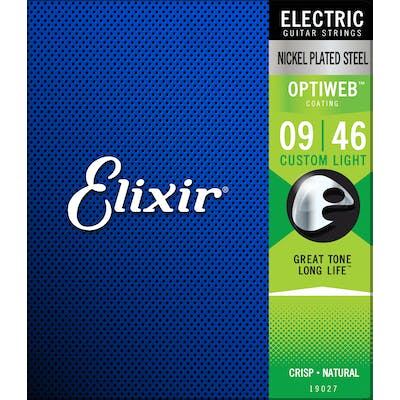 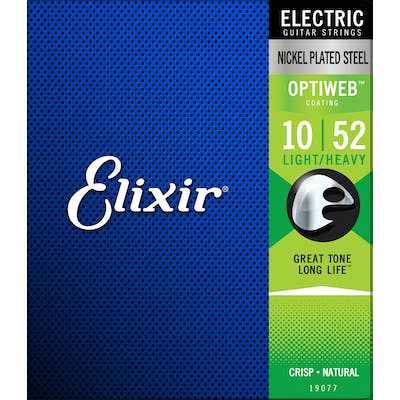 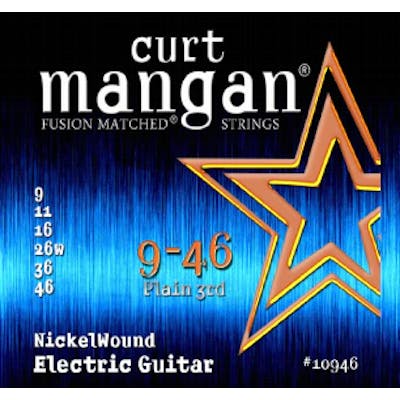 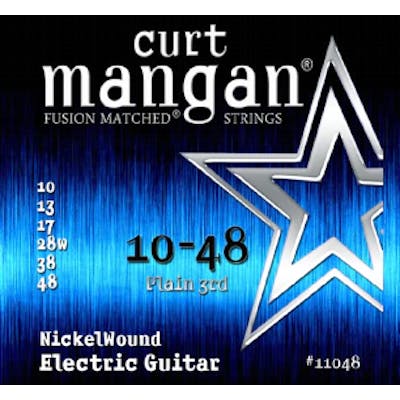 If you want to learn more about string gauges in detail, check out our dedicated guide. And if you want to find out more about gear to expand your knowledge, click here to view all of our Learn articles!