In one of our most popular episodes of Sound Like, Rabea & Matt attempted to recreate the heavy and progressive tones of modern metal pioneers Tool - for under £1500!

For those that want to know everything about guitarist Adam Jones' setup, in this article we go the extra mile and breakdown his entire rig as well as the history of Tool's sound; album-by-album.

Sound Like / Electric Guitars
View Elliot's Profile
Sound Like Tool | Without Busting The Bank Sound Like Tool - Without Busting The Bank Watch Rabea and Matt attempt to sound like your favourite artists on a budget using the most accurate but affordable gear they can find from Andertons Music Co. In this episode they attempt to sound like Adam Jones of Tool! Subscribe to Rabea here - http://youtube.com/rabeaafro Subscribe to Matt here - http://youtube.com/hornymrorange Here's the gear they chose: Epiphone Les Paul Prophecy Plus GX - https://goo.gl/FpzKuG Marshall DSL 40C - This item is now discontinued but follow this link to delve into Marshall Heaven - https://goo.gl/oYdb6w BOSS DD-3 - https://goo.gl/TFjdWy BOSS GE-7 - https://goo.gl/J2Ya68 #SoundLike #Tool #AndertonsTV https://i.ytimg.com/vi/DZbiL0NEr7c/default.jpg PT14M30S 2016-02-17T18:00:00Z
541333

The 1990s saw the emergence of several iconic bands, during a time when genres like heavy metal and alternative rock were more accepted by mainstream audiences. One of the most distinctive and idiosyncratic bands that rose to fame during this period was Tool.

Fusing drop-tuned riffs with melancholy vocals and complex rhythmic arrangements; Tool established themselves as one of the more artistic and experimental groups from this era. In the 21st Century they remain as influential as ever, with their long-awaited fifth studio album Fear Inoculum released in August 2019.

History Of The Tool “Sound”

Tool’s debut record Undertow (1993) features two of the band’s signature songs; “Sober” and “Prison Sex”. While the former demonstrates their willingness to use dissonance and contrasting dynamics to build tension, the latter is a great example of guitarist Adam Jones’ ability to write catchy, pulsating riffs; locking in perfectly with the powerful and energetic drum patterns of Danny Carey.

The band’s sophomore effort Ænima (1996) retained much of the raw edge heard in their debut, and is regarded by many fans as their finest work. Considered more progressive, Ænima has many alternative elements too, with Jones and bassist Justin Chancellor relying more on effects pedals to create variation. The tracks “Forty Six & 2” and “Pushit” put this transition on full display.

Lateralus (2001) and 10,000 Days (2006) saw the group take a slight step back from the hard-hitting style that they had formed. Compared to their earlier work, these albums are viewed as being more diverse with the band delving deeper into their spiritual side. With ambient sections in “Parabol/Parabola” and “Right In Two”, tracks like “Jambi” and “Rosetta Stoned” still deliver regular flashes of aggressive, distorted onslaught. The production on these albums is also a lot more polished and refined; representative of the industry’s change to digital recording mediums in the early 2000s. 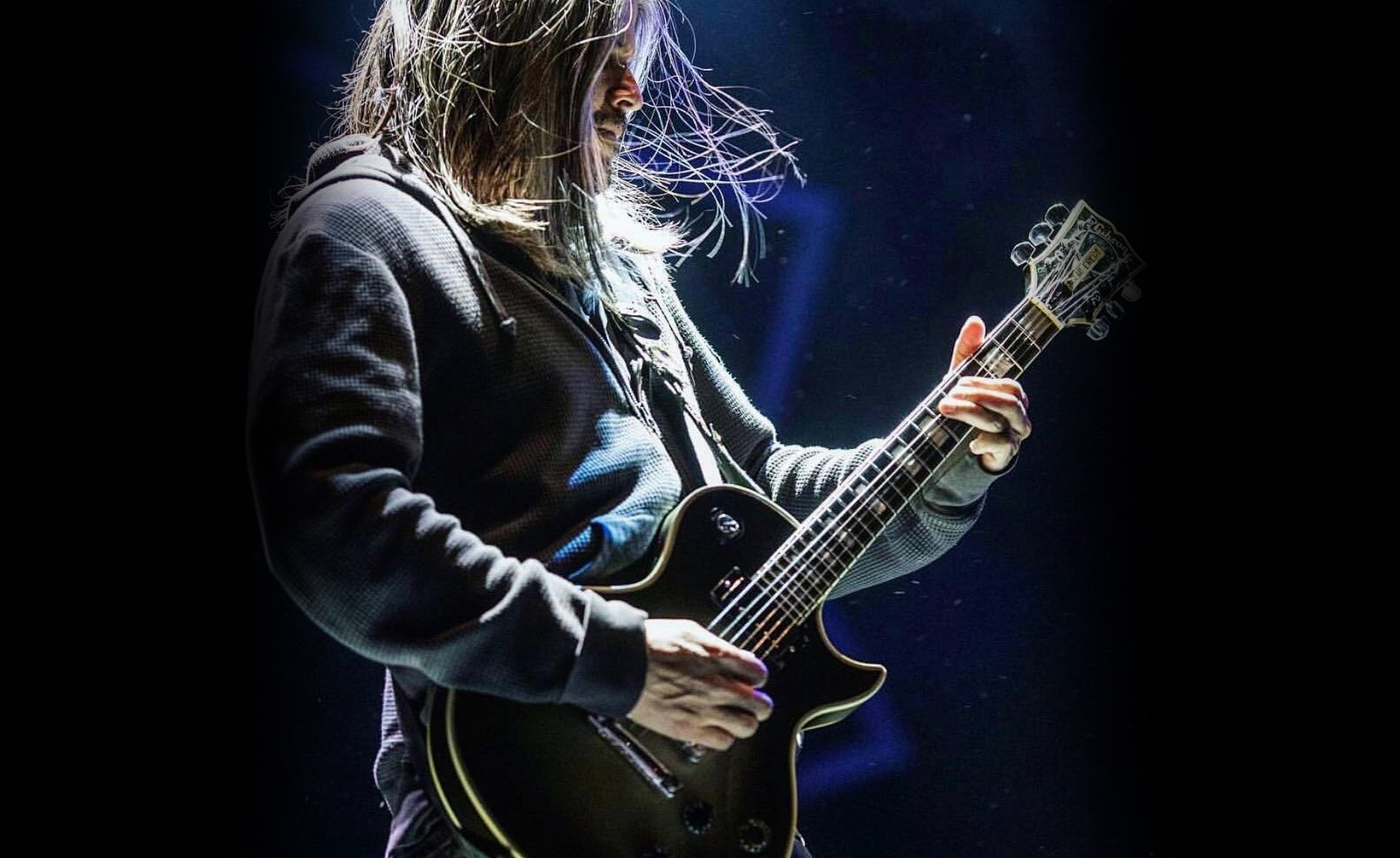 Adam Jones has been synonymous with Gibson Les Paul Custom guitars throughout his career with Tool – specifically Silverburst-finished models. Although Jones owns several Silverbursts, his number one guitar has always been his ’79 Les Paul Custom; made in Gibson’s ‘Norlin’ era. Les Paul models, and indeed most Gibson guitars that were made during this time, are notoriously heavy as they’re constructed from very dense Mahogany.

This is unusual by today’s standards, as the majority of modern Les Pauls undergo weight-relieving processes to improve their ergonomics. Old-school ’70s and ’80s models, though, were not weight-relieved at all. This can therefore be attributed to Jones’ distinctive sound, helping to form the powerful low-end and tight mid-range tones that he’s known for.

Jones uses his Silverburst Les Pauls for both live performances and studio work, and for the most part they have been left unmodified. However, their bridge pickups were swapped out for high-output Seymour Duncan JB humbuckers at some point. Punchy and clear with potent doses of gain, JB humbuckers are a trusted choice and undoubtedly a key ingredient of Jones’ sound.

For their Sound Like video, Matt and Rabea chose the Epiphone Prophecy Les Paul Custom Plus GX Outfit. A brand new Gibson Les Paul Custom would cost more than double the total £1500 budget, whereas the Epiphone is a similar instrument that remains well within their price range – at around the £600 mark.

The Epiphone Prophecy Les Paul isn’t available in Jones’ favoured Silverburst finish, but in terms of its build, it’s actually very similar to a stock Gibson Les Paul Custom. With an all-Mahogany construction, this guitar lets you attain those deep lows, while its Quilted Maple top brings out some top-end clarity to give riffs more focus and immediacy. The body and neck binding is a classy touch, as well as the sleek Ebony fingerboard and tasteful block inlays; as you’d expect with a traditional LP Custom. 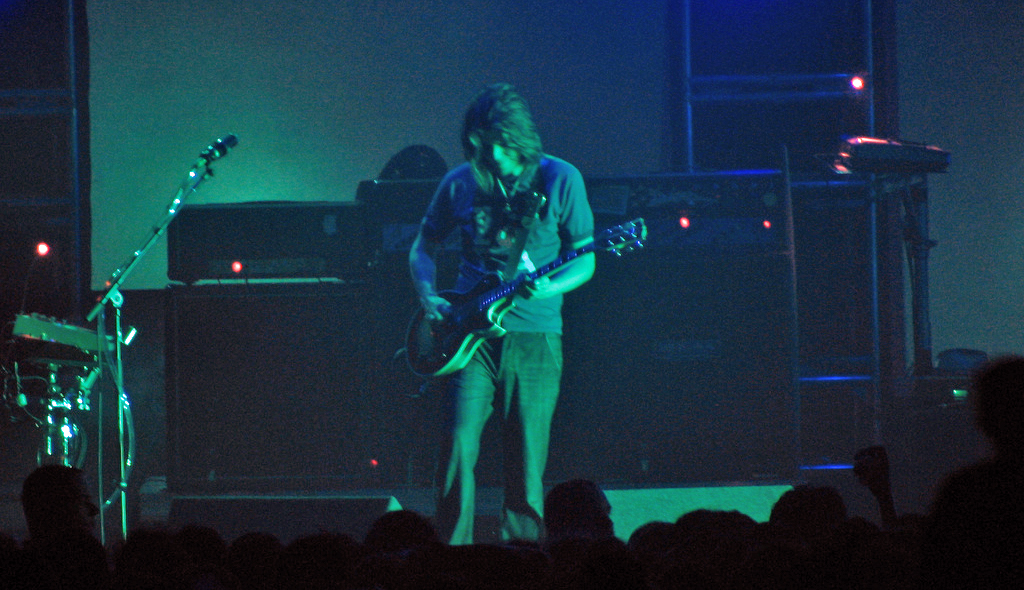 Adam Jones’ thick and textured guitar tone doesn’t just come from one amplifier; he uses three together. As the sole guitarist in Tool, it has always been essential for him to achieve a massive, stadium-filling guitar sound. And by running through three amplifiers, it allows Jones to cover almost every area of the guitar’s frequency spectrum.

His modified mid-’70s Marshall Super Bass 100 has been a mainstay since the very beginning, with its two channels wired together to create a more aggressive and saturated high-gain sound. This Marshall was used extensively for recording on Tool’s debut album Undertow.

It wasn’t until their second album that Jones started experimenting with a multi-amp rig, throwing a Mesa/Boogie Dual Rectifier into the mix as well as a Diezel VH4 amp head. Forming a more three-dimensional sound, Jones’ tone is noticeably heavier on Ænima. The VH4 could add a richer low-end growl, while the Dual Rectifier injected more gain and top-end fizz.

From the Lateralus era onward, Adam has used his Marshall Super Bass 100 in conjunction with a pair of VH4s (pictured), run through Mesa/Boogie cabinets. It has been documented that he employed Bogner Uberschall and Rivera Knucklehead amps when recording 10,000 Days, but his rig has remained much the same for nearly two decades. 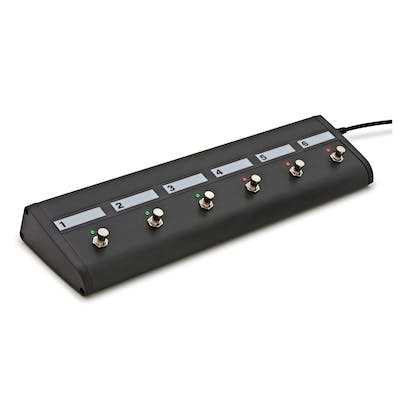 With a strict £1500 budget in mind, Rabea and Matt couldn’t buy two or three amps without breaking that threshold. Wisely, they chose the versatile, valve-driven Marshall DSL40C combo to emulate Jones’ Tool tones. Discontinued as of early 2018, the updated DSL40R is essentially the successor of this popular combo and has a few tweaks that make it superior to its predecessor.

Fitted with a punchy 12″ Celestion V-type speaker, the DSL40R can project plenty of volume. Its 40W of headroom gives you the best of both worlds too, allowing your sound to breathe at high levels while limited enough to keep your tones defined and tight.

For imitating Adam Jones’ distorted sound, using the lead channel’s ‘Ultra Gain’ mode will get you close. It emits lots of fiery gain and has that iconic saturated Marshall tone; certainly getting you within striking distance of the Undertow guitar sound. For lighter overdriven Tool tones, like that heard in the verses of “Schism”, the ‘Classic Gain’ mode would be more appropriate. The Marshall DSL40R’s clean channel is also decent, with a warm yet articulate character. Jones doesn’t often use clean tones, but for tracks such like “The Patient” and “Disposition” it will more than suffice.

Apart from its two versatile channels, the DSL40R amplifier is known for taking pedals well, both through its front-end and its effects loop section. Jones uses a number of stompboxes, so having a decent pedal platform is key; moving us nicely onto the next section.

Adam Jones isn’t considered a pedal junkie like his Tool bandmate Justin Chancellor. However, his live pedalboard does sport a fairly diverse arsenal of effects. Owning a mix of Boss, MXR and DOD pedals, Jones uses pedals in an additive way to enhance his core tones.

Jones employs an old-school DOD FX40B EQ pedal to shape the sound of his amps, boosting their lows for a chunkier character and raising the higher frequency bands for extra clarity. Jones’ MXR Micro Amp functions as a lead boost, which is often used in conjunction with his trusted Jim Dunlop Cry Baby wah; helping him to really cut through in the mix.

For delays, Jones has been a longtime user of the Boss DD-5 Digital Delay, a staple stompbox for many guitarists. He also relies on a Line 6 DL4 Delay Modeller, and it’s safe to assume that he used one of or both pedals to record the ambient guitar parts in “Vicarious”, “Right in Two” and “Lateralus”.

One of the most interesting elements in Jones’ setup is his Roland PK-5 MIDI Controller. Featuring a number of piano-like pedals, he uses this controller to trigger sounds and samples from his Access Virus synth module. Jones also uses an MXR Talk Box pedal, which he uses prominantly on the guitar solo in “Jambi”. 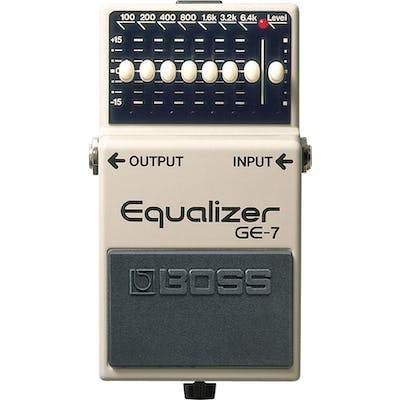 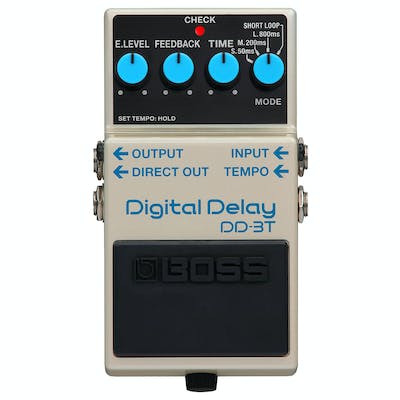 The DOD EQ pedal that Adam Jones uses is discontinued, so Rabea and Matt chose the Boss GE-7 Graphic Equaliser instead. Very similar in terms of how it works, they adjusted the frequency sliders with the “smiley face” EQ shape that Jones uses.

The Boss DD-5 that Jones has is also no longer in production. The Boss DD-3 used in the video is slightly simpler than the DD-5, with fewer delay modes to choose from. Regarding how it sounds and its parameters, it can be operated just like the DD-5 and is by far the closest alternative.

If you’re interested in finding out how to achieve the tones of your favourite artists, check out more of our Sound Like articles by clicking here!