Yes, the wait is finally over. After much hype, PRS Guitars has finally launched their budget-friendly version of the hugely popular John Mayer signature model — the SE Silver Sky! In this blog, we’ve compared its key features against those from the established USA Core model.

John Mayer fans have been asking PRS for a more affordable Silver Sky ever since the original broke cover in 2018. As part of their Core line of instruments built in Maryland, the US-crafted Silver Sky has always cost north of £2,000 and, while undoubtedly a great guitar, its hefty price-tag has made it unobtainable for many players. Now, PRS’ new SE Silver Sky gives those guitarists an opportunity to play an instrument that’s almost indistinguishable from Mayer’s Core model — especially at first glance! 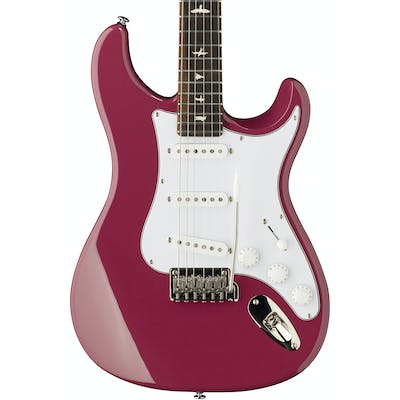 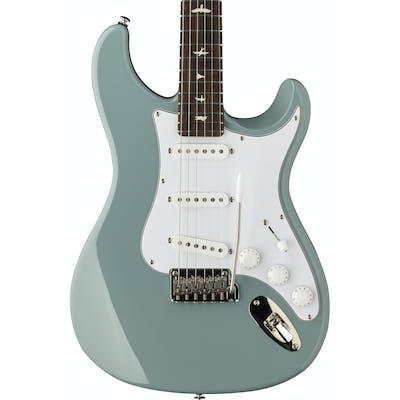 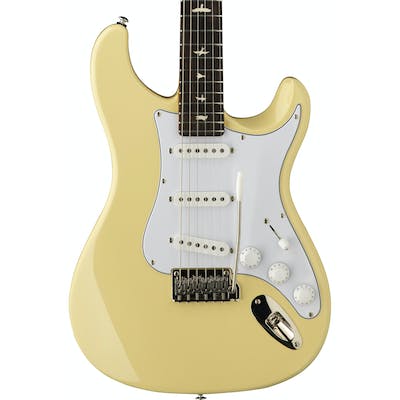 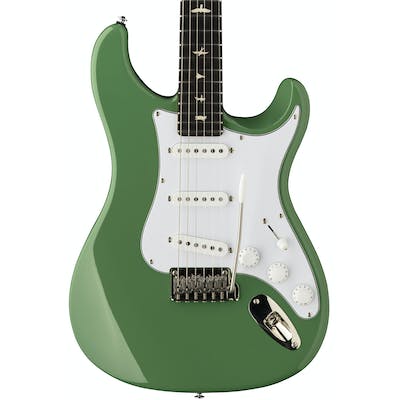 The Far Eastern-made SE Series Silver Sky boasts the same elegant double-cutaway body, inverted PRS headstock and trio of single-coil pickups that make the Core Silver Sky so recognisable — and controversial, we might add! So, is the only difference between them where they’re made? Not quite. As we’re about to uncover, there are a few small yet noteworthy spec changes which we believe are worth knowing before taking the plunge on one of the new SEs.

Before we look at the main differences between PRS’ Core and SE Silver Sky guitars, let’s quickly go over their key similarities:

While the Silver Sky guitars from both the Core and SE series’ share many key elements, this next section uncovers some of their differences. These are definitely worth knowing before you choose which one to buy, especially if you’re fastidious about the details! 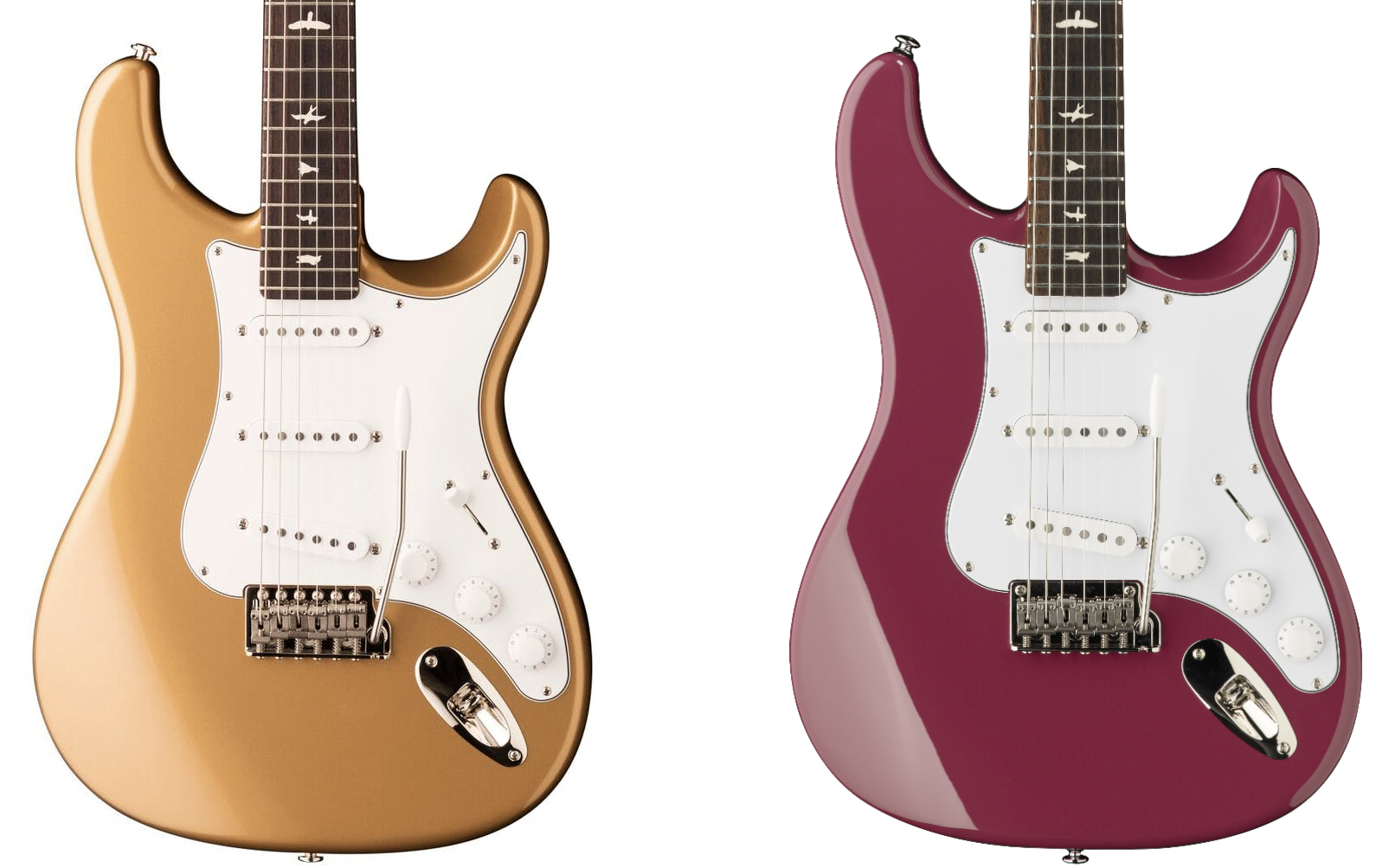 John Mayer’s PRS Silver Sky was intentionally designed to blend the vintage warmth and familiarity of one of his favourite mid-’60s electric guitars with the finesse of a brand new instrument. That’s why the Core model boasts a traditional Alder body — a widely-used guitar tonewood since the ‘50s that’s renowned for its balanced sound and medium weight.

The PRS SE Silver Sky’s body, however, is constructed from Poplar. This is a cheaper timber that’s synonymous with affordable instruments, although some companies still choose to use it to craft some of their high-end guitars — namely Gibson with their ES instrument line. Poplar is often likened to Alder, also yielding a fairly neutral tone but with a lighter feel. So sonically, there isn’t much of an audible difference between them. And even though some players may be put off by the idea of a Poplar body — we don’t think it’s a huge deal!

Long before the SE Silver Sky was announced on PRS’ social media platforms in early January, there were endless discussions on online guitar forums about what specs an SE version of Mayer’s signature guitar would have if it ever came to fruition. Many anticipated modernised features so that the instrument could appeal to a wider audience, and now that the SE Silver Sky has become a reality — it turns out that they were correct. Well, to an extent!

One such detail is the fingerboard on the SE Silver Sky, which boasts an 8.5” radius instead of the more rounded, vintage-inspired 7.25” radius used for the Core model. While only a small tweak, an 8.5” radius will feel slightly flatter and closer to the 9.5” radius widely used by other big guitar brands. In our video, Pete voiced that there is a discernible difference in how they feel but it could be down to the rolled edges on the fingerboard of the Core model rather than its radius specifically, as well as the very slight difference in fret-wire dimensions.

Although subtle and not mentioned in the official PRS specifications, the SE Silver Sky’s neck apparently has a satin-style sealant which Lee described as a “very natural wood finish” in our video. He then explained that the Core version’s neck felt more like a “vintage, lacquered Strat neck that’s been played a lot”. The slippery satin finish is definitely another feature that younger, modern-minded players are likely to prefer — making the SE model perhaps more “accommodating”, as Pete aptly put in our video.

If you’re unaware of the story behind PRS’ 635JM single-coils, they were apparently designed to sound “somewhere between the pickups typically found in a ‘63 and ‘64 Strat” according to Lee. The trio of single-coils in the SE Silver Sky are based on these pickups fitted in the US-made model, and voiced to capture their essence.

Taking the feedback from our video, Pete stated that “tone-wise they’re very close” but the pickups in the USA Silver Sky sounded “slightly clearer”. Lee added that the Core Silver Sky sounded “rounder and slightly fuller” to his ears, but could be “psychosomatic”. Turned out he was right, as Lee guessed the wrong guitar in the blindfold test segment of the video! They are certainly very alike tonally, which is impressive for the SE when you consider that the Core Silver Sky costs more than twice its price.

Like we’ve mentioned, the Silver Sky is based on one of John’s favourite vintage ‘60s guitars, of which features a 6-screw tremolo. In an official PRS video, one of their guitar techs (James Zimmers) explained that “both John Mayer and Paul Smith found that they liked the tone and sustain” of this type of bridge during the design and testing stage of the Silver Sky, especially when mounted flush to the body.

The 2-point tremolo on the SE Silver Sky, another feature that gives it a subtly more contemporary “vibe”, is therefore one of the most noteworthy changes. But while it may turn off some purists, Pete said that both vibratos felt “the same” when he played one after the other. Each guitar also comes with 4 tremolo springs installed as standard, which may explain why the tension and feel of each tremolo was so similar.

Bone is a common material used for guitar nuts, especially on vintage and premium instruments. The Core PRS Silver Sky comes equipped with one, and it’s liked by many for its balanced density and durability; known to boost sustain and minimise friction so that the guitar’s strings can return to pitch after bending or tremolo use.

The PRS SE Silver Sky boasts a synthetic bone nut instead. As its name suggests, this is designed to imitate the feel and sound of bone but is obviously made from plastic to be more cost-effective and easy to source. It’s probably not as good as the real thing and is noticeable bigger, but from the video with Lee and Pete, the SE Silver Sky seemed to stay in tune very well — even after using the tremolo a few times.

Both PRS Silver Sky guitars feature vintage-style tuners; very much akin to Klusons. And while similar aesthetically, especially with their matte grey tuning buttons, the machine heads on the Core Silver Sky are actually locking whereas the SE tuners are more conventional.

Locking tuners aren’t for everyone, but they make string changes a lot easier and it can be argued that they improve tuning stability as less winds are required around their posts. If you want to save money and get the SE model, upgrading its machine heads to locking tuners wouldn’t be a bad idea.

Back Plates (for Tremolo)

One of the PRS Silver Sky’s quirkiest features, which raised a few eyebrows at the time of its release, was it’s lack of a tremolo plate. This was a deliberate choice of course, to allow John and his tech to make tension adjustments to the tremolo springs without needing to remove the plate everytime his guitar needed a new setup or set of strings between shows.

PRS has decided against carrying this feature over to their more affordable SE Silver Sky. This is probably because the factory where they’re made cannot finish the tremolo cavity as cleanly as the US luthiers/painters can — as the SE models will be mass-produced and made in a shorter amount of time. It’s only a minor thing, and there are probably a lot of players who’d prefer to have the tremolo cavity covered up anyway.

Let’s be honest, the SE Silver Sky was a no-brainer for PRS. With the overwhelming success that their collaboration with John Mayer has brought them over the last few years, a more accessible Silver Sky was never a question of ‘if’, but ‘when’.

There’s no doubt that this affordable iteration of the Silver Sky, apparently two years in-the-making, will become one of the best-selling guitars of 2022. And trust us — we’re very excited to see where PRS will go with it in future. More colour options? A version with a Maple fingerboard? An H/S/H pickup configuration inspired by John’s extremely-limited Super Eagle model? Who knows!

The SE Silver Sky | John Mayer Model | PRS Guitars PRS Guitars and John Mayer are proud to unveil this highly anticipated addition to the SE lineup. The PRS SE Silver Sky is a familiar iteration of the original Silver Sky model that was first introduced with John Mayer in 2018. This workhorse guitar provides ample tone and playability in four distinct colors, delivering looks, feel, and sound. For more information on the PRS SE Silver Sky, or to find a dealer near you, head to: https://prsguitars.com/electrics/model/se_silver_sky_2022 You can follow John Mayer and listen to his music in the below links: Website - https://johnmayer.com Facebook - https://www.facebook.com/johnmayer/ Instagram - https://www.instagram.com/johnmayer/ Twitter - https://twitter.com/johnmayer YouTube - https://www.youtube.com/johnmayer TikTok - https://www.tiktok.com/@johnmayer Spotify - https://open.spotify.com/artist/0hEurMDQu99nJRq8pTxO14 Apple Music - https://music.apple.com/us/artist/john-mayer/472054 #toneforall https://i.ytimg.com/vi/x4untaljllM/default.jpg PT10M29S 2022-01-11T16:47:10Z
466818

We hope that this blog has made it easy to discern the differences between PRS’ USA and SE Silver Sky guitars. If you’re interested in finding out more about music gear and expanding your knowledge, click here to view all of our Labs articles! For more information on PRS guitars, check out our related articles: 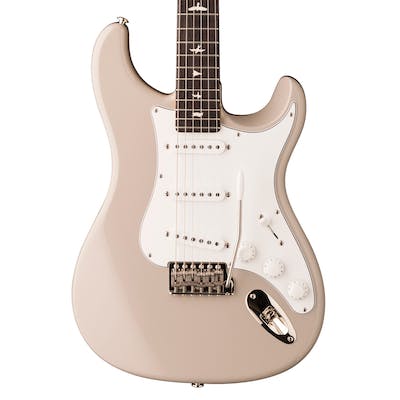