Why Everyone Needs a Fretless Bass

Our customer service team has responded to the following question many times: “what is the difference between a fretless and fretted bass?” But truth be told, the answer lies in their names - a fretless bass simply doesn’t feature any frets whereas a fretted bass does.

Offering a unique sound and requiring an altered playing style, we’re going to explain why a fretless bass can be a great addition to your instrument arsenal.

Some musicians believe that a bass cannot be played as expressively as a guitar. The less strings that a bass typically has might make it feel more limited to perform with, or perhaps its lower range doesn’t allow melodies to sing as clearly as those produced from a higher-pitched guitar. However, they couldn’t be more wrong – especially when it comes to a fretless bass.

Known for their smooth vocal-like tone and demanding a peculiar technical approach, fretless basses are perfect for bassists who are keen to expand their playing horizons. Used by some of the biggest names in the bass world, fretless basses are experiencing a resurgence. And we’re going to reveal why adding one to your setup is a must!

What is a Fretless Bass?

In its simplest form, a fretless bass guitar does not feature any frets. It is therefore akin to a traditional double bass, whereby the notes on its fingerboard are intonated by the fingers. This is different to a conventional bass guitar, which is installed with metal frets that intonate the instrument in order to accurately produce notes from the chromatic scale when fretted.

You’ll find that most fretless electric bass guitars look just like their fretted counterparts. They often come equipped with the electronics you’d expect from a standard bass, and are constructed from customary tonewoods. The only notable difference you’ll observe is obviously the lack of frets on a fretless bass. This means that its fingerboard is typically left blank and will not sport position inlays. However, some fretless basses can have faint lines painted onto their fingerboards to indicate fret placement for accurate note pitching: 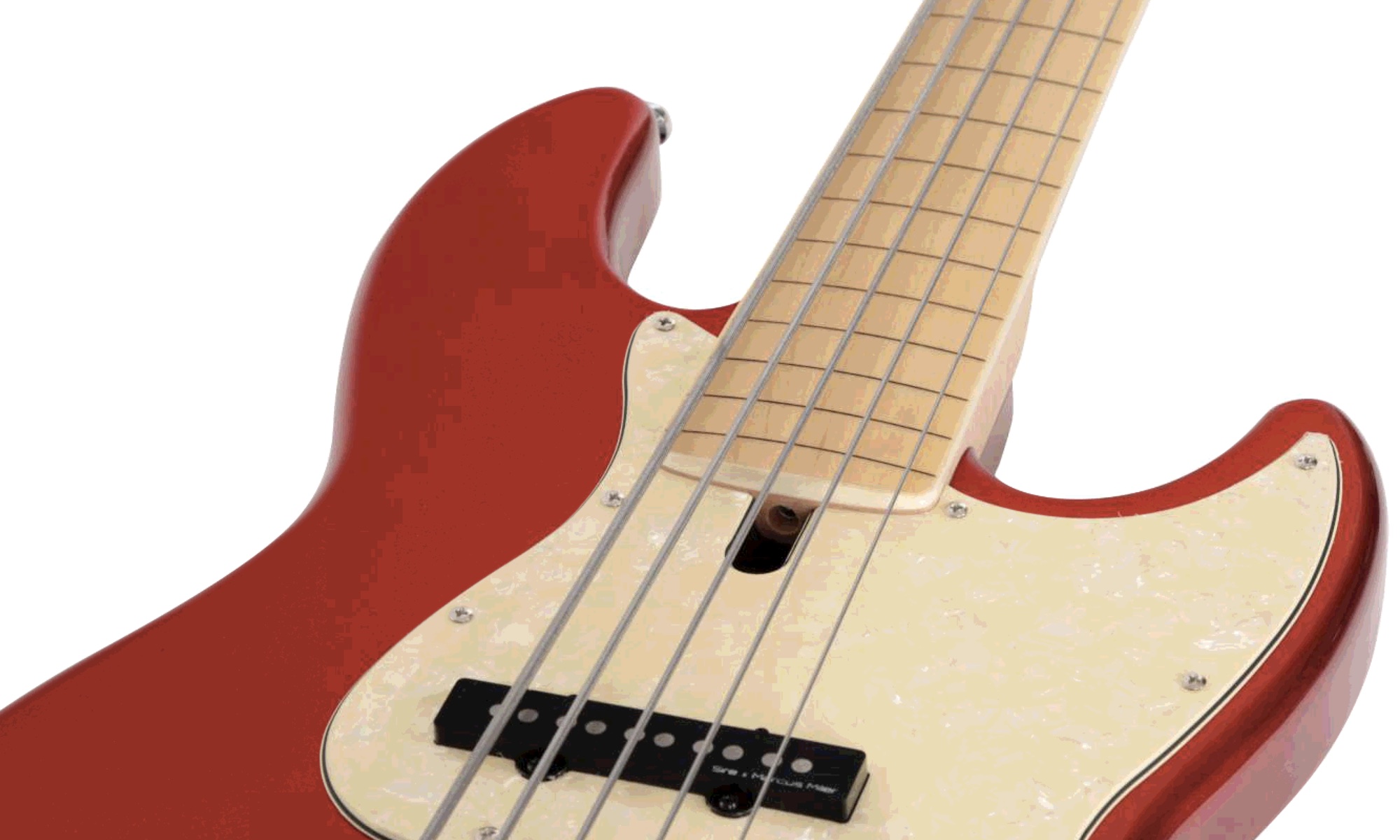 How do you play a Fretless Bass?

Players who are keen to take the plunge into the fretless world will probably ponder this question the most: “is it hard to play a fretless bass?” Ultimately, the answer is no. All it takes is some slight adjustment to your playing technique, and of course practice, in order to become proficient on a fretless bass.

Fretless basses can be played using common right-hand techniques. Most bassists will use their fingers, as that playing style lends itself well to a fretless bass’ famously warm tone. But can you slap on a fretless bass? Yes, you can! Slapping on a fretless bass is achievable, despite what some people say online. However, as slapping is typically used for fast and intricate lines, it can be difficult to precisely intonate notes with your fretting hand. Les Claypool is a famous fretless slapper, and a great example of his eccentric playing can be heard in Primus’ “Tommy The Cat”:

Why should I use a Fretless Bass?

As you are in control of ensuring that notes sound intonated on a fretless bass, you’d be forgiven for asking yourself: “why would I want to play an instrument that gives me more things to worry about? Well, with a fretless bass, you essentially have more freedom to move around the fingerboard. You can smoothly slide in between notes, which is considered as their main advantage over fretted basses and is key to their expressive, distinctive voice.

One disadvantage of a fretless bass is that you cannot apply vibrato in a conventional manner. You can certainly try, but it’s easier to do this on a standard bass as its frets can seat a string to relieve the amount of pressure required to move it up and down with your fretting finger(s). On a fretless bass, vibrato is achieved by sliding your fretting finger side-to-side instead. Some bassists actually find this more controllable though, and it also gives you greater opportunity to create a wider and more exaggerated-sounding vibrato.

A cool trick that many fretless bass players use is to pluck a natural harmonic and then slide their finger up the string to create a rising pitch sweep. This technique can be heard in the popular Pearl Jam song “Even Flow” (skip to 0:20):

Fretless basses are often characterised by their smooth and “woody” sounds. They tend to lack the metallic punchiness of standard electric bass guitars, and rather produce a rounder tone with soft highs and boomy lows. These sonic traits are part of the reason why fretless basses are most synonymous with jazz.

Some musicians compare the sound of a fretless bass guitar with the qualities of the human voice. As you can employ glissando to rise or descend into target notes on a fretless bass, this is very much akin to a technique that most singers will use to create tension. Remember what I said about fretless basses sounding expressive? This is exactly why.

Which strings should be used on a Fretless Bass?

The type of strings used on a fretless bass will contribute hugely to its sound, like with any bass guitar. There are plenty of different string breeds out there which ultimately offer different tonalities. But with fretless basses, there are certain types that are better-suited to their unique design.

Roundwound strings are the most common types installed on electric bass guitars, which deliver bright and aggressive tones. However, as these strings are typically made from a nickel core with a round wrap-wire; they are likely to leave dents in a fretless bass’ bare fingerboard.

They are also quite abrasive as you can feel the ridges of their individual wire wraps. This means that using slide techniques will leave your fingertips feeling sore after extended playing sessions. Despite these factors – some fretless bassists swear by them!

Fretless basses are typically strung with flatwound strings. These are more apt for subtler styles and are far less likely to damage fingerboards. That’s because their core wrap wire is flattened to provide a smoother feel under the fingers – hence their name.

With far less friction than roundwounds, flatwound strings offer a fast and fluid feel that allows you to slide into notes without experiencing any discomfort. However, their flattened wrap-wire construction gives them a fairly dull sound compared to bright roundwound strings. This is partly why fretless bass guitars are known for sounding warm.

Roundwound Vs. Flatwound Strings - Can you Really Hear the Difference? In a long-forgotten episode, Nathan & Lee test out the difference between Flatwound Vs Roundwound Bass Strings! Perfect for spicing up your dream bass guitar, explore the difference in tone, feel & sound in out Flatwound Vs Roundwound shootout! ➡️ https://tinyurl.com/ycxbfvz9 » Shop The Full Range of Fender P Basses Here | https://tinyurl.com/ya8eougq » Shop The Full Range of Fender Jazz Basses Here | https://tinyurl.com/yc2zm7ap * Looks like we forgot to put this video live back in the day. Enjoy an old episode of All About The Bass with Nathan & lee! The Fender Elite Series has since been discontinued from when this video was filmed. The Fender equivalent would now be the Ultra series. Links can be found in the description.* ↪️ Episode Guide ↩️ » 0:00 Intro Jam Between Nathan & Lee » 2:14 Flatwound Vs Roundwound Strings » 4:45 How Do They Sound? » 8:54 Final Thoughts... Ever wondered what the difference between Flatwound & Roundwound strings? Then sit back & enjoy as Nathan & Lee go in-depth on the feel, tone & perks of using each string! Perfect for anyone wanting to spice up their playing, if you're after a different sound then give some Flatwound strings a try... If it's good enough for Pino Palladino then it's good enough for us! 👕 Buy A T-Shirt 👕 | https://tinyurl.com/vdq7rmg You've watched the videos & seen the store, now join the Andertons Family with our exclusive, official merchandise! With free UK delivery on all orders containing only a T-Shirt, Hoodie or Jumper & super low international shipping costs, there is no better time to be an Andertons fan than now! Interested in other Andertons YouTube channels? Click on one of these links to find out more… Andertons Guitar & Bass YouTube Channel: https://goo.gl/kRJCpb Andertons Drummers YouTube Channel: https://goo.gl/9yKSS9 Andertons Keyboard YouTube Channel: https://goo.gl/ns172M Andertons Shopping Web Site: https://goo.gl/TPsG2Q Make sure to subscribe to Andertons TV for more great videos like this: https://goo.gl/aAzyQM #Andertons #FatVsRoundwound #StringShootout https://i.ytimg.com/vi/Z9AVKvLylpE/default.jpg PT11M24S 2020-07-03T14:00:16Z
53221

Which players use Fretless Basses?

The origins of the fretless electric bass are largely unknown, with contrasting accounts as to who designed the first example. However, the instrument was largely popularised by the legendary jazz player Jaco Pastorius, who famously removed the frets on his iconic 1962 Fender Jazz Bass (a.k.a. the “Bass of Doom”). Our ‘All About The Bass’ presenter Lee Voss covered some potent Pastorious bass-lines on a fretless Sire V Series model in this video:

A host of other high-profile names use fretless basses to great effect too. Les Claypool, who I previously mentioned earlier in the article, is often cited as a modern master who even uses tapping techniques to create some of the wacky riffs heard in his band’s music. Virtuosos like Victor Wooten, Pino Palladino and Marcus Miller also frequently experiment with fretless basses, who truly demonstrate just how expressive these instruments can be.

Fretless basses are not as common as their fretted friends. However, at Andertons Music Co. we have a number of brands that offer fretless bass guitars – most notably Sire and Warwick. If you’re unfamiliar with the former, Sire produces some of the best bang-for-your-buck instruments we’ve ever seen. They manufacture fretless versions of practically all of their bass models, from the Precision-style P Series to the ultra-modern M Series: 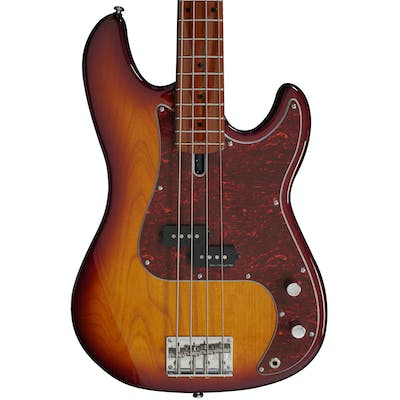 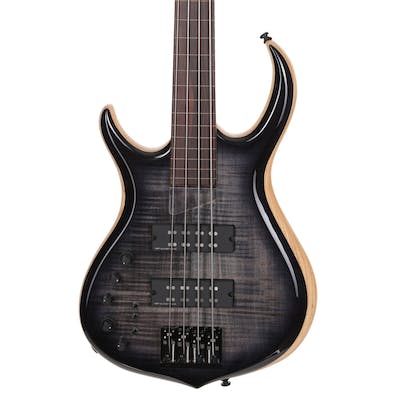 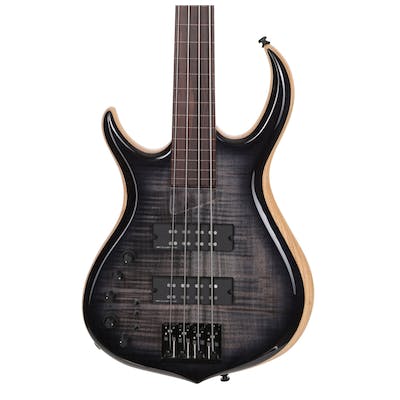 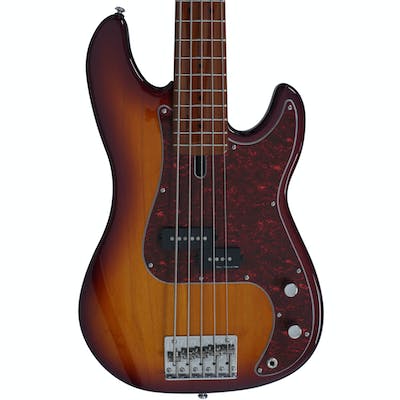 Plenty of high-end bass companies, like Fodera and Carl Thompson, also produce custom-order fretless bass guitars. Outfitted with sophisticated preamps and constructed from exotic tonewoods, these hand-made instruments are built for the most discerning of players.

Interested in finding out more about music gear and expanding your knowledge? Click here to view all of our Learn articles! For further information on the other topics mentioned in this guide and more, check out our related articles: