Recording Drums As A Guitarist – What Are my Options?

Drums form the foundation of most songs, no question. However, as a guitarist, it's unlikely you’ll have access to a proper kit yourself, or know how to play one (unless you’re one of those people who can annoyingly do everything; if so, fair play). In this piece, we explore the best ways of adding percussion to your productions, from MIDI and programming, right through to drum machines and electronic kits. Read on!

So. Your DAW is open on the screen in front of you. You’re sitting there wondering how to take your music up a notch. You want a beat on your track. But how do you get started when it comes to recording drums?

These handy bits of kit have become synonymous with not just genres, but the history of recorded music itself. You’ll no doubt have heard of iconic drum machines like the Roland TR-808. The instrument left an indelible mark on everything from Rap and Hip-Hop to Alternative Rock. They’re the perfect all-in-one solution for adding drums to your compositions. 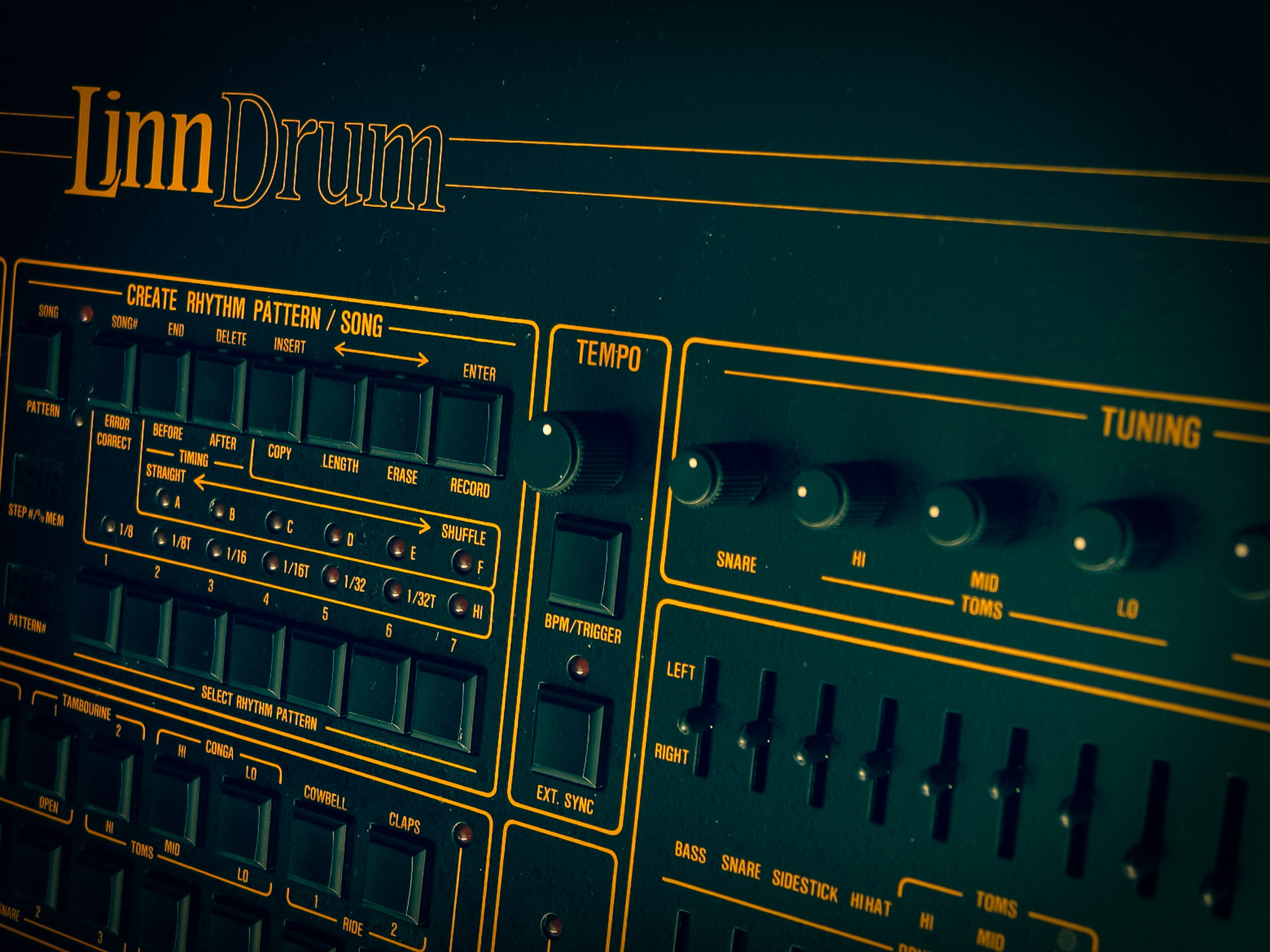 Many modern drum machines deliver realistic sounding tones. Most are packed full of percussion and drum sounds, each of which can be mixed and matched with one another. Some even let you import your own samples. This all gives you the ability to build custom kits from scratch; the beats you’ll craft can be the perfect companion to your guitar playing. Certain models can even be hooked up to your home recording rigs, allowing you to record right into your DAW. 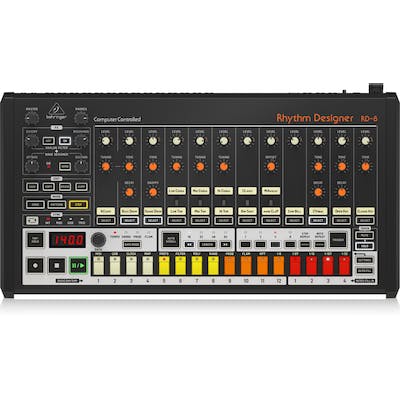 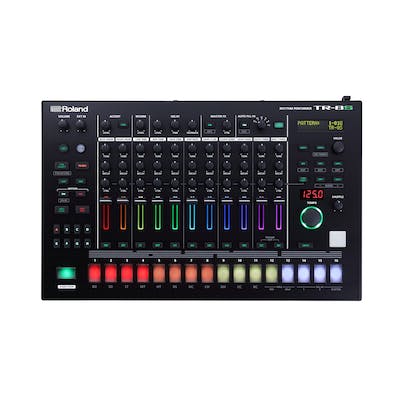 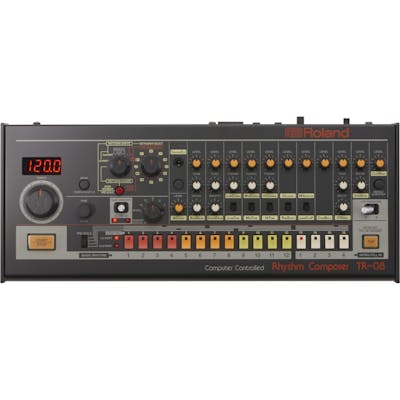 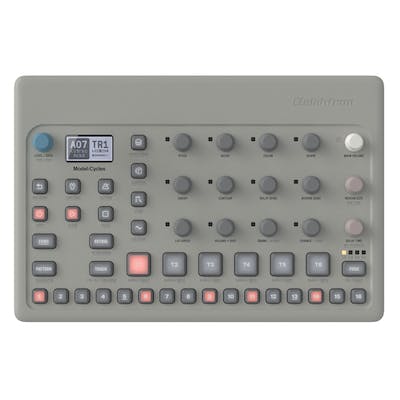 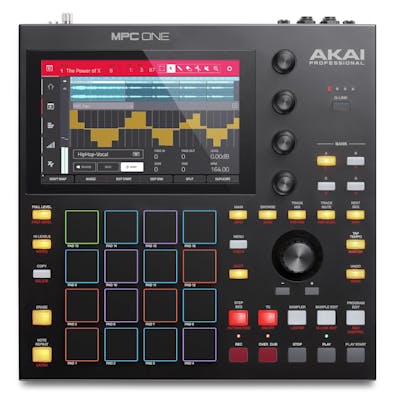 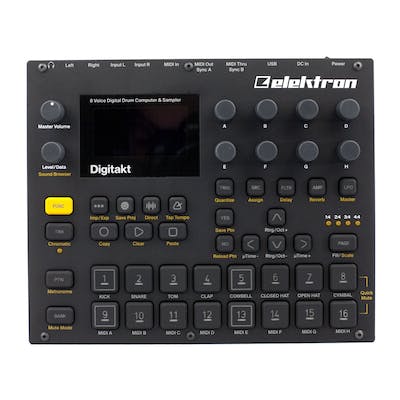 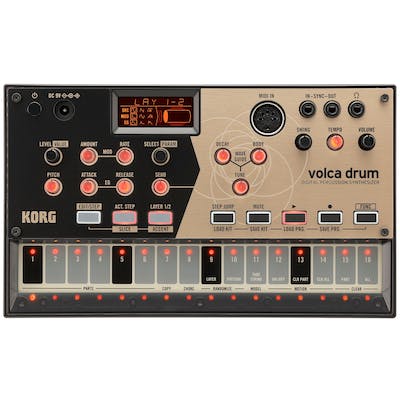 This is probably the most accessible option. Software like Superior Drummer 3 can be an incredibly powerful production tool. This virtual studio contains heaps of professionally sampled percussion and drum sounds. Using this extensive library, you’ll be able to craft unique grooves and kits from the ground up. Swap elements in and out from different sets; apply effects; deep edit, and achieve a truly authentic drum sound.

Failing that, most DAW’s like Logic include basic MIDI drums and/or drum loops. These can be played (or dragged and dropped) into your projects via a USB keyboard or your laptops keyboard. With MIDI, you’re then going to want to quantise the notes you’ve played. This will ensure your rhythms remain in time, allowing you to build other instruments easily on top. 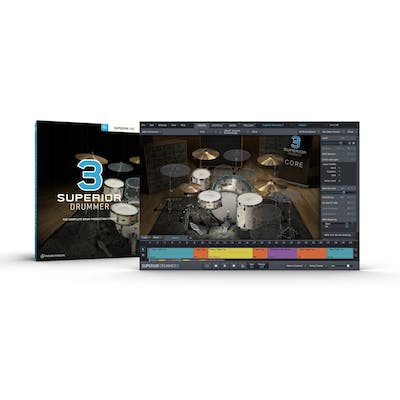 Electronic drums open up a whole other avenue when it comes to recording. In a way, they combine the best parts of actual drums, MIDI and programming. Many kits (both affordable and high-end) now feature integrated audio interfaces. These are ideal for music production. For example, the new Roland V-Drums boasts 28 audio channels (available over one cable) and supports MIDI. Connect via USB or a dedicated I/O and you can record directly into your preferred DAW. 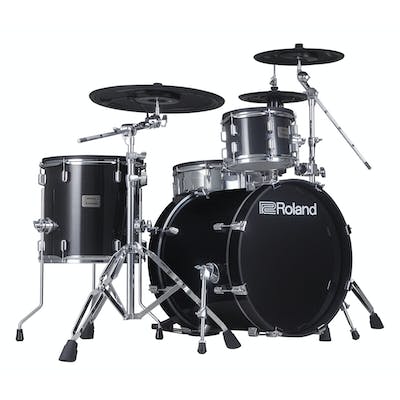 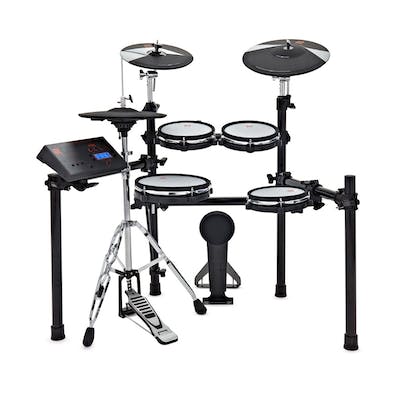 You can even integrate some of the software mentioned above into your workflow. For example, Colin and Rob took a Tourtech kit and ran it through Superior Drummer. This opened up a whole new avenue of great sounds. It let them mix and match kits, allowing for some serious levels of experimentation. It also means you can play directly into your recording software, instead of having to fiddle about with programming and the like!

How to Make Your £400 Electric Drum Kit Sound Like A £4000 Acoustic Drum Kit! Tourtech TT-22M Mesh Drumkit With Superior Drummer 3 Bundle - https://tinyurl.com/vusf455 Ever wanted to make your electronic drum kit sound real? Well, you're in luck! Watch Rob & Colin run through the Tourtech TT-22M Electric kit plugged into Superior Drummer 3 and completely change its sound. With over 1TB of samples, It's easy to get lost in the world of super rare kits and customization. Have a favorite brand you like to use? Yamaha, Gretsch and many more kits are all available for you to pick and choose your custom shells. Could this be a game-changer for beginner electric drum kits? Tourtech TT-22M Electronic Drum Kit - https://tinyurl.com/wc8tjyh ToonTrack Superior Drummer 3 - https://tinyurl.com/tbgjoc7 Interested in other Andertons YouTube channels? Click on one of these links to find out more… Andertons Guitar & Bass YouTube Channel: https://goo.gl/kRJCpb Andertons Drummers YouTube Channel: https://goo.gl/9yKSS9 Andertons Synths, Keys & Tech YouTube Channel: https://goo.gl/ns172M Andertons Shopping Web Site: https://goo.gl/TPsG2Q Buy a T-Shirt: https://goo.gl/TrTe78 Make sure to subscribe to Andertons TV for more great videos like this: https://goo.gl/9yKSS9 #Andertons #SuperiorDrummer https://i.ytimg.com/vi/Lq9HB3XvOLw/default.jpg PT17M5S 2019-12-10T15:18:20Z
120981

We know. Shock horror. An actual drummer. In real life. Playing drums. On your recording. The stuff of nightmares, eh.

Whether it’s a mate, or a gun for hire, you can’t beat an actual drummer (at least that’s what your dad says, who’s been annoying the neighbours since 1981 with his Phil Collins impression). As much as you might hate to admit it, he’s right though. As good as the above options are, none of them can accurately recreate the feel, touch and unique style that a drummer brings to any groove. Any percussionist worth their salt will add heaps of character to your recording.

But how do you go about recording said drummer? Your dad is back again. He’s telling you about how engineers achieved John Bonham’s monstrous sound on ‘When the Levee Breaks’ by capturing the natural resonance of a stairwell. Well, that’s all well and good, but most of us don’t have a massive country house to record in. Or know one of the best drummers in the world, for that matter. However, there is one super simple technique that requires minimal amounts of effort and equipment.

Assuming you’ve got access to an acoustic kit, one of the simplest ways to record it is using the Glyn Johns technique. It was first popularised by the likes of Led Zeppelin and The Who. What makes it great is its simplicity. You only need three mics for it to be effective.

Firstly, you need a pair of condenser microphones that’ll work as your overheads. Just like it sounds, these will sit above the kit. One needs to be placed 4 feet over the set, aimed squarely at the middle of your snare; the other should be positioned next to your floor tom, 6 inches over the rim and pointing over towards your hi-hats. 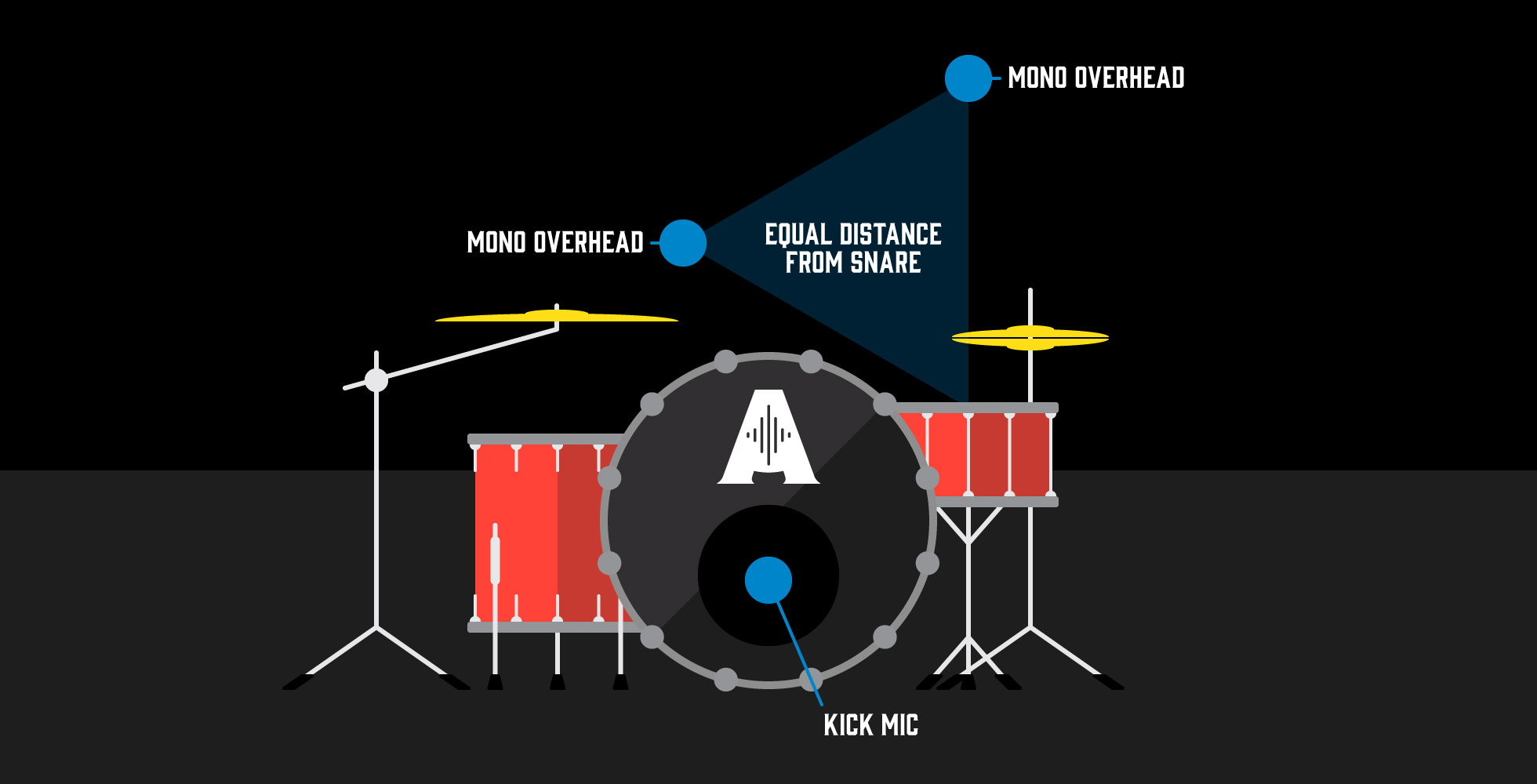 Both will need to be panned and should be of an equal distance from the centre of your snare. You should use your third mic (a condenser or dynamic) to capture the kick drum. If you have one, place it slightly inside the port hole. If not, make sure it’s angled slightly off centre over the head of the drum. A fourth dynamic mic can also be added to capture the snare, if you so choose.

If you want to get even more in-depth with recording drums, you might want to invest in a mic set that specifically caters for the instrument. After all, more microphones mean more options! 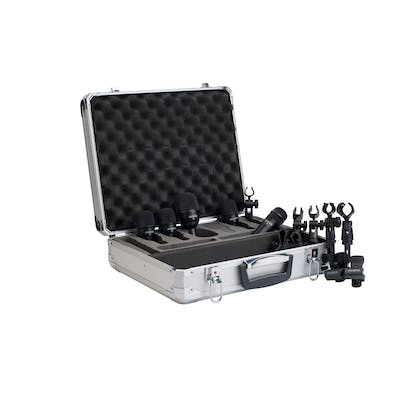 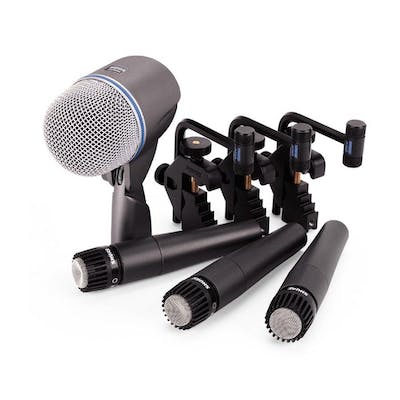 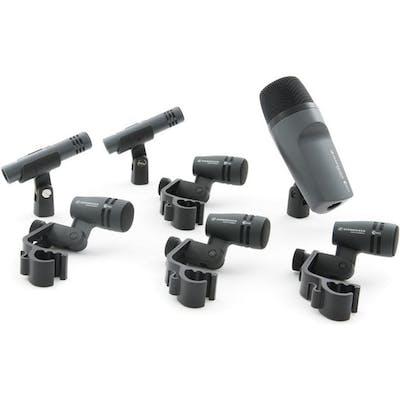 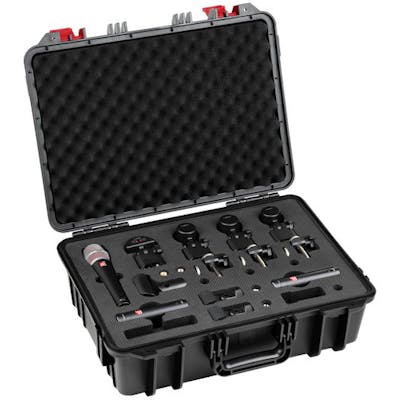 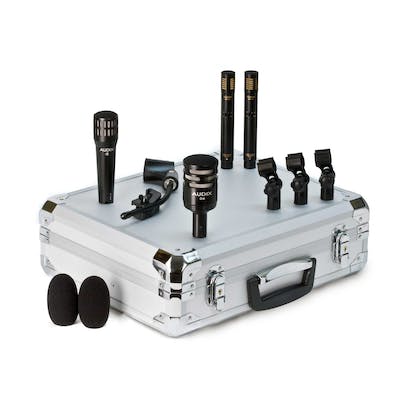 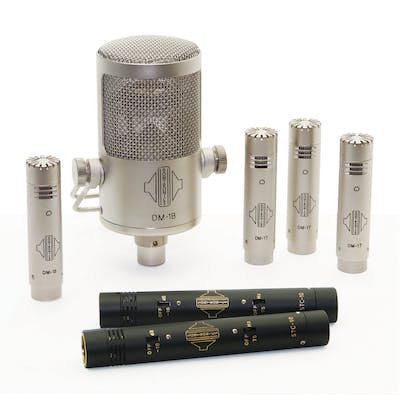 These are just a few ideas to help you get started with recording drums. You might have a completely unique way of working that we haven’t mentioned; if so let us know! If you’ve enjoyed reading this, why not check out the rest of our great learn content?