Does size matter? When it comes to guitars - the answer is yes. In this article, we explain what scale length is, how it can be measured, and why it affects the feel and sound of a guitar.

For some guitarists, the details are everything when it comes to choosing the right instrument. And with a growing number of players now buying gear online, it’s more important than ever to carefully sift through a guitar’s spec-sheet and identify the features that you like before making a purchase.

‘Scale length’ is an essential factor to consider when shopping for a new instrument. And if you look closely enough, you’ll see that some guitars will have scale lengths that are different to others. This might be confusing at first, but as you’ll discover – there are reasons as to why various scale lengths exist!

In fact, we’ve answered all of the following questions to help you to fully understand what scale length is:

What Does ‘Scale Length’ Mean?

‘Scale length’ refers to the distance between a guitar’s nut and its bridge. So in other words, a guitar’s scale length is determined by the gap between the two main components that seat its strings. It can therefore be thought of as the measurement of the maximum sounding length of a guitar’s strings.

How Do You Measure Scale Length?

Although scale length may now seem simple to understand, it’s worth noting that a guitar’s scale length is not completely consistent or accurate. Instead, the value that you’ll see should be considered as more of a general measurement.

This is because, in most cases, a guitar bridge will feature individual string saddles which can be adjusted to move forward and back. These allow you to intonate each string to ensure that the fretted notes sound in-tune across the fingerboard. You’ll often see these adjusted differently, as certain string saddles need to be moved closer to towards the nut to compensate for notes that sound flat, whereas others are moved back to prevent notes from ringing sharp. Therefore, each string should have a slightly different scale length. 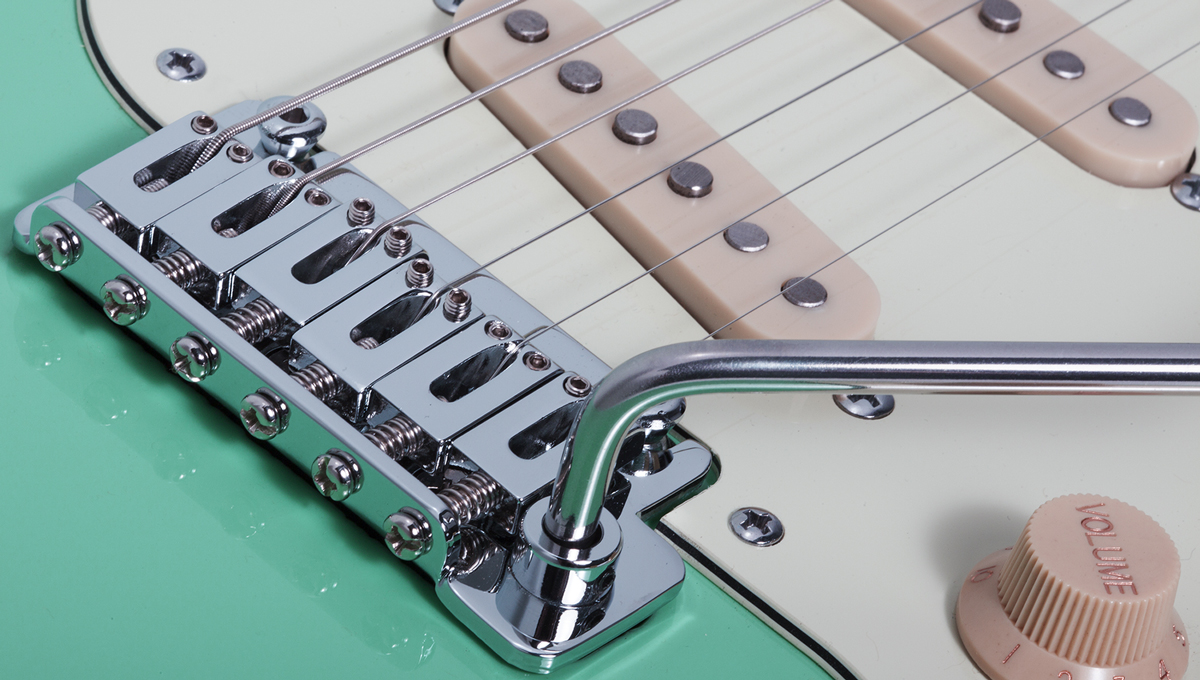 So if that’s the case, how do you accurately measure the overall scale length of a guitar? Well, checking the length of each string and calculating the average is not the best approach. This would be very time-consuming! Instead, there is a much simpler method that most luthiers will follow. The best way to determine the scale length of a guitar is to measure the distance between its nut and the centre of its 12th fret. Once you’ve discovered the value, double it. And voila – you’ve established the scale length.

Keep in mind that guitar scale lengths are typically measured in inches. As the world’s largest guitar brands are American, and for the most part, the USA still uses the older imperial system; measuring in inches has remained the industry standard. Of course, a lot of brands convert these to metric measurements so that the rest of the world can interpret them more easily!

Why Does Scale Length Matter?

As I alluded to in the introduction; scale length is important to consider when shopping for a new guitar. You’ll see some guitars with relatively short scale lengths, and others that appear to be a bit longer. But what difference does scale length make? In these next sections, we explain how scale length affects the playability and sound of guitars.

Scale length hugely influences the overall feel of a guitar. Experienced players will be conscious of this, but beginners and intermediates may be less aware of the effect that scale length has on a guitar’s playability. Obviously, it would be best to physically compare instruments in order to gauge which scale lengths personally suit you. But we’ll do our best to describe them!

Fret spacing is the most noticeable thing you’ll see when comparing guitars with different scale lengths. For example, a shorter scale guitar like a Gibson Les Paul (24.75″) will have frets that are slightly closer together than those on a Fender Stratocaster (25.5″). This is because as scale length increases, so does the distance between frets. 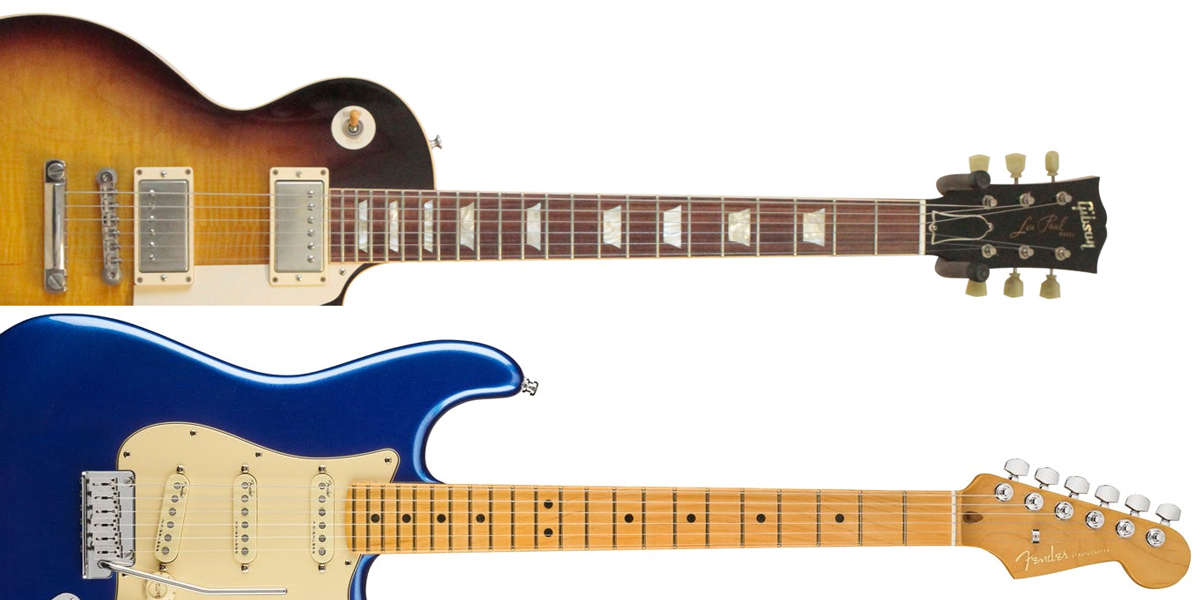 The fret spacing is marginal on guitars with similar scale lengths, and most players wouldn’t feel a discernible difference. However, something like a baritone guitar with a 27″ scale length would have a much more perceivable distance between its frets. It’s therefore important to find a guitar with a scale length that’ll suit the size of your hands. If you have small hands, a short-scale guitar like a Fender Mustang (24″) will feel more comfortable to play than a hefty baritone!

Scale length also heavily affects string tension. In fact, it’s perhaps the most important variable to be mindful of when comparing instruments with different scale lengths. The key thing to remember is that the longer a guitar’s scale is, then the greater the tension needs to be in order to bring its strings up to pitch. A guitar with a short scale length thus requires less tension for its strings to be brought up to pitch.

With that in mind, let’s use the Les Paul vs. Stratocaster scale length example again. If you fitted the same gauges of strings to each of these guitars and tuned them both to standard, you’d notice that the Les Paul would feel more forgiving to play. By that, I mean that the strings would be easier to bend and apply vibrato to. A Strat, on the other hand, would have tighter and more rigid-feeling strings as they’re being subjected to a higher amount of tension.

Scale length makes up only one half of the equation when it comes to string tension. String gauge also plays a big part, and different gauges of strings can be used to compensate for certain scale lengths. So if you’re worried that the strings on your Les Paul feel too floppy, don’t fret! Please excuse that terrible pun.

For example, if a long-scale 27″ baritone guitar is fitted with a set of 10-46 gauge strings, then it might feel difficult to play. The high amount of tension would mean that a lot of force would be required to bend its strings. A thinner set of strings would thus resolve this issue, as their tension would be lower when brought up to pitch.

At the other end of the spectrum, a short-scale 24″ scale guitar with 9-42 gauge strings might feel far too slinky to play, and you may find yourself fretting notes sharp. Fitting heavier gauge strings would therefore create more tension, giving the guitar a stiffer and more controllable feel.

It’s clear that scale length can greatly affect the feel of a guitar, but that it also goes hand-in-hand with the gauges of strings fitted. However, scale length influences a guitar’s sound as well. Before we get into this, it’s worth remembering that the woods used to construct guitars and the types of pickups installed in them will obviously contribute a lot to how they sound. But scale length is an important tonal factor too!

With more string tension present in a guitar with a longer scale length, this means that it should produce a strong and focused sound with great low-end clarity. This is why Stratocasters and Telecasters are known for emitting bright and snappy tones, which can be attributed to their 25.5″ scale lengths. However, it’s also the reason why extended range instruments such as baritones and 7/8/9 string guitars typically have much longer 26″ – 28″ scale lengths, as they ensure that the notes on their lower strings sound tight and clear.

Guitars with short scale lengths tend to sound warmer and a tad fuller than guitars with longer scales, as the lower amount of tension allows their strings to vibrate more freely. This is part of the reason why Les Pauls are known for sounding thick, harmonically rich and generous in sustain.

But what if you want a guitar that offers the crisp note definition of a Fender, combined with the fullness and forgiving playability of a Gibson? PRS has joined the conversation. Back in the mid-’80s, Paul Reed Smith wanted to create guitars that could somewhat fill the gap that existed between Strats and Les Pauls. With his flagship Custom 24 and 22 models, Smith pioneered a 25″ hybrid scale length that could give both Fender and Gibson users a familiar feel and sound, while also creating something completely new and original of his own. The rest is history, as they say.

What Are The Most Common Guitar Scale Lengths?

As we’ve perhaps already established, 24.75″ and 25.5″ scale lengths are the most common you’ll come across – by far. Almost all Gibson and Epiphone models will have the former, while the majority of Fender and Squier guitars will feature the latter.

However, many modern Ibanez, ESP, Schecter and Chapman guitars will also boast 25.5″ scales. This is to cater for contemporary players that perhaps prefer punchier and more articulate guitar tones, especially if they’re into metal. But that doesn’t mean that all guitar manufacturers are following this trend though. For instance, a lot of brands that create Gibson-inspired instruments will still adhere to their shorter scale lengths.

Below, we’ve created a list of the most common scale lengths that you’ll come across when shopping for a new electric guitar, and noted which brands/models feature them:

Short answer – yes. Scale length matters if you’re particularly sensitive about the feel of a guitar. But as we also explained, scale length affects how an instrument sounds too. And lets face it, us guitarists are very particular about our gear – so scale length definitely matters!

Of course, scale length is just one of many things to consider when looking for a new guitar. Woods, construction, hardware and electronics are all just as essential, so make sure to do plenty of research before you buy something; especially if shopping online. Find your dream guitar using the helpful filters on our website, which includes searching by scale length!