What is a ‘Pedal Platform Amp’?

If you’re a guitar nerd who regularly scours internet forums, you'll probably often see the phrase “pedal platform amp”. But what exactly does it mean?

In this blog, we explain what a ‘pedal platform amp’ is and why you should consider owning one - especially if you love to dabble with effects!

More players are now using pedals to form their core guitar tones, and rely less on the natural sounds of their amplifiers. Guitarists who adopt this approach therefore treat an amp as something more akin to a PA system or a reference monitor. In other words, a blank tonal canvas that serves only to project sound. But as it turns out, some particular guitar amps are better equipped at handling the sounds of stompboxes than others. And it is amplifiers like these which are referred to as ‘pedal platform amps’.

But what particular features make an amplifier a good pedal platform? As it turns out, there are a few common traits that enable certain guitar amps to suitably host large pedalboard setups. Some brands even design their amplifiers specifically for use with pedals; indicative of the growing “rig-at-your-feet” trend among modern guitarists.

In this detailed blog, we’ve answered all of the big questions surrounding pedal platform amps. By the end of this article – you just might consider one for yourself!

What Does ‘Pedal Platform Amp’ Mean?

The term ‘pedal platform amp’ describes a guitar amplifier that reacts well to the sounds of stompboxes that are routed through it – especially drive pedals. So in essence, a pedal platform amp acts as a tonal foundation for pedals to easily colour the sound of, and that in turn allows the sonic qualities of those stompboxes to flourish when amplified.

Which Features Make An Amp a Good ‘Pedal Platform’?

There are a few elements in a guitar amp’s design that can make the difference between it being apt for use with guitar pedals – or not. It might turn out that your current guitar amplifier ticks all of the boxes. But if not, the following points should help you to identify a good pedal platform amp if you’re keen to buy one.

Guitar pedal connoisseurs will generally prefer amps with a high wattage (typically 60w +). That’s because high-wattage guitar amplifiers offer immense power and clean headroom; qualities which give pedals that are routed through them more room to breath – so to speak. A high wattage is typically the clearest indicator of a “good” pedal platform amp.

Overdrive and distortion pedals often sound better through high-headroom amplifiers as they’re able to deliver more open and dynamic tones. If you use these pedals through small low-wattage amps then they can sound squashed and overly-compressed, which limits their sonic range. But gain pedals aside, almost any stompbox will produce a bigger and richer sound when connected to a loud, high-wattage guitar amplifier. High-headroom amps just simply enable pedals to show their full potential.

However, some players like how gain pedals behave with low or medium-wattage amps that are more touch-sensitive. For example, overdrive and boost pedals can be employed to push the front-end of a low-wattage amp into textured and harmonically-rich distortion. Players who adopt this approach therefore use dirt pedals to get the best out their guitar amps.

As we’ve already established, a pedal platform amp essentially serves as a blank canvas for your stompboxes. This means that you’d almost always want your core amp tone to be as pure, balanced and clean as possible – to hear the truest reflection of the sounds of your pedals. It’s also likely that you will need to use an unaffected clean sound at some point too!

But do guitar pedals sound best into a clean amp? Generally speaking, the answer to this question is “yes”. That’s because a high-wattage clean amp will not break up excessively at loud volumes, meaning that pedals will retain much of their character without being coloured or hindered by clipping.

However, you’ll find that this isn’t always the case. Some guitarists actually like to use certain pedals in conjunction with an amp that is already distorting. For example, using boost and overdrive pedals into a distorted amp can result in a tighter and more detailed high-gain sound, which is desirable among modern metal guitarists. Some fuzz pedals also interact better with overdriven amps, achieving more harmonic complexity.

Not all guitar pedals have to be plugged into the front-end of an amplifier. That’s because stompboxes can also be inserted into an amp’s effects loop. This is a key feature that almost any keen pedal user would require from an amplifier, and another quality that makes for a good pedal platform amp.

If you’re unfamiliar with what an effects loop is, it’s basically an input and output section (typically at the rear of an amp’s chassis) that lets you route pedals between an amplifier’s preamp and power amp sections. A preamp essentially gives a guitar amp its voice, whereas the power amp is responsible for actually amplifying sound and projecting it through a speaker.

But which pedals are used in an amp’s effects loop? Generally speaking, most guitarists will prefer to place their modulation and ambient pedals through an effects loop. In other words: chorus, flanger, phaser, reverb and delay pedals. By routing these types of stompboxes through an effects loop, it will yield a more natural sound as they are placed after the amps’ preamp stage. Using effects after the preamp will therefore not dramatically change the shape of your base tone, as the preamp would still remain the one of the first elements in your signal chain.

For further reading on this subject, check out the following blogs:

What Is The Best Amp For Pedals?

While we have identified the key attributes that a decent pedal platform amp should have, we haven’t actually discerned which type of guitar amplifier is best-suited for pedals: valve, solid-state or modelling? We’re potentially opening a can of worms here…

Most avid stompbox users would agree that valve amplifiers are most apt for use with pedals. A valve amp’s warm analogue sound simply lends itself perfectly to pedals that can alter its tonal response and therefore excite its overall character. Essentially, pedals just interact incredibly well with valve amps; notably overdrive and boost pedals that can push their tubes harder and into saturation.

Do solid-state amps take pedals well? No not really; digital solid-state amplifiers aren’t very suitable for use with pedals. Although more reliable than their valve-powered counterparts, solid-state guitar amps can sound lacking and don’t deliver that indescribable feel and response that you get from a tube amp.

Although they have improved greatly over time, solid-state guitar amps tend to sound anaemic and flat with pedals. It’s also worth mentioning that many modern digital amps often feature built-in effects too, meaning that pedals aren’t as necessary. You’ll also struggle to find a solid-state amplifier with an effects loop!

Modelling amps are somewhat similar to solid-state amplifiers as they rely on digital circuitry instead of valves. However, modelling amps are designed specifically to emulate the characteristics of popular existing tube amps. This means that they typically sound more authentic. Kemper, Line 6 and Headrush are leaders in modelling amp technology, and even though many of their all-encompassing processors come equipped with built-in effects, they all generally work well with standalone pedals too.

Horizon Devices have specifically engineered their pedals to work well with modelling amplifiers. That’s because the company’s founder, Misha Mansoor (of Periphery), is a proponent of modelling units like the Fractal Axe FX. Horizon Devices’ approach has now been followed by various stompbox brands, who test their products with different types of amps to ensure that they sound good across the board. 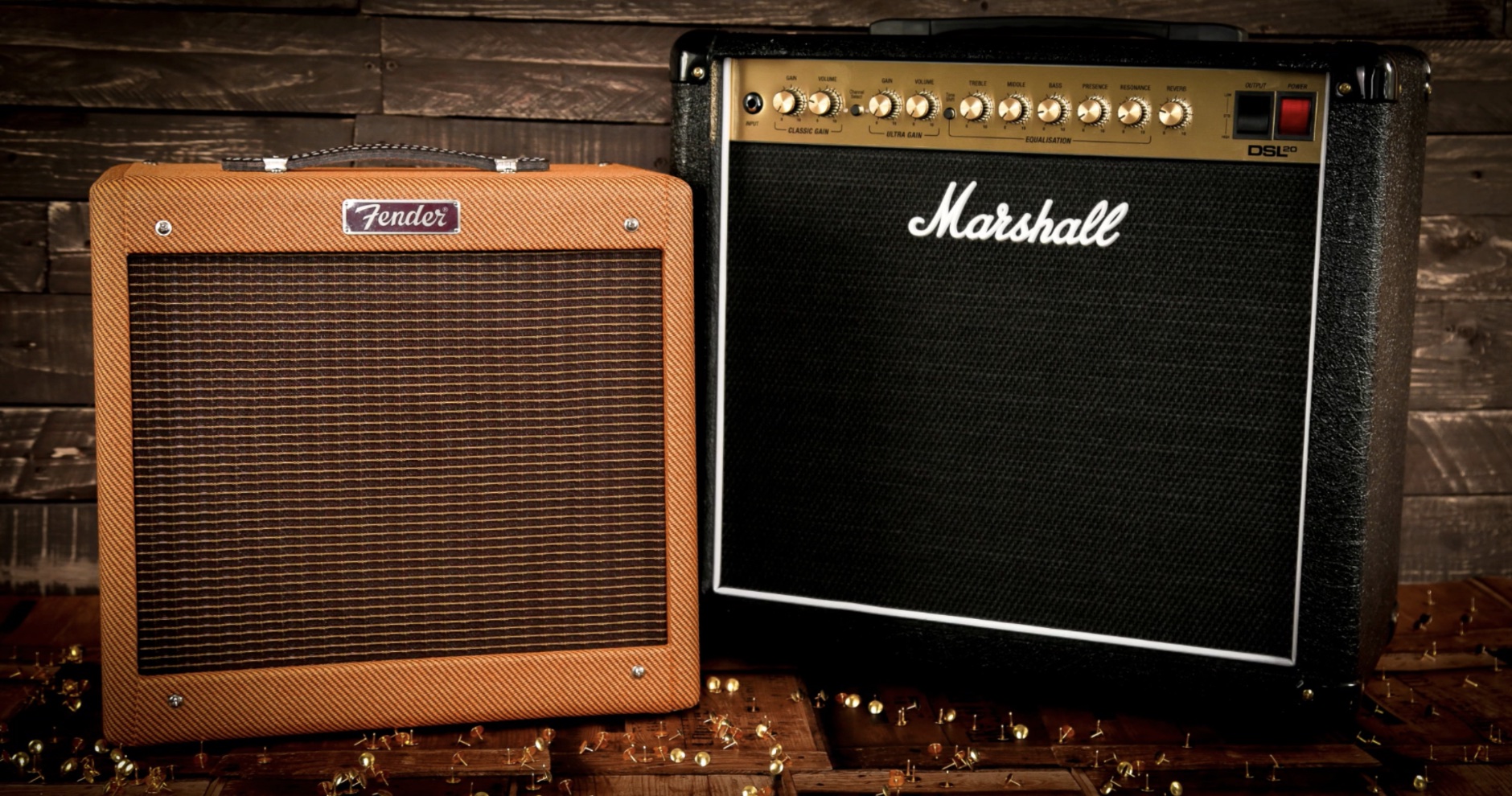 There are hundreds of guitar amp companies out there, from well-established market dominators to small and niche boutique brands. And you’ll find that there are dozens of fantastic pedal platform amps out there which can get the most out of your pedalboard setup.

In the industry, Fender amps are perhaps most synonymous with the “pedal platform” trend. They produce powerful, high-headroom valve amps fitted with either 6L6 or 6V6 power tubes. These are known for their ability to remain clean and articulate at high volumes without encountering break-up. Milkman, Morgan and Rift amps are built to a similar specification, with many of their amp models based on classic American circuits.

Sheer headroom isn’t for everyone though, with many guitarists preferring amplifiers that can break up more easily at lower volumes. British amps are generally associated with this type of sound and design, those from the likes of Marshall, Vox and Orange. Typically equipped with EL34 and EL84 power tubes, amplifiers from these companies not only produce sweet saturated sounds when turned up, but also have a focused and slightly compressed quality. This can be particularly desirable for contemporary players who like to use high-gain pedals.

Why Should I Use a Pedal Platform Amp?

If you’re a pedal fanatic and you prefer to craft your core guitar tones from your stompboxes – a pedal platform will simply bring out the best in them. A clean, high-wattage valve amplifier with an effects loop is generally the way to go. It will give your pedals more breathing space and will allow you to effectively separate your ambient/modulation pedals from your dirt boxes; resulting in a sound with excellent clarity.

Interested in finding out more about music gear and expanding your knowledge? Click here to view all of our Learn articles! For further information on the other topics mentioned in this guide and more, check out our related articles: