In this blog, we’ve pitted Fender’s immensely popular Player series guitars and basses against their high-performance counterparts from the new Player Plus range! Are these latest models the best Mexican-made Fenders yet? Read on to find out...

Fender isn’t afraid to innovate and improve. In fact, we saw an example of this in early 2021, with the musical instrument giant expanding its American Ultra series with new, revved-up ‘Ultra Luxe’ guitars — kitted out with even more premium appointments like Floyd Rose trems and stainless steel frets. And now, Fender has taken its best-selling Player range up a notch with their brand new Player Plus series!

First things first, Fender’s Player Plus models aren’t replacing those from the existing Player series. It’s actually just like the Ultra Luxe lineup, in that it’s a smaller sub-series which encompasses various core Fender models like Strats, Teles, Jazz Basses & P-Basses — all upgraded with modern and ergonomic features that performance-hungry musicians are sure to appreciate. In a way, the new Player Plus series is actually replacing the old Fender Deluxe range.

In Fender’s own words: “Advancing the successful Player series platform, the new Player Plus instruments are built for players looking for the perfect tool to spark their creativity and stand out from the crowd.” It’s a great marketing line, but what are the key differences between Fender’s Player Plus and Player series guitars? Well, that’s the exact question we’re going to answer in this extensive blog!

Player Plus vs. Player Series – Similarities 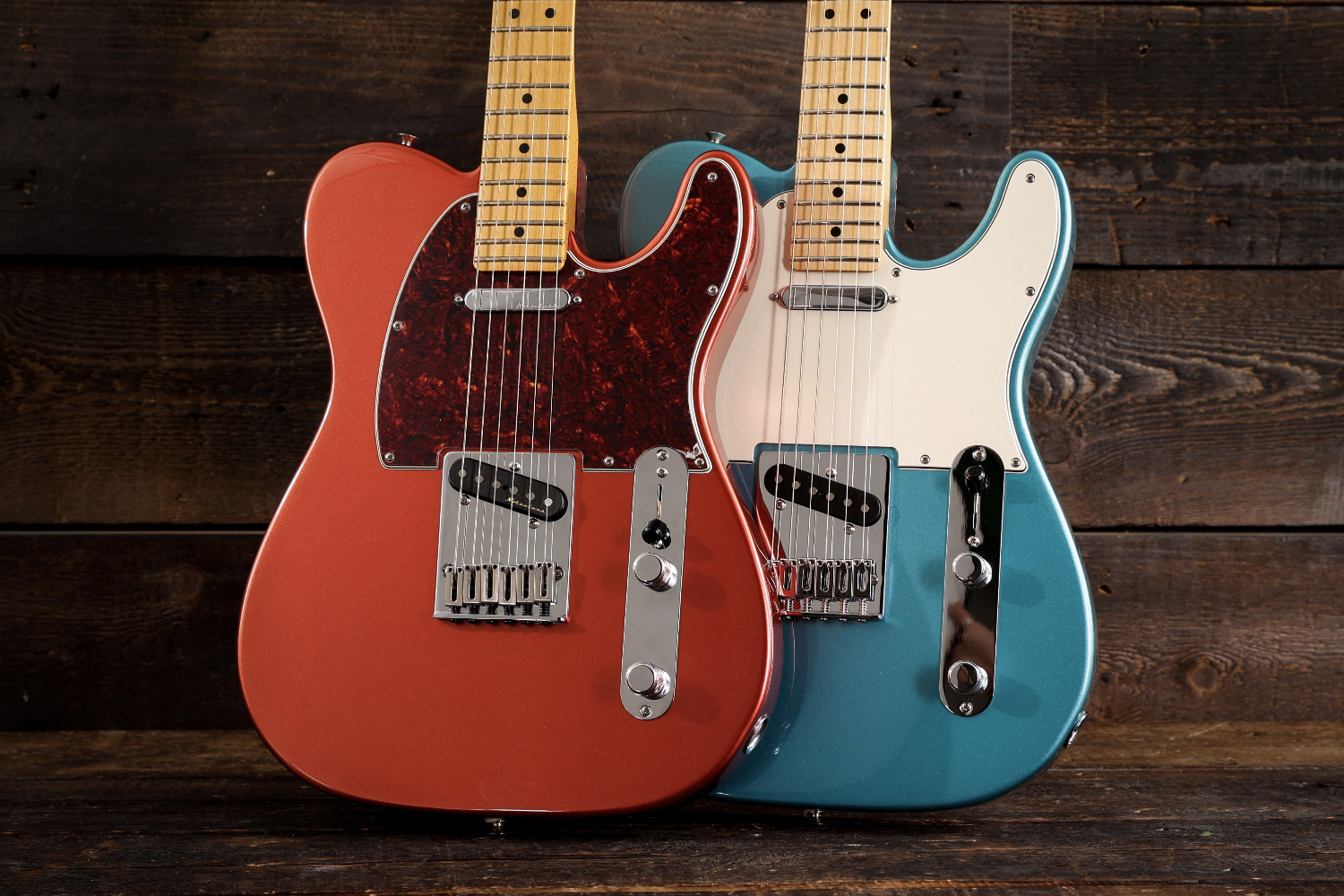 Before we look at the main differences between the instruments from the Player and Player Plus series’, let’s quickly go over their similarities. First of all, these models are all built in Fender’s Ensenada factory in Mexico. This means that they’re among some of the most affordable guitars and basses produced by the brand. Naturally, the Player Plus models are more expensive because of their enhanced specs, but the build quality and level of craftsmanship is practically equal.

Below are some of the key features shared by the electric guitars and basses from the Fender Player Plus and Player series’:

Player Plus vs. Player Series – Differences

While the instruments from both the Player Plus and Player series’ share some key elements, this next section uncovers the sheer amount of differences — both large and small — that they actually have. 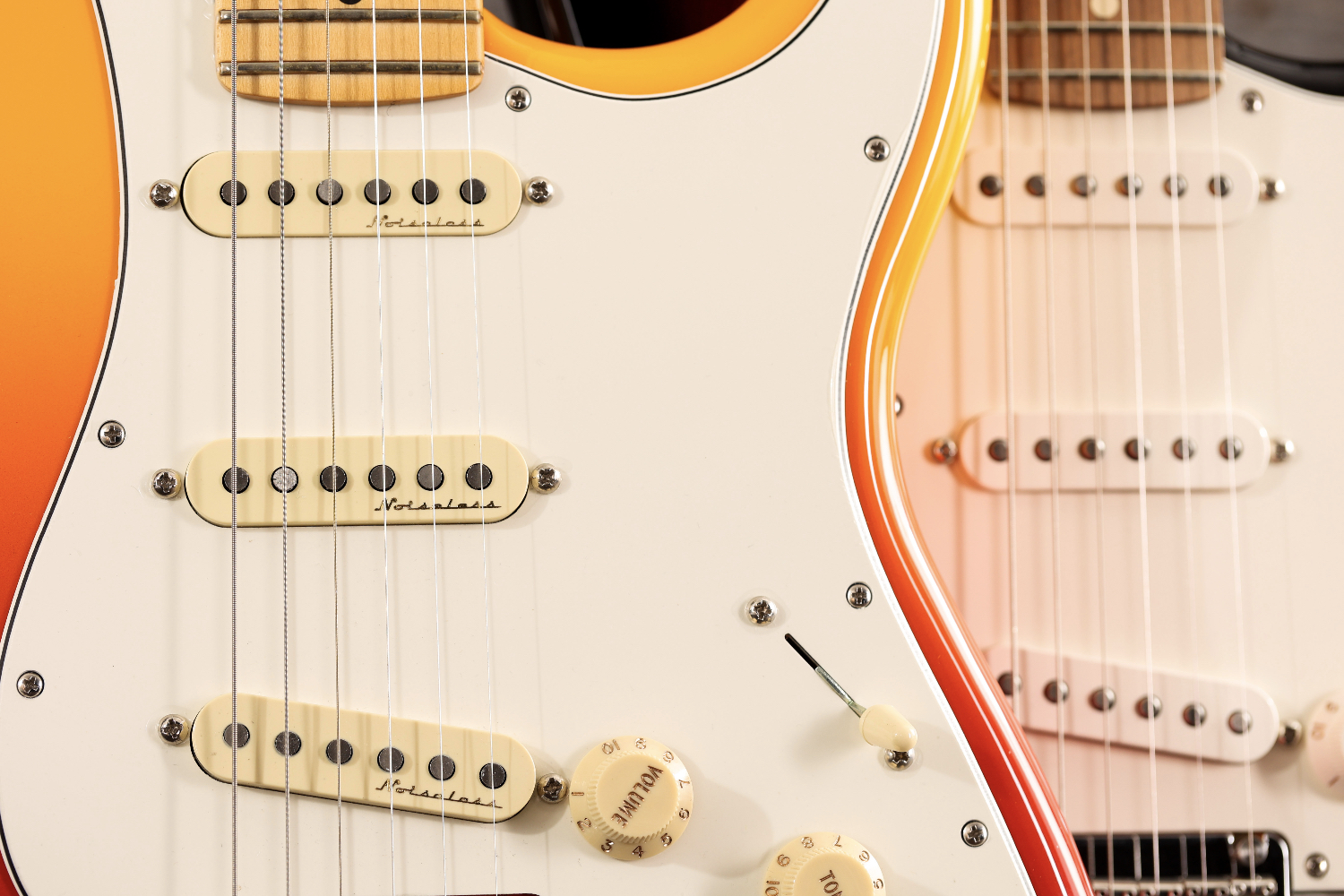 The newly-designed ‘Noiseless’ pickups in Fender’s Player Plus models are a huge upgrade. While the Alnico pickups in the standard Player series guitars and basses provide legendary Fender tone, the ‘Noiseless’ versions do that and more — being free of hum and delivering a clearer sound with better balance across the frequency spectrum. 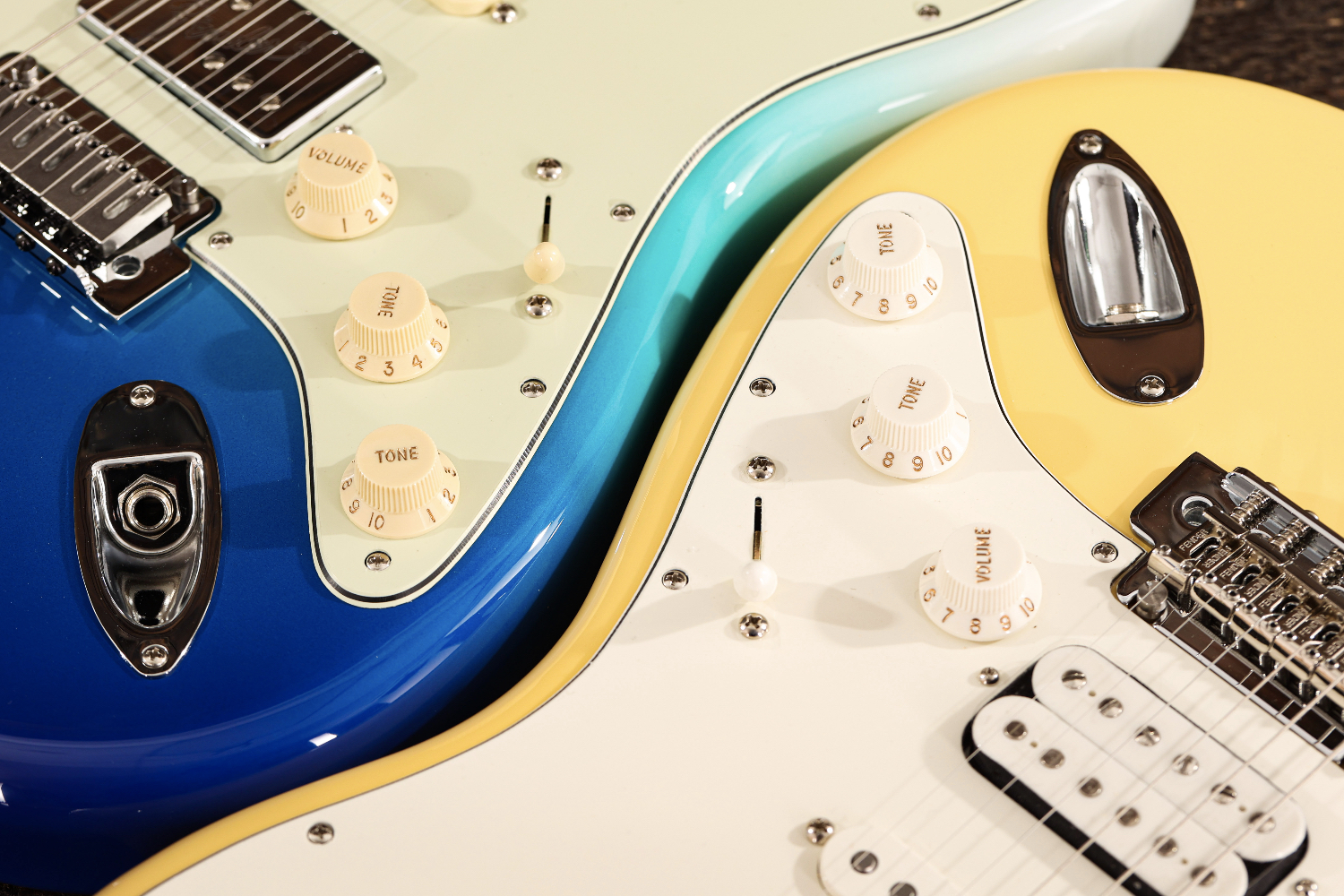 Auxiliary switching on Fender’s Player Plus electric guitars allow you to access more pickup combinations for greater tonal versatility. Add the neck pickup to switch positions 1 and 2 on the Strat and Nashville Tele models, split the humbucker on the HSS Stratocaster, activate series mode on the standard Telecaster for increased output and body — the possibilities are almost endless!

A treble-bleed circuit is installed as standard on each Player Plus series electric guitar. This is typically an aftermarket modification that only the most tone-obsessed of guitarists make! It essentially retains all of the crisp high-end in your signal when you lower the volume knob on your guitar, which automatically engages as you roll back the pot. This is yet another elevated feature of Fender’s Player Plus guitars.

The active/passive circuitry at the heart of Fender’s Player Plus bass guitars is, without doubt, one of the coolest upgrades across the entire new series. In passive mode, you can attain the warmth and thunder of a P-Bass and the punchy snarl of a Jazz Bass. Engage active mode via the mini toggle though, and you’ll switch on an 18-volt preamp with a flexible 3-band EQ that provides precise tone-shaping potential. 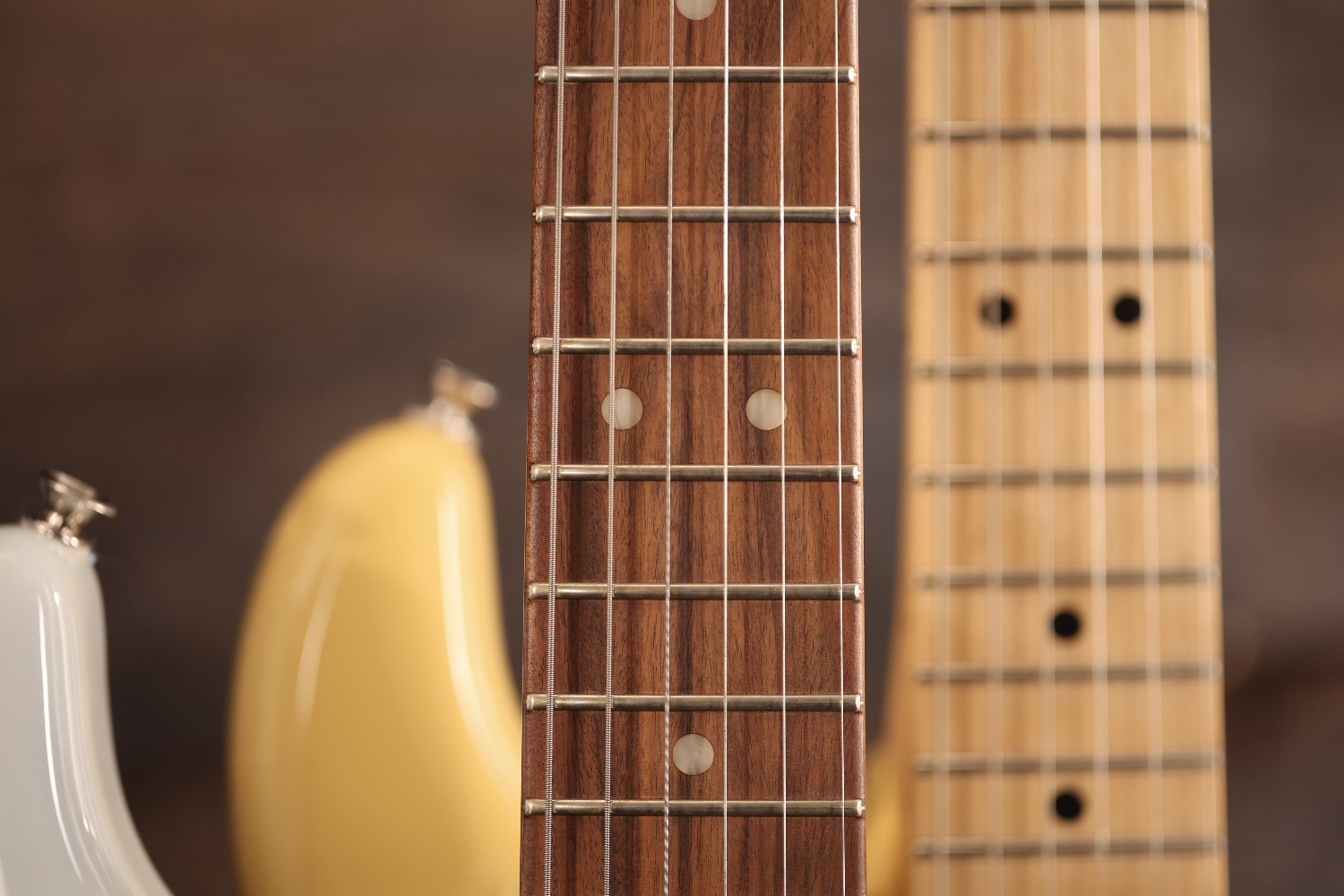 Rolled fingerboard edges are considered a luxury. It’s a feature often reserved only for high-end guitars and basses, but Fender has brought this premium feature to its affordable Player Plus series. A rolled-edge fingerboard offers a silky-smooth and “broken-in” feel, with no chance of sharp fret ends spoiling your musical flow. Trust us, this is a huge playability plus-point for the Player Plus range!

A 12” radius is unusual for Fender guitars and basses. 9.5” is the customary specification for most of their modern models, and 7.25” is synonymous with their vintage-inspired offerings. With a 12” radius, you’re provided with a slightly flatter fingerboard that makes fast passages feel easier to play. It also prevents notes from choking when performing string bends, meaning that you can set your action slightly lower too. 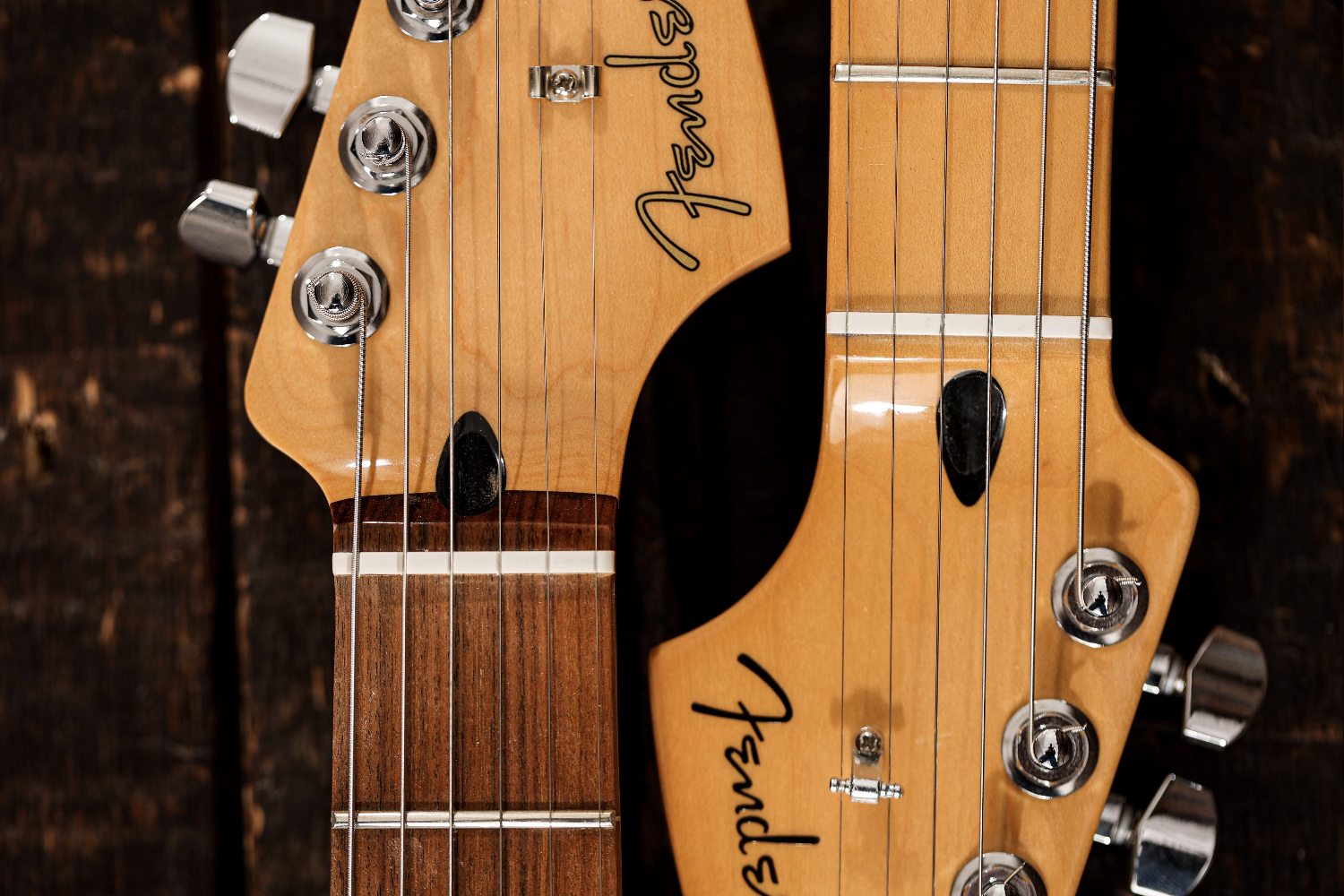 The wider nut width on the Player Plus electric guitars means that their strings are spaced slightly wider apart than those on the standard Player models. This is all a matter of preference and the difference is fairly subtle, but contemporary guitarists generally prefer a wider profile as it gives them more consistent string spacing along the length of the entire neck — for more predictable playability. 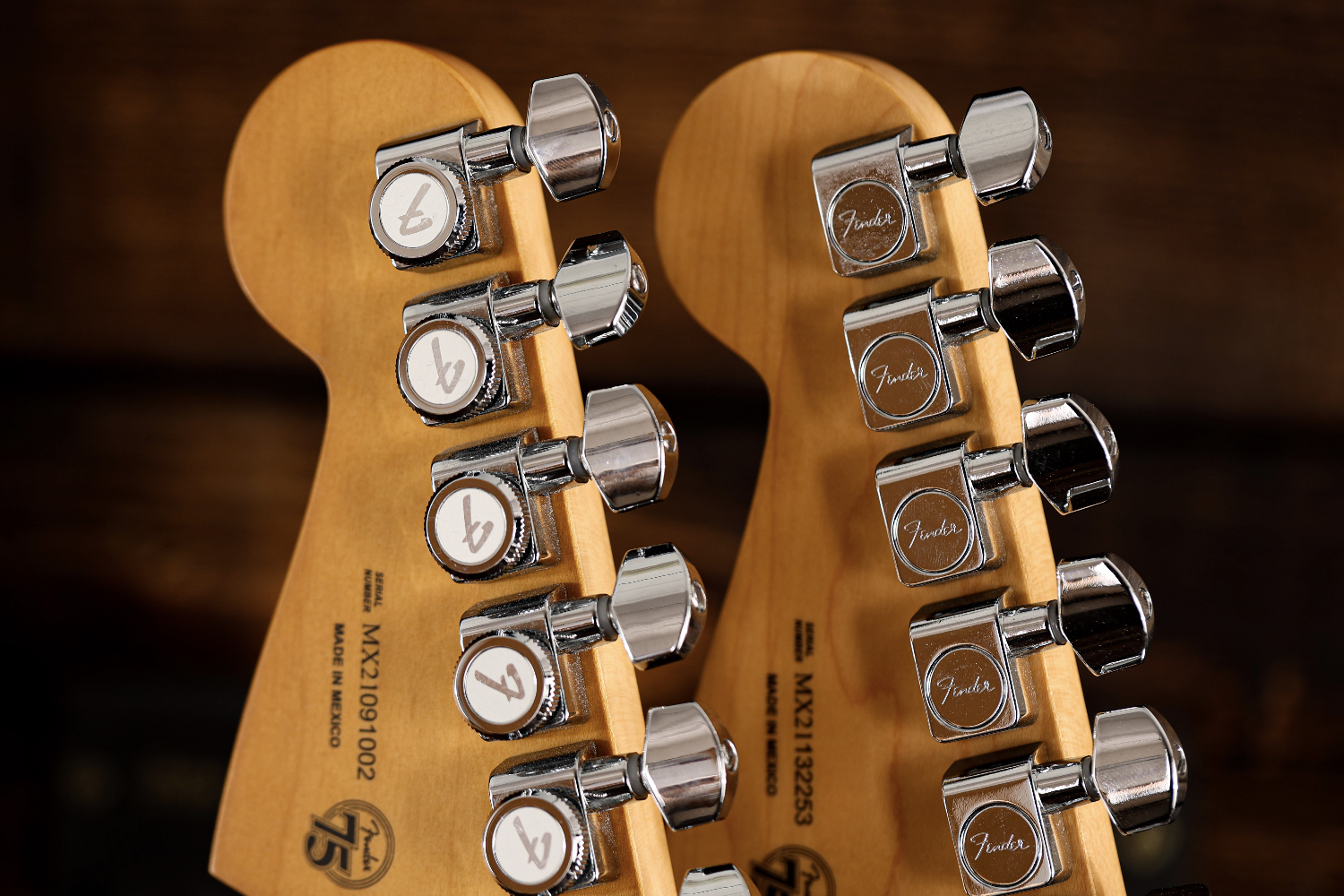 Locking tuners are a must-have for most modern players. While a lot of guitarists resort to buying aftermarket sets that may not even retrofit their guitars, Fender has gone the extra mile and added these as standard on all of their Player Plus electric guitars. The only other Fender production models fitted with these are their top-of-the-line American Ultra guitars — so they’re quite exclusive! With locking tuners, you can enjoy both improved tuning stability and faster string changes. 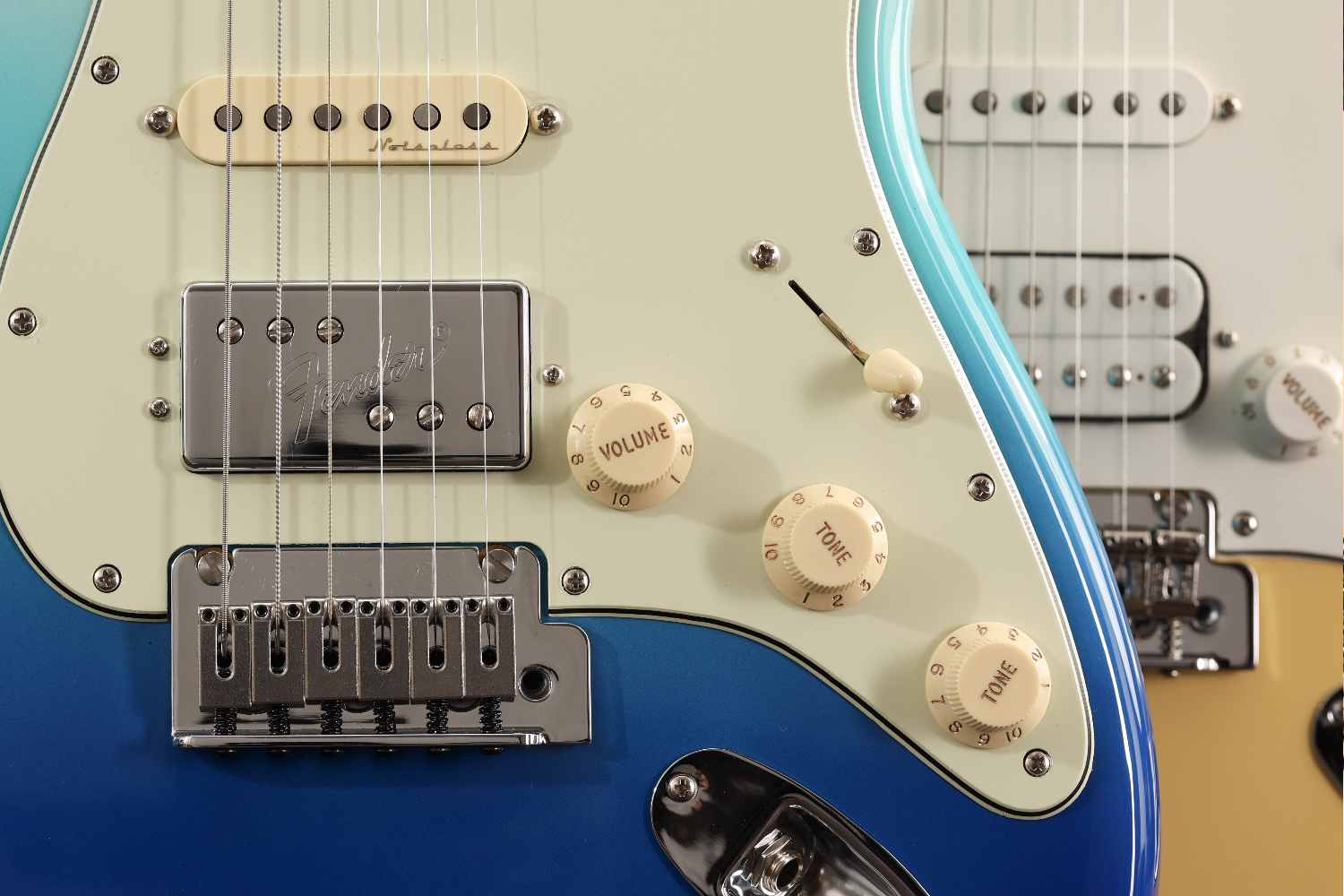 Fender’s Player Plus Stratocasters come fitted with steel block string saddles. Not only do these saddles look nicer than the traditional bent saddles found on most Fender Strats, but they serve an important tonal purpose too. With greater density, they boost both sustain and treble to yield a more contemporary sound.

Experienced bassists will be well-aware that the type of bridge on their instrument can make a huge difference sonically. The thick steel design of Fender’s acclaimed ‘HiMass’ bridge, often reserved for just their American-made models, yields a huge tone and dramatically enhances sustain. Slotted saddles ensure even string spacing too, for consistent playability. 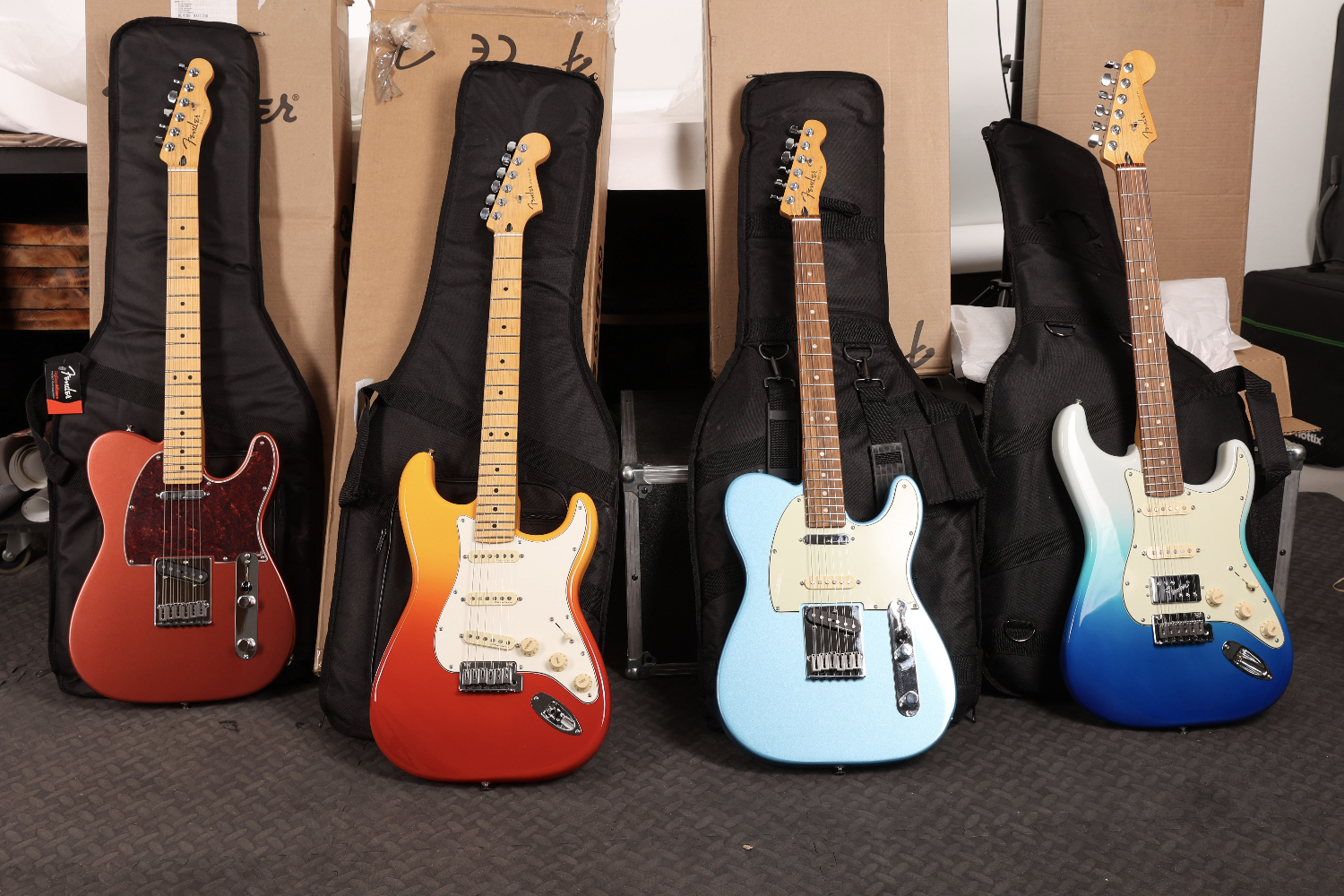 Throwing in a gig bag with a Player Plus guitar/bass is like putting the cherry on top of an exquisite cake. Rugged and ergonomic with its backpack-style straps and pockets, this lightweight Fender fabric case offers brilliant protection and is essential for the gigging musician. 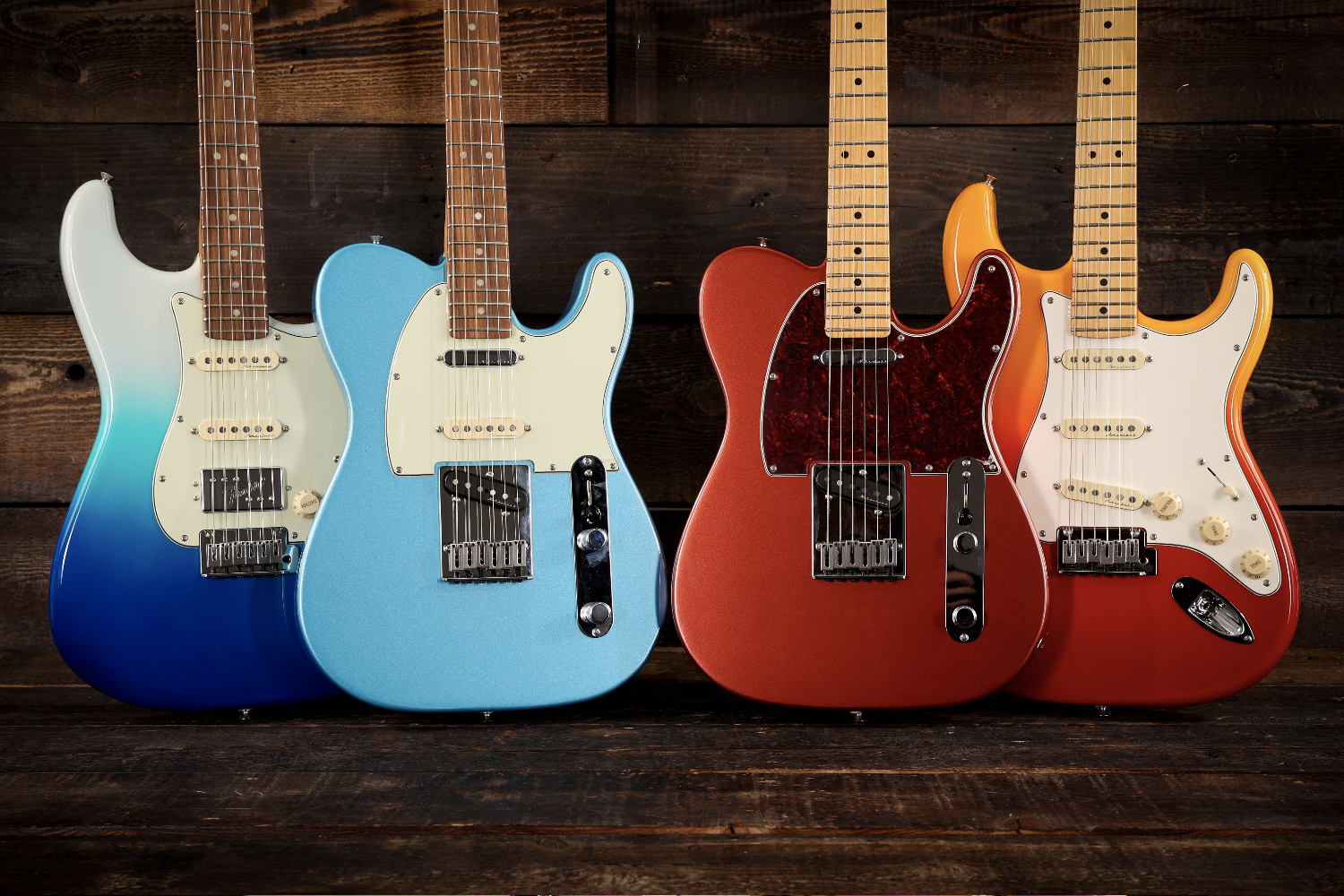 There are plenty of timeless and iconic colour options available in the standard Fender Player series. However, the Player Plus models feature an all-new palette of striking finishes which will instantly stand out from the crowd. Solid colours like Cosmic Jade (green), Opal Spark (blue) and Aged Candy Apple Red possess plenty of modern flair, while the gradient-fade finishes such as Belair Blue, Tequila Sunrise (red/orange) and Silver Smoke (black/white) have a totally unique vibe!

Are Fender Player Plus Guitars Better than Player Series Models? 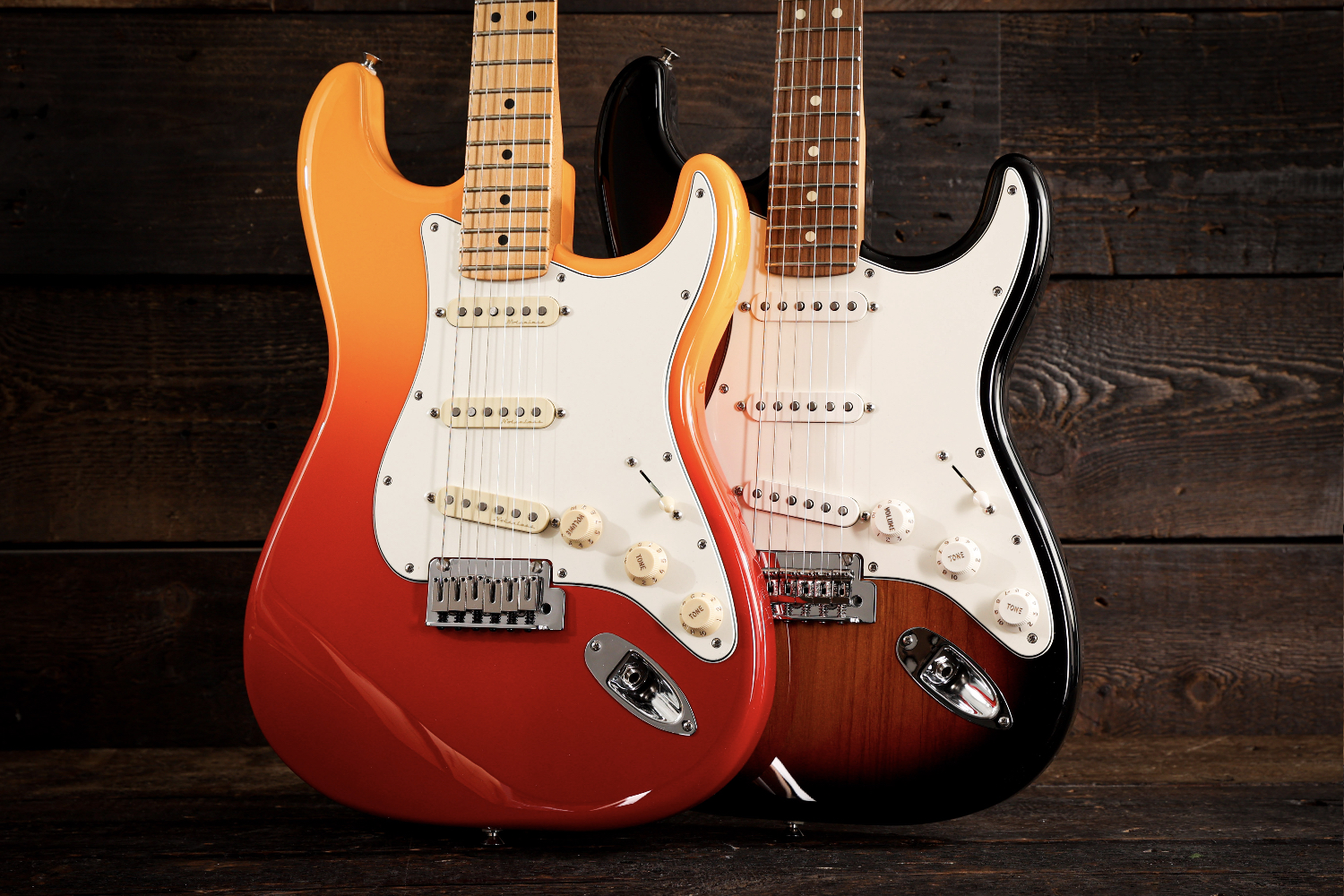 Objectively, yes — they are. Based on the superb player-centric features that they have, designed to enhance both feel and tone, it’s hard to argue otherwise. If the question is ‘are Fender Player Plus guitars worth the extra money?’, then the answer is more debatable. There’s quite a big price gap between them, and although that’s understandable based on their specifications, the Player Plus models are almost reaching American Performer territory. And a lot of guitarists would rather buy a basic US-made Fender over a high-spec, Mexican-crafted instrument.

If the country of origin is of no concern to you, then a Fender Player Plus guitar could feel and sound better than one of the lowest-tier American Fenders. They are professional-grade instruments after all, designed for players who want to go “all in”.

We hope that this blog has made it easy to discern the differences between Fender’s Player Plus and Player series guitars. However, no amount of words can truly convey how these new models sound in action — so check out our Andertons TV videos below: