Fender has answered the calls of its fans and released a more affordable, Mexican-made version of its Acoustasonic Telecaster! But how does the new ‘Player’ model stack up against its American-crafted counterpart? That’s what we’re about to find out…

It’s fair to say that when Fender launched their American Acoustasonic Telecaster at the 2019 NAMM Show, it polarised the guitar community. Some people loved it, some people hated it. But in the time since, many initial pessimists have warmed to its looks and innovative hybrid design. We don’t think that even the most cynical of players can deny just how clever and versatile the instrument is!

Fender has expanded its American Acoustasonic series over the last couple of years with Strat and Jazzmaster-shaped variants. These each boast unique features of their own, which set them apart from the original Telecaster model. But while introducing these guitars improved variety within the range, none of them were any cheaper than the Tele. This means that they may have still put off partially-interested customers who couldn’t justify spending that much money — especially on guitars that are so quirky.

The new, Mexican-made Fender Acoustasonic Player Telecaster is aimed at those musicians. It looks practically identical to the USA model, and at about 2/3rds the price — it’s far more accessible. But this guitar isn’t just for budget-conscious fans of the American Acoustasonic Tele. That’s because Fender aspires to draw a new audience with it; those after the ultimate “sonic shape-shifter”. So apart from their prices and where they’re made, what else makes these instruments different? 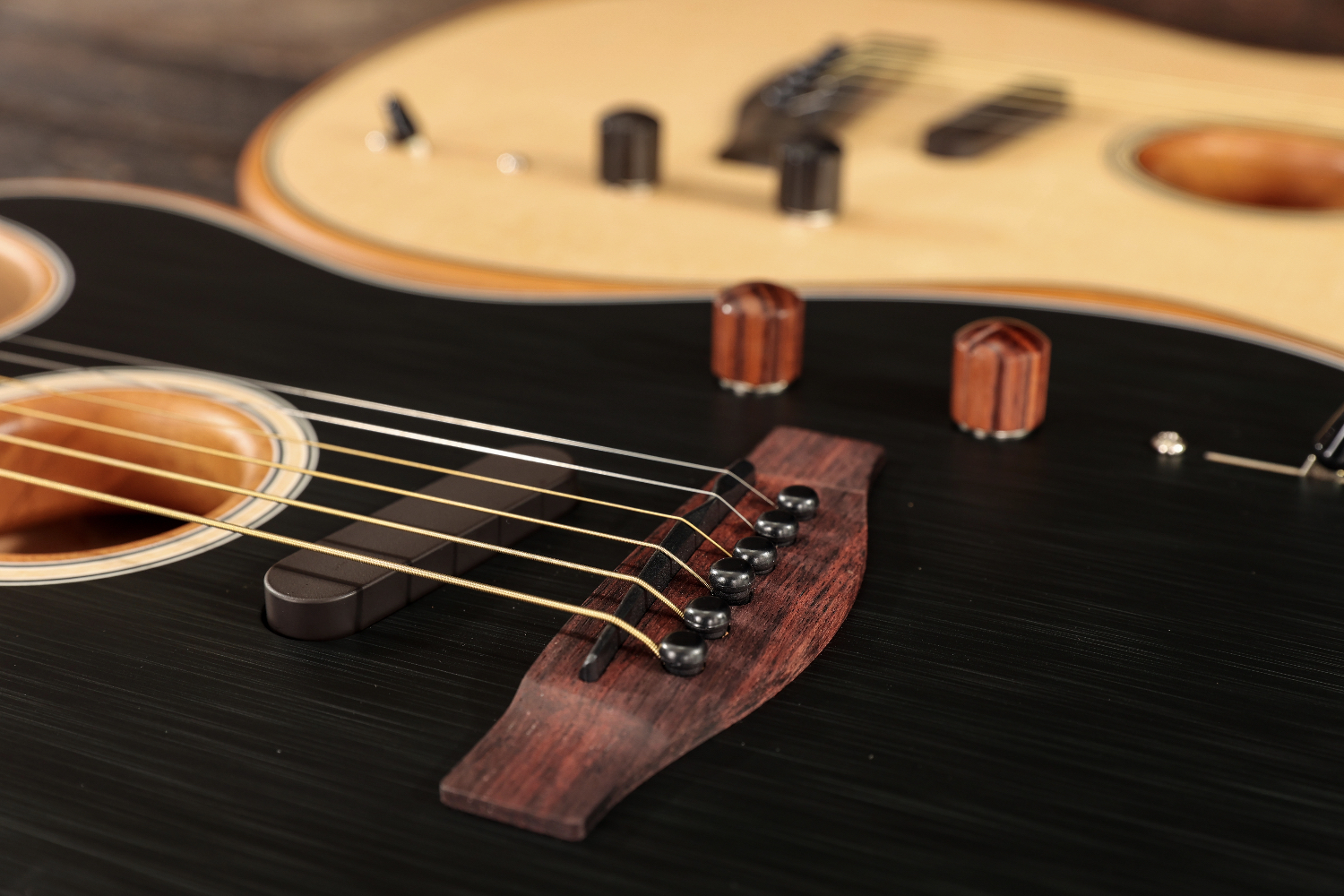 Before we look at the main differences between Fender’s American and Player Acoustasonic guitars, let’s quickly go over their similarities. And honestly, there are more similarities than there are differences! According to our Acoustic Paradiso presenter Ben Smith, these guitars practically “feel the same” and their bodies/necks, dimensionally and materially, are identical.

Below are some of the key features shared by the Fender American and Player Acoustasonic Telecaster guitars: 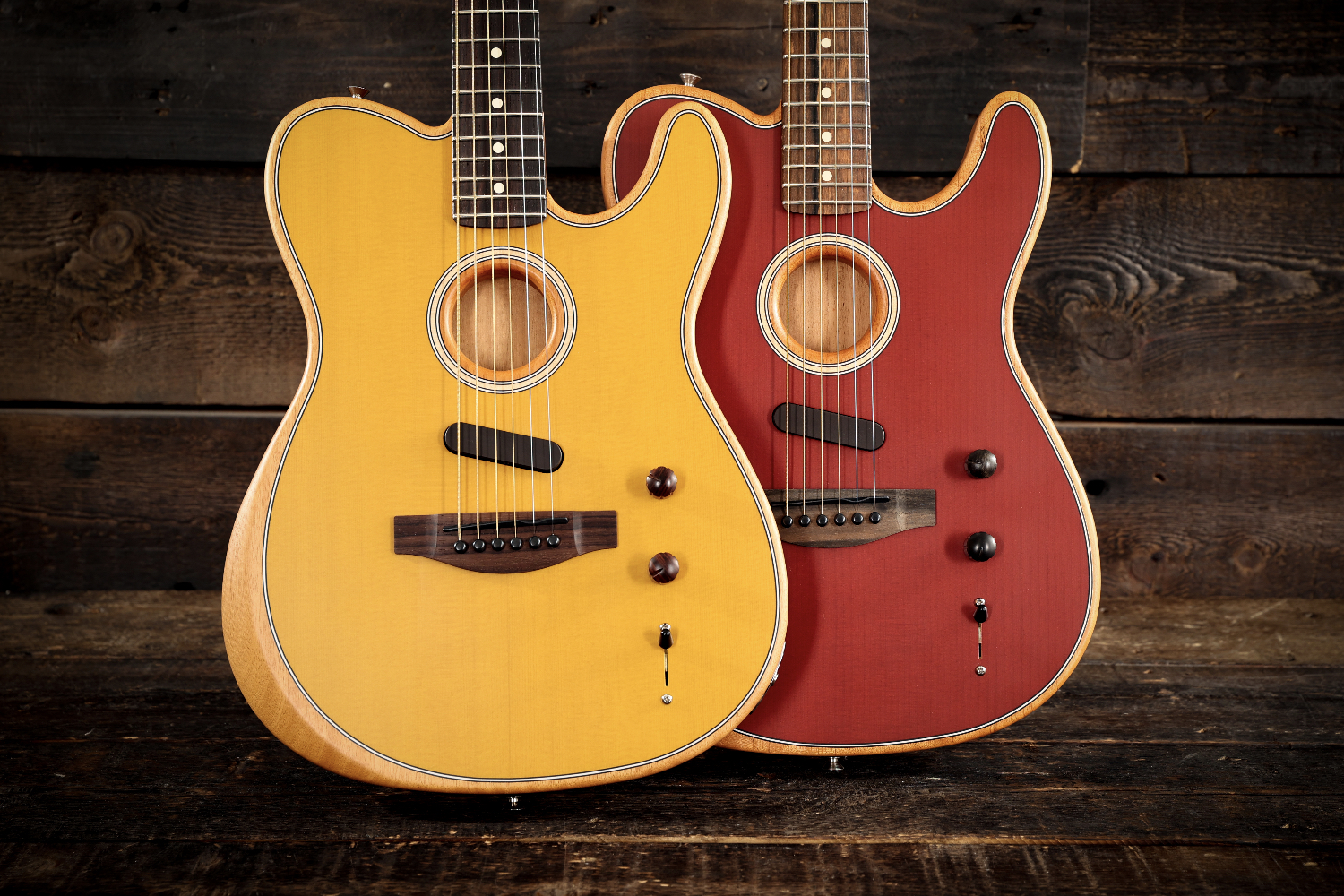 While the Acoustasonic Telecasters from both the American and Player series’ share many key elements, this next section uncovers some differences that are definitely worth knowing before you choose which to buy. They might be extremely similar in terms of their construction, aesthetics and feel — but under the hood — the American model offers quite a bit more… 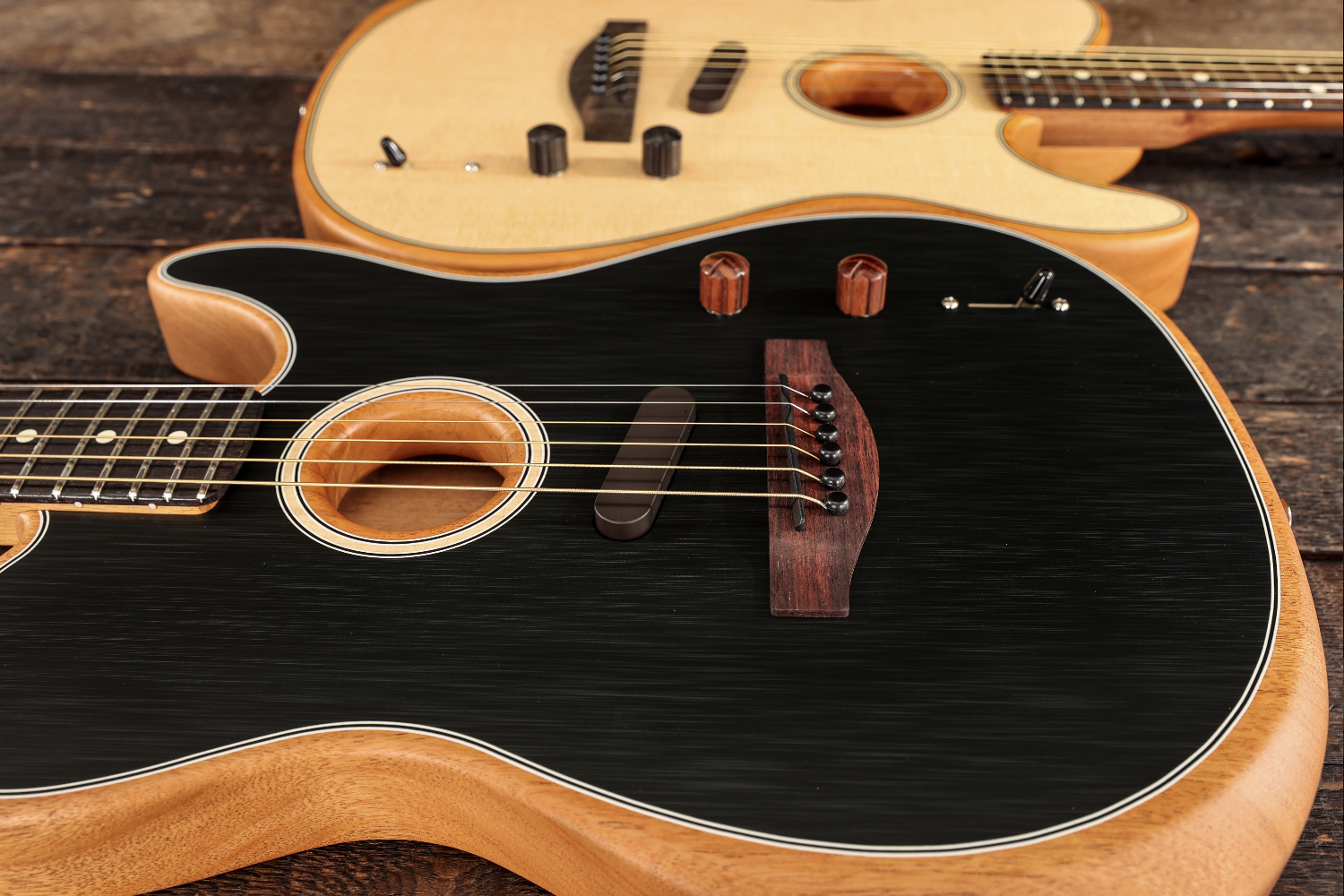 One of the coolest things about the Fender American Acoustasonic Tele is its 3-pickup system. Designed by Fender and Fishman, this comprises a Tim Shaw-designed noiseless N4 single-coil for authentic Fender electric tones free of hum, a Fishman under-saddle piezo system that captures the acoustic string vibrations, and an internal body sensor that adds warmth and “woodiness” into the sonic mix. These elements all work together to optimise the guitar’s natural sound and deliver the curated collection of electric/acoustic voices.

The Fender Acoustasonic Player Tele features the same noiseless N4 single-coil and Fishman piezo system, but does not have the body sensor. This means that it loses a little bit of the harmonic breadth of its US-crafted cousin, particularly when it comes to the straight acoustic sounds. But with the same body construction, there’s not much of an audible difference. 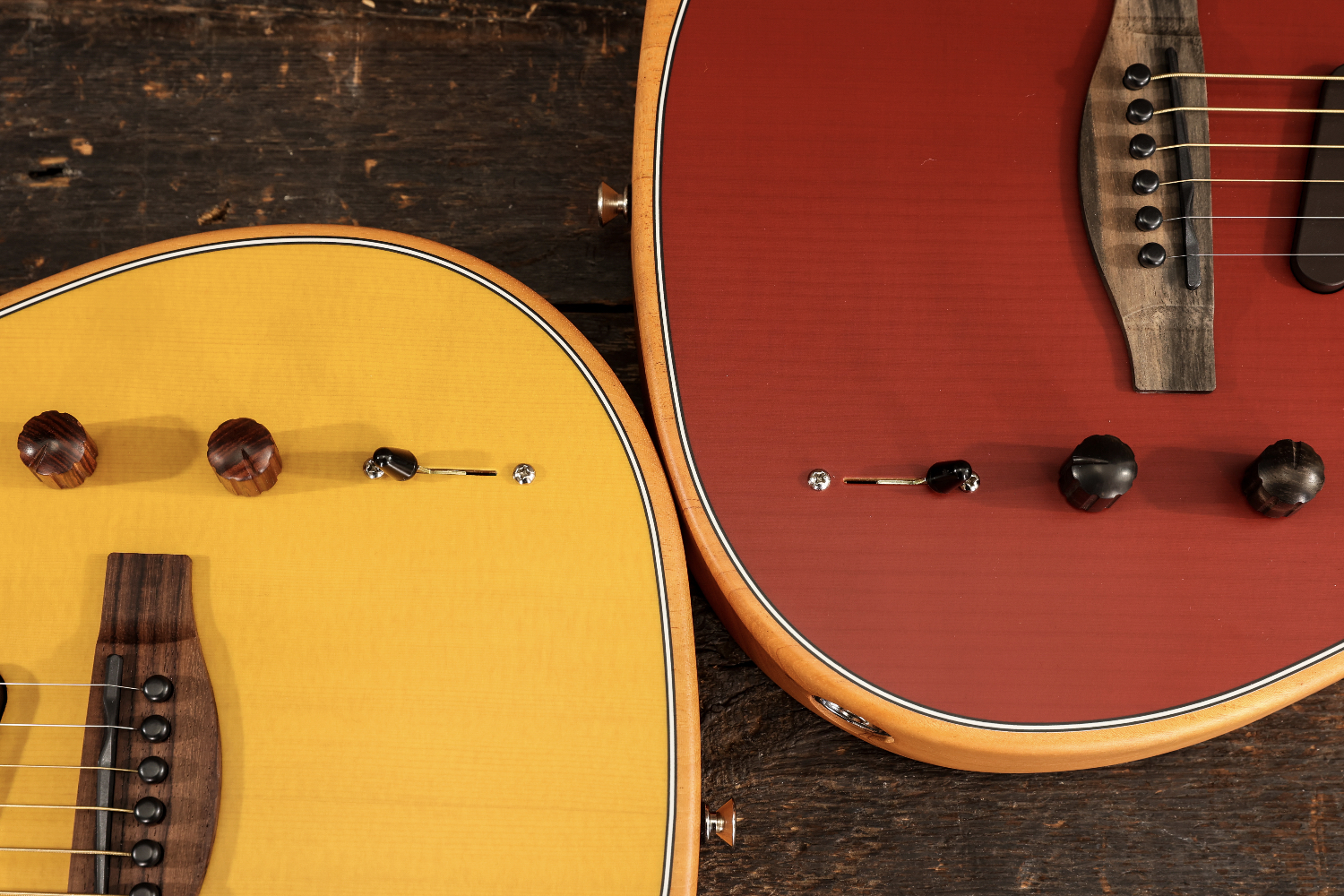 If you’re after immense flexibility from a single instrument, the Fender American Acoustasonic is very hard to beat, but the Player still gives you plenty to play with. And with its ‘Blend’ knob, just like the ‘Mod’ knob on the USA Acoustasonic, you can still achieve the unique hybrid sounds that make the Acoustasonic formula so intriguing. 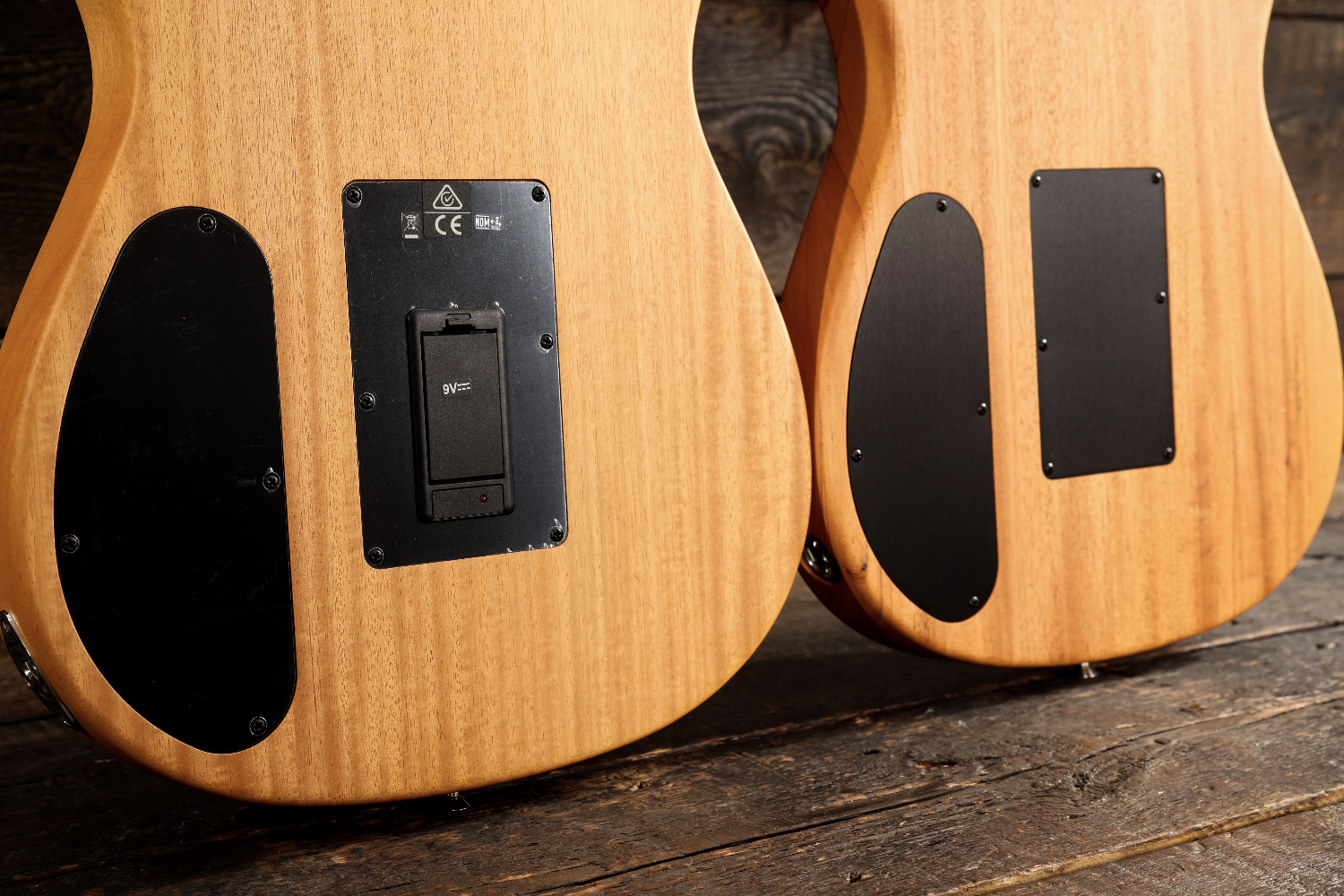 While some might say that the rechargeable lithium battery in the American Acoustasonic Telecaster is superior to the traditional 9V battery that powers the Mexican model, it’s actually down to preference when you think about it. Both options offer around 20 hours of playing time, so if you’re a live performer, one charge/battery can cover a few gigs — no sweat!

The advantage of the American Acoustasonic’s lithium battery is that it’s built into the guitar and can easily be recharged via micro USB. There’s no need to buy a new battery every time it runs out of charge like with the Acoustasonic Player. However, if you do run out of charge mid-way through a set, you’re kind of screwed! With the Mexican Acoustasonic, you can just grab a new battery and quickly swap it out. But if you’re not keen on buying a new 9V battery every time it goes flat, you can always get two rechargeable ones that you interchange. Simple. 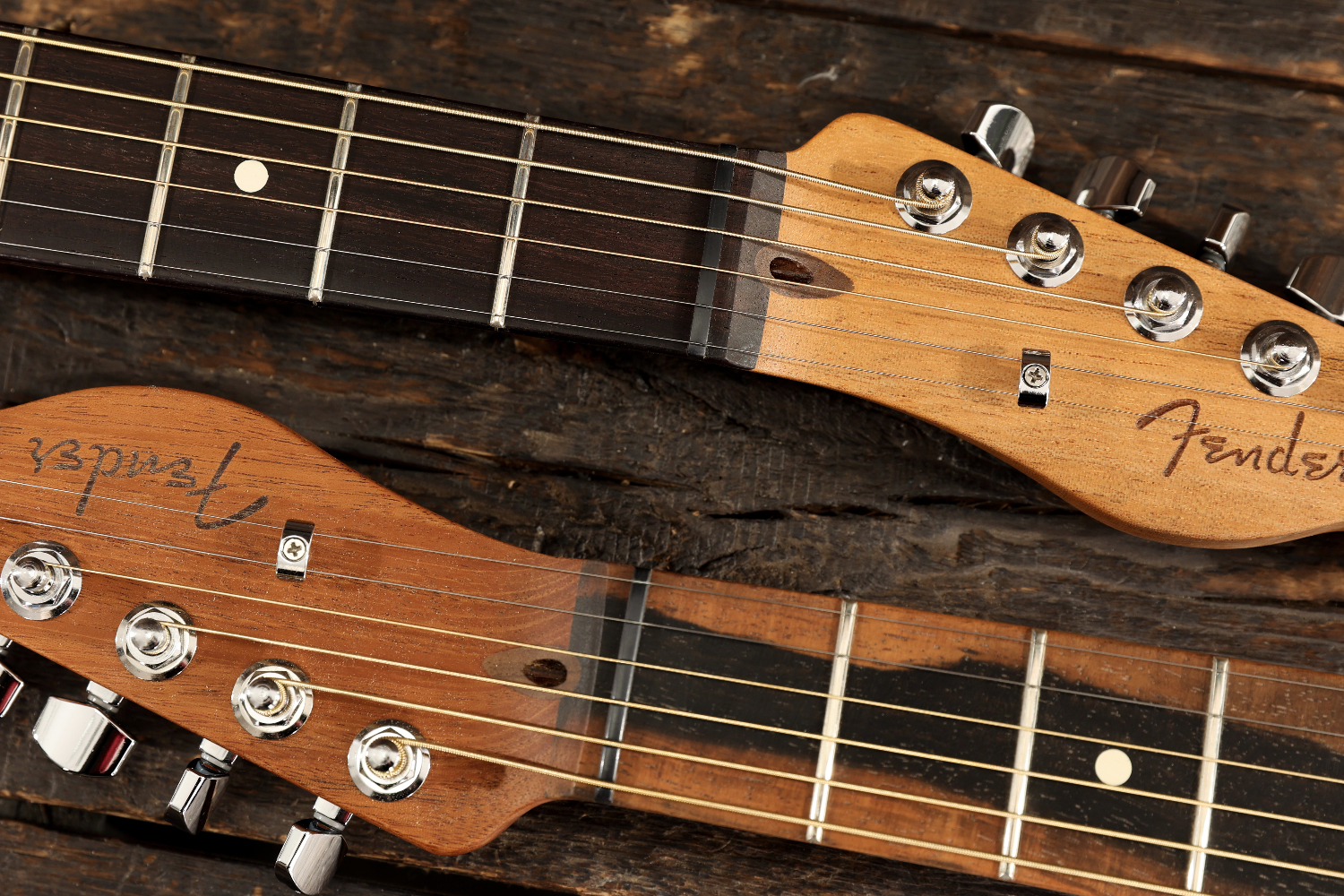 Like we’ve said, both guitars are practically indistinguishable from a construction point of view. But one minor difference they have is their fingerboard materials. The USA model boasts an Ebony fretboard, while the Acoustasonic Player comes with a Rosewood fingerboard. One isn’t better than the other though. This is, again, all down to preference both physically and sonically.

Ebony is considered a more “exotic” material that’s typically reserved for high-end guitars. It can feature a mesmerising grain, just like on the lower guitar neck pictured above, and is known to possess brighter tonal qualities. That doesn’t take anything away from Rosewood though. This is a widely-used timber used on instruments both affordable and expensive, often featuring a more consistently-dark grain. Some players also like the warmth it adds too.

Which Guitar is Better? 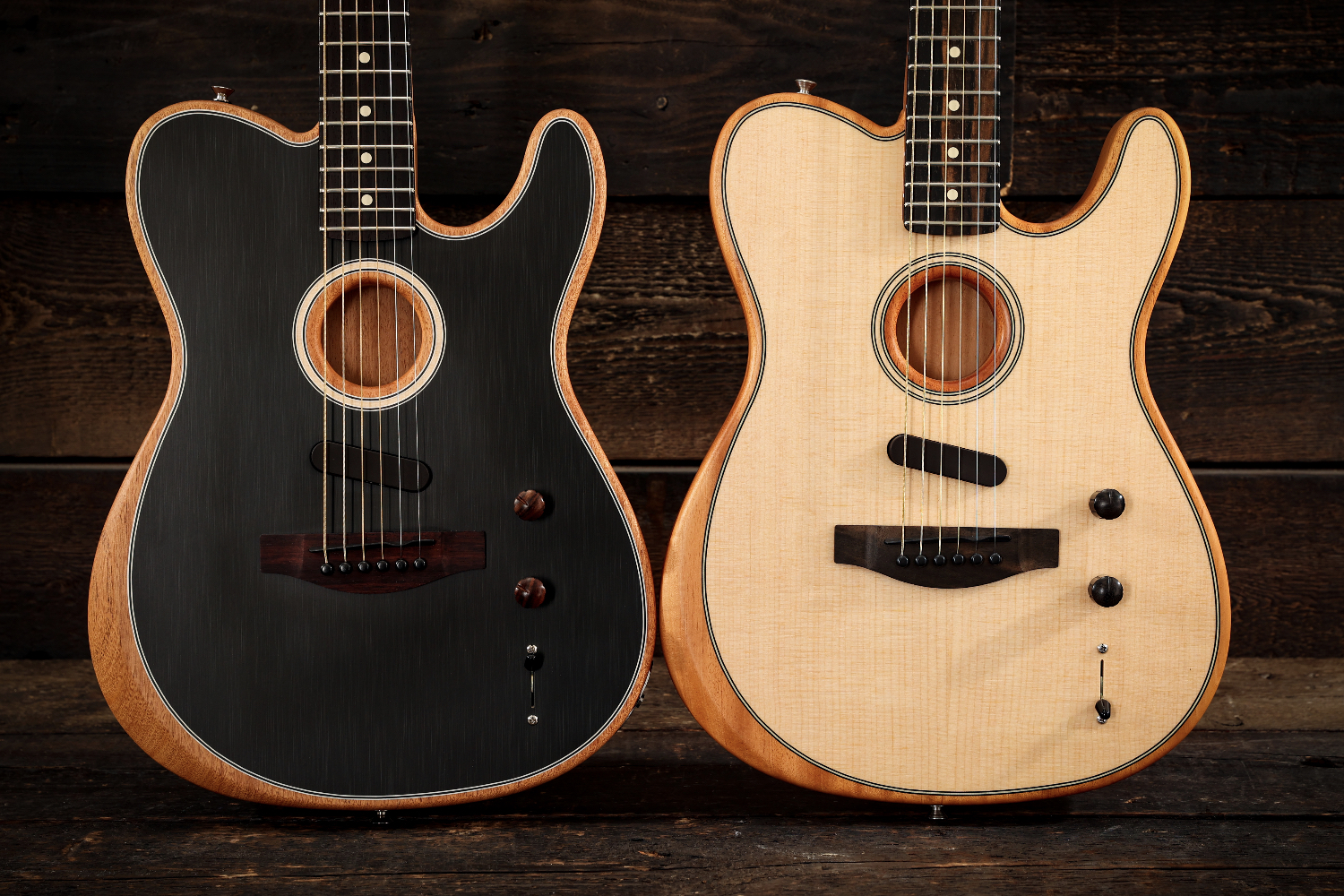 There really isn’t much to choose between Fender’s American and Player Acoustasonic Telecaster guitars. They are incredibly similar in terms of build and feel, with only some slight electronic drawbacks on the Player giving the USA model more appeal for musicians who prioritise versatility. But is the American Acoustasonic worth the extra money? Hard to say.

If you’re a guitarist who has pondered the idea of owning an Acoustasonic for a while, but has been put off by the cost of finding that out, then the new Acoustasonic Player is a mouth-watering prospect. For the money, it’s a scintillating choice for the singer-songwriter who wants the freedom to change in and out of electric and acoustic sounds on the fly — with everything in between.

If craftsmanship or quality is a concern, it’s worth noting that Fender’s Acoustasonic Player guitars are built in their brand new, state-of-the-art acoustic factory — right next-door to the world-renowned electric factory on their Ensenada campus. Mexican-made Fenders have come a long way, and the Acoustasonic Player is proof of that.

We hope that this blog has made it easy to discern the differences between Fender’s American and Player Acoustasonic guitars. However, no amount of words can truly convey how these new models sound in action — so check out our Andertons TV video below!

Interested in finding out more about music gear and expanding your knowledge? Click here to view all of our Labs articles! For more information on Fender guitars, check out our related articles: